It takes an lot of timber to build a house. I naïvely discovered this as the first huge pile disappeared and we had to mill more and more.

Our house at Delhi Village was designed to be eco-friendly without being slavish about it. It seemed that having a Lucas mill would mean that we could use our own milled timber wherever possible. Luckily it also takes a long time to do something a bit different, such as rammed earth feature walls, so there was time to get the timber dry enough between truckloads. I also fancied the idea of not using pine. I finally gave in when our long suffering builder looked at the twisted remains of macrocarpa stacks and begged for a packet of nice straight pine for purlins.

But that was near the end and we were wiser and considerably poorer by then. At the beginning we needed to get a building consent to use macrocarpa for framing so we started with a double garage.

The timber used for framing exterior walls has to meet durability and strength standards. Durability is easy enough because NZS 3602:2003 allows heart cypress to be used as exterior wall framing and cladding because it is deemed to be equivalent to H3 standard for durable use above ground.

Structural strength is not so straightforward. Because we were not using machine stress graded structural timber MSG8, we had to build as if it was a weaker timber MSG6 equivalent. This meant that studs had to be closer and because the garage end walls were gable walls, and required 150 mm by 50 mm framing, the result was something you could not drive a bulldozer through.

Delhi Village is a greenish co-housing project on the Whanganui town boundary.The 12 hectare site has 10 owners, each with their own title, giving them a small housing section and shared ownership of the common land and facilities. Houses are grouped together leaving the bulk of the land available for grazing, forestry and retired areas. Having houses close together has created a pleasant village atmosphere and is more efficient for reticulating services.

There are minimal rules. Owners must participate in a management company, and houses must have composting toilets and efficient water appliances. Relocated houses are acceptable as a good form of recycling and you can paint them whatever garish colour you like.Working bees are not compulsory but in practice are well attended.

The social aspects are a work in progress with some households yet to move on site. So far everyone is enjoying the benefits and fun of good neighbours and shared projects.

Eying my depleted framing stacks when it came time to start the house I decided to test the timber and see if I could get it assessed as MSG8 equivalent. This would mean we could space studs at 600 mm centres instead of 400 mm and would use much less timber.
I took about a dozen pieces to Waverley Sawmills where Peter Martin and team duly tortured each one on their bending test machine. The results showed that the macrocarpa was equivalent to, and in most cases a lot stiffer, than MSG8. Interestingly the results were somewhat counter-intuitive. The dark red heavy pieces turned out to deflect more than some of the paler lighter timber.

However, in order to use it for the house I needed to do an audited test sample of at least 35 pieces. Even then there was some doubt if it would be acceptable becasue the timber came from several different locations. In the end my engineer cleverly pointed out that because the macrocarpa was over-sawn at 105 mm by 55 mm and 155 mm by 55 mm, it could be used as if it was MSG8 because NZS 3602 allows different spacing for different dimensions. This worked up until the 200 mm dimension after which the extra was insufficient to meet the code in that way. So that is what we did.

A few other things made building with sawn timber more difficult. Grading to remove large knots and splits resulted in varying lengths. Therefore the builders needed to be more selective rather than just grabbing the next piece in the packet as they would with radiata pine. Minor bows and crooks also had to be allowed for and this all took extra time.

In addition, almost all fittings are designed to be used with standard building dimensions for dressed pine, so fitting a joist hanger meant chiselling to fit. We did develop a few other solutions to problems as they arose. Rob from Rob O’Keeffe Joiners came up with beautiful macrocarpa window and door jambs that could slide to fit the wall thickness. 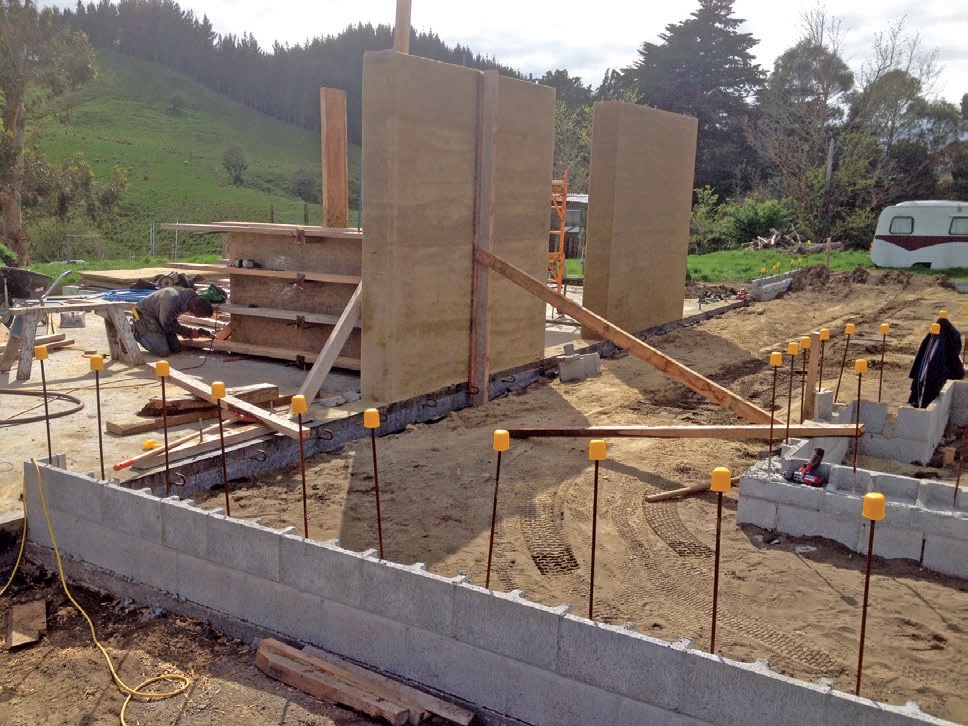 The house has some rammed earth walls. These are mainly for aesthetics but they also add additional thermal mass and help to modify humidity. We were advised that rammed earth is the most technically difficult earth building method and we should go for something easier such as blocks or adobe. They were right about it being difficult but with initial advice and loaned equipment from Kapiti based earth-builder Cliff Glass we eventually succeeded. I would not want to do it again, but we love the finished product.

Cladding, decking and internal joinery provided a chance to try out a range of different species. I had a lot of silver wattle Acacia dealbata which needed a home so we used it for flooring, stairs and panelling. It is possibly a bit soft for flooring in a high use area but as an upstairs floor it is fine. It is quite variable with pink white tones and you have to accept that sort of variation. A small amount of Acacia mearnsii found a home as a kitchen island bench-top. It has beautiful grain and colour and I wish I had more.

Windows and doors ended up as composites. Rob was nervous about using macrocarpa for sills which are most at risk from rot in exposed places so we compromised and used treated pine for these. But we used macrocarpa for jambs and cedar for the double glazed sashes because of its stability. Using wood like this is more expensive than aluminium joinery but is very thermally efficient and adds a warm look and feel.

I really wanted to get some blackwood into the house but only had short lengths from early thinnings from our own forest. These became the centre-piece of composite posts sandwiched between two long bits of macrocarpa, a sort of liquorice allsorts effect that works rather well and is very strong.

Board and batten cladding is a well-worn route although running weather grooves on a bench-saw took some time. Similar with decking that we lightly sanded, oiled and laid on damp proof membrane strips. If I was to do it all again I would probably still use macrocarpa for framing but to save builder time I would pre-select to remove faults, get it gauged and sort to length.

The house has composting toilets, water efficient appliances and solar water heating, with a Pyroclassic fire to heat water and radiators. All lights are LEDs and power costs are very low. It is easy living and cosy but the thing I most love about the house is all the wood. 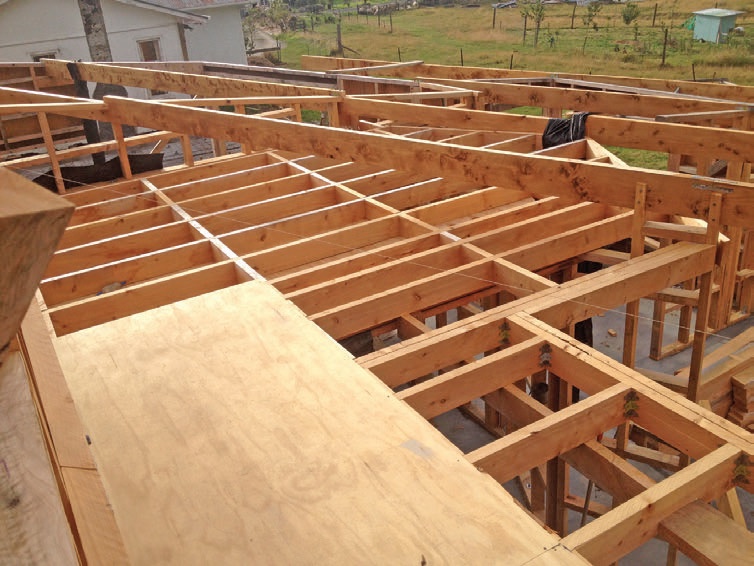 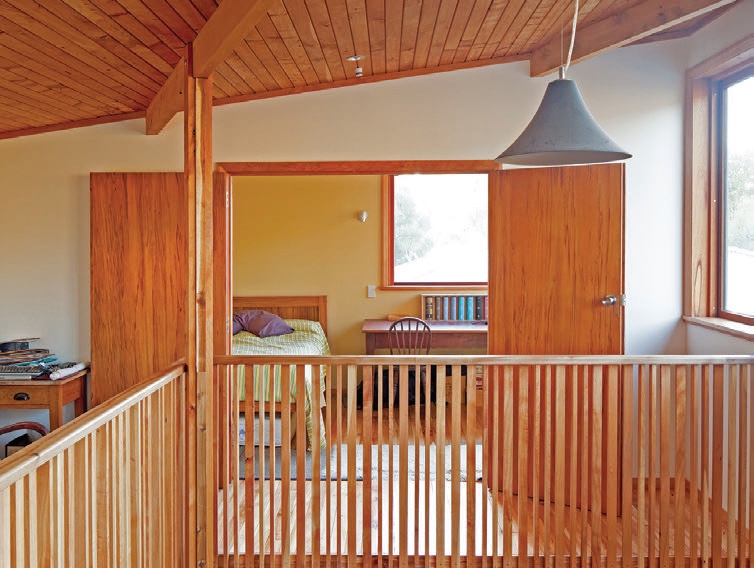 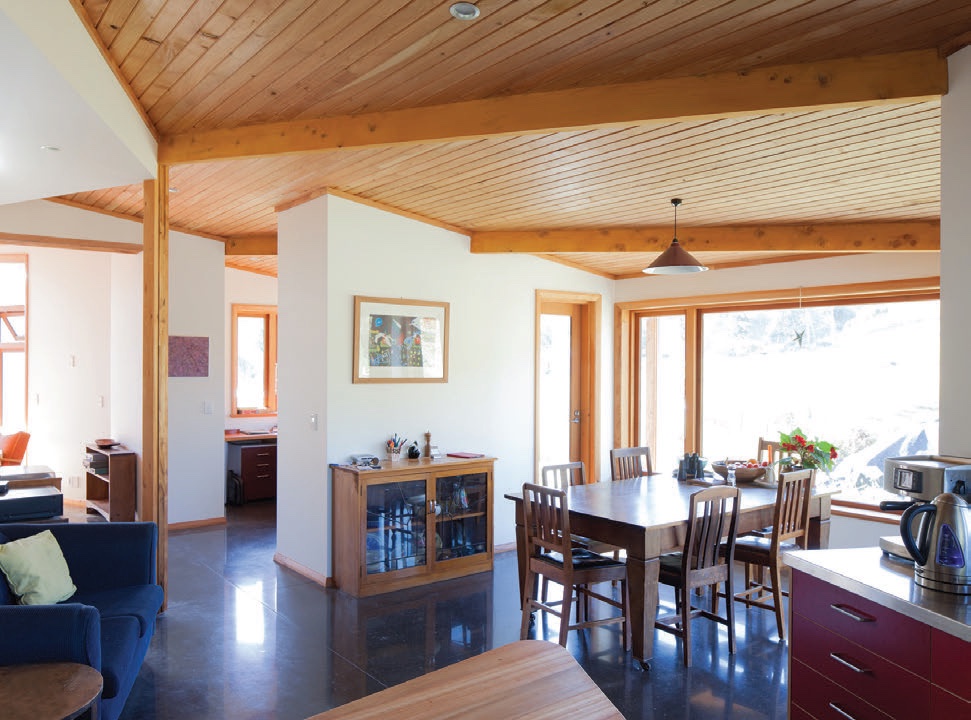