For 80 conference attendees, the boat trip out on to Queen Charlotte Sound was going to be a highlight. So there was relief that the forecast of fairly dire weather did not fully eventuate. It was overcast with showers, but I for one did not have to don my raincoat once.

We started from Picton with a cruise around the shores of the predator-proofed Kaipupu Point Wildlife Sanctuary, and the wharves of the Shakespeare Bay port. Local DOC boss, Roy Grose, told us of the on-going efforts to rid the sanctuary of pests, and how the port is the deepest export berth in the country, where logs can be loaded 24 hours a day, seven days a week. It is also a destination of huge cruise ships, one of which berthed during the day.

From the port we started our own cruise up the Sound, the main commentary presented by Andrew Macalistair, the founding chairman and operations manager of the Marlborough Sounds Restoration Trust. He told us how the Sound was farmed until the middle of the 1900s, with regular burning to control the regeneration of woody species. From then, however, farming became less profitable and as properties were abandoned, the likes of gorse, manuka and native shrub species began to take over. During this period, there was a window of opportunity for pines to establish, resulting in a presence ranging from scattered trees to dense forests.

Even though the increasing cover of other woody species has greatly restricted further conifer spread, those early invaders are large, obvious and not wanted. Therefore the major work of the Marlborough Sounds Restoration Trust has been to kill the pines, and the resulting dead grey trees were obvious on nearly all slopes. Andrew explained how his teams track them down in the thick regenerating bush using GPS, and then drill and fill with a metsulfuron brew. Within months the trees turn a bright orange, explained as autumn colours to northern hemisphere visitors, before losing their needles. Felling is avoided, as this creates light wells in the surrounding vegetation, encouraging another burst of conifer regeneration.

First of the pine killers

Our first landfall was at Hitaua Bay in the Tory Channel, where long-time bach owner, Graeme Moore and his caretaker, Len Dunwoodie, were the first to experiment with killing standing pines in the 1980s. We spent over an hour walking his tracks amongst the spars of dead trees, where native species are once again taking over, aided by considerable planting of podocarps and the likes of kauri.

Until these tall forest species emerge, the conifers have acted as the top tier forest trees, which are an important part of our forest ecosystems, providing roosting and singing sites for pigeons and bellbirds and homes for invertebrates and reptiles. Weta and geckos love the sanctuary offered under the bark plates of old- man radiata. Needless to say, there was animated talk as to why such introduced trees cannot remain until their native counterparts mature.

Across from the Moore property was a slope where a planted radiata forest had recently been felled. Not only had the profitability been very marginal, apparently more than one logging crew had gone broke here, but the regeneration of wildings was as thick as hairs on a cat’s back over much of the area, and none of the trials looking at managing such dense stands had proved to be worthwhile.

Our second landfall was at Motuara Island, a small Department of Conservation sanctuary not far from Ship’s Cove. As historian, Pete Jerram, ably described, this area ‘reeks of history’, being the first landing spot of James Cook in 1770. On the island Cook proclaimed sovereignty of New Zealand and he subsequently returned three times to this favoured place. He was also the first European to observe, become involved in and describe Maori cultural life.

While half our group climbed to the top of the island and had close up encounters with robins, bellbirds and saddlebacks, the others went over to Ship’s Cove. Here, apart from the historic monuments, remnants of the original forest cover still stand.

As we headed back up the Sound, the rain set in, but that was of no concern as we sipped hot drinks and listened to Greg Steward speaking about Scion’s new work on native species ‘in the right sites, the growth of species such as kauri, totara and kahikatea can be as fast as radiata’, and ‘Captain’ David Dillon describing the colourful history of Farnham Forest, a rugged peninsula planted by British aviator and sailor, Sir Francis Chichester, 80 years ago.

A final word of thanks must go to the boat and crew. They not only served us a magnificent lunch, featuring ham carved off the bone, but there were hot drinks and nibbles available at all times. Most importantly, they used their local mana to keep the worst of the weather at bay.

Nick Ledgard is a long-time farm forester who retired recently as a scientist with Scion, where he had a special interest in wilding trees. 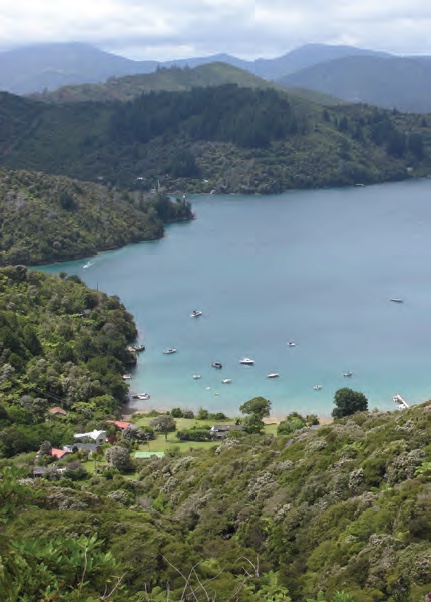 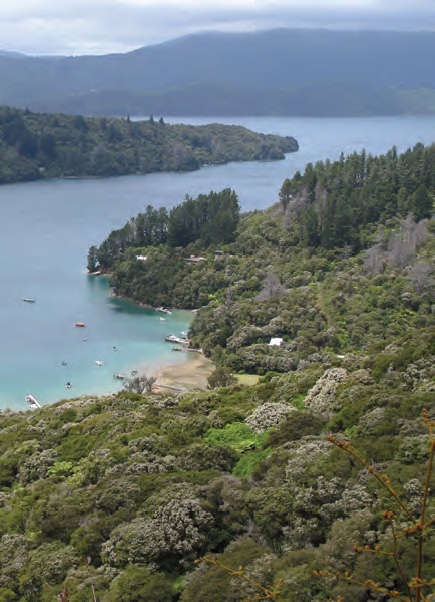