The importance of riparian zones has come under focus recently as the state of freshwater quality in our streams and rivers is declining in many areas. Rural streams where banks have been cleared of vegetation will produce eroding bank edges, murky waters and plenty of algae or weeds in the channel. These effects are mainly caused by sediment and nutrients from the surrounding catchment either by overland flow or infiltration into groundwater which eventually feeds into surface waterways.

Sediment input causes many changes to a waterway and has an effect on the fish and invertebrates which live in streams and rivers. During heavy rains soil washes into waterways from landslips with surface flooding and bank edges eroded by flood flows or stock trampling. When enough of this sediment settles on the bed of the stream or river it can smother the cracks and crevices where native fish prefer to hide during the day, and reduce the quality of food for fish and invertebrate life.

Sediment bound nutrients, especially phosphorous, are also carried into the water and then stored in bottom sediments. This may remain relatively inert in these sediments for some time, but phosphorous can become suspended again in the water by turbulent flows or by vigorous fish activity. When this happens you can get algal blooms, especially in summer.

If the land is in native bush, the riparian zone is an area which has a greater diversity of plants. This is due to the variety and changeability of the habitat, from the stream edge which is inundated by water, through an area which experiences occasional flooding, to the outer zone where the canopy is closed and soil moisture is more constant.

Nitrogen in the form of nitrates is a soluble nutrient, mainly entering waterways by infiltration as water percolates through the soil. It originates mainly from fertilisers and stock urine. Nitrogen is measured in water as nitrates and ammonia, which can sometimes reach high levels under extreme loads.

Ammonia is present in sediment-rich streams with a lot of organic matter present and its presence is noted by the smell released when stirring sediments at the bottom of streams. Plants love nutrients, so when there is a plentiful supply in the water and water temperatures are increased from lack of shading and reduced flows in summer, algae grow in abundance and long strings can be seen moving in the flow.

The problem with a lot of algae is that it looks and can smell awful. When it grows thick and long it starts to decay in the water, sucking the oxygen out of the stream, sometimes to levels in which fish cannot survive. With more nutrients there is also a greater chance of cyanobacterial mats forming and some of these can be toxic. To try and combat some of these effects on our rivers and streams, fencing off and planting riparian zones is worthwhile and provides other useful functions such as increasing biodiversity, shelter and shade to adjoining land.

The riparian zone increases the roughness of the land, helping to support the buffer region against incoming nutrients, soil erosion and flood flows from upstream. This is evident when comparing a grazed stream to an unplanted, fenced stream edge where the pasture has been left to grow. Grass grows over areas which have been eroded from trampling to provide stability, and the friction from vegetation slows the water flow and widens the channel, which also reduces erosion downstream during flash floods. When planting a range of grasses, sedges and trees, the variety of rooting depths and above ground vegetation densities further stabilises the soil.

A variety of planted species also increases the ability of the riparian zone to filter nutrients. With a greater density at ground level, grasses are good at trapping surface sediment which then is bound to soil particles. Soluble nutrients, which travel down through the soil into groundwater, are intercepted by a range of root depths. Deeply rooting plants are important filters in the riparian zone, as well as playing a role in stabilising banks.

When first planting the buffer zone, growing plants will be more effective at removing nutrient going into the stream, compared to later stage growth where vegetation reaches its maximum height. For this reason it could be beneficial to grow production trees such as fruit and nut trees in areas where leaching is more of a problem, or alternatively manage the native forest by cutting back to encourage sustained growth.

Once established and riparian planting is in place with a range of native species providing nectar, seeds and fruits, biodiversity will increase with a greater range of insects and birds. These then provide supplementary food for native fish in the form of spiders and beetles which fall into the water, along with incoming plant growth from bird-introduced seed. The more bird-friendly species planted along stream edges, the greater the likelihood of bird corridors establishing, bringing native birds from remnant bush into these areas.

In the lower reaches of streams and rivers are the spawning grounds of trout and many native fish species which are the basis of whitebait. Fish prefer to lay their eggs on the banks of streams and rivers, either out of the water among stony ground or in vegetation where the environment is continually damp and away from the strongest flows which can wash eggs away.

It is therefore important to protect riparian margins to maintain fish numbers, with the canopy provided by forested banks creating an even climate without the temperature extremes which can reduce egg survival. The natural flow fluctuations of the river should also be maintained to prevent eggs being washed away and to regulate the natural cycle of spawning. Riparian protection helps this normalisation of flows.

Riparian zones should be fenced off in areas where stock can get access. Generally a width of 10 metres on each side of a stream is recommended with greater widths of 20 metres or more for large rivers or where land is steeply sloping. The greater the area planted, the better the riparian zone will function.

When it comes to planting the area initially, the hardiest species should be planted to ensure maximum survival rates. In some areas frost can damage newly planted trees and many sloping stream banks contain frost pockets. Planting flax, cabbage tree, karamu, manuka and kanuka tends to give the best start to planted zones. This is especially where minimal maintenance is applied, such as spraying pasture grasses and weeds which would otherwise smother young plants.

Deciding whether to spray before planting or not depends on time and money. Plants will grow faster without the competition from pasture grasses and will have a better survival rate. If left to grow wild, some plants may need weed clearance over the first two or three years to prevent being swamped by grass. Planting at spaces of one to one-and-a-half metres apart will create canopy formation more quickly, which is especially beneficial when problem weeds like blackberry are present. Planting stream bank edges with grass and sedge species will provide a good buffer to reduce erosion at the stream edge. Leaving a few metres here free of taller shrubs to focus on lower growing species means they will not be shaded out and they are more suited to the wet habitat.

Species can be added or may appear naturally as the forested zone develops. Planting should be between May and September depending on soil moisture at the site. Earlier is better in drought-prone areas for roots to establish deep in the soil before the seasons change and warm dry conditions become the norm.

Sheltered habitats will be created as the canopy develops and grasses line the edge of the stream with fronds which hang over and shade the bank margins. These habitats help protect from predators, and eventually woody debris will fall into the stream, with water banking up behind to form pools which fish tend to shelter in away from swifter flows.

The canopy will reduce temperatures by intercepting solar radiation directly on to the water, limiting algal growth, and reducing the extreme environments that open waters are subjected to. Soil humus will also build up under the canopy, increasing the soil water-holding capacity of the bank edge with slower release times to the waterway. There are many benefits with a more stable system being created.

The more riparian planting which can be implemented from the catchment origin to the sea, the better the overall result for stability, water quality and habitat creation. Providing buffering, especially in the smaller headwater streams, is very important for water quality as it is harder to remedy problems downstream than it is at the source due to the nature of flowing water. If you are planning on planting out your section of stream, try getting your neighbours interested and involved.

Andrea Ravenscroft is a propagator at the Taupo Native Plant Nursery, which supports major riparian planting projects throughout New Zealand and has branches in South Auckland, Taupo and Lake Brunner. Andrea has recently completed a postgraduate research project on stream ecology. 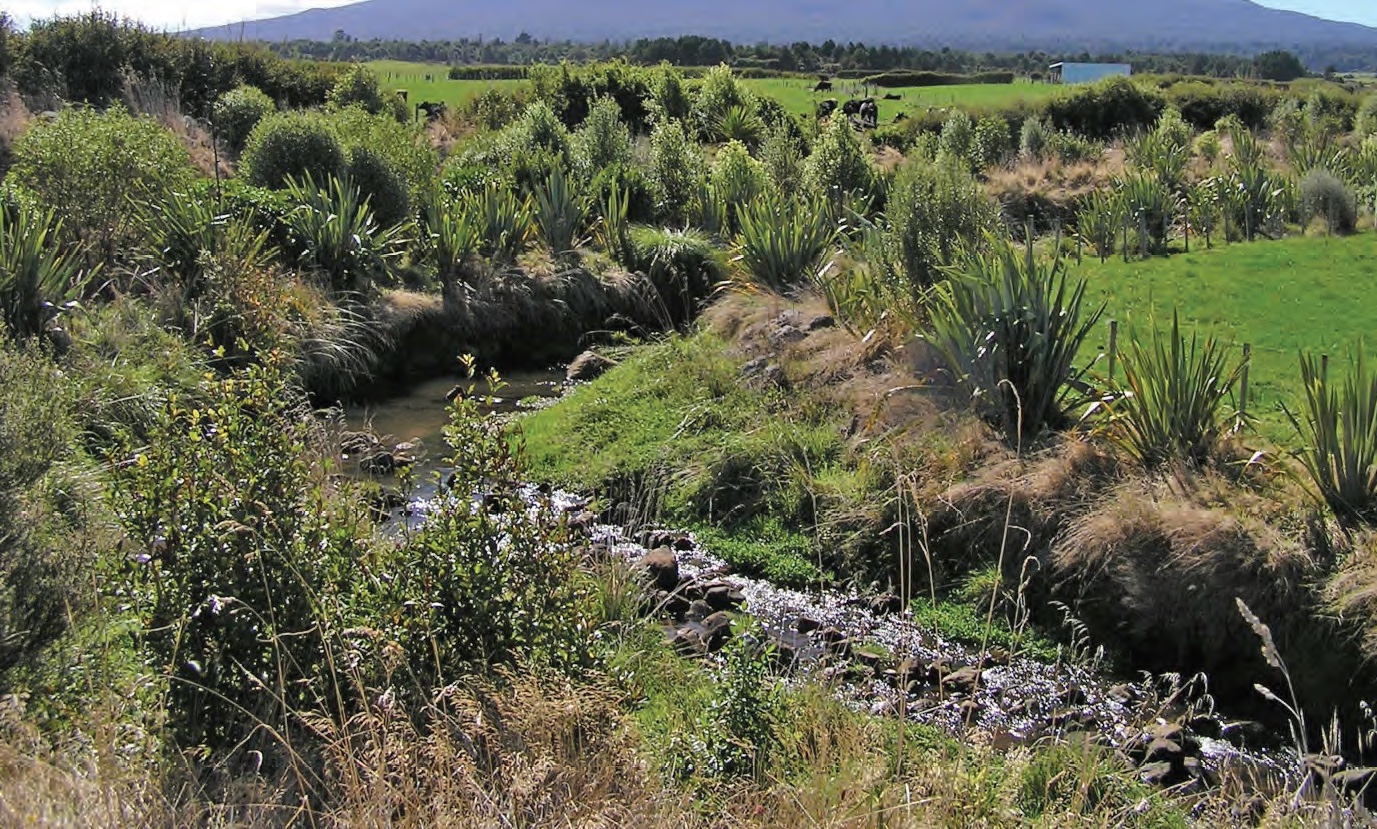