Optimising chemical use in radiata nurseries

The establishment and growth of new radiata pine stands is strongly influenced by the quality of the seedling stock. Research by Mike Menzies and others of Scion relating seedling physiology and morphology to survival and growth in the plantation led to the establishment of a set of standards for seedling quality in the late 1980s. However, due to funding constraints, no work has been undertaken in the following years to assess how these standards are achieved in radiata pine nurseries. In this article we present results from a trial examining the effects of fertiliser and fungicide application rates on seedling growth in the nursery.

Chemical use in nurseries

The aim of nursery managers is to ensure that a given crop of seedlings reaches the required standards such as root collar diameter, root development and foliage colour. The simplest approach is to use chemicals to protect the crop from pathogens and pests while applying fertilisers to help accelerate seedling development during spring and summer.

The type and amounts of products used vary significantly, depending on the problems that a nursery faces. These include limited availability of particular nutrients, chronic problems with insects such as onion thrips, or persistent fungal outbreaks causing root rot and terminal crook. Nursery managers have developed strategies using pesticides and fungicides to combat these problems, often involving the use of different combinations in rotation to help prevent the development of resistance in insect pests and fungal pathogens.

However, due to the lack of independent research on nursery management, there has been no critical comparisons of the success of the different methods used. As a result we do not know if there if there are opportunities to optimise chemical use in nurseries by using less of them while still avoiding negative effects on growth and crop fitness. 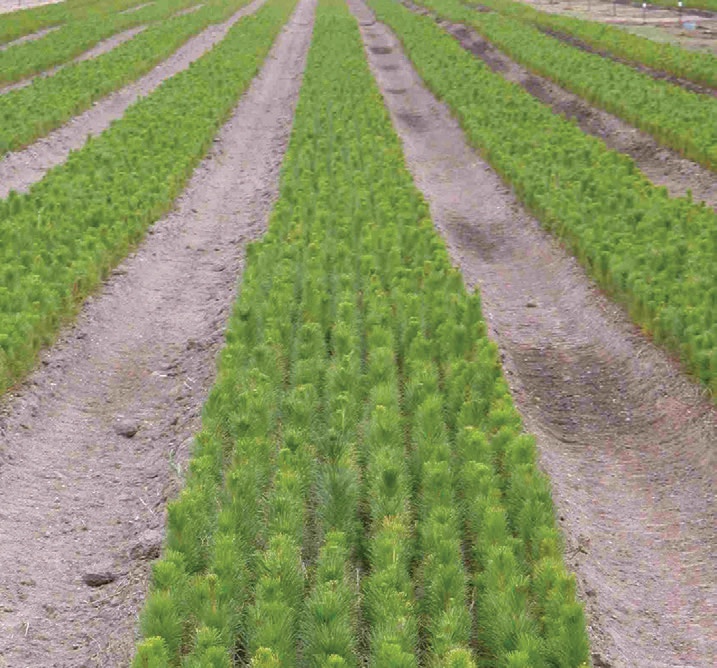 In 2009 a trial was established with bare root radiata pine seedlings at Te Ngae nursery, Rotorua. Availability of nitrogen and magnesium are problems for seedling nutrition at Te Ngae, and fungicide is applied regularly to prevent outbreaks of terminal crook and seedling mortality due to Phytophthora.

Throughout development, the seedlings in the trial area were treated with one of the following options –

The fertiliser and fungicide treatments were mixed to produce nine different treatment combinations. A further set of seedlings received no applications of fertiliser or fungicide during the life of the trial.

The effects of the treatments on seedling development were monitored for nine months until the seedlings were removed for planting. Root collar diameters were measured on 2,160 seedlings to assess the relative differences between the treatments at the end of the time in the nursery. The mortality rates, root collar diameters and height increments of 2,600 seedlings taken from the nursery trial were used to compare effects of the treatments on seedling performance after a year under plantation conditions without any further fertiliser or fungicide.

Fertiliser and fungicide application rates did not influence the post-nursery growth as measured by increments of both root collar diameter and height.

What does this mean?

The immediate results from the nursery trial and the examination of the seedlings a year after planting show that there is an opportunity to reduce the use of chemicals without compromising seedling quality and performance in the plantation. Decreased fungicide use has the potential to improve the quality of the seedlings, and also appears to be related to improved survival rates in the field. It is possible that this may be due to the effect of fungicides on the presence and activity of beneficial ectomycorrhizal fungi that form associations with radiata seedlings in the nursery and after planting.

Research conducted in parallel with the assessments of seedling performance showed that the most beneficial ectomycorrhizal fungi are also the most susceptible to fungicide. The seedlings that had the greatest exposure to fungicides possessed fewer of the more beneficial associations.

Limitations to the results

An important limitation to the wider applicability of these results is that they were produced from one set of seedlings at a single nursery. The seedlings treated with either no fungicide or decreased fungicide applications performed well and remained free of disease. However, this may not be the case in another year with different weather conditions, or at other nurseries where managers deal with different diseases and disease incident levels.

This work indicates that fungicide applications may have some negative effects for seedling quality and no benefits for post-nursery performance, although the insurance they provide against disease outbreaks is very important. Therefore it is apparent that further work must be done.

We think that a revaluation of the standards set in the 1980s would be useful to the pursuit of better, more productive plantations. We recommend the incorporation of a standard around the density and type of ectomycorrhizal associations present on a radiata seedling. This is of particular importance, as work conducted at Te Ngae nursery and other locations around the world demonstrate that some ectomycorrhizal species provide significantly more benefits to the host seedling in terms of nutrient and water uptake than others.

This concept is not new. In the criteria set out by Mike Menzies and others, the importance of mycorrhizal associations is highlighted. Now we have the capability to effectively integrate this important measure of seedling quality into standard practice. For this and other improvements to happen, the New Zealand nursery and forestry industries must become more active in funding and setting research directions. Otherwise the sector will continue to forfeit the benefits that could be gained from these advances.

Simeon Smaill and Katrin Walbert are researchers for Scion