Trees in the working landscape A no-fuss approach gets results

The Farm Forestry Model is all about how trees and farming operations can work hand-in-hand to enhance overall productivity and sustainability. It is important to remember, however, that this does not need to be complicated. It does not take a lot of fuss or drama to make trees part of your working landscape. But the benefits gained from adding another revenue stream to your cash flow and enhancing animal welfare can be significant.

Chris Sime of Outram, Otago, is a good example of a farmer who takes a pragmatic approach to the farm forestry mix. He grew up on the 685 hectare property that he and his wife Jo farm, and was happy to return after completing a farm management degree at Lincoln University in 1989.

Chris says the land was originally covered in manuka scrub before his grandfather and father developed the farm in 1955. An investor with spare cash, who did not know anything about farming, asked his grandfather to look the place over. They saw the potential and bought 3,000 acres for a pound an acre, and Chris’s father set about developing the property. In 1984 1,300 acres were subdivided off leaving the 1,700 acre property.

Today the farm predominantly runs sheep, with 2,800 Perendale ewes and a small beef herd of 12 cows. Chris describes the soils as not too bad, with a clay base and about fifteen centimetres of topsoil on the lower parts of the property with a schist rock base further up. 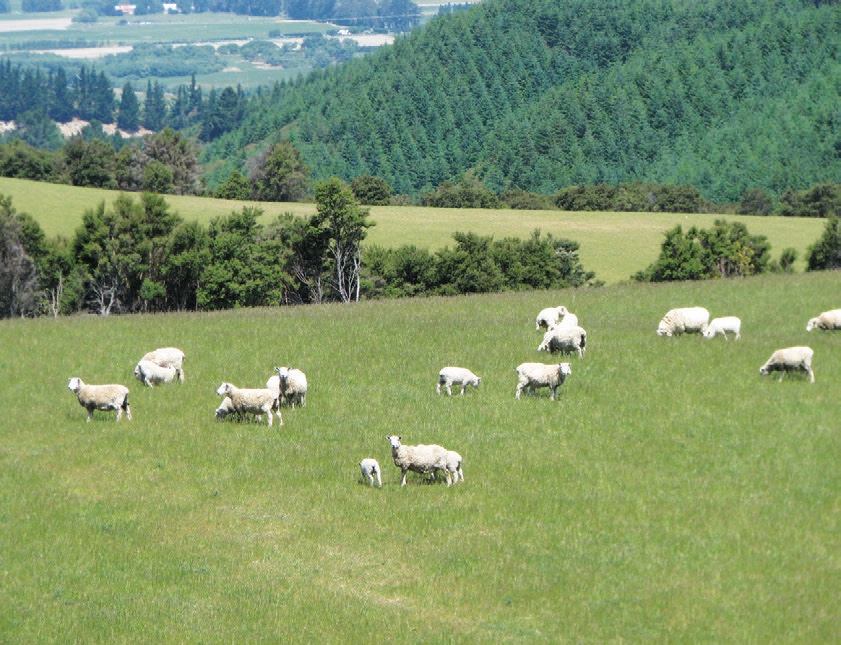 Most of the ridges run north-south. The prevailing north-westerly wind does most damage and the southerly brings rain. The property rises from 300 metres above sea level up to 360 metres at the back of the farm and the view out over the Taieri looks straight into the teeth of the southerly. However with a lot of shelter in the gullies wind is not a major issue.

Annual rainfall averages 750 mm and temperatures get up to 25°C degrees in summer and around 12°C degrees in winter. There are about with about 10 days of frost a year and three or four snow days where the snow usually thaws by the afternoon.

Summer droughts seem to be more prevalent in recent years although the farm has avoided the worst of recent droughts that affected south and north Otago. They are lucky with a lot of manuka – where there is a lot of manuka it is higher rainfall.

Trees on the farm

Forestry and sawmilling run in the family’s blood. Chris’s grandfather was a sawmiller at Tapanui. His father is quite skilled at cutting trees down as he started planting trees in 1955 and has continued since then. Trees on the Sime property are planted for profit, to get a return from unused or low production areas on the farm, and for shelter.

The interest Chris has in planting trees was triggered at a young age. His father has always been a member of the NZFFA, and Chris recalls going on a field trip with his parents to Jolyn and Enny Manning’s property in Alexandra. He was in the third form and took along a friend from school. His parents thought he was probably not taking much interest, but coming home in the car he asked, if he planted some trees on the place, could he have them for himself. His father said he could but he would not guarantee anything if the farm got sold. When Chris left school in 1986 the first thing he did was plant a block of trees.

Overall since 1955 there have been around 22 plantings, mainly in radiata pine with just one block of Douglas fir. The total number of hectares with trees is not known precisely. ‘You just plant an area and know that 2,200 trees went in, or there are 1,300 in that block down there.’

In the earlier days Chris would scrub cut and prepare the site manually, then burn it and plant it out. Now they get a digger in to root rake it. They plant 1,300 stems a hectare and thin down to a final stocking of 350 to 400 a hectare.

They plant trees in the gullies where they would not get much production from grazing. Fighting gorse is a constant battle in this area, but rather than pouring money and chemicals into keeping it down, Chris says it makes more sense to put the digger in, root rake it and plant it out. He says getting an extra fence on the edge of the paddocks can be good for the stock, with more edges for break fencing.

‘You can spend a lot of money spraying gorse but it just keeps coming back. You might as well put trees on it because they will suppress the gorse and then you get something out of it in the end. Once the canopy fills in the gorse disappears, although it does come back when you harvest if you do not replant.’

A block each year

His main aim is to get 30 blocks of trees so that theoretically, he will have one block a year to harvest. They therefore try to plant every year, usually in August. The planting decision often depends on whether it has been a dry summer. If that is the case they simply hold over planting until the next season, rather than risk a poor take or ending up with poor stock at the end of a planting season.

However in 1994 they had a lot of trees left over so had to find different places to put them. In addition to the main planting they ended up planting five other little bits rather than let them go to waste.

Radiata grows well on the property and at this stage there is no intention to plant more Douglas fir or other species. The neighbours have planted Douglas fir at high altitudes but also plant radiata around the same level as the Simes. Although Douglas fir is popular with sawmillers Chris reckons the slower growth rate means he probably would not see a return. 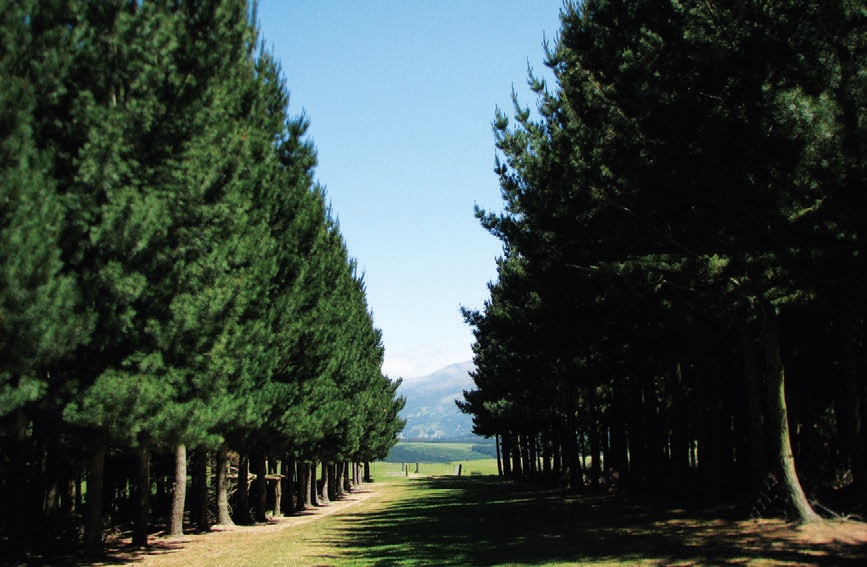 The first trees were harvested in the early 1990s, with Chris and his father felling a small block behind the woolshed and doing all the work themselves. The prices were not too bad and it was all K grade.

Now contractors do the job. Harvesting, all ground based, is carried out during a dry period to avoid the need for roading. Chris uses local forestry consultant Dave Pearson to gauge the state of the market, sell the logs and organise crews.

Chris admits some of the earlier blocks probably had not been tended as well as they might have been, but they were still worth it. For example, a block harvested last autumn had not been well managed. However the small 24-year-old trees had good tight rings and went to the local market as posts, poles and smaller logs, rather than export. Having a post market close by on the Taieri, as well as Young Brothers sawmill and treatment plant in Mosgiel, is a major advantage.

He assumes the tree is ready to harvest if you give a tree a hug and you cannot touch your fingers. Down south they can grow good fat logs – but with knots due to the big branches.

They are not going to get rich from the trees, but it is not a bad income. Some blocks are just one or two hectares but for every 400 trees in one of these blocks, at $100 a tree means $40,000. As a rule of thumb they can harvest when the trees are 27 to 28 years old and if they drop down a block of trees every year that is quite a nice addition to the farm income.

So does he replant? The answer is a definite yes, and Chris considers that he would be a fool not to. The second crop is faster because the soil has the right mycorrhizae along with all the goodies from the roots of the trees in the soil.

With just over 360 hectares as effective grazing out of the total 685, Chris says that leaves around 320 hectares with potential for forestry. He is interested in calculating at what point tree planting would enable the farm to be carbon neutral, and looking at government incentives for tree planting

Apart from the obvious shelter belts, there is not a lot planting purely for shade or shelter for the stock. But Chris notes that the trick is to do it cunningly. It is another facet of his no-fuss approach.

When he puts in his trees they are protected by temporary fencing, which is taken out when the trees are established. It is not long before the sheep are going in under the shade, particularly during the summer dry period. Mustering is not a problem Chris just uses two dogs, and says the Perendales are a pretty cooperative lot. With the likelihood of more dry summers he is now looking into poplars as fodder feed during droughts. 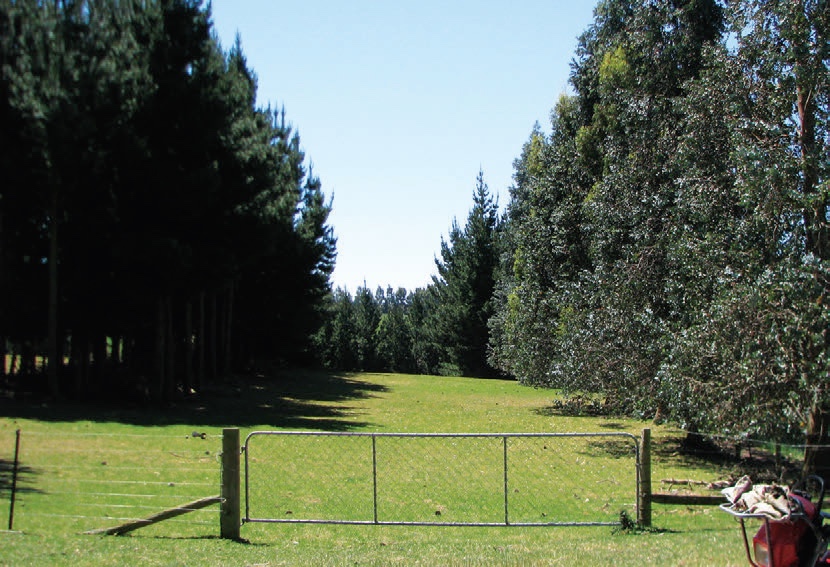