The foliage of poplar and willow trees has been used by farmers for many years to feed livestock during drought at various places throughout New Zealand. The fodder has been supplied by natural leaf fall from trees which is referred to as pennies from heaven by at least one prominent tree enthusiast. In addition, fodder is made available by pollarding trees used to conserve soil on pastoral hill country or of trees grown in blocks grown specifically for fodder. Special purpose browse blocks are also an option where the animals browse the trees in situ.

Willows and poplars can tolerate regular defoliation and quickly regenerate to grow future supplementary fodder. Several pollarded willows that have been harvested every two or three years on farms since the early 1980s are still growing as vigorously today as they were 20 years ago. Farmers have noticed that the pollarded trees recover enough to provide effective soil conservation with no obvious erosion near these trees, and supply stock shade until the next pruning.

A mature willow tree with about five years of regrowth can feed up to 30 cows for a day. When supplemented with hay, one large tree can feed about 60 cows. In a recent study in Hawke’s Bay, regrowth from a willow tree pollarded by complete canopy removal five years earlier, produced 29.3 kg of dry matter, with 30 per cent edible foliage.

Branch debris left around trees after pollarding can be a nuisance, providing a protective habitat for weeds to germinate and potentially hindering mustering of livestock. Poplar and willow limbs tend to degrade very slowly, especially the heartwood. Some animals have been reported as becoming trapped in non-decayed pruning debris. 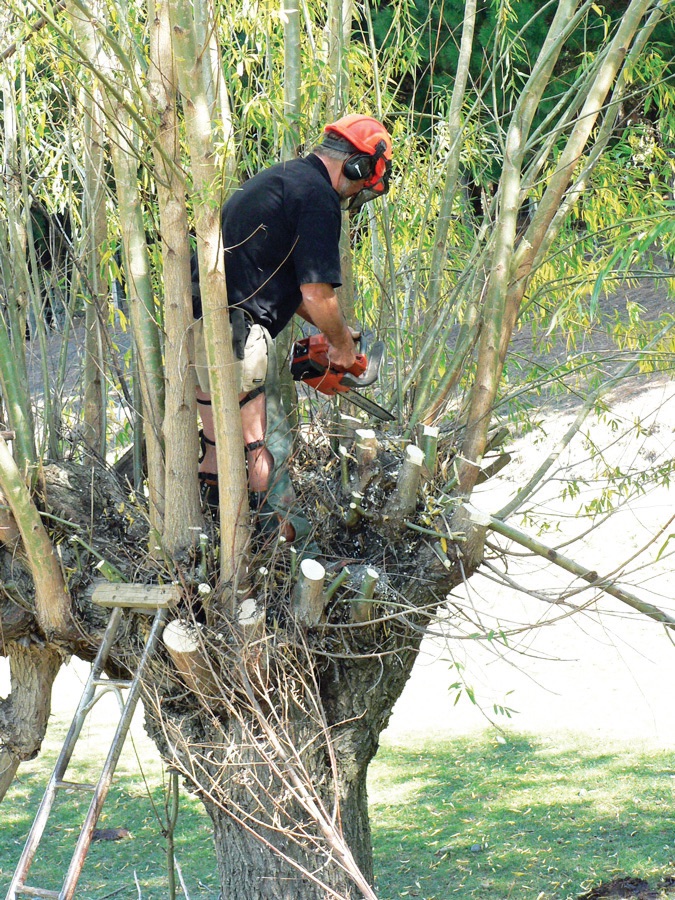 If the tree is on a reasonably accessible site, the debris can be collected and used as firewood. Willow and poplar make perfectly acceptable firewood, if not left too long on the ground, and will burn as well as any other timber in an efficient wood burner.

Cattle will strip leaves and bark from willows and poplars and eat stems up to 10 mm in diameter. Sheep tend to consume leaves and thinner stems up to five millimetres in diameter but do not generally strip much of the bark.

When to harvest poplars

The decision to harvest poplars needs to be made reasonably early in the season, before the trees start shedding their leaves in response to the drier conditions. In general, farmers in regions prone to summer drought harvest poplars first, using willows later.

Some farmers have created a dedicated fodder block on flat or gently sloping land with a good water supply. This ensures that the fodder retains high nutritive value during drought, can be harvested easily and quickly, and the debris is more easily removed afterwards. This is a specialist use of these tree species beyond soil conservation.

High density browse-block plantings range from 2,000 to 10,000 stems per hectare, more in some regions, and are browsed directly by livestock. There is no cut-and-drop, or cut-and-carry of the material. The blocks are generally sited on unproductive, wet and rush-infested areas of a property, and are fenced.

Wet areas are usually catchments for surrounding hills and the accumulated nutrients should be sufficient to fertilise the browse block. Being wet, they will probably also contain resident clover and lotus, legumes that tend to thrive under browse block management and supply high quality feed along with the tree fodder. Blocks may also be grown on highly productive alluvial flats prone to flooding. Once a block is established the soil becomes drier and the pasture understorey improves and may become legume-rich.

Willow is preferred for browse blocks because it has more thin stems than poplar. This results in trees carrying more leaf material and finer laterals − the browse fodder. Stock generally keeps the shoot height to a manageable level, reducing the need to trim shoots mechanically.

Blocks are established by planting cuttings 40 to 50 cm in length and 15 to 30 mm in diameter during late winter. It is possible to browse them lightly in the following autumn with sheep or cattle to reduce vertical tree growth and control the pasture understorey growth. In late autumn the tree shoots should be tidied by cutting them with a scrub-saw or similar equipment to leave stumps 15 to 30 cm above the ground. Using cattle to lower the tree growth level may be an alternative option.

In the winter after planting, sheep grazing should be continued through to early spring to control the pasture growth. It may then be practical to lightly graze the established block once or twice when the new season’s shoots have developed to a reasonable size. Early spring grass growth should be reduced as much as possible to minimise the risk of too much dead pasture matter later in the season.

During the third year onwards, it is recommended to operate the same system. This is to browse with cattle or sheep in autumn, then give sheep access in the winter and early spring, and perhaps once or twice during spring.The aim is to maximise the benefit of the browse system for supplying feed in summer or autumn drought.

If the browse block is managed well, it may persist for 10 to 15 years and possibly longer. This depends on the soil type, the tree clone planted, the management it receives, weather patterns and prevalence of pests and diseases.

The feed quality of intact leaves of poplar and willow in summer and autumn is usually similar to that of pasture during the same period, particularly during drought, and they are rich in trace elements such as zinc. Green leaves of poplar and willow have a higher nutritive value than edible forage, arbitrarily comprising leaves and stems up to five millimetres in diameter, but livestock will always consume some stem.

The organic matter digestibility of poplar and willow edible forage is similar to or greater than that of normal summer pastures at between 55 and 65 per cent. It is greater than the organic matter digestibility of pastures subject to drought. The crude protein content of poplar and willow forage during summer and autumn is often 15 to 18 per cent, which is within the range for summer pasture. The digestibility of edible tree forage declines during the growing season, mainly because of maturing of the thin stems from spring to autumn.

A significant difference between the chemical composition of poplar and willow edible forage and summer pasture is the presence of secondary chemicals, mainly condensed tannins and phenolic glycosides. The concentration of total secondary chemicals in the tree forages is five to 10 times greater than in pasture. The benefits for livestock of these chemicals in poplar and willow edible forage remain to be determined.

Grant Douglas is a scientist at AgResearch and Ian McIvor a scientist Plant and Food Research.