Confucius said: ‘A wise man is one who plants a tree knowing he may never sit in its shade’. I know it sounds a bit philosophical, a bit heavy, a bit touchy-feely but I still reckon Confucius was right on the money. Until you grasp this concept you will always be the one looking over the fence admiring the neighbour’s foresight and hard work.

Dairy farmers have had a roasting in the media in recent years over our supposedly reckless disregard for clean water and plundering of the planet in general. Apparently, while we are flat-out bowling over the nation’s pine forests as if they were paddocks of thistles, our cows strip graze the banks of pristine trout spawning streams and in turn belch methane into the heavens. Consequently, the likes of Fish and Game hate us, and why not? Anyone creeping around at 4 am under the cover of darkness must be up to something sinister.

No matter how much of a hard-nosed, staunch dairy farmer you may be, to rebut all this criticism as propaganda dreamed up by the looney green fringe seems to be wearing pretty thin in Wellington. The fall-out will eventually be big changes to what we currently class as the norm, I am sure of that.

What does not make the headlines are those dairy farmers busy planting a maple here, a couple of cabbage trees there. Dreaming that one day they might just get a chance to sit in its shade, pour a cup from the thermos and look out over the cut silage as it wilts on one of those balmy summer days. Which, after that somewhat longwinded preamble brings me to the reason for putting pen to paper.

I have been asked by the powers that be, NZFFA heavy Nick Seymour, to write an article on how we have incorporated trees into our dairy operation. Most of the plantings have been a roaring success thanks to advice picked up at various farm forestry field days over the years, with dumb mistakes kept to a minimum. View the following as earning some brownie points for the dairy industry ? we certainly need some.

My wife Madelein, our young children and I lease a 90 hectare family dairy farm in the Reporoa Valley, half-way between Rotorua and Taupo. The farm is rolling pumice country with the odd steep sideling. We are 350 metres above sea level and the average rainfall is 1,200 mm. Due to the free draining nature of the soil there is often a modest dry spell in February and March. The winters are well known for thick pea soup fog and heavy white frosts. That said, the winters are not as harsh as they use to be, thanks to global warming. 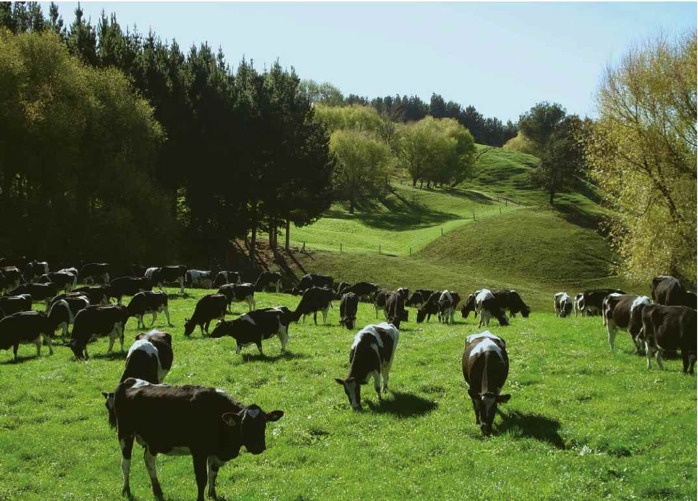 The trees on the farm are there to do a number of different jobs. But the main reason for tree planting is to create a place where we can milk cows in a park-like setting. We believe if the right tree is put in the right place, milk production need not be compromised, the children have the farm as an adventure playground and in general, its just a nicer place to be for man and beast alike.

Nevertheless, we still run a business and want to derive as much profit out of the farm as possible. Having plenty of trees around the place and making money need not be mutually exclusive.

The property was originally purchased by my grandparents as a Lands and Survey ballot farm after World War II. The block was split up into six large treeless paddocks and my grandparents lived in a corrugated iron extension to the implement shed for the first winter and milked through a walk-through cowshed. In 1975 my folks took over and began planting trees with vigour for shelter and aesthetics.

Being free, and simple to grow from poles, poplars and willows were planted in all the wet gullies and spaced out along fence lines. With their fast growth rates they were a wonderful success – for the first 20 years anyway. Over the last five years we have been progressively removing them, as they love dropping branches in strong winds and flattening fence lines. It was only a matter of time before a cow would be hit. Our advice to anyone starting with a clean slate would be to go ahead and plant a few poplars and willows, as they give quick attractive shade for stock, but complement these with slower growing, longer lived trees. Never mix the two in a plantation as they are the neighbours from hell and will be far too pushy and domineering for your well-behaved ornamentals. Most of our old poplars have been the heavy branching Yunnanensis and Flevo clones. Any new plantings have been the narrower crowned, wind sturdy Veronese and Crowsnest. 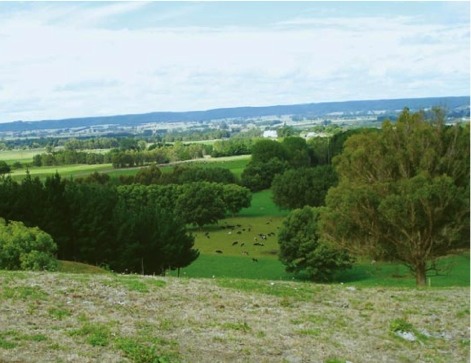 On a dairy farm there are three locations we feel are suitable to establish trees with minimal effect on grass production. They are boggy gully bottoms, short steep sidelings and adjacent to fence lines. If we happened to have a flat farm with a centre-pivot irrigator doing laps then we would need to re-think this strategy.

We have two of these gully systems which dissect the farm. While they are not swampy enough for cows to get stuck in, the cows take pleasure wallowing up to their udders in the mud. This does not help the somatic cell count nor provide for pleasant swimming downstream.

These areas were originally fenced off and planted in poplar and willow, which of course thrived. The fences on each side of the gully did not survive. These trees are progressively being logged and sent off as chip and the revenue from the wood usually covers the cost of extraction and transport.

Fill them up with natives

Our new focus on these riparian areas is to fill them up with natives. Although a little more effort is needed to get clear of long grass, once established they will provide years of trouble-free re-vegetation. All of the plants are sourced from the local Taupo Native Plant Nursery with strict instructions to provide nothing flash, just a mix of idiot-proof pioneer species. 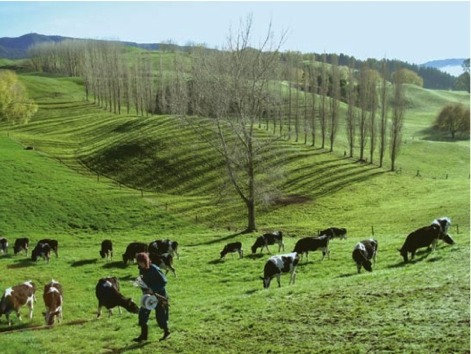 With little moisture and hungry rabbits, it was with apprehension that we inspected the aftermath of this summer big dry. To our surprise there were very few casualties. On the sides of the gullies we had put in cabbage trees, pittosporum, coprosma, mingimingi, kanuka, flax and in the very wet bottom native carex grass. We think what helped get them through was the follow-up glyphosate release spray carefully done in November.

I hate blackberry. I do not mind scoffing a few on the side of the road but it must be the scourge of all farm foresters, but we do not have gorse. Whenever areas are fenced off and retired from grazing, invasive weeds need to be controlled. If we did not handgun them once a year the area would revert to wall-to-wall blackberry in no time.

The largest of these is a three hectare paddock. Over the years we have tried all sorts of things to make this thistle infested hillside pay its way – blasting it with paraquat each summer then farming but mostly chasing Cashgora goats. This could have been a bonanza if there was ever such a thing as a goat proof fence.

The sensible but somewhat delayed decision was made to plant radiata. These trees are now 13 years old, showing good health and high growth rates as you would expect on an ex-dairy farm site. We have even managed to do the pruning and thinning on time. This was in contrast to our previous silvicultural regime on another radiata block planted in 1984. The pruning here was done late and only to a height that you could reach from the front end loader bucket of a tractor. Naturally, come harvest time there was a lot of pulp. 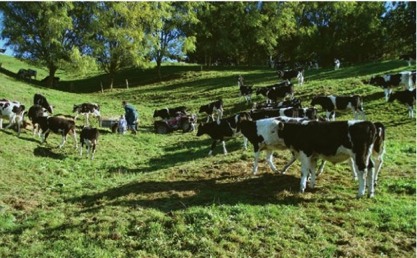 In the last 10 years our focus has been away from pine to more special purpose timbers deeming it necessary to grow trees that will potentially yield higher value logs. This is partly due to the small half hectare size of each block. We also wanted to establish a mix of timber trees over the farm for the visual effect.

If you have ever had the chance to stand under the towering redwoods on the northern Californian coast, or for that matter even some of the fine specimens in Rotorua’s Whakarewarewa Forest, they are certainly something to behold. With significant investment already underway in establishing commercial forests in New Zealand it may well be a future winner. The stand we have is now five years old, planted at 800 stems per hectare and will be pruned and thinned as a managed forest. If, however, in 35 years time they are beginning to soar above the surrounding farmland the jury is still out on whether they will be felled or not.

Tasmanian blackwoods on the other hand have been planted solely for the timber, reputed to be only second to black walnut for furniture making. Yes they do require a bit of cunning to keep them growing straight. They do hate the wind but no-one would call managing them boring. 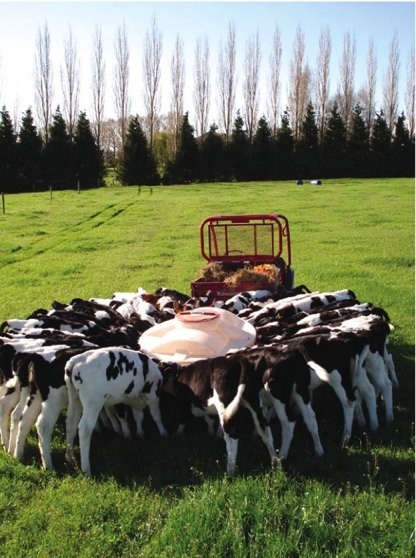 Larch is another favourite tree of ours. Recently we have planted a hillside with the Japanese variety. In time these will provide a magnificent backdrop of autumn colour to the duck pond. The potential market for the timber is unknown although we will still prune them up to four metres to allow access underneath.

Every dairy farm in New Zealand has fence lines so I see this as an easy location to start your tree planting ? and at $35,000 a hectare land does not need to be retired. All cows enjoy shade so you want enough, but not too much. If you have only one tree, on a stinking hot day they will all try and park up hard underneath it and spoil the pasture. On the other hand we do not want the farm resembling a kiwifruit orchard. We try and have shade for half the herd at any one time, which for us means three or four trees per fence line.

It is important that all trees have a pruning lift up to approximately three metres for a number of reasons. Pruning allows more light to penetrate beneath the tree, which maximises pasture growth while creating shade that moves as the sun travels. It also allows clearance for machinery so that mowing and spraying can be done right up to the base. Low hanging branches are also a curse during cow mating when tail paint is missing.

As far as species go, being in Reporoa we prefer deciduous trees to reduce the time frost lingers on the ground during the winter. While the farm still has many large poplars and willows along the fence lines, we are taking advantage of this existing shade by interplanting with slower growing but more resilient species.

We have planted a mix of oak grown from acorns scavenged from Eastwoodhill, London plane with its lovely mottled trunk, together with liquidamber, Norwegian black maple and North American red maple for their assortment of colour. Even the odd walnut tree has been thrown in for good measure.

For animals and the environment

So that in a nutshell is why and how we have continued planting areas of the farm for the benefit of the animals, the environment and the children. In the drought last summer when the farm was brown and crispy, having a few green trees around certainly helped keep the spirits up.

Editor’s note: Just to reinforce the fact that trees and profitable dairying can go hand in hand, Madelein and Kyle won the Central Plateau Sharemilker of the Year Competition in 2006. They are members of the Taupo and Districts Branch of the NZFFA.