After forest harvesting there is inevitably material left behind that is not suitable for selling as logs. Rather than leave this to rot, there are a number of ways in which these residues can be used, depending on the volumes available.

The amount of material that is left as residue varies with a number of factors such as crop quality, terrain, harvesting system, logmaking system and log markets. The material includes branches and sometimes deformed sections of stem wood, as well as the off-cuts created during the process of cutting stem lengths into logs. 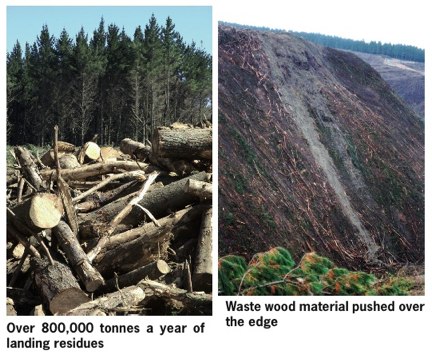 It is usually left in two main locations ? at the landing where the stems are cut into logs, and on the cutover where the trees are felled and often de-limbed. Some of this material is more accessible than others and therefore more useable. The most likely material to be easy accessible is what is left on or around the logging landings.

Landing residues can lead to problems with the stability of the landing edge if they, and the water run-off from the landing, are not managed well. The results can be significant earth movement, usually towards waterways at the bottom of the slope. Therefore one option to consider is to collect the material and use it for something worthwhile, instead of pushing the waste wood material over the edge of the landing.

It is possible to predict to some extent the amount of residue that can be expected from a harvesting operation, and once the amount is known, it is possible to start planning what might be viable in terms of managing or using this material.

The amounts of residue that are likely to occur have been studied in a number of production forest situations. The volumes from woodlot operations are likely to be similar, and possibly higher, depending on the nature of the block. For example, if there are a lot of boundaries and edge trees the branch residue volumes will increase.

Residues are estimated as a percentage of the extracted volume. Typically the total extracted log volume is likely to be in the range of 500 to 700 cubic metres per hectare, but less than 500 for areas such as Canterbury and Westland. The volume to be extracted should be known before the operation starts.

The percentages of waste likely to be produced from forest harvesting are presented in the table at the bottom of the page.

There are a number of uses for residues, assuming that there is sufficient to warrant doing something with them. These can be as simple as domestic firewood, or as complicated as ending up as fuel for an electricity generation plant in a rural distributed power generation system.

Grinding or chipping the wood

There are also non fuel uses to consider. For example, if the material is chipped or ground up using a hogger it can be used as animal bedding. Hoggers come in a range of sizes, and while some can go from landing to landing quite easily, others are better suited to having the residue brought to them. The size of the machine required will be dictated by the composition of the material as well as the size of the pile. Smaller machines are not suitable for large chunks of wood such as stumps or large diameter off-cuts.

Larger machines capable of processing all of the residues need a significant amount of wood before it is economically viable for them to be brought in. The larger machines can process 25 to 30 tonnes an hour, and need at least a week’s work at a site. However, this can be made up of several smaller lots of material from a variety of sites that are trucked to the hogger at a central point.

Once hogged, the material needs to be taken to a point of use or sale. Transport is best done in specialist chip trucks that have sufficient volume for the truck to maximise its payload. Transport costs can contribute a significant part of the delivered cost of a fuel, and making sure that the site is easily accessible for large heavy vehicles is essential to avoid expensive delays associated with trucks getting stuck.

Depending on the site and the residues it is possible to produce a hogged residue at a cost of $24 to $26 per green tonne with approximately 55% moisture content. This cost is made up of a variety of machine costs, typically an excavator to gather and pile the residues, the cost of the hogger and then the loader which is
required to get the residues on to the truck.

Depending on the nature of the site, there may have to be a two-stage operation, involving trucking the residues a short distance to the hogger. Hoggers are often quite large, up to 30 tonnes, and need a solid surface and room to work in, with space for piles of unprocessed material at one end and a pile of processed material at the other.

If the hogged logging residue is clean with a minimum of dirt contamination it is suitable for use as a bio-energy fuel. Its value to a user will be dictated by local supply and demand and the transport distance to the point of use.

Delivered costs assuming a transport distance of 70km could be in the range of $38 to $42 a tonne. However, if the material is to be used as a fuel, its value lies its energy not its weight, and the energy content of the green wood is likely to be in the order of 8.5 gigajoules a tonne at 50% moisture content. This would make the fuel cost $4.50 to $4.90 per gigajoule, which is competitive with current coal prices.

One way to improve the energy value of the fuel is to leave it in its unprocessed form for the summer months, during which time it will dry out. This leaves less tonnage, but the energy content of the remaining tonnage is higher as it has lower moisture content. The residues can dry from 60% moisture to 30% or 35% moisture content in six months. The energy content of the wood then improves to 11 to 12 gigajoules per tonne. It is important that if this approach is taken that the material is paid for on its energy content, not its weight.

Likely users of this material are wood processing plants such as pulp mills, saw mills, and timber drying plants. In some cases large users of coal such as cement works or power plants are considering the use of biomass to substitute part of their fuel requirements to offset carbon emissions.

A further 1.1 million tonnes of residues are on cutover that has been logged with ground based systems, where the recovery of the residues is at least technically possible, but more expensive. In some cases, removing and using the cutover residues could alleviate re-establishment problems on sites where residue levels are high.

For those who live in remote locations, the biomass from forests may be a potential source of heat and electricity. One of the options for distributed generation is small scale wood gasifiers coupled to an engine or generator.

As energy demand and the price of gas rise there will be interest from gas users in other fuels, and biomass is attractive as it is a renewable fuel. Government policy on carbon emissions may also have an influence in the next two to three years, driving up the interest in renewable, carbon neutral fuels. One of the advantages that forest residues have over other potential biomass fuels is that harvest residues can be accessed now, without having to establish a crop or compete for land, as the resource is already there.