In the February Tree Grower we reported on a harvesting system using a Valtra agricultural tractor with a log trailer driven by power take-off. The second system evaluated is a harvesting operation using MAN converted fertiliser trucks to move logs from the harvesting site to a loading site near a public road. The work was undertaken by Forme Consulting Group, a forestry consultancy specialising in forest engineering and work-flow studies.

As many farm foresters will confirm, higher than expected harvesting costs can be the Achilles’ heel of what otherwise was an enjoyable tree-growing experience. Many 1990s woodlots are now reaching harvest age, and the reality of constructing access to isolated blocks across steep land to meet logging truck standards is hitting home for some forest owners.

Forwarders are all-terrain vehicles which transport logs from the harvest site to a load-out site usually close to a public road. If a harvesting contractor with a forwarder can be found, the forest owner has the option of deciding whether a two-stage operation using a forwarder is preferable to constructing a highspecification road to the harvesting site.

Peter Davies-Colley, a well-established Northland harvesting contractor and farm forester, has for some years been developing a forwarding system using converted fertiliser trucks. The bush trucks Peter uses bin has been removed and a locally fabricated log deck together with roll-over protection, compliant headboard and cab protection have been added to the vehicle.

Forme Consulting undertook an evaluation of the system during harvesting operations in a four-hectare radiata pine woodlot which was located on a steep site approximately 500 metres from a load-out site at the front of the farm property. Woodlots can often be as much as five kilometres from the nearest public road.

The system employed during the study consisted of three Hyundai 250LC/290LC excavators equipped with felling head, processor and grapple operating the harvesting, shovelling, processing and loading functions at the forest stand. The trucks, referred to as bush trucks, transported the processed logs up a slope and over paddocks for 500 metres to the load-out site. A Cat 538 excavator loader unloaded the bush trucks, sorted and stacked the logs and then loaded road trucks. 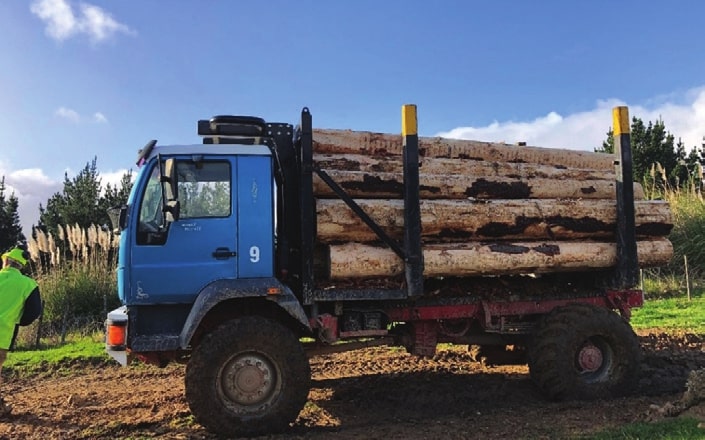 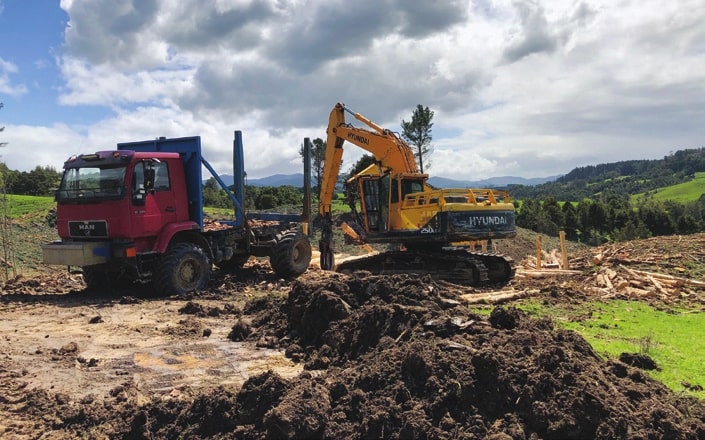 The Davies-Colley harvesting crew consists of one person who operates, loads and unloads the trucks at the roadside and two to three others who work interchangeably between bush operations and driving the bush trucks. For most of the study period one operator controlled the truck extraction cycle by relay.

While one truck was transporting logs to the roadside, the other truck which he had previously driven back to the bush site was being loaded. This system allowed plenty of flexibility to manage wood flow by changing operators and minimised delays caused by log accumulation at any point in the system. 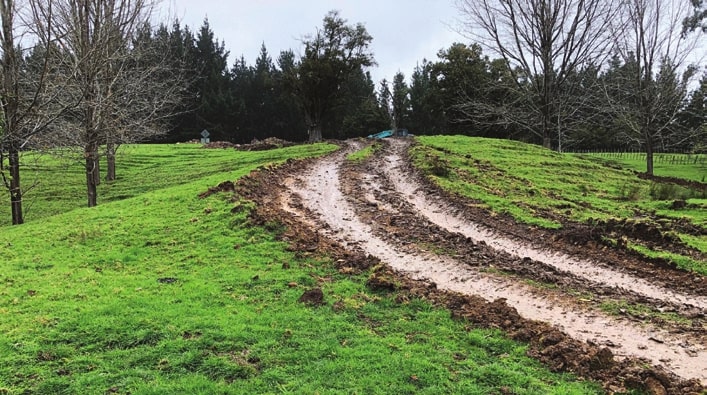 Our evaluation aimed to assess the overall efficiency and productive capacity of the forwarding operation. Travel distances, speed unloaded and loaded over different surfaces, cycle times, daily production and operating costs were all assessed which enabled comparison with other harvesting systems.

In this case, the extraction haul route was demanding because the soil was wet and virtually the whole route was unpaved. Minimal formation work was undertaken to flatten and provide a stable track, and apart from a small length of track entering and leaving the roadside load-out area, no metal was used over the length of the extraction route.

The table on the top shows the evaluation of the time it took the trucks to complete each cycle of loading, transporting, unloading and returning to the harvest site. The terms S1, S2, S3 and S4 are different sections of the extraction route. The data indicates that a complete cycle took almost 20 minutes. The details in the table can help a contractor assess where the time taken could be reduced.

Explanation of the basic costs

The indicative costs shown in the second table are only for the truck, not of the system or of the operator.

Standard hours used are for costing only and are the number of hours the machine must operate annually for recovery of fixed costs. Fixed costs are constant such as loan repayments. The time of 1,400 hours is a fairly standard convention used for most logging equipment although adjustments may be required for smaller-scale farm lot operations.

Variable hours are the number of hours actually used each year for recovery of operational costs The costing adopted is that if you invest say 30 per cent of your own money into the purchase of a machine then you should expect a return on that investment, as well as interest on borrowing.

With any investment of your own money in a venture there is an element of risk. In today’s climate if you were investing your money at up to 10 per cent projected return the risk component might be quite high at three or four per cent. For machines we adopt a conservative approach of 1.5 per cent.

Machine costing can be complex and depends on individual circumstances. Further detail is contained in the technical note or by contacting the authors.

A versatile and cost-effective option

The work was not to undertake a financial evaluation of the harvesting system but rather to assess the bush truck suitability for small-scale harvesting. Our conclusion was that these bush trucks are a cost effective and physically viable option for harvesting small farm woodlots. The trucks are very versatile and the basic fertiliser truck design means they are well-suited to farm land, ground conditions and infrastructure. 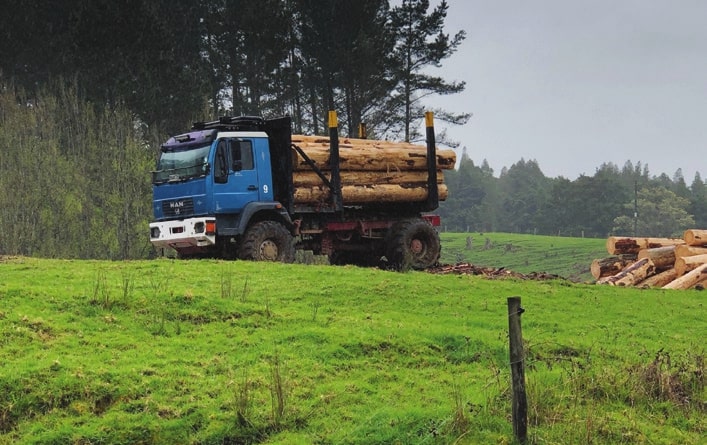 Some additional features and benefits of the system are −

Because the trucks are mobile and manoeuvrable, they can be quickly set-up to transfer processed logs from distant sites to front gate load-out sites. An example might include the need to position several truck loads to meet an unexpected shortfall in volume for an export ship. The Davies-Colley operation has been known to transfer over 500 tonnes in one shift with two trucks.

Anyone interested in the full technical details of our evaluations of the bush trucks can find a technical note on the website.

The assistance of Peter Davies-Colley and his harvesting team is gratefully acknowledged. Support and funding were provided by Forest Growers Research and the Forest Growers Levy Trust.

Jack Palmer is a forestry engineer.