Always a hot topic, and offering plenty of puns to bright sparks, wildfire was been on people’s minds over the summer.  Images of the extreme Australian bushfires filled our television screens and coloured our sunsets, showing us that climate change affects our lives.

The point was hammered home by drought around New Zealand and almost daily reports of small fires started by sparks from trains, roadside mowing or any number of everyday activities. All in all, these were not the best conditions for Scion scientists to be planning to burn hectares of gorse in mid Canterbury.

How hot does it get?

Gorse is known to be a heavy fuel source. But Scion and international scientists were surprised by just how hot their controlled fires were.  An infra-red camera mounted on a drone at the edge of a burn reached the upper limit of its sensing capabilities at around 940°C.  In-fire cameras blistered as the water which was supposed to keep them cool boiled away, and data loggers melted inside well-insulated housings. The temperatures in the centre of the fires are thought to have reached 1,500°C.

However, good planning, firebreaks and pre-burns, along with the involvement of Fire and Emergency NZ, the Department of Conservation and local fire volunteers, meant that the burns were carried out safely and a lot of valuable data collected.  This data will give insights into fire behaviour in scrub fuels and ultimately protect people, property and the environment.

Why is it necessary to light fires to study fire? Fire scientists are testing a new theory about how fire spreads and studying wildfires in a laboratory is not very realistic. The best way to study fire behaviour is in situations as close as possible to the real world.

New Zealand is one of the very few countries where experimental fire burns are still possible. This is mainly due to the relationships built up by the Scion fire research team along with Fire and Emergency NZ. The burns attract worldwide interest from fire researchers. The gorse burns were scrutinised by researchers from the US Forest Service, San Jose State University and the University of Canterbury, as well as the Scion fire team.  The amount of instrumentation, and the number of cameras and drones watching and recording ensured the recent fires were the most closely observed fires to date.

How do fires spread?

Flame fronts have been observed to pulse, with flames pushing out ahead of the fire front where they can directly light fuel. This has led to a new theory about the way wildfire spreads. Instead of an evenly spreading
flame-front radiating heat into unburnt fuels ahead, fire scientists are investigating whether the hot air rising from the fire is replaced by cold air sweeping in from behind and propelling the flames forward. The process
creates a series of peaks and troughs within the burning flame front, with flame peaks in areas where the air is rising and pulling the flame upward, and troughs formed by the cold air circulating down.

The theory was first proposed by the US Forest Service based on lab-scale fire test carried out in the Missoula Fire Sciences laboratory. The next stage involved experimental burns carried out in stubble fields near
Christchurch in 2018 and 2019, with the evenly spaced crop rows and uniform stubble height closely mimicking laboratory fire conditions.

Each of the stubble burn sites was wired and monitored with temperature and wind sensors, cameras and high-speed thermal imaging equipment. The fire behaviour observed during the stubble burns was similar to that seen in the laboratory.

Gorse, with its heavy fuel load potential, was next chosen to model fire behaviour in scrub-type fuels.  Beyond that, the team plans to continue their work in heavier, more complex vegetation, such as wilding pines,
which can form dense thickets which also have a very high fuel load.

Why we need to understand fire behaviour

The gorse burns are a part of a larger programme preparing New Zealand’s response to extreme fire. Extreme fires are unpredictable and deadly, with any fire having the potential to become an extreme fire at any time. They can generate phenomena such as fire tornadoes, by cool air being sucked into a central hotspot, creating a vortex of flame. They can also throw embers ahead of the fire front. A bushfire in a plantation forest near a Canberra suburb destroyed houses in 2003.  Although flames did not cross the gap separating the forest from the houses, flying embers led to the loss of 250 houses.

Until recently, our maritime climate has protected New Zealand from large extreme fires. The 2017 Port Hills fire is believed to be one of New Zealand’s first, with a fire tornado reported. More local extreme fires are expected as climate change continues to exert its effect. The number of hot, windy, low-humidity days, or extreme fire risk days, will increase. Beyond the traditionally dry east coasts of both islands, more extreme fire days are expected in the Manawatu, coastal Otago and the Wairarapa.

The country’s emergency services need to be ready to respond to the increased risk and possibility of extreme fire. The focus of the experimental burns and the wider research programme are about being able to predict when extreme fires might occur and how they might behave.  Fire researchers look for patterns in fire behaviour, such as how updrafts and downdrafts are pushing fire into the fuel. Predicting extreme fire spread rates in different weather, terrain and fuel types will help to improve firefighter safety and prevent loss of life and property, as well as getting fires under control quickly.

The large clouds of smoke produced by the gorse burns are also being used by Scion atmospheric scientists and smoke dispersion experts. This will improve the realtime smoke and fire spread prediction method they
are developing as part of the Extreme Fire Research Programme.

Being able to predict the path of a smoke plume from a fire is important. Fine smoke particles smaller than 2.5 microns can penetrate deep into people’s lungs, affecting those with asthma or other breathing
conditions and if highly concentrated, the health of everyone is compromised.

With initiatives such as the One Billion Trees Programme promoting planting more trees, some people are questioning whether flammable pines are the right choice. However, public perception may not match reality.

Fires in pine forests are splashed across the news every summer. If asked, most New Zealanders would say the biggest wildfire of 2019 was the Pigeon Valley fire near Nelson which burned across 2,300 hectares of commercial plantation forest, property and pastures. Thousands of residents were evacuated from the surrounding areas with some away from their homes for more than two weeks, but only one home was lost. In reality, the biggest wildfire of 2019 started in remote conservation estate near Middlemarch, Otago in November and burned around 4,600 hectares of tussock and scrub, twice the area of the Pigeon Valley fire.

The forestry industry, including owners of small to medium forests and major estate owners and managers, are acutely aware of the danger fire poses to their investments. The NZFFA and the Forest Owners Association, working with Fire and Emergency NZ, have a set of guidelines to help forest owners manage the risk of wildfire, and to respond to and recover from any fires that do occur. Fire and Emergency NZ also have a lot of resources online for to help land owners protect their properties.

Preventative measures are mainly about managing people and their activities. The principal causes of plantation fires are escaped burns, forestry operations, vehicles and campfires, with fires started outside plantations posing the biggest risk.

Local conventional wisdom maintains New Zealand’s native forests do not burn well. However, in the right conditions, anything will burn. Following severe drought in central North Island in 1946, at least 17,000 hectares of native forest burned, along with 13,000 hectares of planted forest, in what became known as the Taupo fire. During the 2019 and 2020 Australian bushfires, ‘permanently wet’ rain forests burnt for the first time, once again after a long dry period.

The majority of wildfires in New Zealand are caused by people, with natural phenomena such as lightning causing less than one per cent. Some are lit deliberately but accidentally get out of control, some result from more malicious intentions, some are caused by carelessness such as letting off fireworks and others by activities which can lead to ignition.

For example, the 2019 Pigeon Valley fire started when agricultural equipment being used in hot, dry conditions hit a stone and caused a spark. As result, fire researchers concentrate on how to communicate fire risk and messages of preparedness and readiness to respond to wildfires.

Most of us are familiar with the fire danger signs with indicators that move from low to extreme during the summer, and we can make the connection between very dry conditions and the risk of fire, but how should
we change our behaviour? Should we take care when using machinery in the heat of the day? Should we light that campfire or rubbish fire? In other words, we are aware of the risk but not prepared. 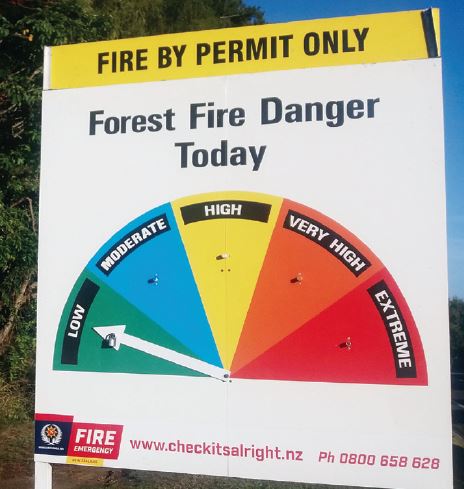 The situation is further complicated by the fire season coinciding with the summer holiday season.  While local people may be aware of fire risk and prepared, New Zealand and international tourists do not know the local conditions and may be more intent on having fun than taking notice of fire bans or restrictions.

Another group of people who are vulnerable to wildfire, but might not realise it, are those who live on the fringes of cities and towns. People living in new subdivisions are not usually aware of the possibility and risks of wildfire. Not only are new residents to the area generally not exposed to any community networks around wildfire communication, they also tend to have a city focus and an expectation that emergency services will save them. However, the Port Hills fire showed that fire can threaten urban fringes and home owners cannot rely on their houses being saved.

Talk, talk, talk is the simple answer to communicating fire awareness and appropriate behaviour at different risk levels. However, different people need different messages via a range of media and face-to-face settings. The most effective messages are those which resonate with people, that touch on things they value. This includes Fire and Emergency NZ using images of native birds in their advertisements, using traditional Maori knowledge around the use of fire, and encouraging urban and rural communities to come together and learn from each other.

Fire conditions are changing fast. The results of Scion’s rural fire research will help ensure communities and the country are more aware of fire risk and better prepared for extreme fire. By the end of 2020, the team
hopes to have a prototype system ready for testing which links fire detection, fire growth prediction and smoke methods with weather forecast data for near real-time prediction of fire spread and its effects.  Incorporating this into fire responders’ everyday operations will give organisations such as Fire and Emergency NZ faster, more accurate information on fire occurrence, spread and potential effects allowing firefighting resources to be mobilised rapidly and effectively.

The Extreme Fire Research Programme is funded by the Forest Growers Levy Trust and other stakeholders including Fire and Emergency NZ, DOC, NZ Defence and MBIE.