When Graham and Pam Hunter took over their 484 hectare farm in 1997 it had 30 paddocks and the only exotic trees on the property were the old orchards and well established trees which still shelter their house and two older house sites. Now 18 years later, the transformation is well advanced into a well-balanced and productive farm which respects and protects the natural features.

The farm is located in the Kononi district of South Otago which is north of Tuapeka Mouth on the east side of the Clutha river. The Hunters have 40 hectares of flats adjoining the river and this silty loam, which has been subjected to flooding over the centuries, is very productive and being sheltered from the prevailing south west winds, provides a natural micro climate. Graham and Pam are converting these flats to lucerne, plantain and clover for lamb finishing. Access to the flats is not easy as a steep escarpment leads up to the rolling ridges which form the majority of the farm and farm buildings at 200 metres above sea level. Of the total farm area, 360 hectares are in pasture with about 260 hectares of that having been cultivated. Subdivision has increased the number of paddocks to 70.

Of the remaining 120 hectares, much is taken up with kanuka-filled gullies and steep faces which, where fenced off, are supplemented with many other native species. A 19 hectare gully which runs right down to the banks of the Clutha is protected by QE II covenant. This area contains an uncommon mix of mountain, red and silver beech as well as totara, rimu, kahikatea and a flourishing understory of ferns and low growing species. In a nearby gully of four hectares, 15 years ago Graham cut strips through the existing kanuka and planted alternate rows of totara and red beech. When first viewed at a field day in 2005, everyone was impressed with the establishment and growth of these trees as they reached for the light well between the kanuka. But problems arose in the form of fallow deer which are common in the area. The young deer took a fancy to the young totara especially, and many now show the effects of their antlers with broken leaders, ring barking and shrubby growth. With the kanuka closing together Graham was almost giving up on the project but the continued growth and form of the red beech has been encouraging enough to persuade him to persevere. 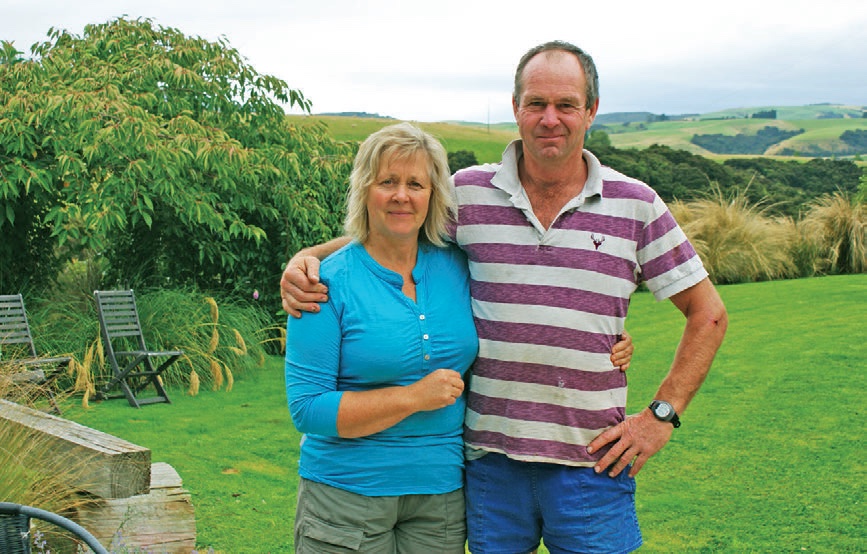 There are over 40 hectares of well-tended woodlots on the farm. The majority of these are radiata pine but smaller areas of Douglas fir, Ovens cypress and macrocarpa are well sited and thriving. The form of the radiata is impressive with light branching and good height which Graham attributes to the rocky sub soil and relatively reliable rainfall of about 950 mm annually.

The extensive Ernslaw owned forest on the other side of the river confirms this is good tree country. All the woodlots are sited to make the most of their shelter potential and this has been augmented by the five kilometres of shelterbelts that Graham and Pam have established.

These impress, not just with their extent but with the mix of species used and their strategic placement. Red cedar Thuja plicata is a favourite species in multi row belts with eucalypts E. rodwayi and E. cordata often alternated for variety. Natives, flax, cabbage trees and toi-toi are used in low growing belts and pruning or trimming of larger species has meant porosity is maintained. Poplars have been used extensively on areas subject to slumping and Graham has also used their pruning for stock feed in dry seasons. Giant redwoods and liquidambers have been planted as specimen trees on various sites. 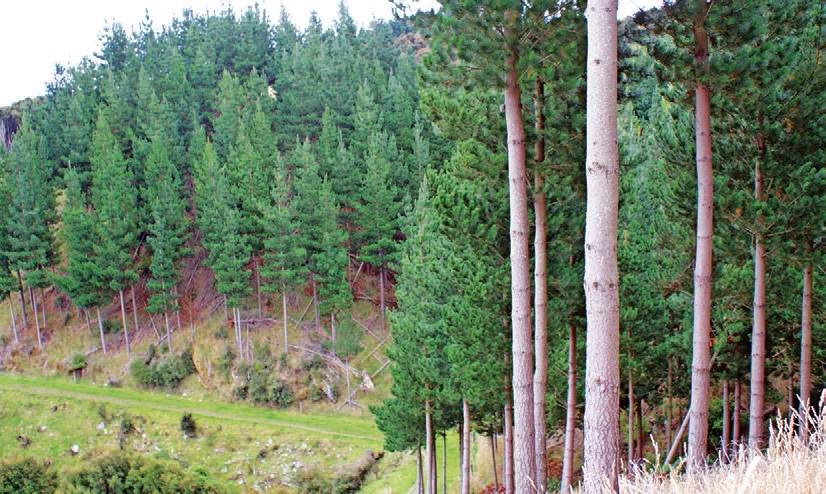 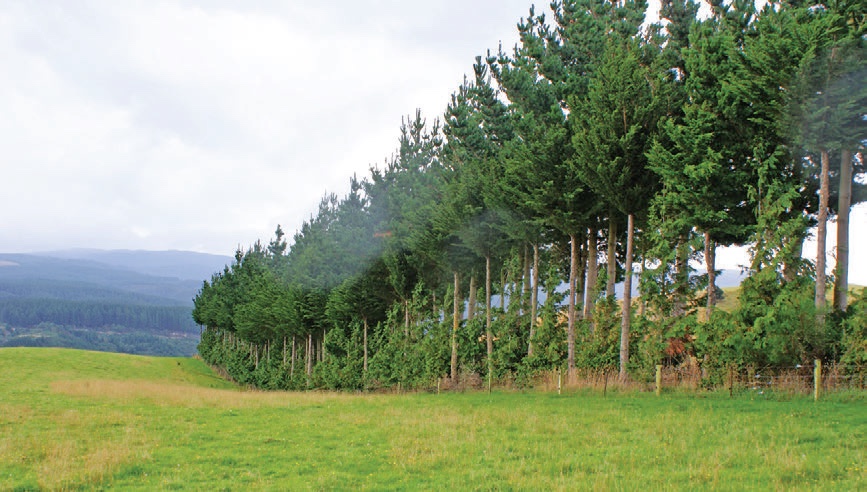 In 2009 Graham and Pam registered their farm as organic and their 2,500 ewes, 700 hoggetts, along with 100 cattle, are farmed with that status. The inherent restrictions on use of anthelminthics, vaccines and weed sprays makes management more difficult than for conventional farmers and they continue to evaluate whether the higher prices received justify the added problems. The tidy appearance of the farm confirms the pride taken by Graham and Pam in their property. 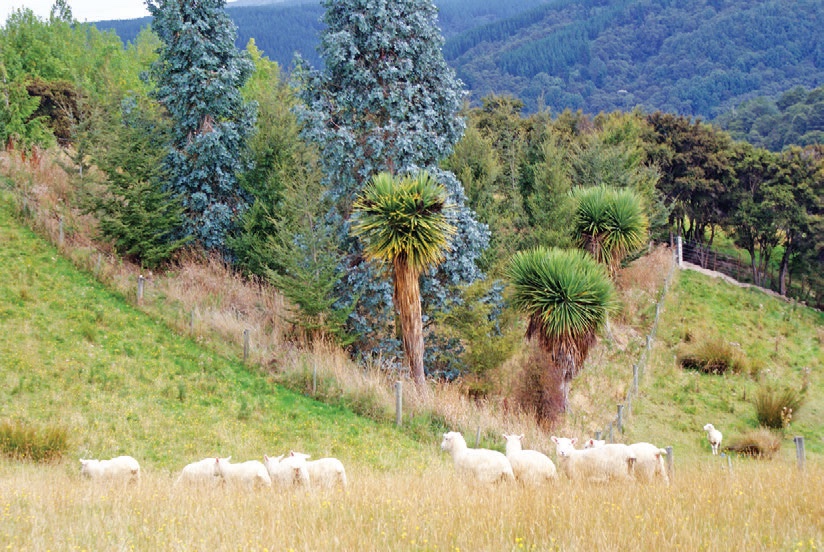 Graham has been a stalwart of the South Otago branch of farm forestry for many years. He has just completed a two year term as president following 14 years served as secretary, with more than 20 years as a committee member. He has been unstinting in encouraging and advising others on trees on farms with field days, discussion groups and on farm visits.

The list of other community groups that Graham and Pam are involved in is far reaching. Both are very involved in their church with Pam taking weekly music sessions aimed particularly at rural mothers and their children. Graham is currently an events organiser for the local Lions club and still enjoys his touch rugby.

The progress made on this farm in less than two decades is testament to the hard work and sound judgement of this couple. They have planted trees wisely and imaginatively to enhance their farm and future income and have provided a great example of good land use. They are very worthy winners of the 2015 Husqvarna Award. 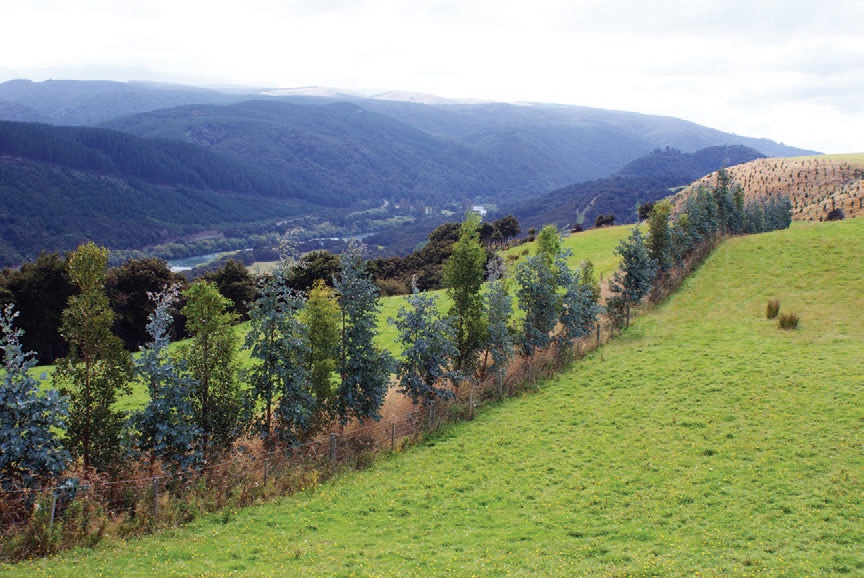