The McArthur property, Lochaber Downs is situated near the small town of Whitecliffs, nestled in the foothills midway between the Rakaia and Waimakariri rivers. The farm of 680 hectares was subdivided in 1996 from the former Steventon holding which Graeme farmed in partnership with his brother. When they took over the original holding in 1964 it was mainly devoid of trees and Graeme set about establishing an array of specimen and shelter plantings that still distinguish the area today.

Ranging in altitude from 300 metres to over 800 metres, the farm consists mainly of tussock-covered hills with cabbage trees and kowhai prominent in the damper sheltered gullies. Annual rainfall is a usually evenly spread 1,000 mm with heavy snowfalls uncommon on the downlands. A total of 2,100 ewes with replacements and 160 cows and heifers are run on the farm. The 16 per cent of the farm which is cultivated paddocks has a deeper soil profile overlying glacial outwash. Not far below the soil are seams of coal, some of which have been mined in the past via a network of tunnels.

The downlands are sheltered by more than 1.6 km of shelterbelts consisting of a variety of species, but with Eucalyptus nitens and Leyland cypress the most common. These have been side trimmed and sited strategically to provide effective shelter from a southerly storm.

On an east facing slope is the largest of Graeme’s woodlots, planted in 1981/82 and now being harvested. The 30 hectare block is mainly radiata pine but with some well-formed E. nitens and E. regnans at one end. There was considerable damage to this block from wind-throw last year but the harvesting crew is managing to recover most of the high yielding woodlot, although at a higher cost.

Appreciation of natural features and plants is evident in the management of the hill blocks and a 4.5 hectare QE II Trust covenant was established to preserve wetland values. Another covenant has been approved and awaits fencing.

Lochaber Downs is a real family operation with two of Graeme’s daughters living on the farm and both families actively involved in the management of the property. The newest dwelling belonging to Jill is off the grid and situated on a ridge 600 metres above sea level. The distant lights of Christchurch are visible at night. Graeme’s real passion is for growing natives and all three houses have well established plantings around them.

With Jill’s house this extends to over two hectares of indigenous plants right around it, planted over the last three to four years. A variety of locally sourced and home propagated species have been used to good effect and include local tussocks, broadleaf, black beech, olearia, coprosma and many others. Careful use of shelter species was needed to allow the successful establishment of slower growing and less hardy natives on this exposed site. 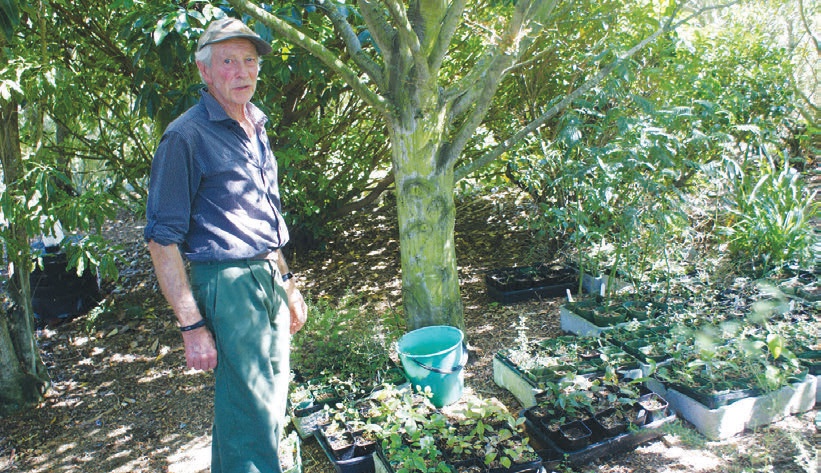 Graeme and Jill for many years until 2006 ran a native nursery in Whitecliffs. This was one of the first to specialise in local provenances from the Whitecliffs Ecological Area and they grew over 300 different species. As well as supplying thousands of hardy plants, advice on landscaping and species selection was readily given and played a large role in popularising natives in the area.

Graeme has excelled in the area of service to the community particularly with planting projects. He has donated large numbers of plants and trees to school planting projects and public amenities. In many cases he also designed the project and helped with the planting and subsequent maintenance work. Graeme still grows about 3,000 natives a year and is currently propagating plants for a neighbour’s three hectare conservation project.

Other projects where Graeme has made a big contribution include the Lake Coleridge Arboretum, the Silverwood property of the late Frank White, and a large private planting of four to five hectares of natives at West Melton. Graeme’s enthusiasm for indigenous extends also to animals and over a period of 15 to 16 years he has made about 10 trips as a volunteer helper with the endangered species unit of DOC. On these self-financed trips he has helped with pest eradication and track formation, particularly associated with kakapo and black robin. This has been a large commitment in time and effort. Graeme acknowledges the support and encouragement of his family and in particular his wife Christine.

As with his service to the community, Graeme’s involvement with the NZFFA has been long and extensive. He first joined in the late 1950s and has unbroken membership since then. He has been on the branch committee for nearly all that time. As well as taking responsibility as Chairman of Central Canterbury Branch for many years, Graeme has the distinction of serving on no less than four conference organising committees. Lochaber Downs has also hosted many visits by branches, groups and individuals.

Every organisation needs knowledgeable enthusiasts who are prepared to give generously of their time, pass on their skills and wisdom and persist when others flag. Graeme McArthur is one of those. A quiet unassuming man with a long and active commitment to farm forestry and a very worthy recipient of this year’s Husqvarna Award.