Shelterbelts suffer from many of the ailments which exposed, open-grown radiata crops on fertile farmland are often accused of possessing. Rapid growth rates and unbalanced crowns which are exposed to frequent strong winds can produce unstable timber with low wood density and stiffness properties. Defects such as resin pockets and checking can be more common and problems such as stem breakage, sweep and taper, as well as a tendency to produce large diameter branches, can further downgrade the value of logs produced.

If properly tended in a timely fashion, a large pruned butt with a good proportion of clearwood can be achieved. The export market will pay good money for the large branched upper logs returning a positive stumpage values for the owner especially if your port or mill is close by, as is the case for much of the Taranaki region.

A shelterbelt just north of New Plymouth being felled in January 2012 on the L A Alexander trust farm was discovered to be a spacing trial established in 1987 by the Forest Research Institute, now Scion. Jeremy Thomson therefore started a project to carry out an assessment of what remained of the trial to salvage some data for the good of farm foresters across New Zealand. Funding and in-kind contributions from the Taranaki Regional Council, the Taranaki Farm Shelter and Forestry Association, LA Alexander Trust, NZ Forestry Limited and Scion made the assessment and analysis possible. The results were presented at the Taranaki component of the Trees on Farms seminar series.

Scion had phased out the re-measurement of the timber belt trial series as funding tightened and the timber belt growth model was completed and implemented in Standpak. In addition, the results from various agri-forestry regimes were showing low density wood, high taper, and large diameter branches in the second log, which tended to be discouraging. However, many farm foresters continued to establish shelter and timber belts along stream margins for riparian protection and as wind breaks along fence lines.

A pre-harvest inventory was carried out on the 188 trees which remained standing and the dataset analysed. When grouped by spacing treatment, parameters such as diameter, volume, branch size, taper, stem form and modelled log products were used to predict the influence of tree spacing on profitability. Following this, the costs and revenues from the harvest were collated to describe what could be expected from a typical small woodlot operation in Taranaki. 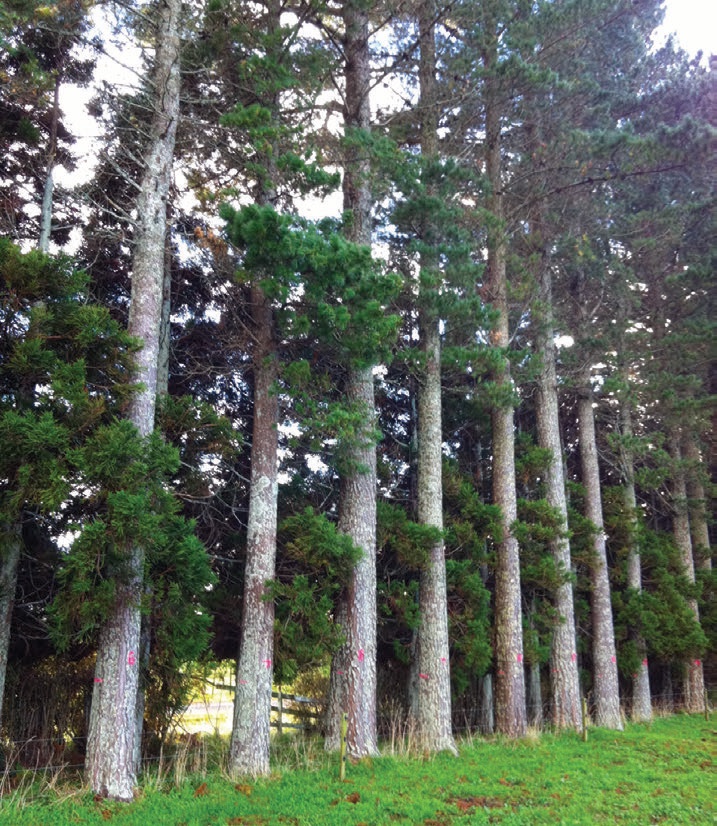 The shelterbelt spacing trial was established as part of Forest Research’s shelter research programme based on the idea that New Zealand farms needed well managed shelter systems to provide shelter for livestock and crops and to improve profitability by diversification of land use. Forest Research installed and measured a set of 540 permanent sample plots in shelterbelts across New Zealand.

They were mainly single and two row radiata pine belts planted with or without a supplementary species. The eight plots at the Alexander Trust property were part of a national series of 13 spacing trials located throughout the country. This data was used to develop a national shelterbelt growth model.

The trial was planted in 1988 using GF 18 radiata pine seedlings in single row one, two, three four and five metre spacing, and a two-row two, four and eight metre spacing.

Japanese cedar was established in a double row planting on the windward side of each belt. Each row in the double row treatment was two metres apart with each tree offset midway between the opposing rows.

The trees were pruned in four lifts to between six and 10 metre pruned heights. No information can be found on why the pruned height was varied and if it was intended as part of the experimental design. The results from a preliminary analysis were presented in a report entitled ‘Alexander Trust shelterbelt spacing trial – a preliminary analysis and growth projection of timber production’ describing the first ten years growth. It was shown that the wider spacing produced shorter, fatter trees with higher levels of mortality and stem damage. Growth modelling of treatments predicted that the pruned logs would be a significant component of value and that a two or three metre spacing in the single row treatment would prove the most profitable.

The trial was harvested in March 2012. All logs were transported to the New Plymouth port destined for overseas markets. Logging and loading costs were relatively high at $40 a tonne due to the small volume harvested and clean up requirements. Cartage and weighbridge fees were relatively low due to the close proximity of the port only 26 km away. No roading costs were incurred as logging trucks were able to use the farm track network.

A total of 432 tonnes was recovered from the trial, producing a gross revenue of $42,500. With total costs of $24,660 a stumpage of $41 a tonne was achieved. For a shelterbelt on a well tracked farm, close to the port or mill, it is possible to enjoy the benefits of shelter for the length of a rotation, and to generate satisfactory revenue when the time comes to harvest.