Roydon Downs is a 245 hectare property in the Bay of Plenty. It is unique in that over the last 48 years there has been a very active tree planting programme. Currently, 150 hectares are planted or protected.

The block was drawn as a Lands and Survey ballot farm in 1963. It is typical of the hill country of the region − flat valleys and tops and short steep sidlings, a fairly reliable rainfall of 1,500 mm and ranges in altitude from 60 metres to 130 metres above sea level.

When settled, the block consisted of four paddocks and it was soon discovered that the light pumice, volcanic ash type soils were very prone to erosion, and when the ground cover was disturbed soil was lost. This led to the first plantings of radiata pine in some of the washouts and more vulnerable areas. Encouraged by the excellent tree growth and an increasing appreciation of trees, we started planting up our steep sidlings that even then we recognised were damaged by cattle. Gradually over the following years, these sidlings have been planted in trees.

The plantings have been relatively small areas, mainly between three and five hectares as experience has shown that blocks of this size can be handled by ourselves as a family. The bulk of our plantings are radiata pine of which there 90 hectares.

There are also 15 hectares of cypress − lusitanica, Leyland and ovensii, five hectares of redwoods, as well as 15 hectares of eucalypts Eucalyptus globoidea, E. pilularis and E. regnans. Blackwoods are scattered throughout the farm. Conservation creek protection, indigenous blocks and amenity plantings amount to 20 hectares. All the time we have gone for top quality − good tree stocks, planting and silvicultural practices. 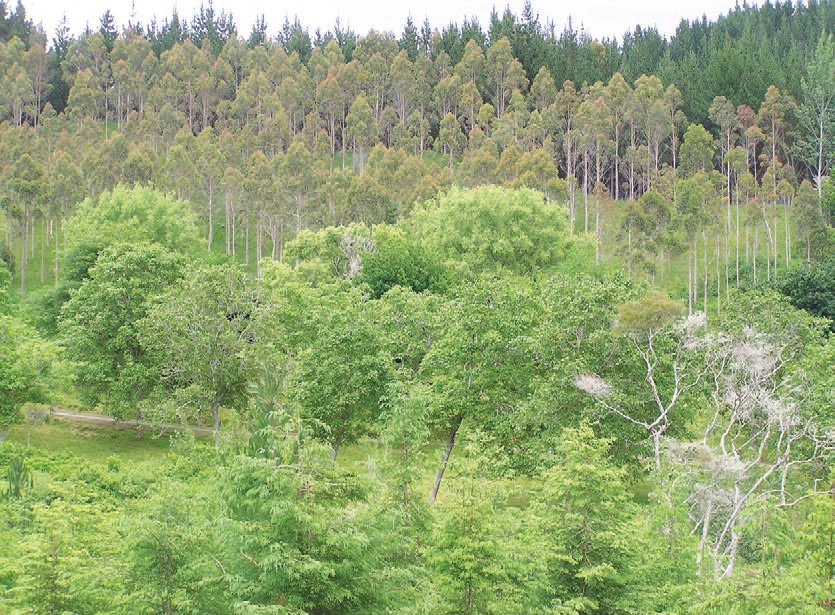 The farm is very much a family farm. We have three children that have been bought up with trees and animals and do not see forestry as anything other than being part of good land use. They each have their own blocks of trees where they pay for the silviculture.

In terms of current stock numbers we are wintering 400 dairy cows and carry approximately 80 dairy cattle through the summer. Hay and silage is made on the flat country.

Several blocks have been production thinned, bringing in approximately $1000 a hectare at age 15. We have clear felled six blocks with an average net return of $40,000 a hectare. The last block harvested was in 2009, the trees were 32 years old and produced a return of $33,000 a hectare. All blocks are replanted the following winter. I cannot stress enough the importance of good access and producing a quality product.

When the property was settled 45 years ago, every time it rained the creek became a raging torrent. Over the years the creek has been fenced off completely with riparian plantings. Fletcher Forests has bought two neighbouring farms and a Department of Conservation reserve has been created upstream, so the entire upstream catchment has been protected.

This riparian protection is spreading, with three neighbouring farms also planting. The catchment flows into Little Waihi estuary and is monitored by Environment Bay of Plenty for water quality. The upstream catchment is now cut off from livestock and as a result the stream rarely changes colour or floods.

Other benefits of agroforestry

There is no doubt that the trees are the reason for Roydon Downs being a viable and attractive farm. Forestry and trees have provided a very positive experience. It has required a learning curve which, apart from a polytechnic correspondence course, has mostly been in the field.

Another element of diversifying into farm forestry, not initially anticipated, has been the interest local people have shown in visiting the farm for recreational purposes. Two huts which were originally built for the family are now used by visitors. Over the years a walkway system has been put in throughout and this is used every weekend and often during the week. There is no doubt that the extensive plantings have made the farm more attractive.

Over the last 10 years the people and recreational side of the farm has become increasingly important and is now a major component for us. Two log cabins have been built and the woolshed converted over to accommodation. Local schools regularly use the farm as well as kindergartens and pre-schoolers.

In 2007 a well planted property came up for sale beside us, so along with several other investors we took the opportunity to buy into this. We liked their concept of keeping the flat areas for grazing and cropping and last year we sold 107 hectares of our property to the Clearwood Roydon Downs company, but still keeping a interest in the group. Our main aim now is to develop our home block for the recreational side.

Issues that will have a big affect on the small grower will be forest certification along with the ETS and its ramifications. So why are more land owners not involved in developing a productive, sustainable and more profitable land use system?

Forestry is not a quick fix solution. It is a long term commitment with plenty of foresight and some faith in the future. It is the reason we are still have a family farm.