The multi-purpose eucalypt trial at Makoura

Managed eucalypt coppice blocks could help with two important roles at the Homebush waste water treatment site. One is to bolster the proposed screen plantings along the west and north perimeters of the site. This involves using the 40-metre buffer between them and the border strip areas. Approximately 16 hectares of land could be then be irrigated by the sub-surface drip irrigation system proposed for the screening vegetation. The coppice plantations would also provide fast growing shelter to help reduce odour dispersal.

The other role is of the coppice blocks would be to back up front line willow protection in erosion-prone margins adjacent to the Ruamahanga River. In some flood-prone areas of the site, eucalypt coppice plantations provide a number of benefits that pasture does not. This is due to deeper, more expansive root systems along with the ability to tolerate immersion, capture silts and enhance soil quality. In addition, by adopting drip irrigation methods these sites are not exposed to the risk of serious soil loss as they would be during development for border strip irrigation.

Keeping sewage out of rivers

Our eucalypt trial has come about as a result of the deliberations of a group of residents trying to find a way of improving the effluent treatment system. In the long term the aim is to eliminate the need to pump treated human waste water into rivers. 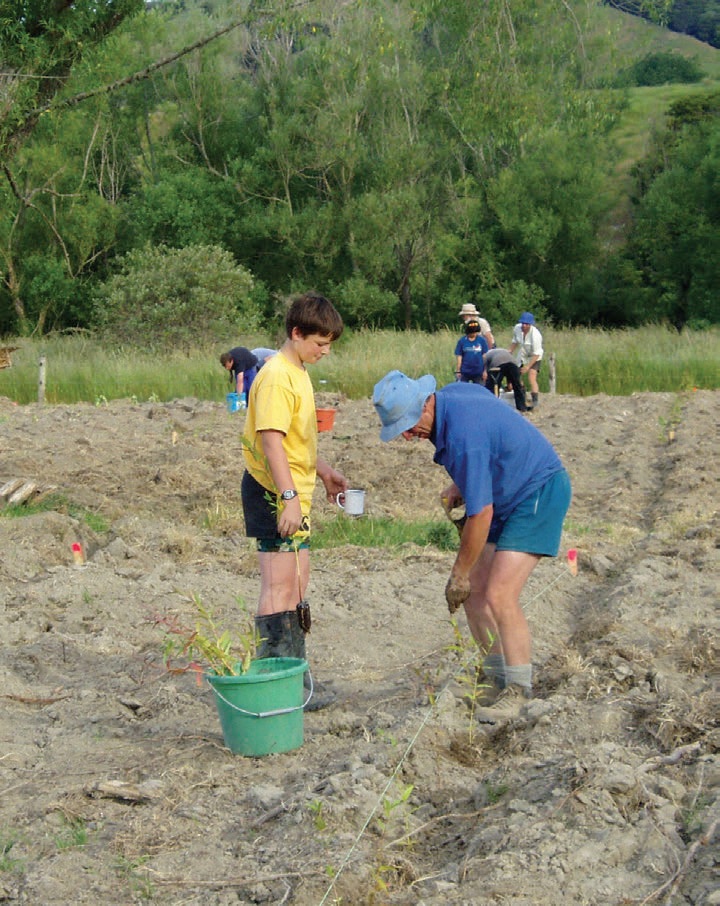 On the lower reach of the Makoura Stream, Stuart Forbes and Adrianne Avery have provided land for riparian planting of natives some of which were planted this year as part of the Makoura Stream restoration project. To add value to this they have also set aside a two hectare paddock. We are using this paddock to plant eucalypts that, when used as posts, have a potential natural durability in the ground of over 25 years.

Our research into naturally durable timbers led us to Paul Millen of Vineyard Timbers Ltd who supplied us with a range of best performing provenances of species most suited to our conditions. The performance trial involves five replicates of the following seven species and provenances.

The survival trial involves two additional species E. argophloia and E. cloeziana, as well as the Lake Tyers provenance of E. bosistoana. They will be duplicated in lots of 20 plants in an outside block of the matrix.The purpose is to assess their frost hardiness. Other than for the survival trial, the replicates have been randomly located within lanes bounded by E. nitens to eliminate edge effects and provide a way of quantifying any gradient in the soil quality.

Early results show outstanding success with this trial which was planted in December by volunteers. Despite the hot dry season, of the 4,500 trees planted only 35 had died when inspected in January. These were mainly the usually tough E. nitens which were used as control species.The trees were irrigated soon after planting and release sprayed in the New Year.

The regime comprises 3,225 stems per hectare. Anticipated rotation length is 8 to 10 years, but success should become evident by age four. Silviculture will involve form pruning and clear bole pruning as appropriate.

There are a number of environmental opportunities using posts, poles and other products from these trees, particularly in vineyards.

We can avoid the need for toxic CCA (copper chrome arsenic) treatments for posts and poles and the potential leaching of toxins into the soils and groundwater. Particular concern is the evidence of arsenic leaching from the posts into groundwater and the potential for customers to assume that New Zealand vines grow in the presence of toxic chemicals. Local winegrowers have expressed a desire to use naturally durable posts in conjunction with a move towards organic certification. 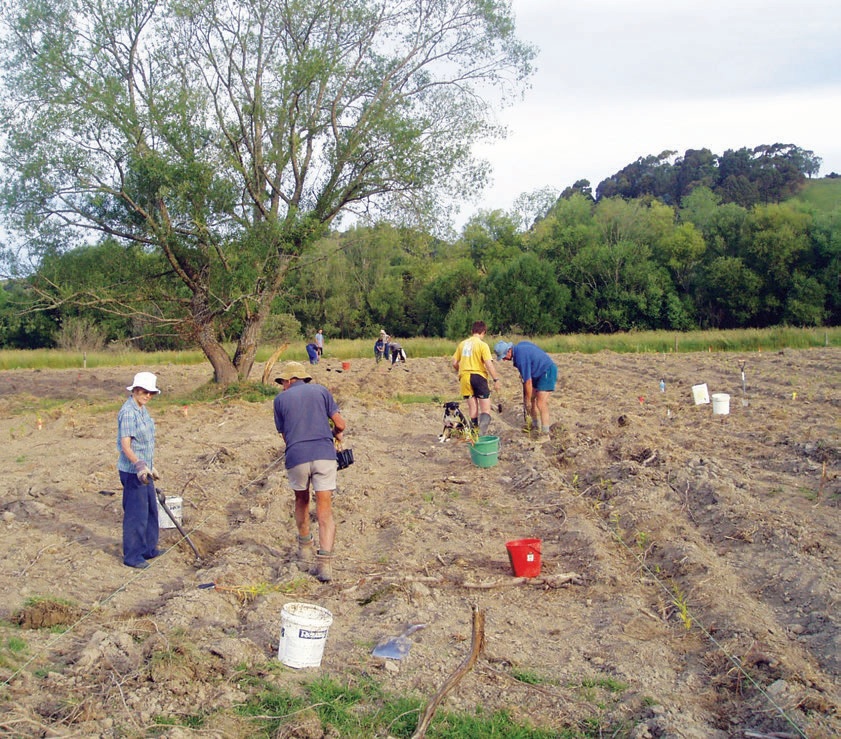 A significant number of posts are broken every year in vineyards, hundreds of thousands each year in Marlborough alone. It works out at about 30 broken posts per hectare each year on average.There is a significant problem disposing of them if they are treated timber but not if they are naturally ground durable.

Community health can be improved and health costs reduced by developing a high quality fuel resource. Elderly and disadvantaged members of the Masterton community commonly struggle to pay or provide good wood for heating their homes. The consequence of this is poorer personal health and smog issues from sub-standard fuel, all of which adds a significant cost to the community health bill.

Eucalypt biomass from the post operation have potential in the manufacture of wood pellets or as a community firewood venture. The Waingawa industrial area is the centre of radiata pine processing in Wairarapa as well as the centre for firewood production. This creates an opportunity to use the high density wood and volatile oils in leaf residues from eucalypt coppice plantations, incorporating them with radiata pine waste in manufactured fuel wood production.

Generating revenue from carbon credits is also worth considering although this is on hold while the Emissions Trading Scheme is reviewed. In general, trees in a coppice system probably sequester about 15 tonnes of carbon per hectare per year. The trial will determine if high stocking of fast grown, high density timber being used in carbon-neutral situations can generate even more revenue over and above sales from harvesting.

Finally if the plantations are irrigated with treated effluent water from the Homebush treatment plant, growth rates would be increased. But in addition, there are the environmental benefits as the trees take up nutrients that would otherwise leach into groundwater or rivers.

A lot of support

We owe a lot to the enthusiastic group of volunteers who got this project underway in December. It involved a strenuous programme of tractor cultivation, deep-ripping, laying out of plots and planting 4,500 trees. Technical support came from Sustainable Wairarapa chairman Andrew Stewart and key members who are distinguished in agronomic and engineering research fields. In addition to technical support they helped with planting. Backing, financial support and planting assistance came from the Wairarapa Farm Forestry Association along with Stuart Orme’s offer of his expertise to analyse the carbon sequestering opportunities. Ian Campbell, chairman of the Mountford Trimble Trust, was an early encourager of the project and the Trust subsequently made a substantial financial contribution.

The Greater Wellington Regional Council is a silent partner in the project. Staff of its Land Management Department have provided both technical and practical assistance. Paul Millen of Vineyard Timbers Ltd provided advice from the start and supplied the most appropriate eucalypt species for use in the trial. Vineyard Timbers is part of a large research project in Marlborough to discover and develop the best provenances of ground durable eucalypt species.

An update would be good but last I saw of this trial was that the frost took out all of the cladocalyx, the quadrangulata were chewed to bits and multiple leadered and the bosistoana were poor form and multiple leadered. The well-proven E. botryoides might have been a better choice...