The drive up to Koro Station from Gisborne, with Nick Seymour’s entertaining and knowledgeable commentary presented Gisborne at its best. The previous day’s rain had freshened the drying hills and the autumn colours of the vineyards and homestead plantings were stunning. As we rose up from the flats on our climb up to Koro I was fascinated by the sheer variety of roadside native shrub species and their obvious willingness to regenerate. How I wished for a brief stop, plastic bags and a trowel.

We had been divided into two groups, scheduled to meet at the Patutahi hall at midday and swap buses with the Nick’s Head Station visitors. The larger six wheel coaches were not sufficiently agile to negotiate the steep and serpentine roads on Koro Station.

Ray and Grace Newman were both born to farming families, Ray from Gisborne and Grace from Kaitaia. Grace was nursing in Gisborne and they were married in 1960. A four year spell in the Waikato working at dairy farming earned them enough to buy 30 hectares of flats in Te Karaka. On this they grew maize and kiwifruit which was wiped out by Cyclone Bola in 1988.

Their farm forestry enterprise began in 1972 with the purchase of Koro Station and the immediate planting of nine hectares of pine. This block was harvested in 1996, Ray saying that it was a great moral and financial boost on what, when planted, he only had erosion control in mind. The planting inventory on Koro to date is very impressive, with over 30 species employed in various sites covering at least 140 hectares, along with the extensive shelter lines.

The Newman family home and farm headquarters is set out on a broad ledge at 300 metres above sea level. The 580 hectare farm descends away down to the Hihioroa Stream at 90 metres, and rises to the trig point at 440 metres. The opportunity for erosion is immense and has been met head- on by Ray and Grace and their growing family. The soils on Koro Station are mudstone and sandstone with a covering of ash on the easier slopes. With a rainfall of 1200 mm, the farm is generally well watered with streams, springs, troughs and dams, and supports about 5000 stock units. This includes 2500 ewes and 200 cows.

We ate the woolshed area which was dominated by a short row of older Eucalyptus saligna. They towered above us even though they started well down the slope. Ray insisted that we try our luck in guessing the height of the tallest specimen, which eventually we were told had been accurately measured at 58.5 metres. There would be few taller trees of any species in New Zealand.

We were taken into a block of black walnuts planted in 1999. Ian Nicholas explained that black walnuts are fussy trees needing a warm, sheltered site that avoids out of season frosts. The ones we saw had a slow growth rate but were told that meant there would be good dense timber in the trees. Ian said that some of them still needed proper form pruning. He immediately gave us a demonstration by breaking off a couple of unwanted branches in a nearby tree and said that was how it should be done. Ray did not express any audible comment at this destructive but helpful act on his trees.

We made a brief stop at the eucalypts which were planted in 2001. They were a mixture of E. muelleriana, E fastigata and E.obliqua. Angus Gordon and Ian Nicholas gave us a brief talk on their merits.

Macrocarpa on an unstable site

Before we spread out too far admiring the evidence of Ray’s many farm projects, we were led off down the road to walk to the 10 hectares of macrocarpa and lusitanica planted in1996 on the cutover 1972 pine block. Ray began by apologising for the canker problem, but it was not obvious.

The trees were well pruned and appeared generally healthy − they were alive. At just over 300 stems per hectare Ray was wondering aloud what to do next, especially given the importance of these trees whose first priority was to hold the glacial movement of the steep slope to a minimum. However so many had moved down the slope with the soil that a number were growing at weird angles or had curved trunks.

It was fortuitous that our group included four of farm forestry’s well known cypress specialists – Ian Nicholas, Denis Hocking, Patrick Milne and Paul Millen, who proceeded to respond to Ray’s invitation for guidance. They generally agreed that the cypress species has a smaller root mass than other species, and so its ability to lock up this mobile soil and stop the glacier was questioned. 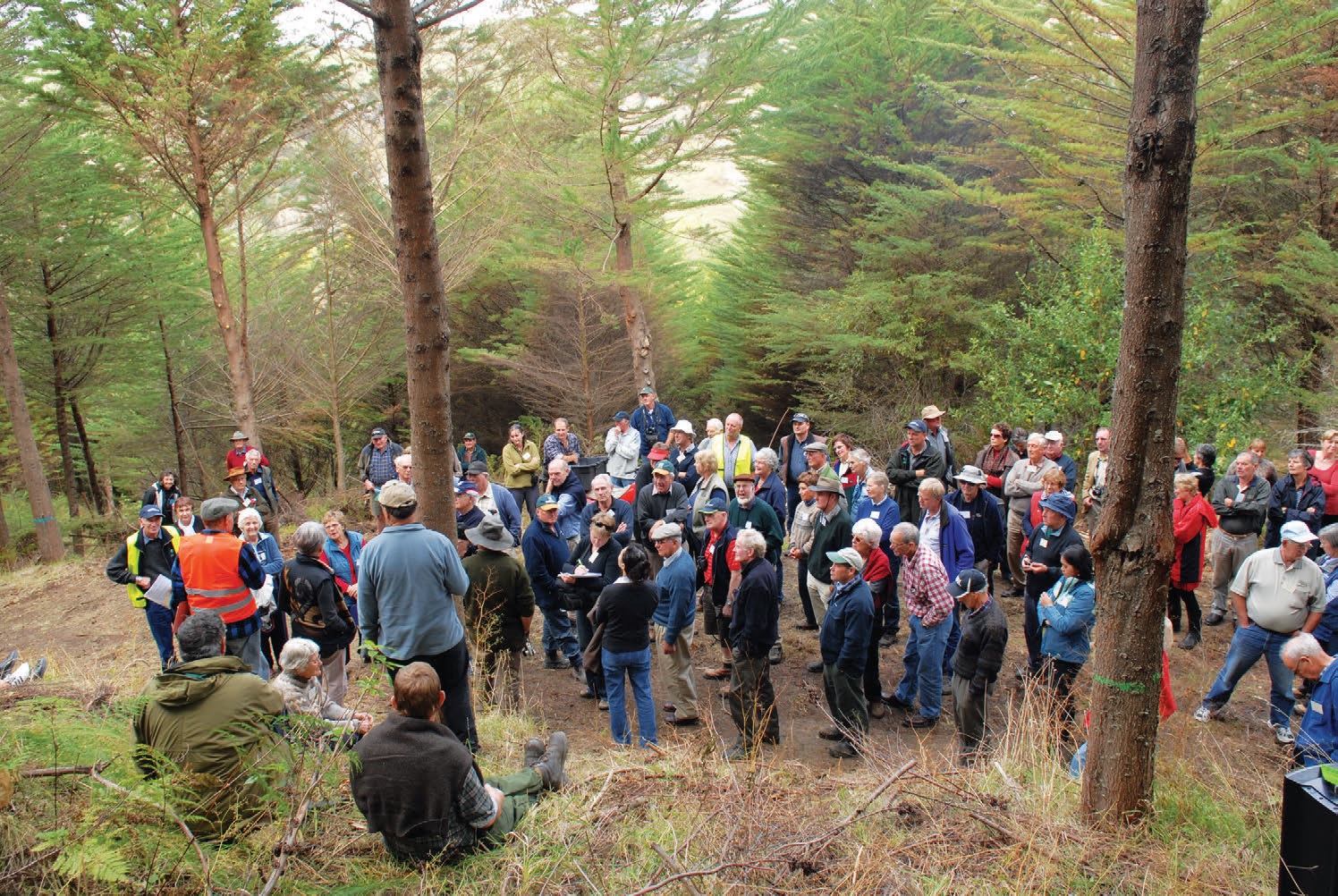 Then came the proposition to introduce the shade tolerant redwood into cleared spaces, as a possible first step in achieving a continuous forest cover system. And how about blackwoods in the mix as well? Ian reckoned that this would be fine as long as light wells were organised for them to maximise their growth rates.

The ideas and comments bounced back and forth, with some final agreement that the attributes of redwoods made them a most suitable species for unstable sites such as this. The redwood’s convenient habit of vigorously coppicing following harvest allowed a new crop to be established without requiring a new rooting structure to be grown each time. It also became clear that significant further thinning would seriously compromise the ability of the block to hold the slope intact, and that these were firstly ‘working trees’ with a job to do before they were a log resource.

The discussion was good natured, broad and thoughtful in the best of farm forestry tradition, and theorised a variety of scenarios that could be adopted, all of which really depended on what the harvest requirements might be such as the age at harvest, the next species choice or the next management regime? Ray would do what he would do, but we onlookers all came away with a new basket of knowledge and ideas, made possible by the mutual trust that allows such spirited ‘bare it all’ banter.

All good things come to an end, and the buses arrived to haul us back up the hill to another tempting paper bag lunch at the homestead. However in spite of time constraints around the rendezvous with the Nick’s Head party at Patutahi, many could not resist a quick gallop down another hill to see the 2002 Kuser redwood trials. Professor Bill Libby had brought several different strains of Sequoia sempervirens out from the north west of the United States and Ray had put his hand up to host one of the trial plots.

Ian Brown and Ian Nicholas were able to explain the value and significance of these trial plots that were in place on farms throughout New Zealand. There was very little information available on redwoods before these trials began. They have now been observed for seven years and there are clear indications of which clones produce trees with good form. Whether they also produce good timber has yet to be decided. 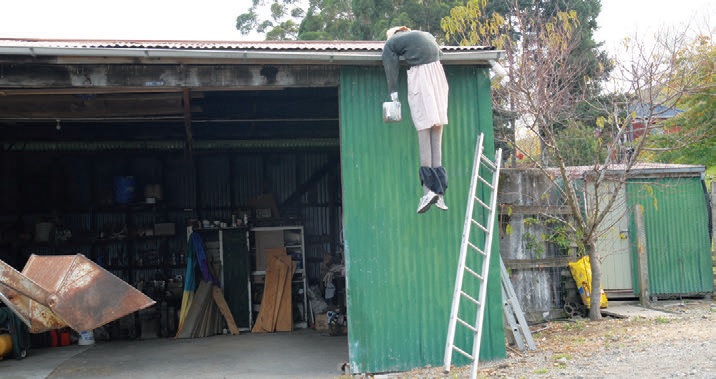 Ray and Grace’s beautiful garden is like no other, and we quickly realised that the point of difference is humour. There was ‘Edna’ of cartoon fame stranded over the edge of the shed roof, paint brush in hand but ladder kicked away. Help was heading her way in the form of the farmer on the tractor, front end loader raised for action.

The garden centre piece was also like no other. In the middle of the lawn grew the largest holly tree I have seen, multi trunked and sporting logs rather than stems, and had been growing for 80 years. Lunching in the Newman’s lovely garden was reward enough for being a farm forester, but of equal value was the relaxed camaraderie and catching up with good friends, old and new. 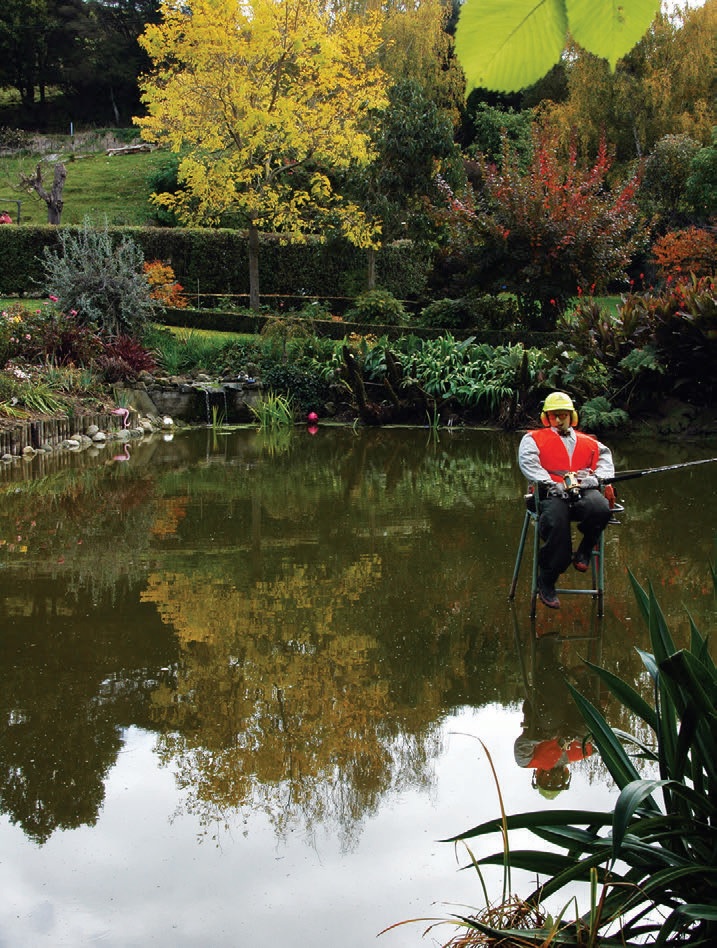 Ray strongly made the point that Koro Station and its extensive farm forestry is a family affair, with current input from three generations. Ray had grown up impressed by his father’s plantings and had not hesitated to begin planting his own forests. It was too short a visit to do justice, but we enjoyed our half day at Koro.