Eastwood Hill has long been on our minds as a place that we must visit some day. When the Gisborne conference included a visit to Eastward Hill as part of their excellent programme, we were hooked. Elizabeth and I had read and heard so much about Eastward Hill − 135 hectares containing 15,000 specimen trees, 3,500 different species, all tagged and mapped. To add to this they are a supplier of seed stock to Appletons nursery who have propagated the very trees growing on our property in South Canterbury today – we could not wait.

Our group assembled at the southern end of the arboretum at a place called Millennial Wood. Lee Newman, chairperson of the Eastwood Hill Trust Board outlined the governance structure and history of the arboretum, it soon became obvious that its formation was largely through the efforts of two great men.

Douglas Cook the founder was inspired by the beautiful parks and gardens in Britain. Following World War I he devoted his life to establishing Eastwood Hill at a cost of £55,000 as he sourced trees and shrubs from around the world. Bill Williams purchased Eastwood Hill from Douglas Cook in 1965, and helped set up the Trust Board to ensure the arboretum would remain in perpetuity for the public to enjoy.

The Friends of Eastwood Hill are a very important part of the project as they help in fundraising and general running of the arboretum. Recently they managed to take a part of Eastwood to Canterbury, where they won a gold award at the Ellerslie International Flower Show in Christchurch. 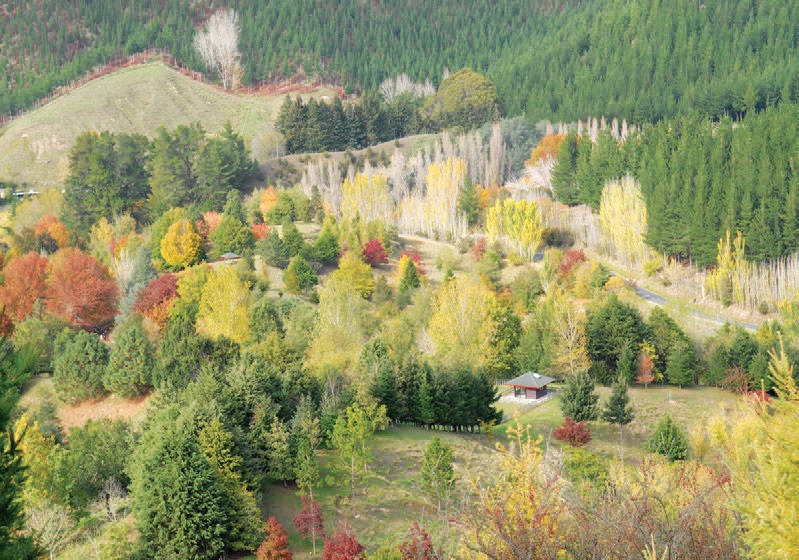 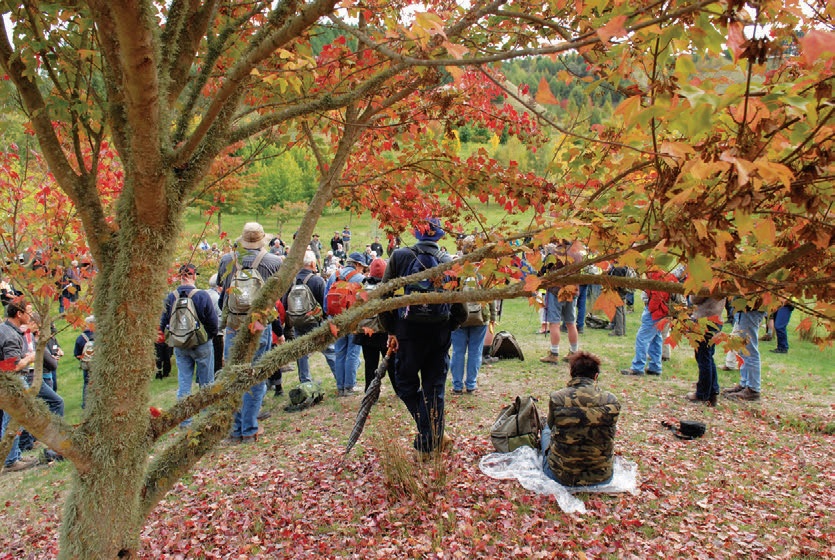 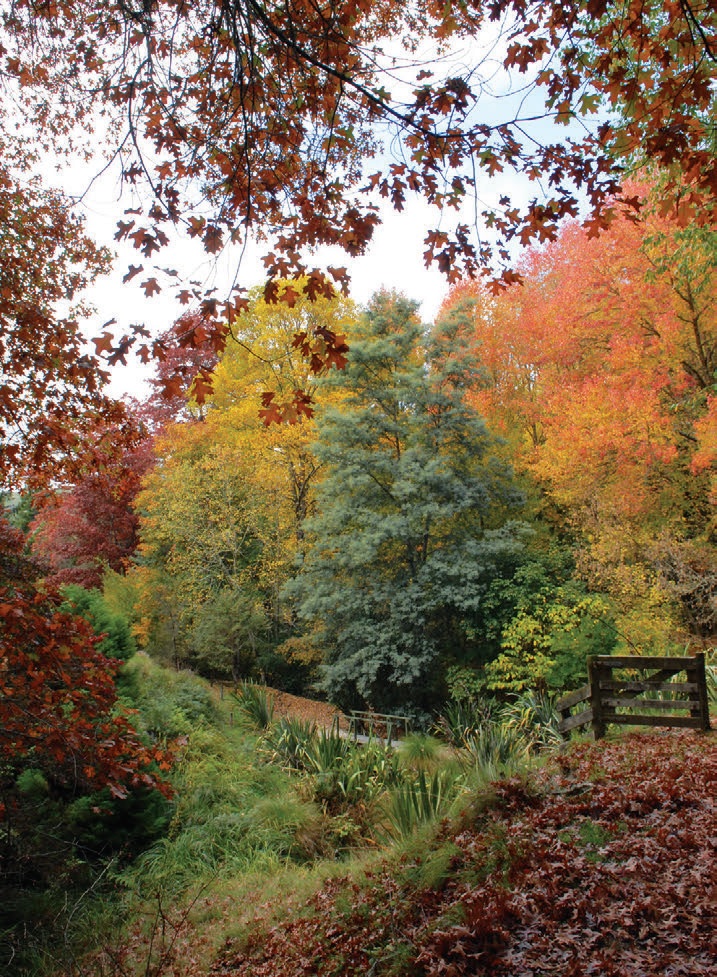 Paul Wynen, the curator of Eastwood Hill Arboretum, addressed the group, giving us his insight from a management perspective. He explained that the area of Eastwood Hill is approximately the same area as Kew Gardens in London. Kew have 800 staff, Eastwood Hill have two.

Paul’s enthusiasm for all plants and bird life was confirmed when he admitted that he had the perfect job. Paul has had a challenging year, with the East Coast drought putting pressure on the newly planted Millennial Wood.

The 2000 trees planted since year 2000 have had to be constantly watered. Cicadas have thrived in the drought, with the second highest concentration of these insects in New Zealand. The cicada grubs eat the roots, the adults suck the sap and also lay eggs under the bark along with a poison to stop the bark growing back, damaging the young tender roots and branches. Following the speeches, the conference split into smaller groups to take different tracks throughout the arboretum. 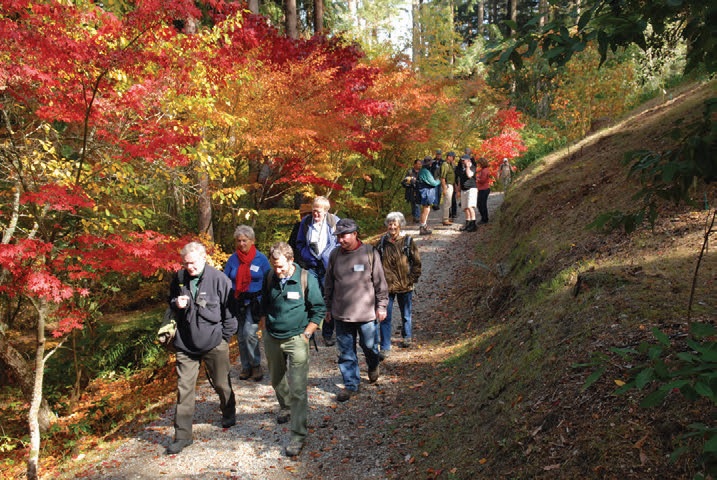 We were fortunate to remain with Paul who gave a running commentary as we went along. Paul chose a route starting with the latest planted Millennial Wood, and progressed on through the different age plantings as we went.

Springfield, which was planted in the 1990s, showed signs of being planted too deep, with root development suffering as a result. Many of these trees were stunted and will ultimately fall over. Almost all of the planting at Eastwood Hill to date has been random, apart from sites that are too wet or dry, and the overall result has been very pleasing. The mix has been approximately 60 per cent deciduous and 40 per cent evergreen. In future Paul plans to plant on a geographical basis.

Next up we traversed through the Mexico Way via the Bob Berry walk, and on to China Corner. Chinese elm Ulmus parvifolia, the drought tolerant urban street tree was on display here, as was the impressive Chinese cork oak Quercus variabilis.

The bird life, particularly tui, are attracted to this area by species like cherry and winter flowering gum Eucalyptus leucoxylon. The Lookout track took us past a fabulous ginko before we climbed to a tabletop called Glen Douglas lookout, where we could see poplar stabilisation and redwood plantings on far away hills.

Nearby Lookout Point gave us a view to the east, showing an outstanding group of liquidambars with good colour, all but one grown from a single seed. Liriodendrons and scarlet oaks completed this stand, which was overlooked by the tallest trees in the arboretum a Eucalyptus regnans. Paul remarked that during the summer the mature trees require 1200 litres of water a day.

Descending the Burma Road, adjacent to Cabin Park, we observed some frost tender species including magnolia, camellia and tree rhododendron. Throughout the arboretum we were impressed by a number of well-grown and mature copper beech trees. In my opinion, these are highly prized trees, but for most of us they take a lifetime to grow.

Circus Walk took us past a massive silver lime Tilia tomentoss, Kentucky Yellowwood Cladrastis kentukea, and a stunning Persian ironwood Parrotia persica.The Circus Block derived its name from when drovers used it as a holding pen to for cattle over night.

Pear Park marked the end of our journey through the arboretum, but was also home to some of the oldest trees, planted from 1914 onwards. A huge St. Landrys oak 60 metres high took our attention, as did a Quercus pagoda and Q. phellos, rare species not seen before by many of us.

We had all worked up a big appetite at the conclusion of the walk, and were well catered for when the Friends of Eastwood Hill put on a great lunch. The visit will leave a lasting impression on all of us, with comments like awesome, unique and impressive being quoted often. We think that this was the best day to visit, following a drought which set up a spectacular tapestry of colours in a leaf display that was just starting to drop.