Since the 1950s over six million poplars have been planted throughout New Zealand. Planting reached a peak during the 1970s in response to government incentives for soil conservation. Unfortunately many of these trees received little or no silviculture. Thinning and pruning could have produced uniform trees with clean, knot-free timber and better wind resistance, and also an increase in light to the pasture understorey.

Producing new narrow crowned varieties is one of the aims of the current poplar breeding programme at HortResearch.

However many useful varieties are moderately spreading to broad crowned if left untended. Owners of these trees are faced with expensive clearing operations when tracks and fences are damaged and blocked by falling trees and branches. It is important to note that pruning is not required for poplars which have significant Lombardy, Populus nigra, parentage.

Renewed interest in poplar for timber

Most current poplar plantings are largely unmanaged and therefore unusable as a timber source. But there is renewed interest in using poplars for timber, and a number of landowners have established small woodlots in recent years. Poplar wood is very pliable, odourless and has an attractive light grain. The basic density of poplar wood is classified as low to medium, with densities of 300 to 400 kilograms per cubic metre depending on the variety. The wood has been used for fencing, gates, stockyards and truck decks, panelling, furniture, veneers, and to make fibreboard, pulp and paper. Blackheart, also known as bacterial wetwood, is a zone of infection that can affect the heartwood or the heartwood-sapwood transition zone, particularly in the old hybrid black poplars such as I 78 and I 214. Wetwood differs from normal wood in appearance and in chemical and physical properties and is more difficult to dry. However new clones such as kawa are less susceptible than the older varieties. 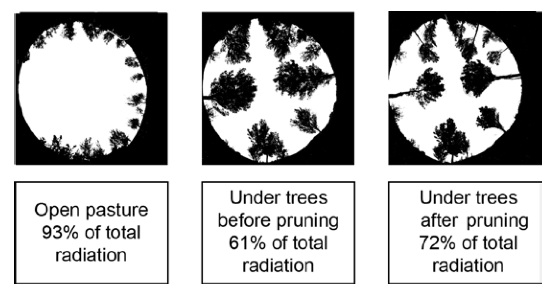 The benefits of pruning?

A study has been conducted to quantify some of the benefits of pruning young Veronese poplars at AgResearch’s Ballantrae Hill Country Research Station near Woodville. The study trees were planted in 1995 at 160 stems a hectare for erosion control on an unstable hill slope. In March 2002 we pruned trees in one block to approximately five metres, removing about 30% of the canopy. We measured the effect of pruning on the understorey light environment, pasture growth and tree water use. As part of the project, relationships were also determined between branch diameter, leaf area and weight. This allows calculation of the weight of leaves removed from a tree during pruning which has relevance for fodder use.

Simulations using hemispherical canopy photos showed that the percentage of total radiation reaching the understorey pasture increased from 61% to 72% after pruning. The annual pasture production under trees was 10% to15% lower than in the open, but there were no consistent differences between the pruned and unpruned sites. However, because of the increase in transmitted radiation to the ground surface, we expect that more intense monitoring would show an increase in pasture growth under pruned trees. 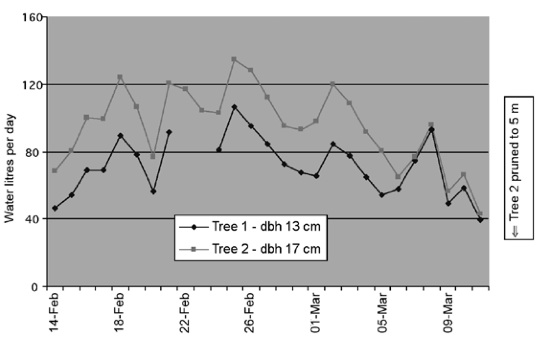 Sensors were installed in two trees to measure water use before and after pruning. In February one of the trees ? Tree 2 in the graph below ? which was 12 metres high and with a diameter at breast height (dbh) 17 centimetres, used an average of 110 litres of water a day from the soil. This is equivalent to 1.7 millimetres a day at a tree spacing of eight by eight.
Water use was reduced by 28% following pruning, resulting in a water use similar to the smaller, unpruned Tree 1 which was 11 metres high and with a dbh of 13 centimetres. There was no measurable effect of pruning on soil water content in what was an above average rainfall year. However, on a drier site the reduction in tree water use may reduce competition for water and improve summer pasture production.

Poplars should be pruned to a single leader during the first two years. After that, pruning of the side branches up to 50% of the height of the tree is beneficial every two or three years. This will result in about a third of the foliage being removed which ensures that the growth rate of the tree is maintained in the next growing season.

In this study, pruning increased the quantity of light reaching the pasture understorey, which is desirable in most silvo-pastoral systems. It also reduced tree water use, improved the appearance of the trees, and will help to produce clean knot free timber that is easier to harvest. Pruning is best done in late summer, to reduce re-growth of epicormic shoots and to avoid the main flight period of wood boring beetles. It will also provide a fodder source for livestock.

After pruning some root dieback is expected, which may affect soil strength negatively in the short term. However the real benefits of silviculture – improved pasture growth. improved timber properties, and a manageable, useful tree after 20 years – far outweigh any short-term disadvantages. Anecdotal observations collected after the lower North Island storm of February 2004 also suggest that pruned trees and narrow crowned varieties were less prone to wind damage.

Poor establishment or site selection, droughts, wind damage, slips, stock and possum damage, and sleeves that fail to split are the most notable causes of poor growth and fatalities in our trial plots. A stroll around trees while pruning every couple of years can help detect some of these dangers, and it helps to learn something for future plantings.

A farmer-led group, funded by the MAF Sustainable Farming Fund, is currently working on a planting and management plan for poplars and willows on farms. This plan will give guidelines on optimal tree management and planting patterns, and will also cover options for dealing with old trees.