Graham and Tess Smith purchased 37.4 hectares close to Kihikihi, near Te Awamutu in the north King Country. Graham had been share-milking and always looking for an opportunity as he walked with a friend around and over a rough run-off with a stream on two sides of the boundary and a steep hill covered with scrub on the other.

His friend told Graham he would not touch it – it is waste land. Graham thought it as a challenge and scraped up enough finance to buy Miraka Farm in 1988. There is no evidence of waste land now, with 80 dairy cows. These are on 28 hectares, half of which is flat silt loam with a few paddocks on hilly Maioroa ash soils. The herd is Jersey Friesian cross and are milked once a day in a herringbone cow shed. This job starts at 5.00 am every morning throughout the season so the days are long with the many activities that have developed over the years.

On the back steep rocky hill is a spring, which has been tapped to gravity feed a third of the dairy area, the main house and cowshed tanks. From here this water is pumped to the other third of the farm grazing paddocks.

Graham belongs to Fonterra’s small milk suppliers’ group for farms with fewer than 300 cows and writes on his blog giving advice on trees and cows. He has frequently been asked about sustainability, diversification, succession, tree planting and management.

The stream on the farm’s boundary starts in the Pureora Forest Park and has pristine clean water that trout inhabit. Fishermen come from many countries including South Africa, Canada, England, Australia as well as New Zealand and stay in the lodge accommodation provided by Graham and Tess. This is a popular holiday for many people in park-like surrounds with farm walks along the cow races and tree plantings.

Other groups also stay in the lodge. Abseilers come with their rock-climbing gear and hike up to a significant large rock face, surrounded by native tree planting. The rock face is 50 metres above the valley and is used as a training and skill test area for climbers on rescue operations. .

Managed trees are significant, with mature plantings on the steep land of 9.4 hectares for soil retention. Radiata pine planted in 1992 were pruned, thinned and finally harvested in 2013. The pines were replanted in 2014 and have already been thinned and pruned twice. There is also a macrocarpa trial with 220 trees planted 2020.

There are 300 kauri trees growing around the dairy paddocks which Graham has pruned to allow sunlight on the cow race and pasture. The growth is good, as is a group on a steep sideling which will be a farm feature in the future. Poplars have been planted near the river and pruned to eight metres. The poplars shade the water, stabilise the banks and will later provide timber.

There are amenity trees throughout the farm for colour and shade. They include liquidamber, London plane, chestnut, walnut, swamp cypress, poplar, silver birch, pin oak, scarlet oak, English oak, maple, elm, totara and rimu. All are pruned to let sunlight on the pasture.

Two creeks from the hill country flow in different directions into the Mangatutu River. To stop any farm nutrients leaving the farm, two wetlands have been created and fenced. Water tests prove that it is working, with only clean water leaving Miraka Farm.

Graham leases 9.4 hectares close by where there are no trees, but useful for grazing his young heifers and providing some supplementary food. 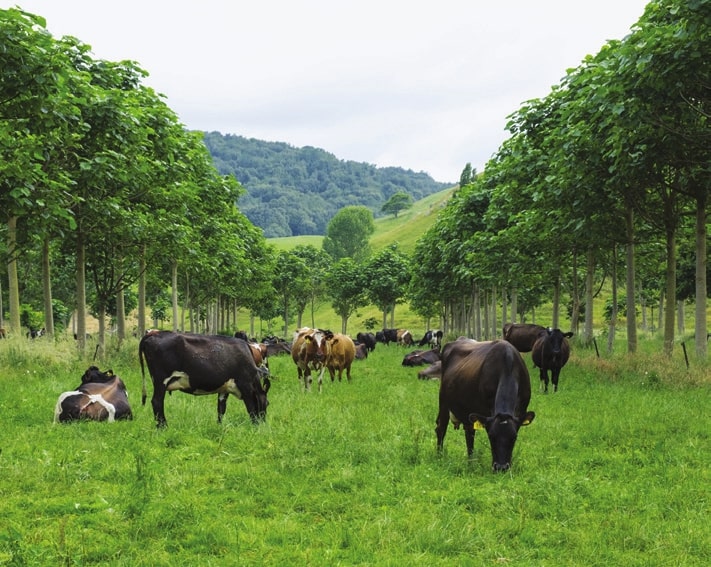 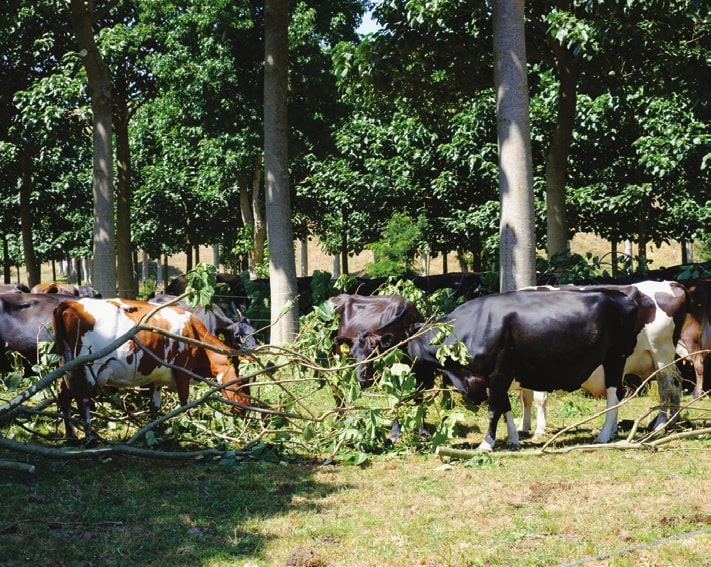 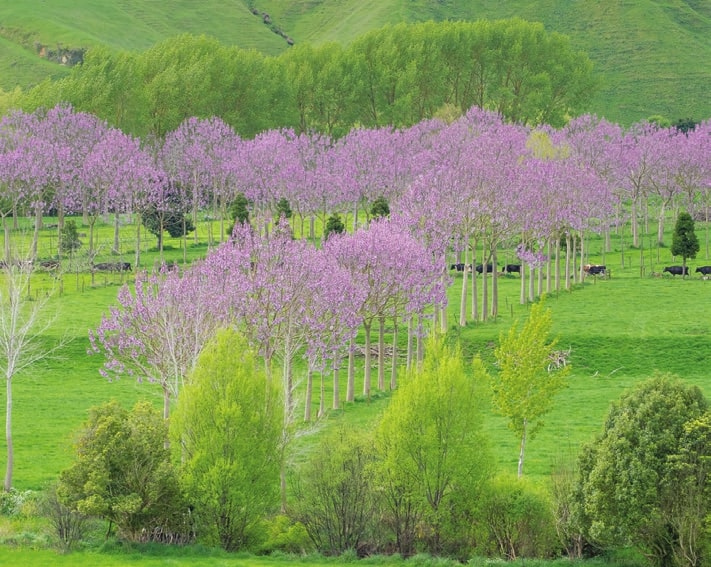 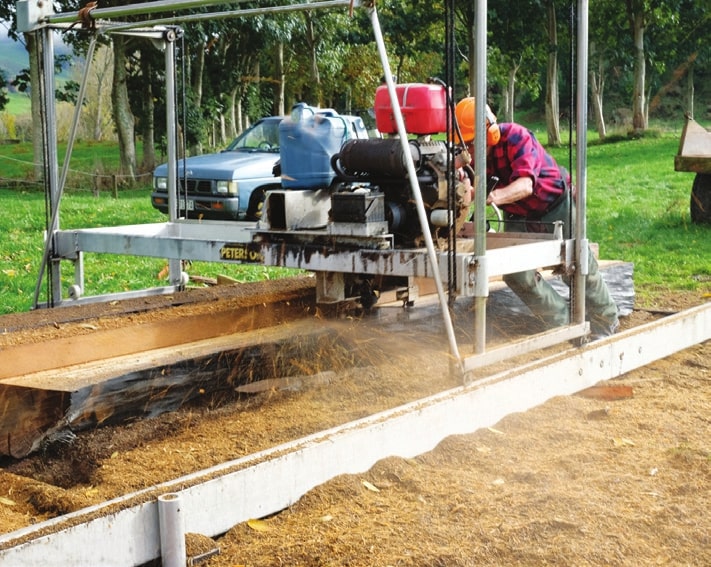 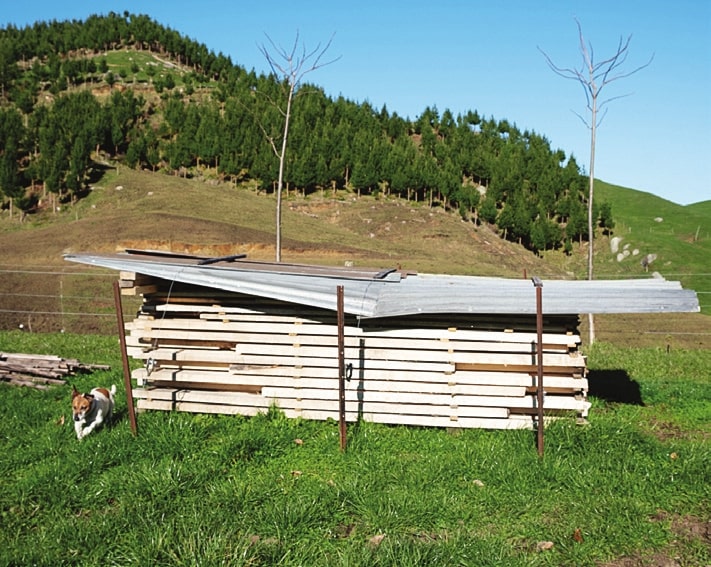 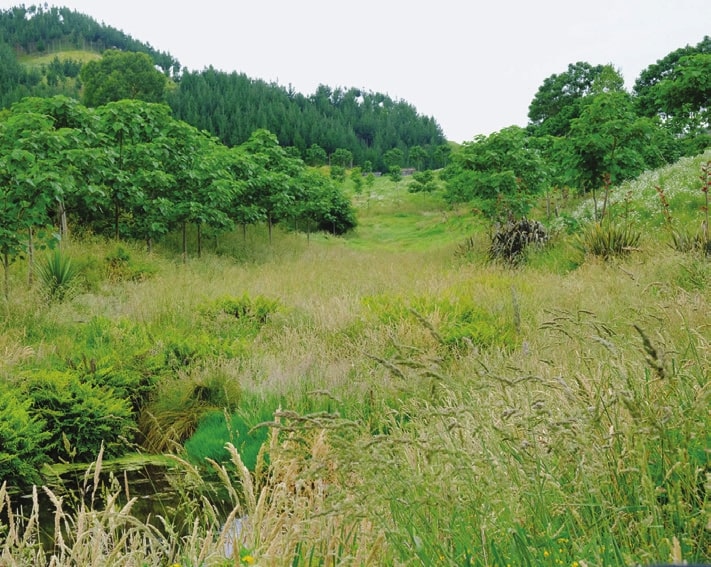 The most interesting part of this property is Graham’s ability to master the tree species paulownia for the benefit of his cows, pasture, fodder, shade and timber. Paulownia trees are deciduous, have a very soft bark, coppice when felled and sprout off their roots if they damaged by the cows’ hooves. Graham uses some of these sprouts which are dug up to grow in the farm’s nursery. When pruned, they are planted out with roots and soil. Iron standards with insulators a metre each side of the trees carry an electric fence wire to stop any amorous cows ‘love of the bark’ behaviour. To date the spacing of all these trees has been five metres in long rows, but this is changing to 15 metres, still with the opportunity to have the whole farm in the Emissions Trading Scheme.

Pruning is carried out annually, normally in the autumn with a hand pole saw. The cows eat the prunings as soon as the branches hit the ground first eating the palatable leaves then twigs, leaving only the larger branches. These are soon sawn to lie flat and are picked up by the tractor with front end forks and stacked in a heap to burn later. The final height of pruning is seven metres to let the sunlight in and to keep the pasture growing. The countryside in February was very dry as little rain had fallen, but the pastures were green due to partial shading, and the paulownia leaves being good supplement fodder.

When the trees have a diameter at breast height of 100 cm or are 26 years old they are ready for harvest. The trunk is transported to a local sawmill, the timber is fillet stacked, bound by straps and return to the farm to be air dried. Once dried to Graham’s requirements, the stack of 100 mm by 50 mm and 150 mm by 50 mm timber is ready for grading. Any faults in the timber are sawn out, and each plank has its length written on the end and placed in a large timber rack ready for sale.

The niche market for this clean white, light timber is small but increasing. It is used for yacht and motor boat interiors, surf boards and model makers as it is light, stable and moulds easily. Graham manages this market and is very keen that it is not over-supplied, so monitors the supply chain carefully.

There is a succession plan. One of Graham’s sons, who now manages a large dairy unit, would like to come home in a few years and manage the dairy farm. Graham will then continue his tree planting, silviculture and harvesting. With more paulownia planting within the requirement for registration with the Emission Trading Scheme, another income can be generated with annual carbon units.

Service to the community

Tess is very involved with lodge accommodation and farm activities, taking stunning photographs, some of which have been used in this article, and is President of the local camera club. Graham has been involved with the Mangatutu River Catchment group and worked on the Waikato Branch stand at the National Field Days. He has been involved for 15 years in the Waikato Regional Council – Waipa sub-committee for management and costs in the Waipa catchment erosion and river work.

He has been a member of the Waikato Branch, on their committee for 10 years, their newsletter editor for six years, attends branch field days and has held them on Miraka Farm. After having the Country Calendar crew film their property, 140 mainly dairy farmers, attended an eye-opening field day.

In 2015 Graham and Tess were awarded the Landcare Trust Award for Innovation in Forestry. Now they richly deserve the NZFFA premier award, the Husqvarna North Island Farm Foresters of the Year 2020.