A project to find some solutions to the challenges of small-scale forest grower harvesting is underway, led by members of the NZFFA. One element of this project is an evaluation of machines
and harvesting systems currently operating which are suited to small-scale forestry. The first of these reviews features a Valtra agricultural tractor, owned and operated by Seaview Logging.
The evaluation is being carried out by the Forme Consulting Group, a forestry consultancy with expertise in forest engineering and work-flow studies.

High harvesting costs are known to be a major cause of disappointing harvest returns for small-scale forest owners. These high costs generally result from one or more of the following −

Many 1990s woodlots were planted in places which are difficult to access and often quite a distance from the nearest road. As the time to harvest these woodlots approaches, harvesting and marketing managers often have little option but to advise owners that a new road is needed to enable log trucks to travel to skid sites close to the woodlot. There is little choice because of the scarcity of crews and equipment suited to small-scale operations. Small-scale woodlot owners usually have to accept a scaled-down version of the systems used in large-scale forestry if they want to harvest their trees.

A new road can be a valuable asset to a farm or a forest grower in the future. However, the cost of road building, when combined with the costs of felling, extraction, and log transport, often swallows up a large proportion of the value of the trees for first harvest by small-scale forest growers.

One alternative to building an expensive road into the woodlot is to find a way of transporting or forwarding the logs to a load-out point close to the public road without damaging farmland or existing roads and tracks. Two-stage or forwarding systems using bush trucks or forwarders are uncommon in New Zealand, although there are one or two notable exceptions working in niche environments.

The good news is that a recent introduction to the small forest harvesting sector in New Zealand is the Valtra series of agricultural tractors. These are tractors which can be adapted for forestry work. One such Valtra T174 model is in operation in logging contractor Seaview Logging’s farm woodlot harvesting operations, based in Katikati in the Bay of Plenty.

The tractor set-up is unique in that the tractor’s power take-off is connected to a locally designed log trailer which allows the trailer wheels to be driven via a gearbox and differentials. A conventional trailer without any of its wheels being powered would be incapable of operating on any wet ground or slopes with large loads, even in the summer months. In addition to this, the forest-specific cab is appropriately guarded and recognised as being a compliant protective structure against falling objects.

Seaview Logging’s complete harvesting system consists of a range of equipment including the Valtra tractor and forwarder. There is also a Tigercat 855 leveller equipped with a Satco felling head for felling and processing in the bush, a Komatsu PC200 for shovelling and loading in the bush and a Hitachi excavator loader for truck loading at the landing. All machines apart from the tractor are older ones, bought second hand and therefore more likely to be economic in woodlots with low productive hours. 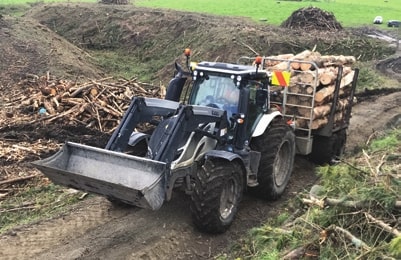 The logging crew consists of three people. The owner who operates, loads and unloads the tractor. The Tigercat operator who controls the bush operations including hand-felling as required. The third is a parttime crew member who undertakes occasional tree felling on fence lines and other tasks as required.

During our work-study of the Valtra tractor, the crew was harvesting a small forest located approximately 1.5 km from the log accumulation and load-out site near the front of a farm. Logs were loaded on to the forwarder in the woodlot and transported across a paddock, along farm raceways and a farm track. The trailer carried loads of between 10 and 15 tonnes. 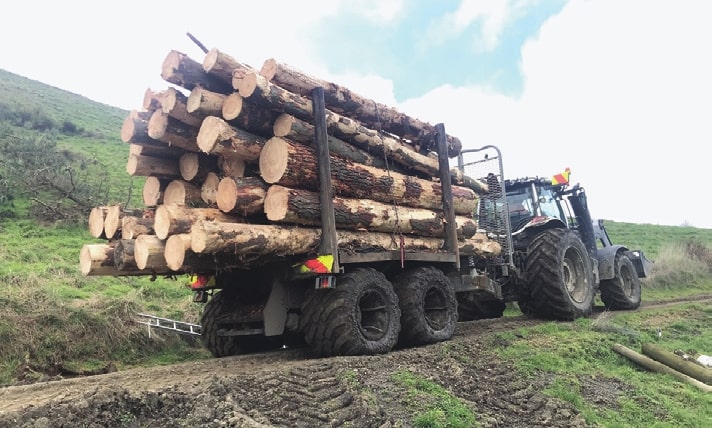 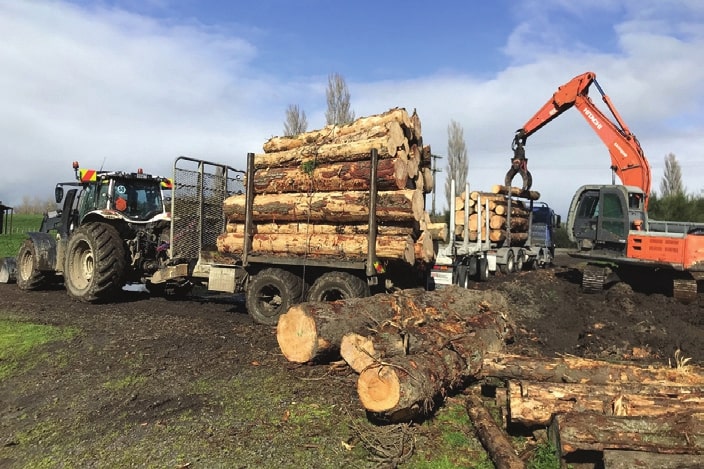 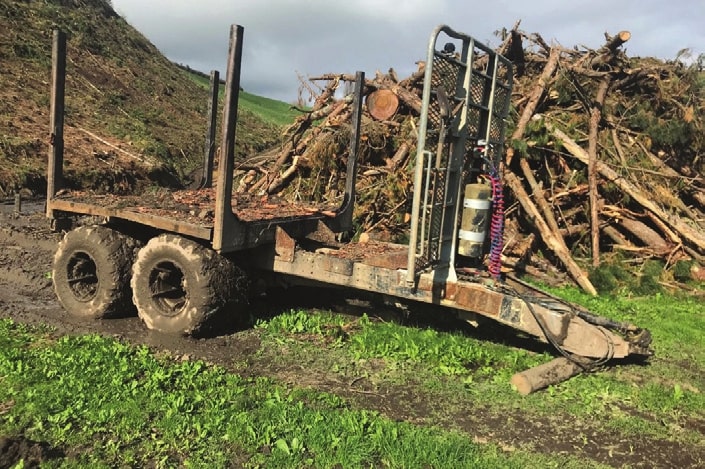 Our evaluation aimed to assess the overall efficiency and productive capacity of the forwarding operation.  Factors such as travel distances and speed unloaded and loaded, travelling speed on different surfaces and slopes, cycle times, daily production, and operating costs were all evaluated. The data collected can be used for comparison with other harvesting systems. Examples of
the type of data collected are shown in the table below.

Calculated cycle times relate to two routes followed by the tractor, direct and indirect depending on the weather. Once basic cycle times are known, further calculations can then be made to generate data which shows machine productivity in terms of the number of cycles per day and tonnes extracted each day with different payloads. The term S1 is for a metalled milk tanker road on the flat, S2 for metalled milk tanker road with a slope plus or minus 10° and S3 for a cow race or bare paddock.

Our job was not to undertake a financial evaluation of the complete harvesting operation but to assess the Valtra machine’s suitability for small-scale harvesting. The basic costs in the table highlight that owning and operating even a relatively small machine is not a cheap option.

Overall, the conclusion we reached was that the Valtra forwarder provides a cost-effective and practically viable option as part of a system for harvesting small woodlots. The set-up was well suited to the task of transporting logs across paddocks and on farm tracks.

The main benefits we saw of using the Valtra system included −

The forestry adaptions available include an extra-protected forestry fuel tank and fully compliant cab guarding, roof protection and polycarbonate windows. The Valtra could complement a corporate forest owner’s suite of contractor resources for tidying or completing those parts of the forest stand which are hard to access and which might prove uneconomic or challenging for specialist equipment.

The Valtra can operate on public sealed roads to a maximum speed of 50 kph meaning that transporting logs to a load-out site via the road and repositioning by driving between jobs is a possibility. While high production is unlikely to be the major reason for selecting a machine such as this, versatility and ability to complement other machines and equipment within a woodlot harvesting system are important advantages.

The system can operate with only minor disturbance to day-to-day farming operations. Using something as familiar as a tractor is likely to be less intimidating to a woodlot owner or farm forester in terms of the perceived potential for damaging the environment and farm infrastructure. This means the harvesting operation is likely to be more readily accepted and less stressful for all concerned.

Anyone interested in the technical details of our evaluation can find a full report in a Forest Growers Research Technical Note, available on the website at www.fgr.nz. Further evaluations of small-scale harvesting machinery will be reported in the Tree Grower.