Action Groups weekend in the Waikato

The Waikato branch of the NZFFA hosted a two-day event to show around 85 participants several properties with stands of special interest species. We were pleased to have such a good turnout from all over New Zealand, and the level of interest and discussion made the weekend a real success.

We started the weekend at on Saturday morning at the woolshed of Ian and Heather Wilson’s Rangitoto property with a real King Country style morning tea welcome. Dave Forsythe and Neil Cullen opened the event with a run-down on the programme, safety briefing and noting the significance of special purpose species in the new forestry environment. Russell Knutson kindly demonstrated his portable Jacson3 Cube and on-farm washdown equipment for biosecurity decontamination so that all the visitor’s footwear was deemed sanitised to begin the farm walk.

A fleet of vehicles set off through the farm to the main stop of the morning to see a magnificent stand of redwoods 65 years old which Ian’s father had planted. Considerable discussion followed about how the small stand could be managed. The consensus was that some thinning could be undertaken without compromising the majesty and continuous cover of the stand.

We then walked on to a pine block which was in the process of being harvested and there was considerable debate over the merits and use of an edge planting of Eucalyptus nitens which was being harvested. While Ian Wilson could not find any real value, several in the group noted that there are niche markets for nitens flooring in Christchurch as well as for sawn timber.

Otewa for poplar and blackwood

After a drive back and a detour via Ian’s mother’s extensive garden, the group moved on to the second stop at Ian and Heather’s home property at Otewa. This is a 200-hectare deer farm with a poplar and willow poles nursery and a sawmill. After a drive around the property we went to the sawmill site to discuss poplar and blackwood sawing and use. Ian saws a lot of farm grown Italian hybrid poplars to make treated deer posts and strainers to replace all the pine fence material on his deer fencing. He is adamant the poplar posts do not suffer any breakage, have no knot faults and are far superior to treated pine.

The blackwood story is one we have become familiar with – if the demand can be increased the product can be found from quite an extensive saw log resource. Well dried, stable sawn timber does fetch good returns, but marketing appears to be the bottleneck.

During lunch in the woolshed we received presentations from Grant Blackie and Paul Smith from the Waikato Regional Council on tree planting incentives under the Waipa catchment plan, an update from Neil Cullen on national issues, and a commentary from Tim Forde on poplar use. We then moved off to the afternoon venue on Dave and Sue Forsythe’s dairy farm at Te Kawa.

We visited two sites on this property – the first a stand of Cupressus ovensii, aged 15 years which had recently received a thinning. The trees are of exceptional form and the feeling from some commentators was that it would benefit from a production thin if the right equipment was available. There were no qualms about recovering sawn timber from extra thinning which would enable the crop trees to increase green tops and diameter.

The second stop was a stand of recently pruned totara where Dave Bergin provided a good commentary on management of indigenous species, and discussion ranged for a lengthy period. An area of redwood had been established adjacent to the totara which showed considerable promise, and which also generated a fair amount of discussion on merits as a plantation species and optimal management regimes. Quite a number of attendees had a strong interest in redwood. Redwood has many attributes as a timber species and for carbon sequestration and we can anticipate an upsurge in plantings. The day concluded with afternoon tea at Dave and Sue’s. 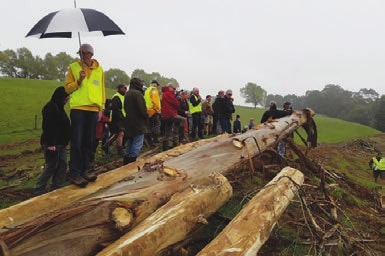 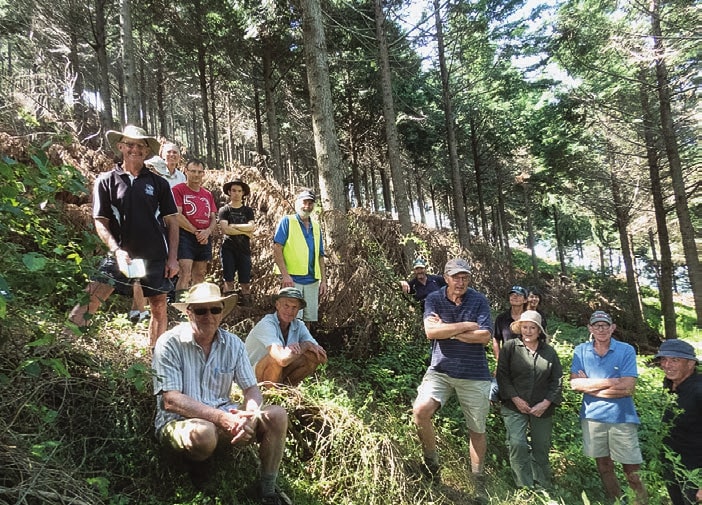 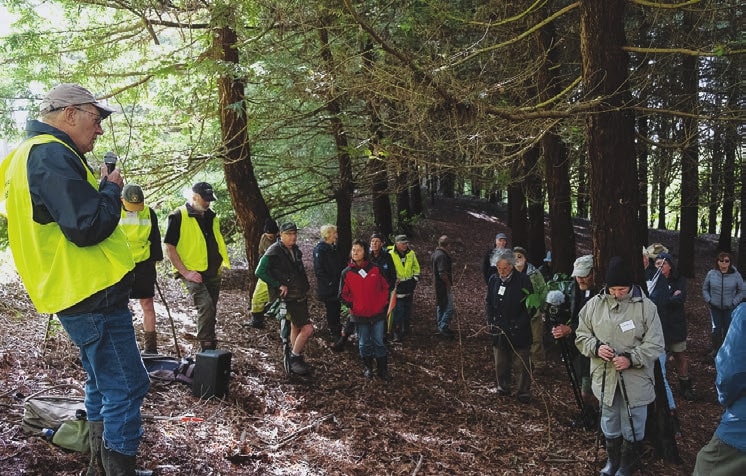 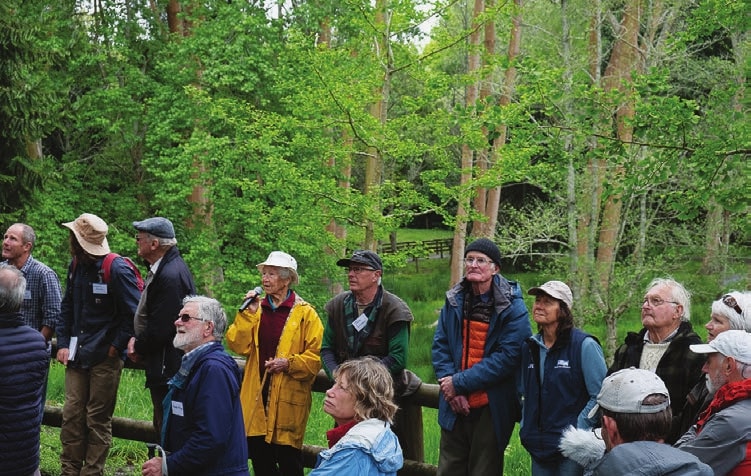 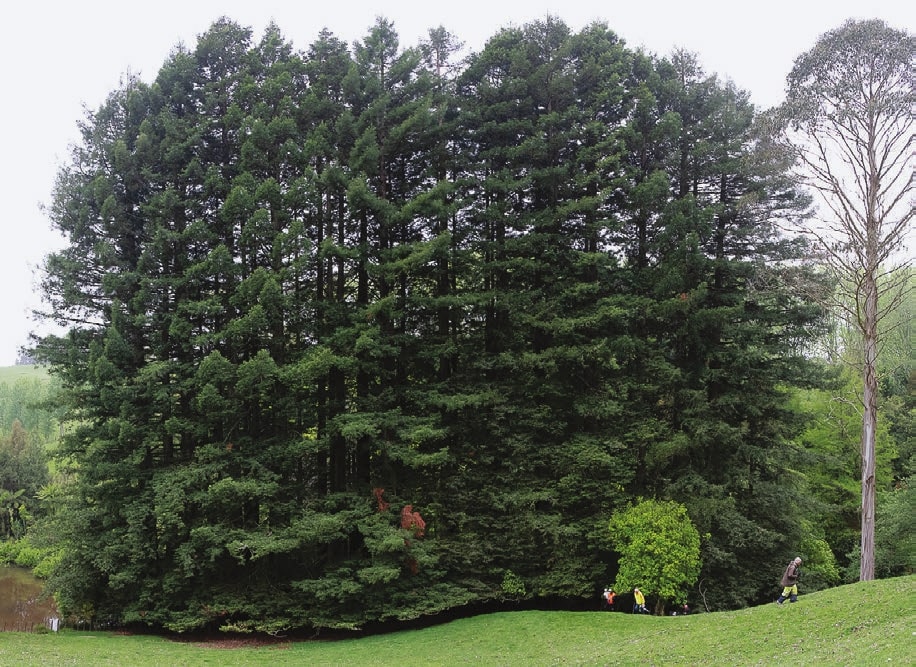 The Te Awamutu Sports Club was the venue for the evening event where a good crowd of about 75 enjoyed a few drinks, a buffet meal and an after-dinner address by Alan Saunders, the Biodiversity Programme Leader for Waikato Regional Council. Alan has a lot of experience in species management going back to his initial training with the Wildlife Service, then as species manager for the Department of Conservation, followed by ecological restoration director for the South Pacific Commission. He is a passionate advocate for conservation and bringing species back from the edge of extinction, as well as being a tremendous speaker.

His presentation covered the biodiversity challenge for the Waikato and used national and international case studies to illustrate his address. He was a very well received speaker and many attendees commented on the quality of his presentation.

Mount Pirongia on the second day

Ian Brown’s property on Mangati Road on the south eastern slopes of Mt Pirongia was the first venue for the second day. Ian is well known in farm forestry with a strong interest in all tree types but particularly blackwood, cypress and redwood. His first stop was to illustrate the merits of genetic improvement in radiata pine in a small block planted near the front of the property. Some 20 years ago he had taken cuttings from some GF 20+ trees planted on a block he part owns in Whanganui, struck them in his garden in Hamilton, and planted them in threes with two GF14 or standard stock available at the time. The superior growth and form the GF20+ trees show now are so clear that no-one could dispute genetic improvement.

Next stop was the Kuser redwood trial established about 15 years ago to test eight clones in four replicates. Ian gave a detailed account of the trial layout and results to date. There are some clearly superior trees generally based on their home altitude and latitude in California. This trial shows the clones which should be promoted, at least in the Waikato and King Country area.

The group then moved on to the blackwood clonal trial established by Ian Nicholas around 1998 where he planted replicated blocks of a range of blackwood from varied sources in Australia and Tasmania. No management has been applied and it is plain to see the selection which has done well, but the majority have failed to show any real potential in growth and form as timber prospects. The last stop was a block of 26 year old blackwood in a gully fringed with Cupressus lusitanica. There are some superb trees in this stand and well set up for a continuous cover forestry regime.

Ian described the planting and silvicultural regime which he pursued with the blackwood. He planted them in threes, one metre apart at eight metre centres, with very early form pruning at year two onwards, then selecting the dominant tree of the three to become the crop tree. After a considerable period of discussion and a walk through to view these superb blackwoods, the group had morning tea from a thermette or Benghazi burner out in the field on a wonderful Waikato morning.

Most of the group continued north via Pirongia village and re-convened at Taitua Arboretum on the west side of Hamilton city. Taitua, a 30-hectare arboretum, was developed and given to Hamilton city by John and Bunny Mortimer, long-time stalwarts of the NZFFA. Bunny was keen to guide the group around the arboretum and explain their rationale and design for the beautiful layout of trees and pasture. There are many varied collections originating from John and Bunny’s numerous Dendrology Society trips to China, North and South America, Europe and Australia.

Taitua hosts over 100,000 visitors annually, and is regularly visited by runners, mums and dads with pushchairs, gardening group tours and wedding parties. Hamilton City Council has established an advisory group to help the council in managing and developing the asset. The advisory group and Bunny are currently working on developing a wetland area in memory of John who passed away earlier in 2018.

Of interest to farm foresters is the farm forestry block which John initiated consisting of low stocked radiata pine high pruned with grass cover underneath eucalypt and poplar plantings. Taitua endeavours to use the timber produced on the property for structures and landscaping, but is often compromised by the small scale, access difficulties and boundary problems which many small-scale growers experience. The group had an enjoyable walk with many renewing acquaintances with Bunny, who was thrilled to be able to host such a keen and interested group.

In summary, it was a very well-attended Action Groups weekend, with representatives from many parts of New Zealand as well as two from Australia. The Saturday evening dinner was enjoyed by all, and the only downside to the weekend was Stan Braaksma losing his car keys at the first stop. Thank you to all the attendees, the hosts of three very diverse properties, and to Bunny for her guiding at Taitua. The two organisers Dave and John appreciated all the assistance they received, and both took off overseas during the following week, relieved all had gone to plan.