Action from the action groups

In November the action groups met again for another weekend concentrating mainly on alternative species with a smattering of indigenous. We started with a morning inside, hearing from Paul Millen about the latest in what is happening with specialty timbers, the new funding and the potential for the next few years. Then we went out into the sun for the field day visits. This article will start with the field visits and then follow with a summary of the presentation from Paul.

The first visit was to Richmond and Plankville Ltd. This is a small company which specialises in using alternative timber, mainly eucalypts and cypress. They said they do not want to have treated pine on their yards.

Their main product is the humble shed, but built in sections for easy construction by anyone who buys them. The sheds are not cheap, around three times the cost of the steel sheds available from many hardware outlets. But they are designed to last a lot longer.

They are generally sold as kit sets taking a customer between four and six hours to put together. The biggest demand is for those under 10 square metres as this size does not normally require planning consent. They are sold via a website and a display somewhere in Nelson.

The shed sides are made from eucalypt with macrocarpa as cladding using quite small trees even those from production thinning. They pay between $100 and $120 a tonne for delivered macrocarpa which they admit is not a great price but covers cost of thinning.

The structural timber comes from Eucalyptus obliqua, E. deligatensis or E. regnans none of which is especially durable but will survive well as a frame. The good heartwood is made into the flooring and the upper logs are not used but go for firewood. Apparently tall trees are not useful but short fat trees are better as the lower part or butt log is the best for structural timber, the upper logs less so.

The timber is all sawn on site, a process we were able to witness later. From the price they pay for eucalypts of around $70 a tonne, some quarter sawn for flooring is sold at $1,700 to $2,000 a tonne. It does have to be dried and that takes quite some time as it has to be air dried. Some of the lower quality eucalypt wood is made into garden sleepers, even though this is mainly E. regnans and not naturally durable.

We then moved on to see some milling of fairly poor macrocarpa and then a length of E. regnans. Even with the two small WoodMizer mills it was a fairly straightforward and rapid process to reduce the logs to sawn timber which then had a significant higher value, especially when used in the sheds.

At action group weekends we get the opportunity to see a small mill producing high value timber from eucalypts or macrocarpa. It would be nice to think that we could have another couple of hundred or more around the country milling, adding value and selling alternative timber. 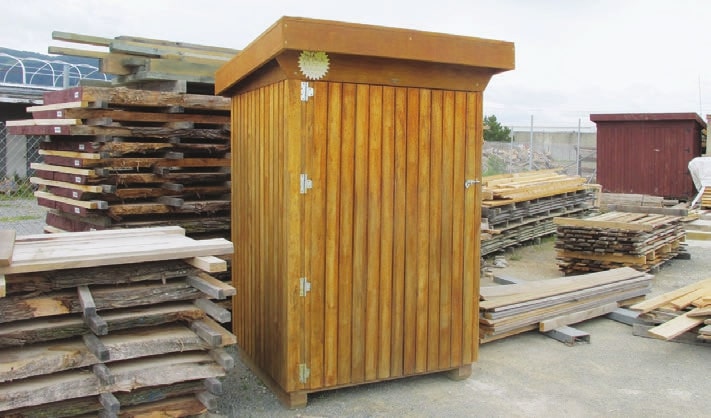 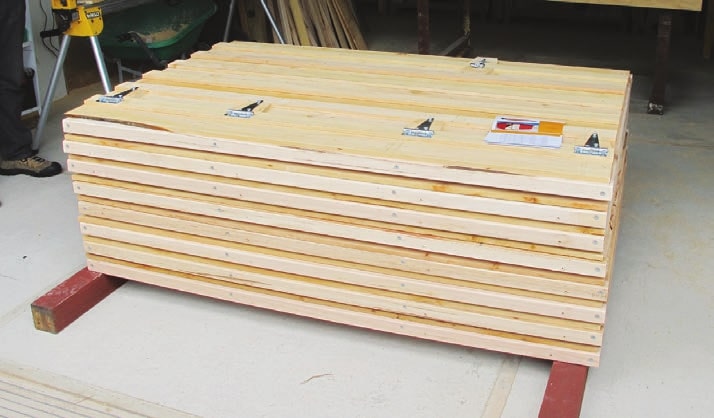 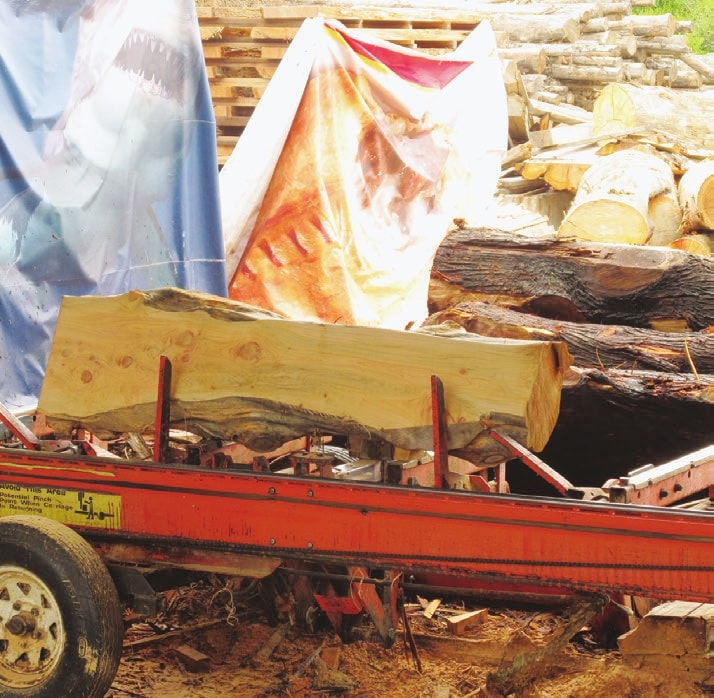 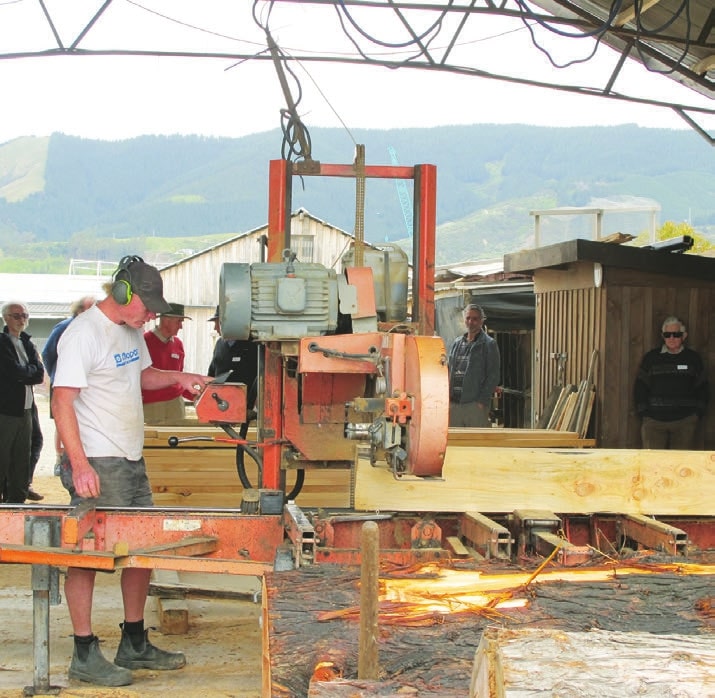 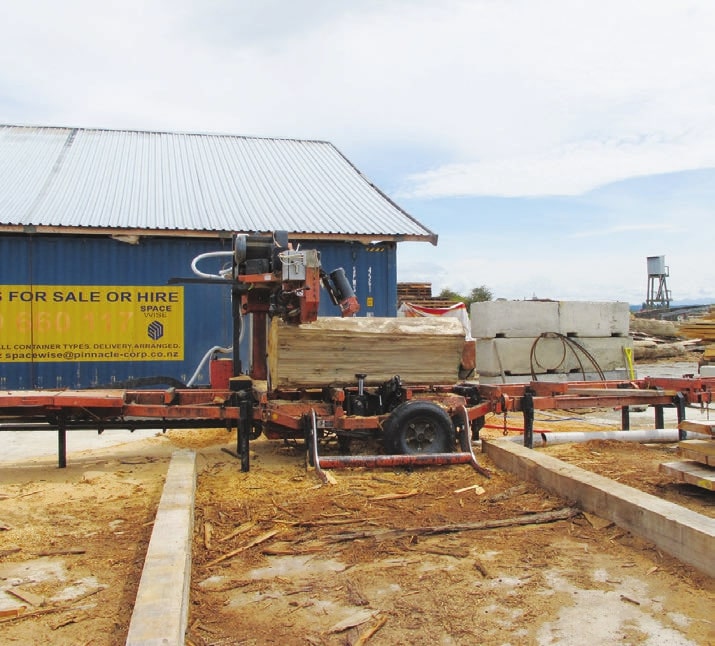 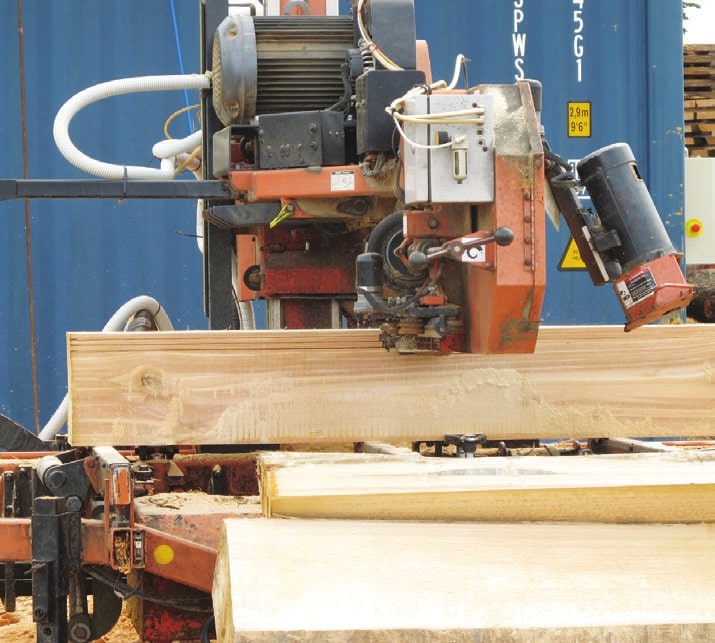 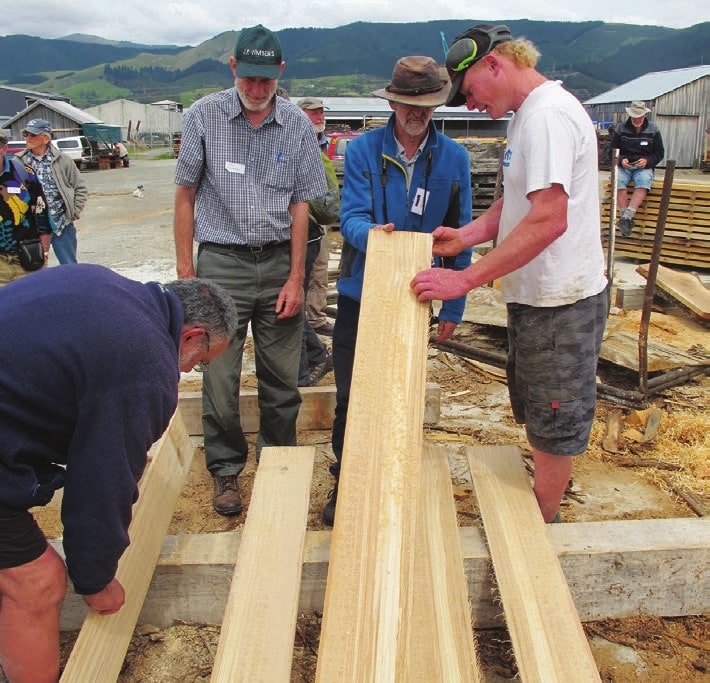 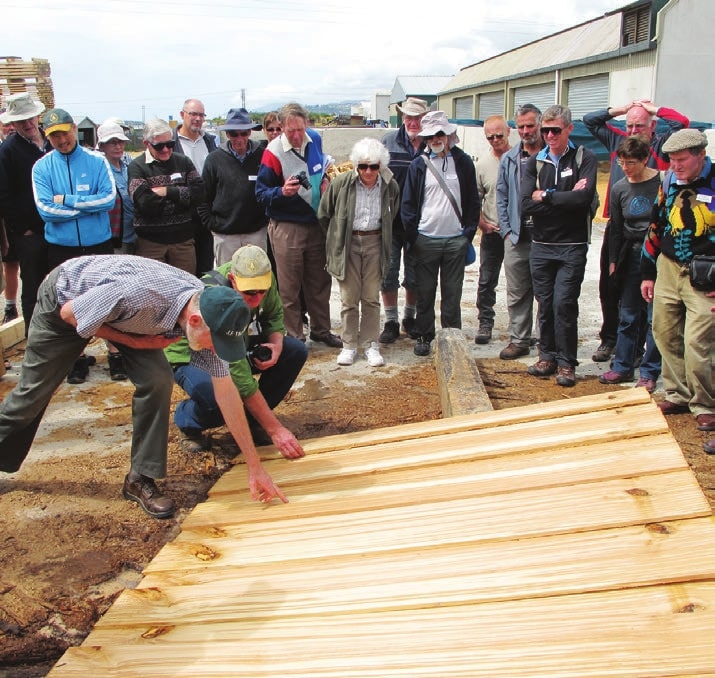 The second visit of the day was to Frank’s Nursery. The nursery started about 10 years ago with just 100 plants and has grown slowly since then, supplying customers from Invercargill to Auckland. Today was an opportunity to see a different way of making money from trees, but not available to everyone. You needed the skills of someone like Frank who seemed to be able to graft almost any plant on to any other plant.

Frank and Tracey have 20,000 trees in their nursery which are mainly grown in open ground grafted on to different rootstock, although 6,000 are also growing in planter bags or pots. They have many different varieties and often graft on to a base so that the trees grow to a specific height as specimen trees.

The trees in this nursery are not what we might use as farm foresters because they are mainly species such as ash, liquid amber and elm. The nursery produces their own specific varieties of trees, some of which they licence, an example being an upright pear is which has just been released. The cost for obtaining and maintaining these rights is long-term as someone from the Ministry for Primary Industries visits and checks things regularly. Getting plant variety rights is often quite straight-forward but it has to be checked for the first three years during spring and autumn.

We had a look around most of the nursery seeing the large range of grafted trees which Frank seems to excel at. These trees are often sold to new housing sub-divisions where they want virtually instant trees. However, it seems that customers are not always familiar with planting trees. Frank was called out to one customer who had bought a number of trees which did not seem to be growing very well. He discovered that they had put them in the ground with the roots still in the planter bags.

Frank has the costs under control and many of those on the visit were impressed, and at the same time disappointed, when Frank explained what he charges. He said that after about three years of growth and care he could get around $200 for each tree he sold. This compared to a similar price farm foresters might get for a radiata pine after 30 years in a plantation. However, the radiata would not get the care and attention that Frank and Tracey give their trees. 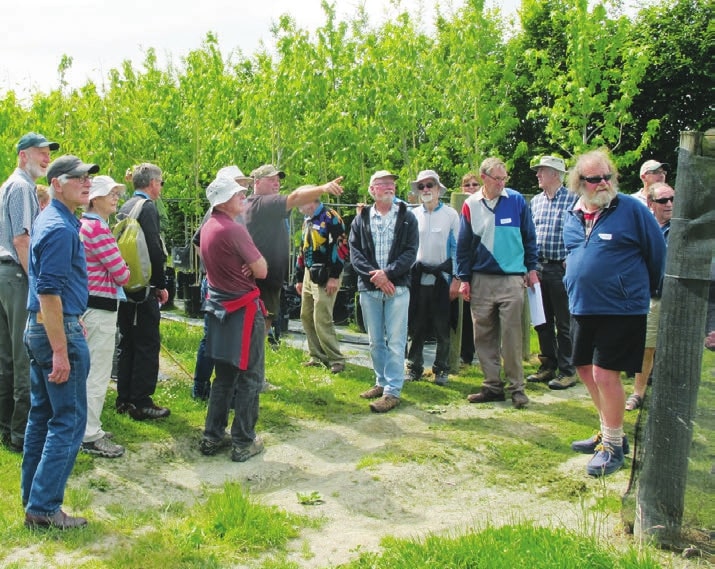 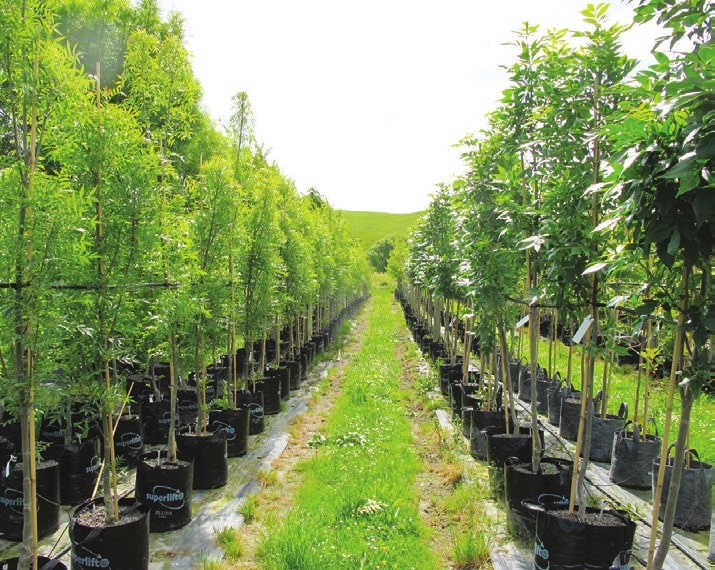 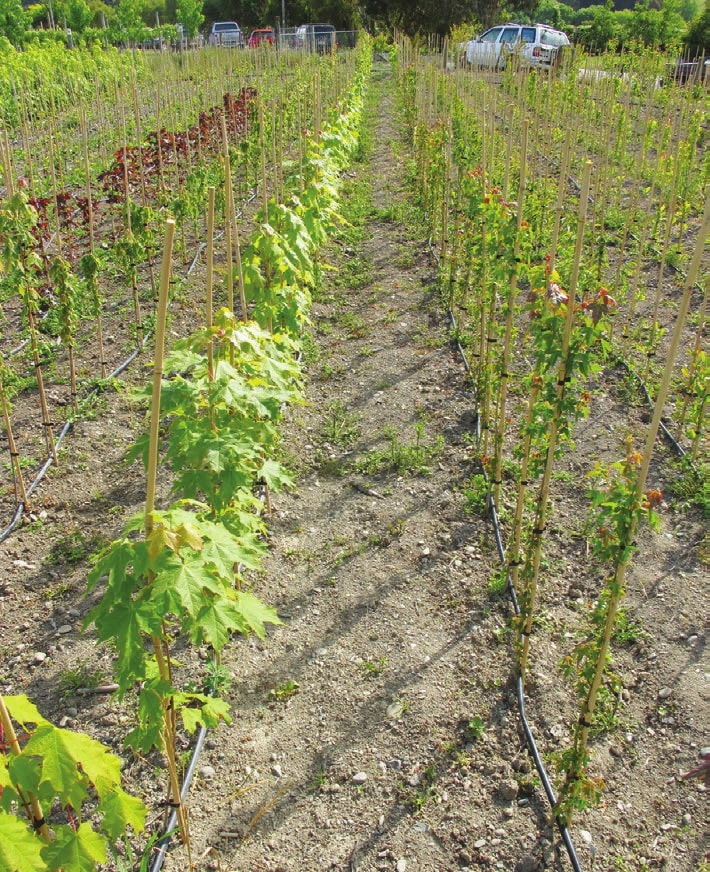 On the Sunday morning the weather again looked fine and clear although rain was promised for later in the day. However, undeterred we eventually all arrived at Robert Appleton’s arboretum, still very much a work in progress. The original 75 hectare property was purchased 23 years ago although more land has been bought since.

Robert visited Hackfalls Arboretum over 20 years ago and was told he should start planting trees in his 30s so that he could have plenty of time to do the work required. This is what he has tried to do on what he calls his Sunday job.

In the arboretum trial area Robert reckons he spends more time on weed control than on tree work. Old man’s beard is a particular problem with seeds regularly arriving from his neighbour. Barberry is also a problem with gorse and broom mostly under control but the seeds are still there.

Robert chose the land because he knew it well and it is a better class of country for tree growing. He is planting the arboretum in geographical areas to help him remember where the trees are which he has planted, such as those from California in one area and from Mexico in another. He admits that growing rare and unusual trees is very difficult.

Most of the farm is leased out for grazing so he has to make sure the tree protectors are not put under pressure. The cost for tree shelter can be $10 to $15 each which adds up when there are a lot of trees. He is trying to avoid growing them in plantations and lets them be in more open land so they can show the true shape or form. He aims to plant five of each provenance, matched with another few groups of five to find the ones with faults which are then removed, allowing the others to cross pollinate to give a hybrid, which should be an improvement.

We then walked through a number of small plantations, the first being one of redwoods inter-planted at 800 stems a hectare among pine and Douglas-fir due to past failures. It is working well and pruning is starting at age seven.

We then moved into areas of Eucalyptus obliqua and then among a variety of cypress clones some of which had problems with canker. We also saw some western red cedar but Robert thought the land was too dry for them.

We travelled a short distance to look at another series of plantations where more weed problems had been dealt with. Recently harvested sites get a lot of weeds and in an area where some old radiata pines had been removed a helicopter was used for spraying at a total cost of around $12,000. This seemed a high price but we were told it was cheaper than getting the work carried out manually.

Robert explained in detail what he was doing and why he enjoyed it, but there is not enough space to put it all in wiring. He invited us all to come back at any time for a more detailed look when we had more time to look and enjoy the trees. 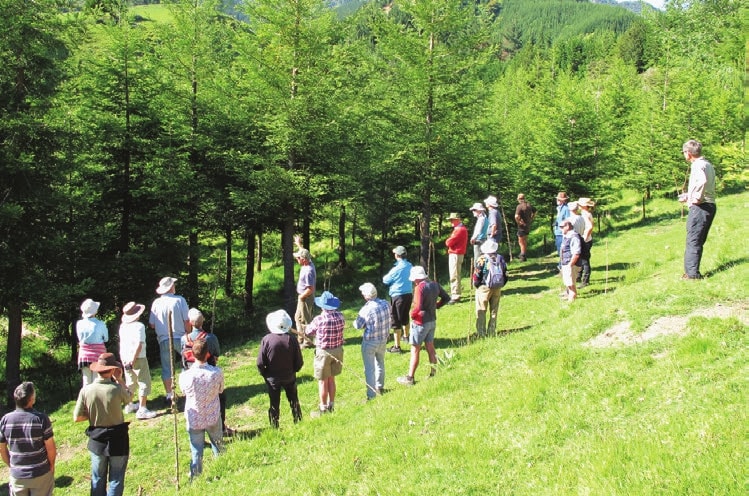 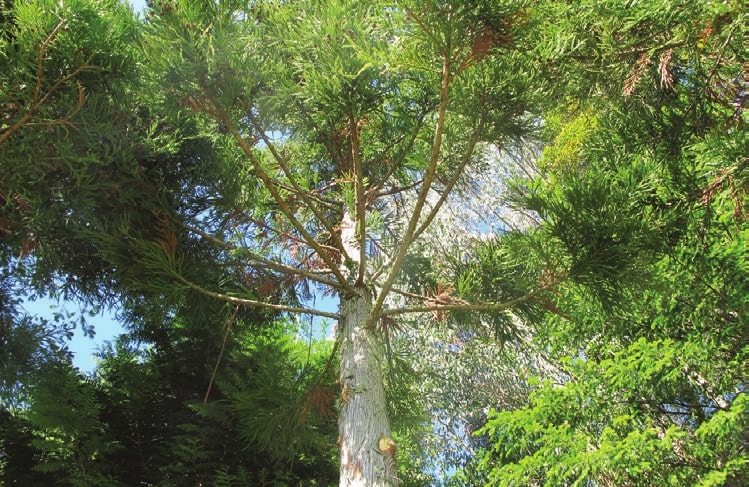 From gorse paddock to dream property

The final visit of the weekend was to Bevan Walker’s property of 70 hectares. When it was purchased in 1971 it was one big gorse paddock. Bevan and his father planted radiata pine and some Douglas-fir which are now 44 years old and pruned to 10 metres. Some Eucalyptus regnans and E. nitens were also planted for firewood but were growing so well that they have been pruned and left.

We were able to look at a great variety of trees, many of them pruned to heights we can only dream of. However, the problem I found was that unless you were at the very front of the group, by the time you got to where Bevan was speaking, virtually all the story had been told. This was a shame as the trees were generally amazing and the story of the work involved must be fascinating.

We did see a plantation of 34-year-old pines, the pruned Douglas-fir, the redwoods which replaced macrocarpa removed due to canker and finally some lusitanica planted about 17 years ago. We also heard about Bevan’s pest control which has included all the usual suspects such as possums, rats, stoats and cats. With luck there will be another site visit one day which can be written up in more detail. 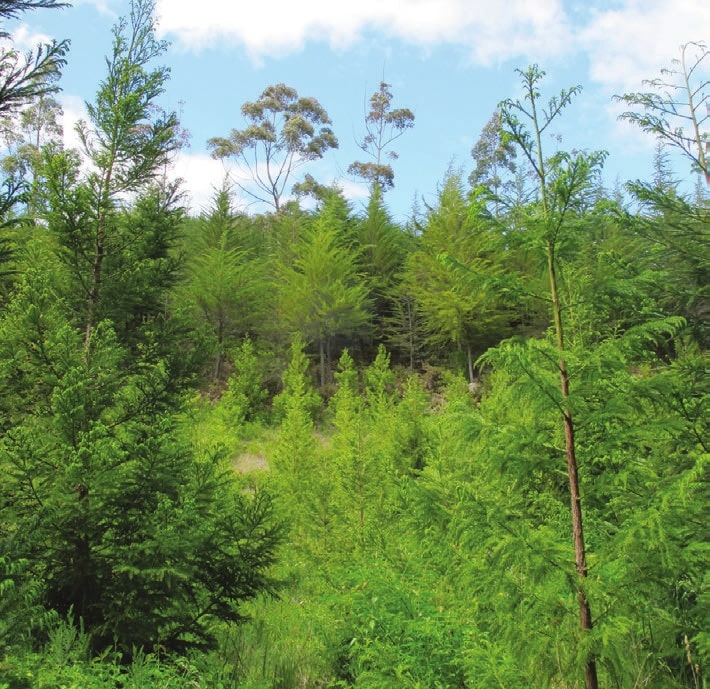 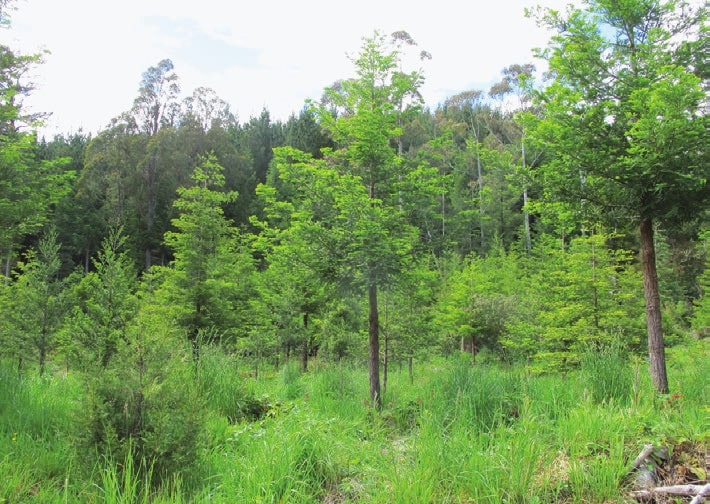 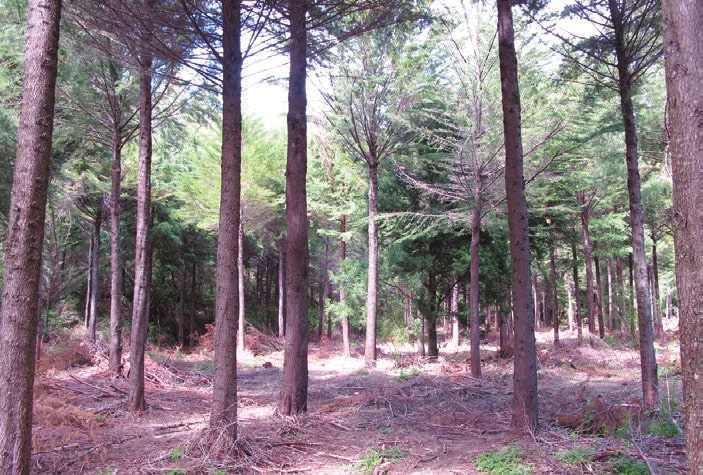 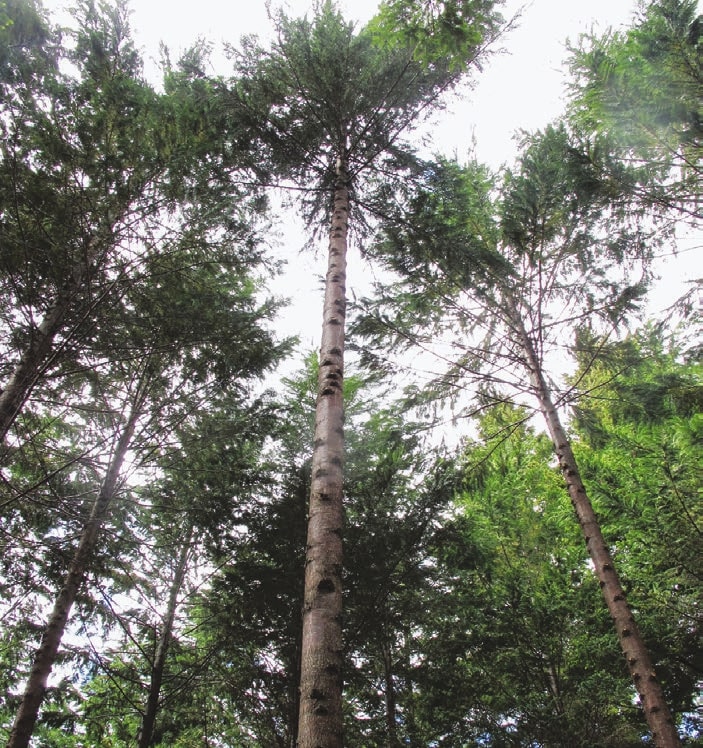 It was a weekend of contrasts. The first two field visits were to people who were making a living by growing or manufacturing from alternative species. The second visits were to properties where money was not the driving force, but the enjoyment of planting growing and managing trees, mainly alternative species but with a few radiata pine as well.
These action group weekends are getting better and it was a shame that the attendance was much lower than last year. Hopefully 2016 will bring the numbers of attendees back to around 100.