A glance at the Tasman District Council and Nelson City Council websites shows that Tasman District is a large area. It covers 9,786 square kilometres and is bounded to the west by the Matiri Ranges, Tasman Mountains and the Tasman Sea. To the north Tasman and Golden Bays form its seaward edge, and the eastern boundary reaches the Spencer Mountains and the St Arnaud and Richmond Ranges. The Victoria Ranges are the southern boundary and the district’s highest point is Mt Owen at 1,875 metres.

The landscape is diverse. Large mountainous areas, valleys and plains which are sliced by such major rivers as the Buller, Motueka, Aorere and Takaka.

Because the Tasman District covers such a large area it cannot be characterised as having any single climate. Overall, the climate is temperate, reliably moist and sheltered. However, there are many aspects of local climate that are extreme outside that generalised range. The inland valleys have intense winter frost, the Tasman Bay lowlands regularly have summer drought and the north west coast and the mountains can be hammered by wind.

Perhaps the most significant aspects of climate in the district are the gradients. In Golden Bay, for example, it is not uncommon for there to be heavy rain at Onekaka, while at the same time it is merely showery at Takaka and sunny at Pohara. The sea can be glassy in the bay, while on the Kahurangi coast it is blowing a gale. Similarly, it can be fine and balmy at Richmond but bitter and gloomy at Murchison.

There is a marked rainfall gradient from west to east and a dramatic temperature gradient from the lowlands to the uplands. The coastal influence does not extend far inland, but the mountains radically influence the inland climate of the district. 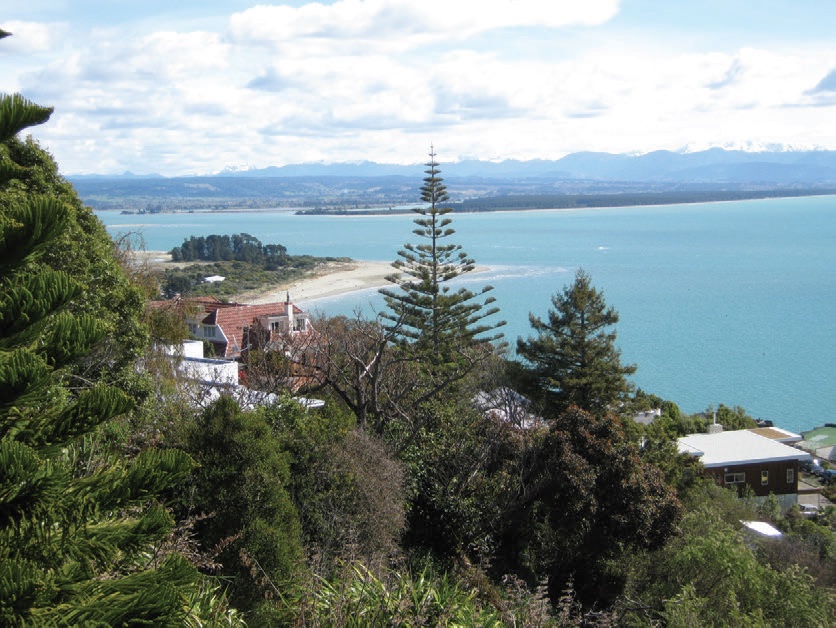 Tasman District is blessed with arguably the most diverse and interesting geology and topography in New Zealand. It has the oldest rocks in the country and has almost every rock type, including nationally rare types such as ultramafic rocks and marble. There are the crumbly granites of Abel Tasman National Park and further south, the great fluvio-glacial outwash Moutere Gravels and the big glacier-scooped Nelson Lakes.

There are pockets of coal and ranges of greywacke and schist. There are alluvial terraces and flood plains of material washed out of the great jumbled mountains by numerous rivers. The long hook of Farewell Spit, is built of sand swept around the corner from north Westland.

Large forces have separated most of the district’s underlying geological structure from its counterpart in Fiordland and western Southland, thrusting up mountain ranges in the process. Earthquake, water, frost and wind have worked away at the land, forming peaks, valleys, fans, plains, cave systems, dunes and cliffs. The sea has chopped at the land and has moved material around. The result is a district of great structural complexity.

The Nelson region is rich in history with a colourful past, and is New Zealand’s second oldest city, settled in 1841. Here are some main facts:

Even in winter we are blessed with many clear sunny days and so visitors can generally enjoy outdoor activities in all four seasons. Snow is rare on the lowlands but falls are common in the mountains in July and August. Our average annual rainfall is 986 mm.

The fine weather gives many opportunities for outdoor activities, surfing, sailing, swimming and flying, the fascination through art, the WOW factor, art galleries, scuplture, potteries flowers and fauna. Added to this is our diverse population of new immigrants from all parts of the world, to help us make the diverse region that we are.