As a couple we had always enjoyed summer camping. We continued this tradition when our two girls were young. Wellington’s climate is not its strong point and we loved the long hot East Coast summers. We found that we were returning more and more to Patangata, central Hawke’s Bay, where we had free camping and excellent river swimming in the Tukituki. Hawke’s Bay folk tend to take their rivers for granted, preferring beach holidays. We were different, and became known in the Patangata hotel, as ‘those mad bastards from Wellington’.

At that time in the late 1980s, the rural land was tightly held and there were virtually no small blocks available. But the droughts of the late 1980s were tough on sheep farmers and subdivision began to occur. A 30 hectare block, originally part of the Mangarara Station, came up for sale in 1990. It was larger than we wanted, but it fulfilled that critical summer holiday requirement because it had river frontage.

It also had a few trees - 18 hectares of radiata in thee age groups. These would be an asset, if properly managed, so the land agent said. At that time, we had no intention of becoming farm foresters. Mentor figures who gave advice at the purchase included Tony Watt, a forestry consultant who had supervised the forest establishment, and John Aitken, a respected forester and recently deceased.

Our offer was accepted by the owners, David and Isobel Tiffen. We established our base camp, an old family caravan along with a lean-to shed, introduced ourselves to the neighbours and set to work pruning our few trees with a will. I realised at the end of the first row that the intention to do the job myself during the weekends was hopelessly awry and that a more professional attitude was called for. 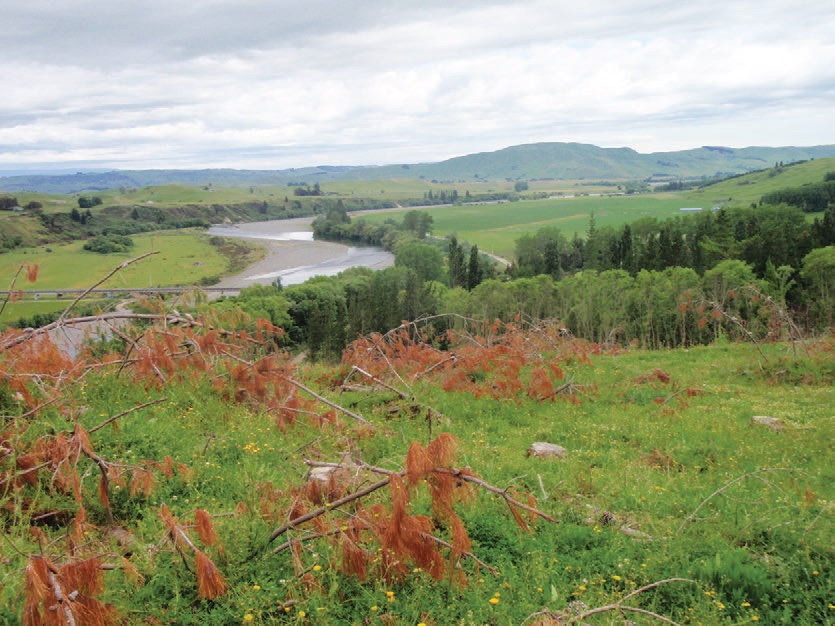 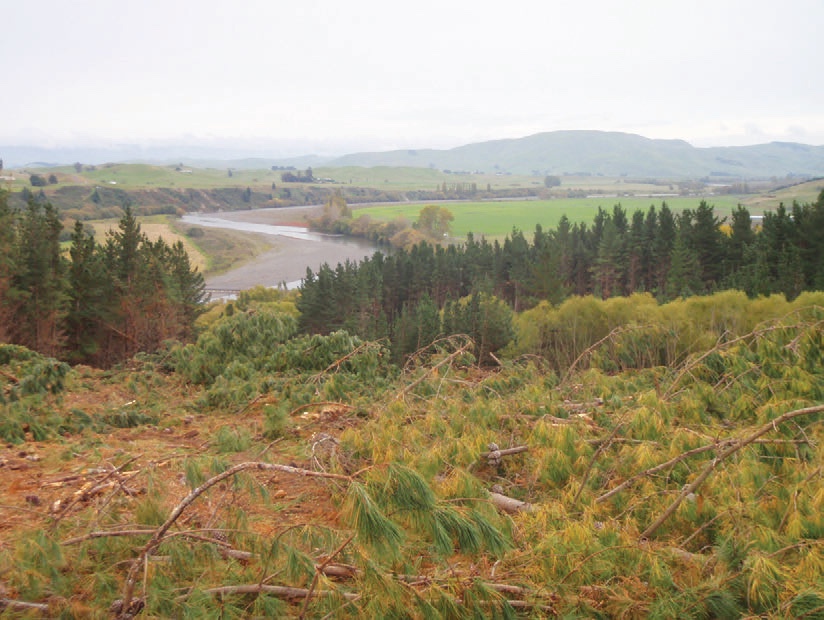 I asked around locally and found two excellent men, Nigel Turfrey and Dave Heron, willing to do the work. My role in the project was now upgraded to that of manager. I joined the New Zealand Farm Forestry Association, and purchased Piers Maclaren’s Radiata Pine Growers Manual, in order to learn the trade.

We had a five-year head start, but even growing radiata is a long haul. The log price boom of the mid 1990s − we were all going to become millionaires, was followed by the log price crash and no-one wanted to know. But we kept at it. Persistence is essential. For small and large growers alike, you cannot expect to be able to sell immature forest at a profit.

Ours was an ex-farm site, and at that time some people were advocating agro-forestry with wide spaced radiata. I am glad we stayed away from that, even although we may now attempt it with other species. 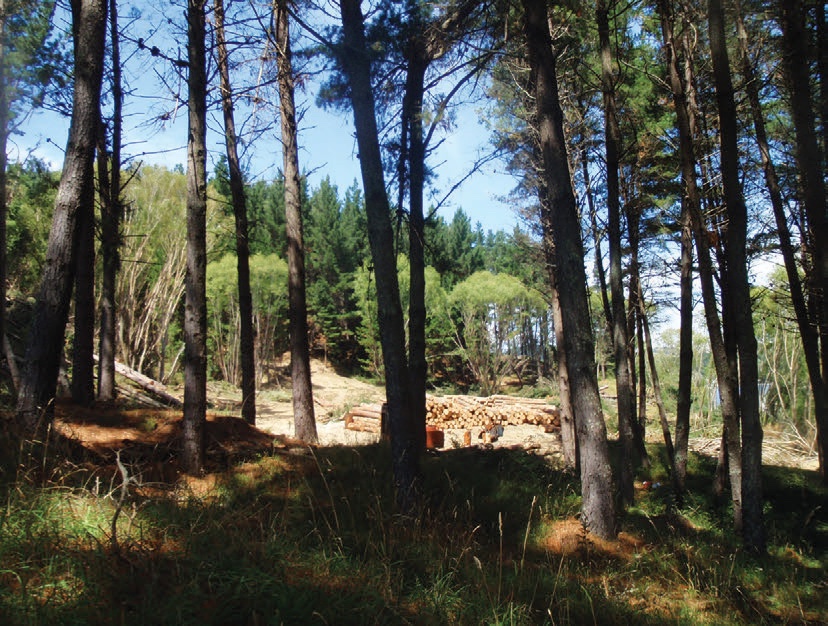 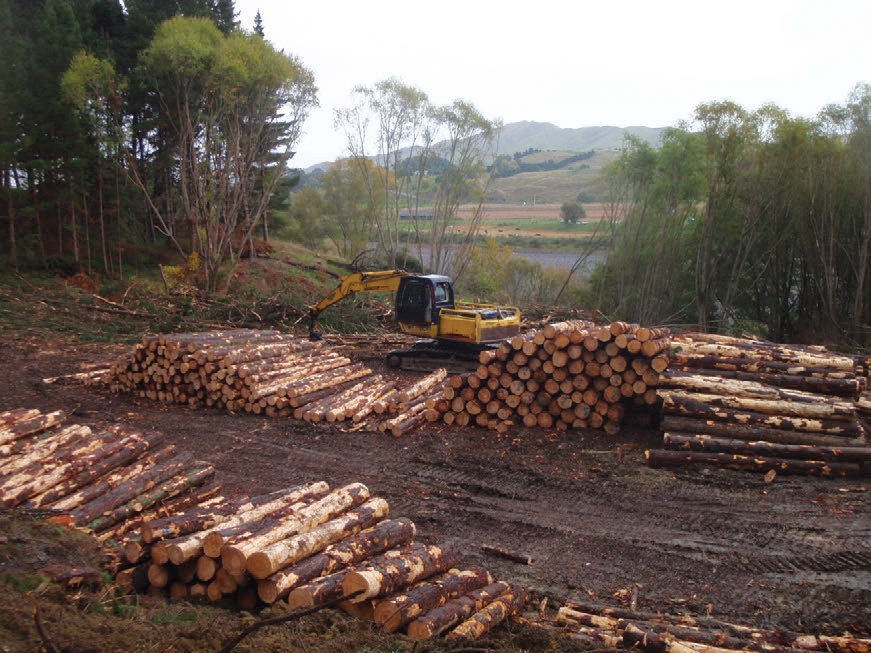 We had three blocks approximately the same size, but pruned and thinned differently. The 1983 planting was relatively highly stocked at 350 to 400 stems per hectare. The 1985 and 1986 were wider spaced at 250 to 300 stems per hectare, not by design but because during the establishment phase, trees were lost to cattle.

Which regime has proved most profitable? The growing conditions are very similar and regardless of spacing, one might assume the annual increment per hectare to be pretty much the same. The 1983 planting, where the soils are the most shallow, the stocking rates were highest and investment in pruning the least. Why was this? Because the much-talked about premium for fat, pruned butt logs has not eventuated.

Being a fertile ex-farm site and summer-dry, we needed grazing animals for fire control reasons. In the central Hawke’s Bay grass roars out of the ground in spring. But grazing is risky, particularly with cattle, and even more so for absentee owners.

Forest grazing is such a balancing act. We lost trees due to cattle ring barking them. We tried destocking completely but the summer fire risk was just too high. As the trees got older, and the farmer became more aware of what mattered to us, there was less of a problem. But it has always been an uneasy compromise. I have heard it said that older cows are the least risky, but on our scale, we were not able to dictate the terms of the grazing arrangement and restrict the class of animals present.

The trees raced away in the old stock camps. Tree growth in the wet spots was much slower, although when these eventually dried out, the trees similarly took-off. Possibly we could have lowered the average the diameter over stub (DOS) by pruning fewer trees more often, with priority to the stock camp trees. But DOS was never an issue raised by log buyers at harvest. A more intensive pruning regime may well have just added to our costs.

Wind is not really a problem in our part of Hawke’s Bay. The site is exposed to the north west, and this wind can do a bit of damage in the equinoxes. In so far as windthrow is concerned, the greater threat is the occasional south or south east storm, especially if the soils are already rain-saturated. But our site is well protected from the south.

Our annual rainfall is only 800-900 mm, and there can be months without rain in the summer. This has not proved to be a problem, at least for radiata. However as the trees got older and all available soil moisture was used up, the tree growth rate slowed right down. In our opinion, there is no point in holding the trees much beyond 27 years in this location as they just will not grow. 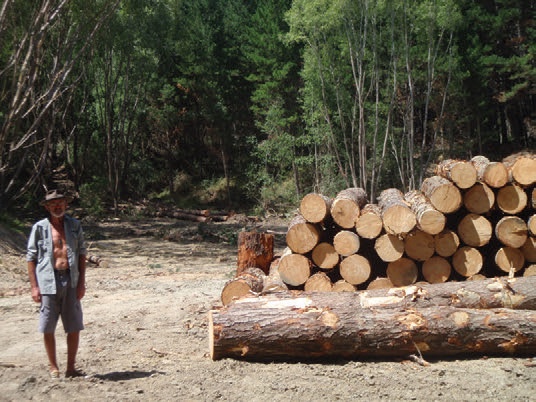 We harvested our 18 hectares over the six-month period March 2011 to August 2011. For some farm foresters, harvest time results in disillusionment and high stress. For us, it was plain sailing. No consents were needed from the regional council, log prices were good and Rob Calder, NZ Forest Works Limited, based at Masterton, managed the harvest for us on a commission basis. He proved to be an excellent manager. We had very limited day-to-day involvement, nor the associated worry.

For the financially-savvy readers out there, the total volume harvested and sold was around 10,000 tonnes. In round figures, our profit margin net of all logging costs but before GST and income tax, was around $50 a tonne. Interestingly the final result is pretty much bang on the original Tony Watt’s original estimate given to us in 1990 when we bought the place. The only problem is that Tony’s budget was 1985 dollars and we harvested in 2011.

We constructed two skid sites on the perimeter of the forest, and pretty much adjacent to public roads. It was simply a matter of taking out a section of the fence and metalling the skid site. Trees were hauled to the skid sites by means of a small bulldozer and logging arch, entire rather than de-limbed in the field. No internal roading was needed.

Within-forest logging costs were in the range $25 to $30 a tonne. Trucking cost from Patangata to Napier wharf 60 km away, was of the order of $15 a tonne.

It had originally been intended that logging would be completed in the summer because winters are often wet. In fact the logging was not completed until August. Minimal time was lost to bad weather, notwithstanding the severe storm of 26 April that devastated much of coastal Hawkes Bay, only 15 km from us. The main constraint was change of personnel within the logging crew and machinery breakdowns.

Other possible approaches to harvest

We harvested in one hit.Would it have been better to stagger harvest over perhaps three years as the 1985 and 1986 blocks were still putting on volume? Against this, unit logging costs would have been higher for smaller volumes although we do not know by how much. Our gut-feel was that log prices were on a high, predisposing to go now although we might still be proved wrong about this. We did not have the machinery, logging experience or business contacts to have even consider doing it ourselves.

Would the bottom-line have changed had we been a member of a hypothetical forestry co-operative? During the growing phase, we ourselves put sweat equity into the project. A co-operative would need to decide at what rates owners’ work might be credited, and this could be contentious. I do not think a co-operative would mean cheaper growing costs.

Concerning logging returns, and given the ups and downs of export log prices, when you harvest could be crucial. We may have harvested on a high, and if that harvesting decision was no longer ours to make because we were members of a co-operative, then returns to us might have been lower. In my opinion, the case for a co-operative rests on it being able to extract significantly better returns from the market over the long run because it should be able to offer end users certainty of supply.

Would we do it again? U betcha! There were times when things looked pretty black, for example, after that long drive up from Wellington we discovered that cattle had been ring barking the young trees. Even so, for most of the time, forest growing was trouble free. The trees just kept on going.

We had the feeling that we were working with nature, sailing with the wind behind us, so to speak. There were unexpected losses but also some unexpected successes. Making and drinking our own plum wine, discovering those marvellous central Hawkes Bay night skies and lazy summer afternoons down by the river as well as making new friends. The 540 km round trip drive up from Wellington was always worth the effort.

With climate change and predictions of increased drought frequency on the East Coast, if the main aim is maximum returns from a radiata pine investment, there might be better places to locate. For example, it might be possible to buy cheaper land with a higher and more reliable rainfall on the western side of the North Island. But financial return from logs was never the only motivation for us. Even if we do eventually sell-off some of the land, I do not think we will sell-up completely.

What species would we plant next − radiata or an alternative species? We have dabbled with eucalypts, cypress, acacias and indigenous with varying degrees of success. Our experience is that if you want to make taxable income from tree growing, and especially if you are a learner, radiata must be favoured because it is such a proven performer.

But our land values are now way above what is economic for radiata cropping due to the demand for rural residential blocks. Identifying house sites and then planting with species in a way that will enhance that river view must be priority. Amenity forestry tends to re-consideration of wide-spaced acacias, agro-forestry in other words.

What about carbon credits? At 18 hectares, we could have applied for the exemption, but much of the property is at risk from earth flow erosion and needs to be kept in forestry of one sort or another. Might as well take the money, we thought.