Development of a forestry block overlooking the Motueka Valley

We took possession of 45 hectares of land in July 2009. The property consists of approximately 22 hectares of pasture, 10 hectares of untended radiata pine which had been planted in the early 1990s, and around 13 hectares of gullies mostly covered in gorse, blackberry and bracken.

Four deep-sided gullies dissect the property. The grazeable areas consist of flat to rolling terraces rising to medium steep hills. Rainfall is approximately 1200 mm a year. Altitude begins at 140 metres and rises to 280 metres above sea level. Occasional strong winds are a concern with northerly breezes common. The soil is clay over granite with poor drainage during winter and very dry in summer. Fortunately there is plenty of good spring seepage.

The property is bounded by a gully at each of the north and south boundaries and bisected by a large central gully. On taking possession of the property we enthusiastically embarked on clearing scrub and planting natives along the banks of what would be our driveway, which passes down into and then up out of the central gully.

The purpose of the planting was somewhat for aesthetics but mainly for erosion control. With only one internal fence bisecting the property, stock control of the initial area planted would have been straightforward. In hindsight, however, having purchased an abundance of plants we should have been more selective and less enthusiastic about the further areas planted. Until permanent fencing is completed around the plantings, moving temporary electric fencing for stock control is taking an inordinate amount of time. 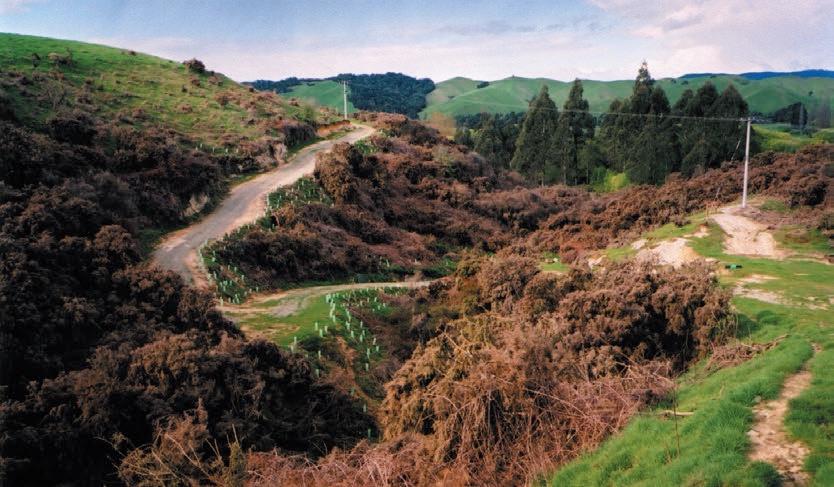 In May 2010 an extraordinary amount of rain fell in 24 hours resulting in flooding and four slips. The streams, previously inaccessible, were cleared of scrub up to two metres above normal level. We very quickly realised that planting solely natives for erosion control along our driveway was not entirely practical. Since then we have planted kawa poplar along the stream banks, as well as in the seepage areas, and interspersed cabbage trees amongst the native plantings.

On two other slips that appeared at the southern end of the property we planted toe-toe Cortaderia toetoe and along the edges another poplar Populus trichocarpa and Acer saccharum. Weed control consisted of release spraying with glyphosate. However spraying took place when soil moisture levels were still high and we suspect that the herbicide flowed through the soil pores to the roots, because many of the toe-toe planted round the edges of the slips died. The dead plants have since been replaced with a combination of koromiko and cabbage trees.

We have also found that release spraying kills the grass round the individual plants but the weeds that revegetate the areas, such as barley grass and thistles are far worse. So we have been placing thick layers of paper round each plant. It is more labour intensive and if planting gets too far ahead it becomes a big job, but at least there is now no stack of newspapers accumulating in the shed.

During the flooding a wide bottomed gully bounding our southern boundary and previously inaccessible due to dense scrub was cleared of vegetation by the flood waters. The Tasman District Council drove in some 700 poplar poles, in angled rows, along the floor of the gully to act as erosion control and to catch large debris in order to protect houses downstream. We lightly pruned all poplars, to encourage single leaders.

To prune or not

Being inexperienced in forestry, several months after taking possession of the property we asked a consultant to look through two of our three stands of radiata. He considered that about a third of the largest stand, approximately nine hectares, would need to be thinned. As we are 10 to 12 years away from harvest he considered the cost would be uneconomical and there would be major risk of wind throw.

It was decided that we would leave this stand and a smaller stand, in a much similar state, as it is. The second stand he looked at he considered to have promise. However we would need to prune to 4.8 metres within the next six months. About half of the stand has now been pruned to 4.8 metres. Pruning previously untended trees is an incentive to stay on top of the silviculture in future plantings.

The idea for the coming years is to plant coastal redwood, the eucalypts Eucalyptus fastigata, E. macrorhyncha along with blackwood in the gullies on the north facing slopes. On the south facing slopes we will plant Douglas fir. On various north-facing slopes there will be stands of Robinia pseudoacacia for ground durable posts.

The present stands of radiata, once harvested, will be replanted. For stock feed we have started planting poplars and willows. We will continue with a programme of planting low growing natives along the terrace front and western boundary so that our view over the Motueka Valley remains unhindered.