Forest and woodlot growers in New Zealand and Australia are beginning to experience a quiet revolution with the availability of supplies of highly improved clonal varieties of radiata pine. Cloning technologies for pines have been available for over 30 years but reliable and cost-efficient varietal development has only recently been perfected.

One of the main technologies has been the ability to store frozen pine tissue cryogenically and to maintain its juvenile growth habit for the necessary 8 to 10 year field testing period. Field testing is then carried out over the full range of forest sites and regions, and for a range of growth and yield, log and wood quality, as well as disease and other screening traits. Once the field screening results are in, the best few varieties are selected. They are then rapidly multiplied for woodlot and plantation growers, using a combination of tissue culture and amplification techniques.

Clonal varieties benefit forest growers when compared with commercial seedlots produced in both wind-pollinated and control-pollinated seed orchards. Production varieties are showing significant improvement in performance in field trials. The genetic gains from using selected clonal varieties can make a large contribution to the profitability of plantation and woodlot growing, as the accompanying charts illustrate.

Growth rate improvements in excess of 20 per cent will be obtained either with increases in timber yields at the end of the rotation, or in reductions of two to three years in rotation length. Equivalent improvements in corewood stiffness will ensure that a larger proportion of the timber will be fit for structural and other strength-requiring uses. Improvements of 30 to 60 kg per cubic metre in average basic wood density will provide timber with substantially increased strength and stiffness. It will also enable some forest owners to grow crops of structural timber on sites which were previously either too cold or too elevated to grow wood with adequate strength. In addition, increased improvements in Dothistroma resistance could substantially reduce control costs and result in increased growth in areas where the disease is a problem. 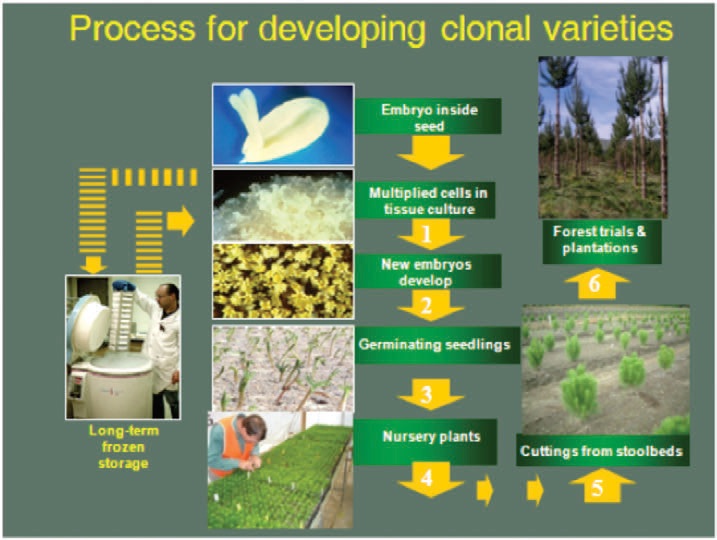 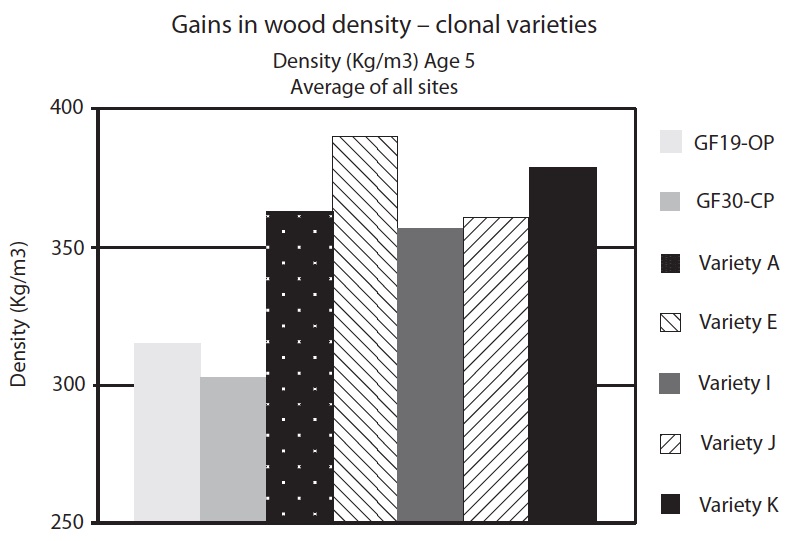 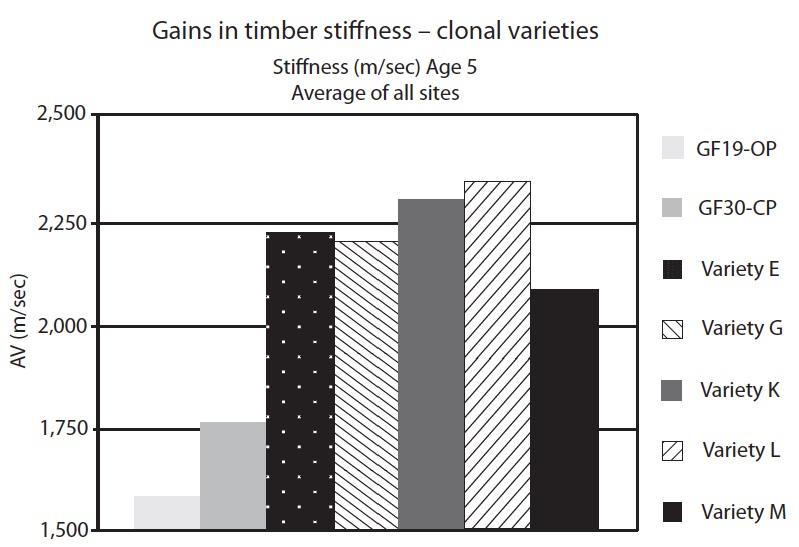 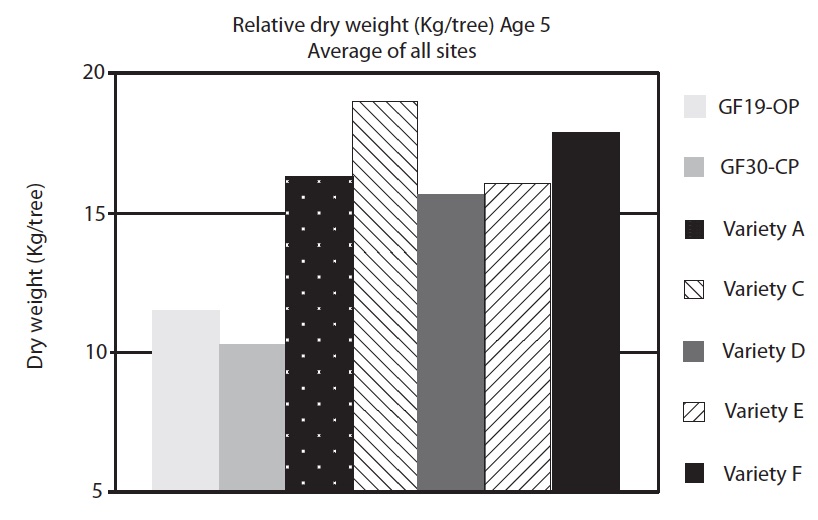 We are all aware of the current worldwide concerns about the negative effects of climate change. Combined with increasing recognition of the critical role that forests can play in mitigating these effects, the enhanced current availability of improved clones of radiata pine can only be beneficial for both New Zealand and Australian forestry.

In addition to the provision of timber, fibre and energy products, plantation forests provide a number of environmental benefits, including −

Forests established with improved clonal varieties can enhance all these benefits. They provide a unique opportunity to increase the rate of extraction of carbon dioxide from the atmosphere, increasing the amount of total carbon fixation. Forest growers can benefit from the increases in available carbon credits, giving improvements both in plantation profitability and cash flow.

These benefits are from the more effective selection process that the cloning system makes possible, rather than any feature of the cloning process itself. As each of the clonal varieties is a progeny of two excellent, field-tested breeding parents, the selected varieties are from an additional round of intensive field screening.

In addition, selection is made more effective as more can be inherited in clonal varieties compared with the more genetically variable seedling families. This implies that the same, substantial genetic gains in yield, log and wood quality will be available from the clonal varieties whether they are planted as forest stands of single varieties, or in mixtures.

Replication of the exact genotype showing better performance in field trials results in greater gains when selecting for multiple traits, as shown in the diagram. The combination of exceptionally high gains in the production varieties in field trials for growth, Dothistroma resistance and wood properties, would be hard to achieve using conventional tree stocks. This is especially true for the combination of high growth and high wood density.

As indicated above, clonal varieties can be grown as genetically uniform forest stands of single varieties. A number of researchers have identified the potential for additional benefits from the resulting increased uniformity and repeatability of tree and stand performance. These additional benefits can sometimes be hard to quantify. However they will undeniably play a role as growers and processors develop an understanding of the performance of specific clonal varieties on their forest sites.

There is an additional benefit from the higher predictability associated with using clonal varieties. Specific sets of varieties can be selected for their closer match to a grower’s particular objectives and site requirements − termed clone site matching − as a means of improving forest profitability.

For example, mixtures can be used to produce increased proportions of logs with clearwood formed between branch clusters. This is typical of closer spaced stands on medium fertility sites, sheltered from strong winds and potential damage caused by snow. Similarly, a mixture of varieties with high corewood stiffness and wood density will enable growers to extend the range of sites on which structural grades of timber can be produced. This will reducing their dependency on the other major alternative of pruned clearwood regimes.

Mixtures of varieties can also be used to reduce disease risks. This can be by combining varieties with resistance to known diseases such as Dothistroma, or by providing a genetic buffer comprising an unrelated mixture of varieties against diseases for which genetic resistance is not yet fully understood.

Genetic improvement from clonal varieties in Australasia has been built on the selection and breeding efforts carried out since the 1950s by Forest Research Institute. More recent research and development has been carried out under the auspices of the Radiata Pine Breeding Company. Early tree improvement work led to the establishment of open-pollinated clonal seed orchards or OP orchards. These comprise grafts of plus-trees selected in unimproved plantations of radiata pine, and culled based on testing of progeny in field trials.

The OP orchards have supplied forest growers with moderately improved seed and planting stocks since the early 1970s.The advent of control pollinated seed orchards, or CP orchards, in the mid-1980s led to further genetic improvement. This resulted in the crossing of two progeny- tested parent trees from the breeding population, in other words the resulting CP seed contains genetic gains from both parents.

The additional gains from clonal varieties are a result of the ability to screen CP progenies and select within crosses, and to do this more rapidly and efficiently, due to the higher heritabilities associated with cloning. Genetic gains from OP and CP orchard progenies have now been proved in large block trials that have completed a full plantation rotation of 30 years.

Improved growth, yield and log quality resulted at all six forest sites in this series of trials. The most substantial gains tended to occur on the higher growth sites in the central North Island, and the North Island east coast. When averaged across all six sites, the OP orchard seedlot achieved a 15 per cent gain in standing tree volume per hectare compared with the control seedlot, while the CP seedlot achieved a 35 per cent volume gain. At the Mohaka Forest site, mean annual increment from the OP orchard seedlot was 30 cubic metres per hectare each year compared with only 25 cubic metres for the relatively unimproved seedlot. For the CP seedlot, the mean annual increment was an outstanding 39 cubic metres per hectare a year.

Log quality improvements were also achieved. There was an improvement in higher log quality grades of seven per cent for the OP seedlot, and almost nine per cent for the CP seedlot. It is both interesting and important to note that the growth rate improvements achieved for the OP and CP seedlots in these trials would not have been predicted in the growth models current at the time, as these models were data from stands of relatively unimproved radiata pine.

Genetic gains in growth rate from improved clonal varieties in Forest Genetics trials already substantially exceed those from the earlier OP and CP seedlots, as shown in the graphs. In addition, some of the best improved varieties are also showing substantial gains in Dothistroma resistance, and in the important wood quality traits of corewood stiffness and average wood basic density.

Improvement in corewood stiffness will result in trees with an even higher proportion of wood meeting the accepted minimum specification for structural timber grades, of aroundor above, 8 GPa. Improvements in wood basic density will increase timber stiffness, and therefore yields of structural grades, in the tree outer wood, as well as contributing to improved timber strength, dimensional stability on drying, and fibre content. This in turn confers higher carbon and energy content.

Effects of genetic gains on profitability

Returns to forest growers from log sales represent only a small proportion − around 10 per cent in some studies − of the total intrinsic value of the resulting sawn timber and other wood products in their market use. Some integrated companies are able to gain a greater proportion of total revenue further along the forest value chain. However, the majority of forest and woodlot owners rely on the price received for logs sold at the stump. Investments in genetic improvement must therefore meet the same financial criteria as other investments in improved forest management. For many forest owners this will require a marginal return on investment of anywhere between 6 per cent and 12 per cent.

The combination of effective tree breeding and nursery plant propagation methods developed over many years has meant that the increased genetic gains from improved clonal varieties can normally meet the 12 per cent criterion of return on the additional costs of purchasing improved plant stocks. This can also be viewed in terms of an increase in the net present value on a per hectare basis, as is illustrated in the table.

In this example, an increased timber volume of 20 per cent at the end of rotation is combined with moderate increases in log and wood quality. It can provide an increase in net present value above $2,000 per hectare, for a total plant cost per hectare of around $750. This is approximately a 7:1 benefit to cost ratio for using improved radiata pine clonal varieties. It compares very well from both a risk and return perspective with investments of up to $3,000 a hectare in planting stock of alternative species.

Carbon credits priced at $15 a tonne can raise the net present value of radiata pine clearwood regimes on average sites from $1,215 a hectare to $3,378 a hectare at an eight per cent discount rate. In addition, the increased profitability for framing regimes was much greater, for a relatively small increase in associated market risk.

Growers looking for both increased cashflow and profitability from sales of carbon credits have a unique opportunity. They can combine the effects of selection for improved growth rate and wood basic density by clonal varieties, leading to greatly increased carbon content of the resulting forest stands. In conventional breeding it has proved difficult to improve growth rate and wood density simultaneously. However, Forest Genetics have been able to identify varieties that combine volume growth rate improvements with wood density improvements to substantially increase yields of sequestered carbon dioxide. These increases in carbon content, when translated into marginal increases in numbers of carbon credits, can lead to increased plantation profitability. They can also provide a welcome source of interim revenue for smaller growers.

In conclusion, the increased deployment of improved clonal varieties in both forest plantations and woodlots in New Zealand and Australia will lead to substantial and direct financial benefits to forest growers. It will also offer previously unavailable options for matching genetic improvement gains to economic and site benefits. For those wanting increases in carbon capture, clonal varieties are an opportunity to substantially increase the financial and environmental benefits.