Wairarapa land use and land cover

Wairarapa region is divided into three broad geographic zones – the western Tararua mountains and foothills, the central plains and lowlands and the eastern hill country.

The Tararua range, running south west to north east rises up to 1,700 metres above sea level and is underlain by greywacke and argillites with a thin strip of softer sedimentary rocks along its eastern flank. This area generally has a higher annual rainfall of 1,500 mm and can be in excess of 4,000 mm along the top of the range.

The central plains are dominated by glacial and alluvial accumulations of gravels and silts, raised terrace systems and some lower rolling hills. This area ranges from 1,200 mm annual rainfall along the west to the dry Gladstone-Martinborough climate belt averaging 600 mm to 700 mm.

The eastern hill country is highly variable in both terrain and geology. It ranges from alluvial river flats and terraces to softer tertiary mudstones and siltstones through to argillite, limestone and greywacke Taipos. While rainfall averages between 1,000 mm and 2,000 mm the climate can be highly variable with droughts and extreme storms both common with a resultant high erosion risk associated with the steeper and softer rock types.

Since the last Ice Age

Since the last glacial period 10,000 years ago the Wairarapa had consolidated to a strong podocarp and broadleaf dominated forest cover. The drier areas tended more towards totara and kanuka, the lower fertility and high altitude into beech, and the wetter central plains areas of kahikatea, pukatea and matai. 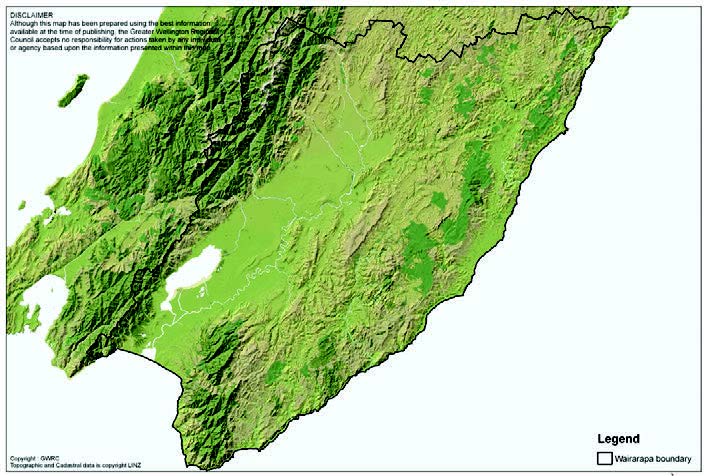 With the arrival of Maori around a thousand years ago food sources were initially harvested along the narrow coastal strips. However food production evolved into land clearance for vegetable growing and storage. This also saw the first use of fire as a vegetation clearing and hunting tool. With the arrival of the Europeans in the 1840s, some of the plains area was semi-cleared with open grasslands.

The first settlers extended up the coastal fringes from Wellington and into the lower Ruamahanga valley areas. To the north from Mauriceville to Dannevirke lay a section of heavy podocarp forest known as the 70 Mile Bush. This was originally cleared in the 1870s, starting at both ends, with many of the participants being settlers of Scandinavian descent.

The Wairarapa has had its share of land settlement and subdivisions from many different government policies and soldier settlements, with many land clearing assistance and subsidised development schemes. In more recent times the Livestock Incentive Scheme and Afforestation Grants have contributed to the land clearing and development.

The best Class I soils are located along the recent alluvial plains of major river systems. The most notable areas are the alluvial plains north and east of Greytown which support intensive market gardening, orchards and berry fruit production.

Dairying has traditionally been aligned in the higher rainfall areas against the Tararua foothills, but more recently large irrigation schemes have supported intensive dairying in the lower rainfall areas. In addition large areas of gravel plains are used for silage and hay as feed for dairy cows or used for wintering purposes to relieve milking platforms in the wetter winter months.

The drier central plains, often with loess based soils, are used for cash and forage cropping, tending to have a more reliable harvesting and ripening climate. The main crops are peas, barley and wheat with the annual cropping accounting for two per cent of the land. These areas also tend to be finishing and fattening properties. Older raised terraces in this climate belt have been specifically sought after for vineyard development. The original plantings started in Martinborough in the 1980s, but more recently have extended up through Gladstone to north of Masterton. The current area in grape production is approximately 800 hectares, the region accounting for four per cent of New Zealand’s total wine production. Olive trees now cover 200 hectares to produce 15 per cent of New Zealand’s olive oil.

The beginnings of forestry

Forestry made a start in the 1940s and 1950s with the establishment of Ngaumu Forest by the Forest Service. This forest now extends to over 11,000 hectares. The current cutting rights are owned by Juken NZ Ltd, which also has a processing mill for ply and LVL just south of Masterton. Other forest companies such as Forest Enterprises and PF Olsen operate and manage forests with many syndicated and private forests throughout the region.

Forest Enterprises which began in 1972 in Masterton has 40 of its 73 forests in the Wairarapa covering 9,612 hectares, the oldest of which are currently being harvested. Exotic forestry now accounts for nearly 10 per cent of the total land area with many forests developed on to the more marginal grazing and erodable hill country. Ngaumu Forest pioneered the intensive silviculture of radiata, being the earliest to bring pruned log volumes to the market.

Along with the rest of New Zealand, lifestyle units in rural areas are a notable feature, with major clusters situated around the main towns. These typically have a wide variety of land uses. The eastern hill country is the domain of sheep and beef breeding, many of these properties adopting some resilience by a mix of stock types, fattening, trading and cropping to improve economic returns. The more marginal areas have been converted to forestry or are reverting to native cover. Grazing pasture land still accounts for 58 per cent of the total land area.

Large tracts of land are Department of Conservation land, these being the Rimutaka and Tararua Forest Parks along the western border and Aorangi forest park in the southern Wairarapa. There are other bush reserves and the most notable is the Pukaha bird reserve at Mount Bruce.

There has been high activity in bush protection readily supported by the QE II National Trust and Greater Wellington, private landowners and the Trimble Foundation. There are now 153 registered covenants established covering 4,500 hectares. Total land area as protected or non-stocked native vegetation cover is currently assessed at 171,400 hectares, or 28 per cent of the total land area.

Historically the Wairarapa has been an endemic Tb area with vector eradication carried out by the Animal Health Board and Greater Wellington Regional Council. This regionally coordinated programme has reduced reactor cattle herds from 307 in 1994 to five currently. Similarly, farmed deer herd reactors were 24 and deer farms are now clear.

In tandem with this, the Department of Conservation has treated the conservation estate with the resultant reduction of possum and other animal pests seeing a huge improvement in native bush regeneration and increasing native bird populations. Bird breeding programmes at Pukaha on the northern border of our region have begun to release kaka, kiwi and kokako back into open bush areas. 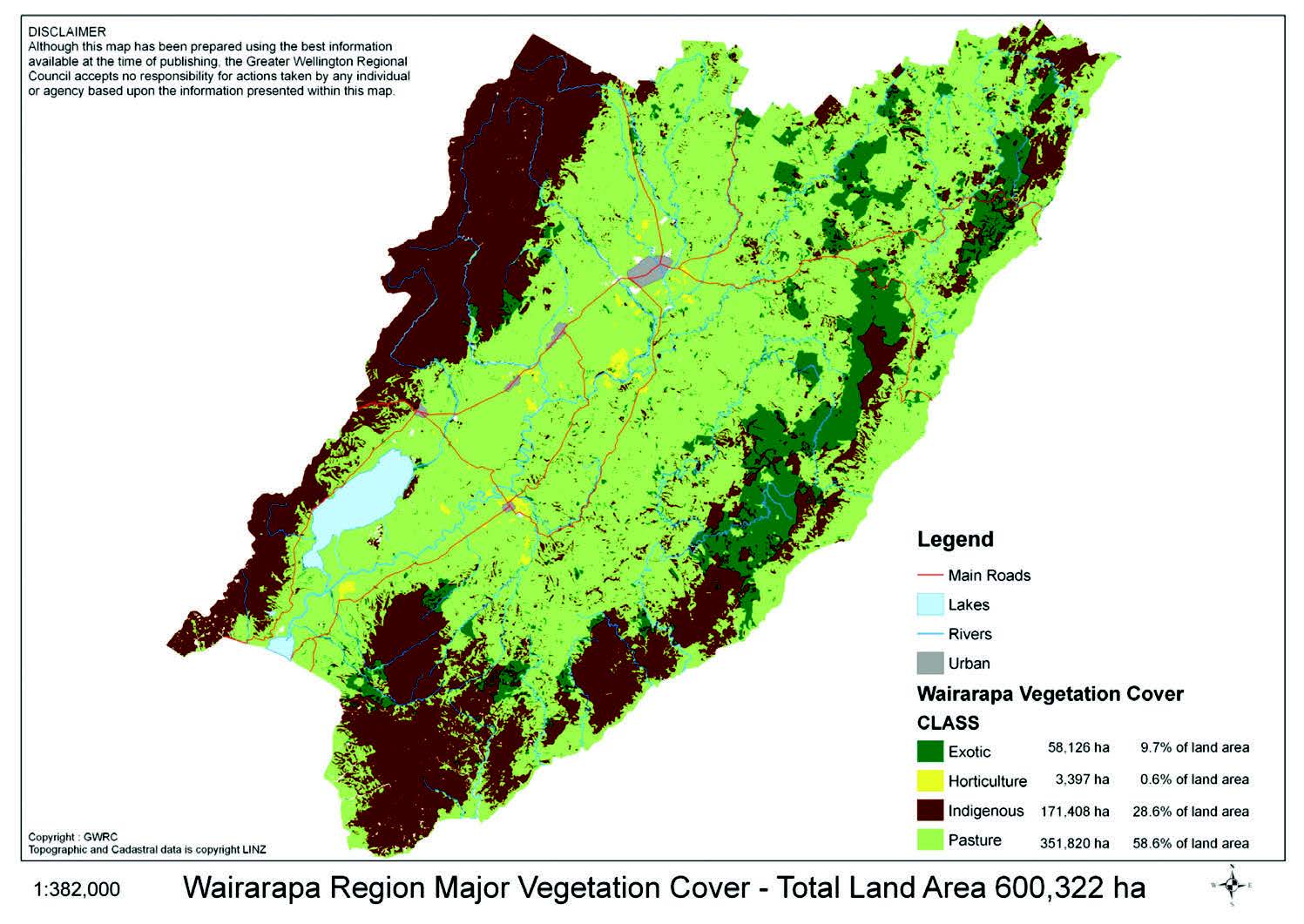