You are here: New Zealand Tree Grower » February 2009 ›  Fire weather: The science behind the signs

Fire weather: The science behind the signs

At this time of the year people often take more notice of the fire danger signs that appear along New Zealand’s rural highways. These half-grapefruit dials indicating low, moderate or high fire danger appear relatively simple. But the ratings are determined by complex science aimed at effectively managing the fire risk associated with different weather conditions.

The link between weather and fire risk has been the focus of much research in recent years. A key element of this research has been the development of a fire climatology database that collates data from weather stations throughout the country. These daily readings give a picture of New Zealand’s fire climate ? in other words, the average weather based on past history.

This database has provided the basis for a range of studies, including –

The New Zealand Fire Danger Rating System (NZFDRS) has been developed to help support fire management decision-making. Examples include setting burn restrictions, issuing fire permits and notifying the public of prevailing fire danger. The NZFDRS analyses the weather, vegetation and topography that affect ease of ignition, rate of fire spread and intensity. The system is based on the Canadian Forest Fire Danger Rating System that was introduced in New Zealand in 1980. 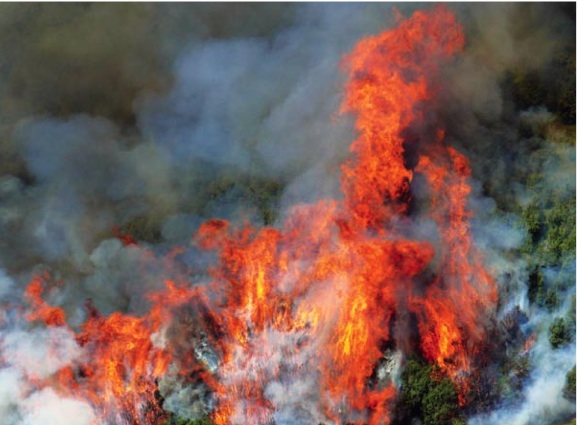 At the core of the NZFDRS is the fire weather index system. This provides ratings of relative ignition potential and fire behaviour based on the information collected daily by the weather station network. These values are used to calculate fuel moisture codes and fire behaviour indices. From these calculations come the ratings that appear on the fire danger signs.

The fire danger classes are generally simplified into low, moderate, high, very high and extreme ratings, which vary depending on the dominant vegetation types in an area. These ratings provide an indication of the increasing difficulty of fire suppression as fire intensity increases. The very high and extreme fire danger classes represent the conditions under which it will be difficult, if not impossible, to control fires with conventional fire fighting techniques.

Fire risk varies considerably for different parts of New Zealand due to the wide range of prevailing weather conditions. In general, the eastern and northern parts of both islands tend to have the most severe fire climates, as they are most prone to foehn wind and drought conditions. Unlike many other parts of the world where there are more stable continental climates, problem fire weather can also occur at almost any time of the year.

To improve knowledge on the fire climate of New Zealand, Scion recently completed an analysis of the long term average and extreme values of weather and fire weather index system components for 127 station locations. Stations in the Marlborough and Canterbury regions demonstrated the highest values of the three fire climate severity measures. At the other end of the scale, the West Coast, Taranaki and Waikato regions had the least severe fire climates.

For individual station locations, three stations in Marlborough – Awatere Valley, Woodbourne Aero and Molesworth – had the most severe fire climates. Christchurch Aero in Canterbury and Castle Point in Wairarapa were the other two stations in the top five. The seven stations with the least severe fire climates included Opouteke in Northland, Marco in Taranaki, Athol in the Waikato, Waimarino Forest in Wanganui/Manawatu, and all three stations – Westport, Hokitika Aero and Haast – from the South Island’s West Coast.

The highest ranked stations had more than 40 days each year on average of very high and extreme forest fire danger, and the lowest less than one day a year. As you would expect, the stations with the lowest risk are generally characterised by the highest annual rainfalls.

A growing body of international evidence, recently summarised by the international Intergovernmental Panel on Climate Change (IPCC), suggests that future fire activity is expected to increase as a result of global warming and associated climate change. Scion did a study to determine the likely changes in fire danger under different possibilities of climate change for New Zealand.

Results indicate that New Zealand is likely to experience more severe fire weather and fire danger, especially in the Bay of Plenty, east of both islands and the central Wellington and Nelson regions. In several cases such as Gisborne, Napier and Christchurch, the average seasonal severity ratings increased by more than 25 per cent to 65 per cent, and the number of days of very high to extreme forest fire danger increased by more than 20 days a year by 2080.

This study will help New Zealand rural fire authorities to manage and prepare for fire risk now and in the future.