Since the Lincoln University agroforestry experiment was established in 1990, over 30 scientific papers have been published. However, as most of these have been in overseas journals where they are not readily available to farm foresters in this country, we would like to present some important highlights. Some of the results confirm findings from Tikiteri and other work in Australasia but other findings give new insights. They may offer opportunities for enhancing farm forestry management.

The Lincoln University agroforestry experiment differs from other radiata pine silvopastoral investigations in that we studied how different pastures performed and interacted with radiata pine tree growth at a constant final crop stocking of 200 stems per hectare. We also compared several clones of radiata pine with seedlings. Our research was on fertile arable soil on the Canterbury plains where rainfall averages 660 mm a year and summer droughts are common. No fertilisers or irrigation were applied.

Reasonable pasture productivity under the radiata pine, of about half that of the open ground, was obtained for 12 to 13 years with a pruned sawlog regime. This was similar to other research, such as at Tikiteri near Rotorua. Dense crowns of radiata pine shaded out all pasture types after mid-rotation. Therefore at 16 years the pastures under the trees were receiving only 15 per cent to 18 per cent of the light in the open while pine needle litter covered between 56 per cent and 98 per cent of the ground. Clover, which was abundant in the first three years, was almost gone after 10 years.

Pasture productivity was about 10 per cent lower than the open during the first six years with the greatest reduction being with lucerne and the least with clover. However, most of the difference was due to the metre wide sprayed strip along the tree lines which occupied a seventh of the area. As early as age three years, we found pasture productivity close to the trees was being affected by the trees. By 10 to 11 years, as the trees began to close canopy and light intensity was about 50 per cent to 60 per cent of the open, the productivity of cocksfoot and clover and the new lucerne sown in 1999 had decreased to about 65 per cent of the open. The 10-year-old lucerne, sown when the trial was established, had about half the productivity of the new lucerne at this time. However, that was expected given the normal life of lucerne pasture in the district is seven years.

Lamb and ewe-hogget liveweight gains reflected the drop in pasture productivity. From years three to six there was about a 20 per cent reduction compared to the open and by age 10-11 years this had dropped to about half the open. Pasture under the trees was marginally more nutritious but this was offset by the drop in pasture bulk density due to etiolation of the plants in the shade and reduced grass tiller and lucerne stem numbers. It was thought that the reduced pasture density reduced animal bite size and the daily animal feed intake. Therefore, although stocking rates of sheep were based on dry matter production, liveweight gains were less than half under tree shade compared to the open pastures. 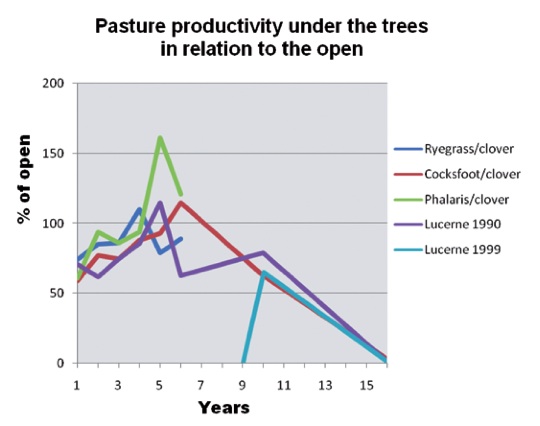 Cocksfoot was found to be more shade tolerant than lucerne. However, in spite of its lower shade tolerance, lucerne had greater productivity than cocksfoot and clover both in the open and under the trees. Lucerne was always more nutritious than cocksfoot, particularly in the latter years as the clover disappeared from the cocksfoot pasture. Studies made between ages 9 and 11 years showed that the cocksfoot was extremely nitrogen deficient and responded well to fertiliser. The lucerne sown at age 9 years grew well under the trees, producing almost 10 tonnes per hectare of dry matter at age 10 and 11 years.

The results suggest that farm foresters should consider lucerne for agroforestry blocks, despite it being less shade tolerant. It is high producing and nutritious. It would be particularly valuable where additional feed is required in spring and summer, but would not be useful over winter as it is dormant during that time. It is also drought tolerant.

However, lucerne must be rotationally grazed or it rapidly becomes weedy and declines in productivity. Grazing durations of  seven to 10 days with a six week spell are recommended. As it is best to avoid grazing from the end of June to September, it is not ideally suited for use in stock havens. Lucerne is also well suited for making hay and silage and could be mechanically harvested in young pine stands that are vulnerable to animal damage.

Cocksfoot, on the other hand, has a place for stock havens as there would be feed available from it in winter. If the stock haven was to be used during lambing or after pre-lamb shearing, its productivity and nutritive value could be increased by judicious use of  fertilisers.

In the Lincoln experiment we were able to compare the competitive effects of various pastures on radiata pine growth as we had a control treatment that had no understorey. The competitive effects on tree growth were most marked in the early years until the tree roots were able to fully exploit the soil. Later in the study the competition decreased, as the trees were dominating the site and pasture productivity was dropping. Between age 11 and 16 years the mean annual increments in height, diameter and volume were the same for all treatments.

This competition loss translates to about two years of growth or up to 8 per cent volume reduction at the end of the rotation. Another way to look at this is to say that it would be necessary to increase the rotation by two years to get the same wood volume to harvest. However, there were also changes in tree quality that may partly offset this productivity loss.

The competition between pastures was largely for moisture but also for nitrogen. The nitrogen competition was surprisingly severe with lucerne when it was being forage harvested, despite this species being a nitrogen fixing legume. In the third growing season, lucerne fixed 230 kg nitrogen per hectare but forage harvesting removed 342 kg nitrogen per hectare leading to a deficit of 122 kg nitrogen per hectare. The nitrogen levels in the tree foliage at two years dropped from 1.77 per cent in the bare-ground plots down to 1.42 per cent  in the lucerne treatment and the trees were distinctly yellow in colour. The pastures containing clover followed similar trends but the effects were not as severe. However once grazing was begun in the fourth growing season the nitrogen stress disappeared, particularly in the lucerne treatment, although the cocksfoot/clover and ryegrass alone treatments had marginal nitrogen levels in the pine foliage at six years.

If strong competing pastures such as lucerne are being used in agroforestry it is important to ensure that the immediate area close to young trees is kept free of them. We used a metre wide strip. This was sufficient to ensure good tree survivals, despite studies showing that both lucerne and phalaris roots invaded the sprayed strip more than cocksfoot. Lucerne was also shown to use the soil moisture more quickly in the spring than ryegrass/clover and to extract soil moisture to a greater depth. These moisture effects became less marked after four years as the tree roots more fully exploited the soil.

On fertile soils, for example when planting on arable soils or areas with improved pastures, tree form may be compromised compared to typical plantation sites. This experiment showed that it is possible to control tree form by choosing a suitable competitive understorey pasture.

Trees grown with pastures were more cylindrical and had less taper than trees where there was no understorey competition.  At eight years the difference in average taper was about 20 per cent reducing to under 10 per cent by 16 years. These differences translated into a 15 per cent to 21 per cent reduction in maximum diameter over stubs. Furthermore, trees grown with competition had less butt sweep, wobbles, kinks, a smaller branch index in the second log, and fewer multiple leaders. In general, trees grown with lucerne had the best form. In part, the improved form of the butt log was related to the lower degree of toppling that occurred soon after establishment.

Experimental overview
Five contrasting pastures were compared with a tree only treatment and with the same pastures grown in the open.
Main treatments –

The clovers used were a mixture of Pawera red clover, Huia white clover and Woogenullup subterranean clover. Pastures were cut for silage during the first three growing seasons, partly to reduce damage to trees, and subsequently rotationally grazed.

Within each plot were four tissue-cultured clones (GF 15 to 17) and a seedling line (GF 14) of radiata pine. Trees were planted at 1000 stems per hectare and thinned down to 200 stems per hectare by age seven years. Pruning to six metres was done in four lifts.

The results at 11 years suggested that tree growth was markedly affected by the choice of tree type used. One tissue-cultured clone stood out as being faster growing, although this was closely followed by a second clone and the seedlings. However, by 16 years there was no difference between the seedlings and three of the clones.

The different tree types also influenced the degree of malformation and log quality. The seedlings, in particular, were more malformed than the physiologically aged tissue cultured clones, with two clones in particular standing out as better than the rest. Tree type also influenced toppling with one clone showing almost no toppling at two years, while 65 per cent of the seedlings had toppled to greater than 15o. Differences in tree stability were related to rooting habits including higher root to shoot ratios. Obviously, if it is possible to choose tree stocks that will be stable in the early years this would be a distinct advantage.

The establishment of radiata pine with pasture understoreys on former arable land led to changes in the soils. In particular, soil organic matter and soil organic phosphate increased. This is in contrast to where trees were planted on already high producing pastures such as at Tikiteri, where soil organic matter decreased. The trees with understorey pastures often showed significantly higher phosphate levels in their foliage than the trees without an understorey and vector analysis showed this was due to improved uptake of phosphate. Agroforestry also led to a reduction in exchangeable potassium, and sometimes reduced potassium in the foliage of the trees, but not to levels which would influence tree growth.

The results from the Lincoln agroforestry experiment show

Don Mead lives at Milnthorpe in Golden Bay and Dick Lucas can be contacted at PO Box 84, Lincoln University.