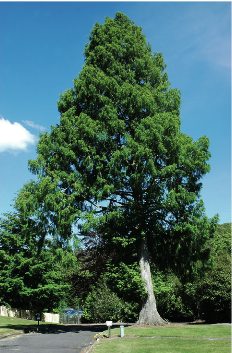 The dawn redwood, Metasequoia glyptostroboides, occurs naturally in China. It is only known in the wild or semi-wild state in one small valley in Hupeh Province, near the border of Szechaun where it occurs mainly in a strip along the main river, over an area only 1.5 km wide and 25 km long. It grows best in moist shady localities in ravines and on stream banks and reaches 50 metres tall and 3.3 metres diameter. Along with the larches, and swamp cypress it is one of the few deciduous conifers. It belongs, together with all the other redwoods, to the family Cupressaceae and is the only living member of the genus Metasequoia. In recent classifications the family Taxodiaceae including the genus Metasequoi has been placed within the family Cupressaceae.

Like the Wollemi pine, Wollemia nobilis, the dawn redwood has been described as linked with the dinosaurs and a living fossil. It was first known only as fossils from the late Cretaceous period, 136 million years ago, found in Japan and Korea in 1941. Then in 1944 herbarium specimens were collected from living trees in China but could not be identified. It was a year later, when the specimen was sent to an institute of biology in Beijing, that it was recognised as the same species as the fossils. In 1948 the species was formally described and named as Metasequoia glyptostroboides. News of its discovery caused a sensation within the botanical community around the world and more than three hundred research papers have been published on this species, in which there is still considerable interest see www.metasequoia.org.

In contrast to the very commercial release of the Wollemi pine, seed of the dawn redwood was freely and widely distributed around the world soon after the species was formally named. A number of trees in New Zealand were established from seed sent from Dehra Dun in May 1949. It is assumed that the trees now in the grounds of Scion were established from this seed.