Cypress species have been grown in New Zealand for many years as a substitute for native timbers. The development of portable sawmills has increased the production of lumber for a range of high value applications. Ensis recently completed a study to compare the wood quality characteristics of common cypress species to gauge their performance in use.

It has been suggested that cypresses, grown on relatively short rotations of 20 to 25 years, could produce well formed logs containing high proportions of naturally durable timber with favourable properties and appearance. This study set out to test these assertions by determining the appearance and structural quality of lumber from young pruned trees of three cypress species or hybrids. The trees were harvested at age 21 years, which is considered to be around half the normal rotation age. 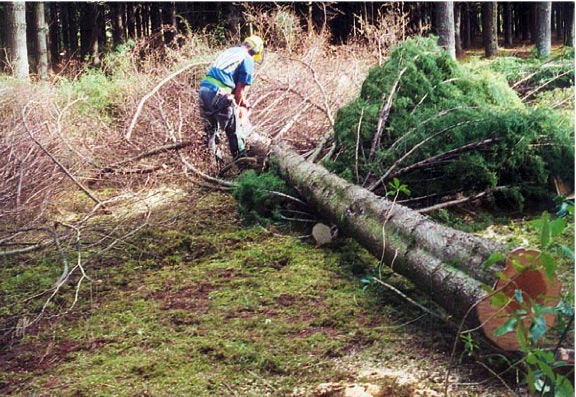 Lusitanica is not as well known in New Zealand as macrocarpa, but is now being planted more widely, as it is less susceptible to cypress canker. It has a reputation for greater stability on drying than macrocarpa and while not as strong, in other respects is considered very similar.

Several clones of Leyland cypress, an inter-generic hybrid between yellow cedar and macrocarpa, have been deployed widely by vegetative propagation. It is a healthy and well formed cypress and has been widely planted in shelterbelts, but infrequently in plantations.

The properties of New Zealand grown Leyland cypress timber are available from Ensis.

Use of macrocarpa and lusitanica has been investigated at Forest Research since the 1960s. The earlier studies had shown that kiln dried macrocarpa timber from shelterbelts suffered extensive internal checking. Air drying on its own, or in combination with kiln drying, also resulted in surface and end checking. In contrast, lusitanica was successfully dried without internal checking or collapse using a low temperature kiln schedule. However, checks developed within and around inter-grown knots in this species, and both kiln and air dried boards showed end checking. In some of the later studies, timber distortion was also encountered.

The most recent study used 21-year-old trees, all grown in the Rotorua area. All species were planted at 1,111 stems per hectare and later pruned in stages to a height of five to eight metres and thinned to 550 stems per hectare. Each had some advantages and disadvantages in growth, form and sawn timber characteristics. Macrocarpa had grown to the same diameter at breast height as lusitanica, and both had grown much faster than Leyland. Macrocarpa was the tallest but suffered badly from canker. Leyland had straighter stems than the others and a higher frequency of branching.

Sawn timber recovery was 50% to 60% for all log height classes of each species, except around 40% for the butt logs of macrocarpa, owing to fluting and high taper. Leyland showed the best results for appearance grades, followed by lusitanica and then macrocarpa. Leyland yielded 46% dressing, 35% merchantable and only 19% box. Lusitanica averaged 26% box, while macrocarpa had 46% box.

Causes of appearance degrade varied among species. The worst defect for lusitanica was checks within knots. For macrocarpa, surface checking was the biggest problem, and pruned branch stub holes in Leyland, at least in this study of young trees. Warp on drying and lower stiffness are serious disadvantages of lusitanica.

There was a lot of variation between trees in checking in each species. Knot checks were an important defect in all species, which may have technological solutions in the dressing process. In Leyland the most common defects were pruned branch stub holes caused by lack of intergrowth around dead branch wood. Possibly pruning practice changes could help here.

Looking at structural properties, long span bending tests showed that lusitanica boards were much less stiff than the Leyland hybrids and macrocarpa, and were all less stiff than radiata pine. Stiffness increases substantially from the inner boards to the outer in lusitanica and increased age will undoubtedly result in lusitanica and the other species improving their stiffness relative to global radiata pine values.

Bending strength from the sample of boards broken in the Baldwin testing machine was similar to that of radiata pine global values for macrocarpa and Leyland, but lusitanica was much less strong.

The good performance of the appearance and structural products of the four Leyland hybrid clones may be a pointer towards the development of faster grown hybrids involving southern Oregon provenances of Ch. nootkatensis. The ovensii hybrid clone is reputed to grow fast and be resistant to canker.