A personal view of Leyland cypress

My interest in Leyland cypress goes back to 1980, when my brother Richard and I bought 400 Leighton Green cuttings from Joll Hosking in Whangarei. 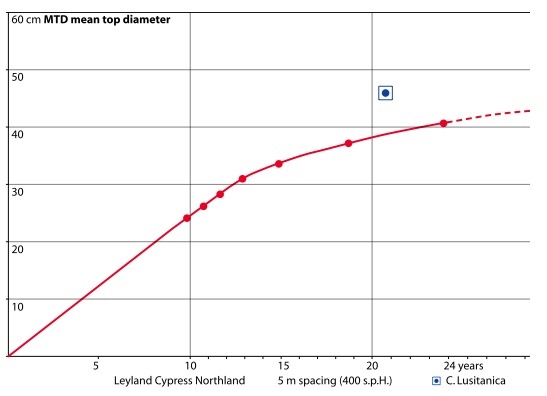 We planted them on our property in the Far North. During the previous decade there had been growing interest in planting Leylands for shelter, and several shelterbelt trials were established. In contrast we planted most of our trees as a woodlot.

The site has moderate fertility, is protected from the prevailing wind, and grows big pines and eucalypts.

We used two different spacings – 400 per hectare and 200 per hectare. We inter-planted with pines, which we felled at age six. We pruned the Leylands annually, to about four metres, and from age 10 kept records of diameter growth.

In view of recent interest in the hybrid cypresses, and in particular their potential as a source of valuable timber, this seems a good time to review our experience. What follows is a personal spin on Leylands, based on observations of the Northland plantings, and on subsequent plantings in the Waikato.

What diameter can we expect?

The graph above shows the mean top diameter in our trees planted at 400 per hectare, based on seven measurements from age 10 to 24. This shows that initial growth was rapid, but diameter growth is currently much slower.

What diameter can we eventually expect? The trajectory on the graph suggests to me that we may be lucky to reach more than 50 cm. To test this I recently checked out some older Leylands. Our property in the Waikato shares a common boundary with what was formerly the Rukuhia Soil Research Centre. This contains many trees planted some years ago by Pat Bates, a horticultural research scientist who was involved in early Leyland cypress introductions to New Zealand. In a shelterbelt row of Leighton Greens planted close to 40 years ago on a good site, the average diameter is 48 cm. My guess therefore is that the best we can expect within a realistic rotation is about 50 cm.

Does this really matter? For some reason we tend to be hooked on to a target diameter of 60 cm., but a smaller pruned log should be very marketable. We know that the timber is of excellent quality, a little paler but otherwise comparable to macrocarpa, and with little sapwood.

However as the graph shows, in growth rate they do not match lusitanica, which in addition are much easier to prune, and are likely to deliver useful timber from the unpruned top segment.
The Northland trees showed very uniform diameter, with little difference between the average and mean top diameter. In contrast, an adjacent woodlot of blackwoods showed a much greater diameter range, a slightly greater average diameter, and much greater mean top diameter. 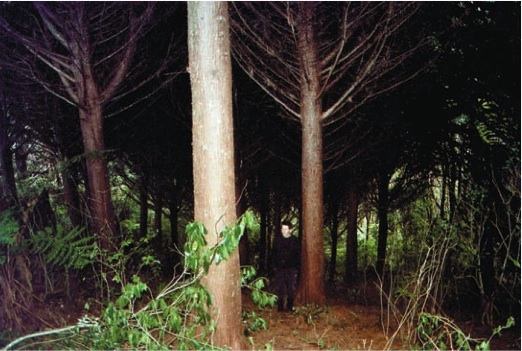 No less than 400 per hectare

We found virtually no difference in mean top diameter between the trees at 400 per hectare metre and those at 200 per hectare by age 24. I suspect that in response to branch mortality in the lower crown at closer spacing, some divergence may develop over the next 15 years, but it is likely to be slight. There seems to be no point therefore in planting Leylands at less than 400 stems per hectare.

This is a little surprising when you examine the trees in the two groups. At wider spacing the trees have more foliage, and in response to this I am sure a cross section of the tree above the pruned segment would show more wood. However much of this is laid down in the branches rather than in the main stem, and is therefore of no value.

The most notable, and troublesome features of Leighton Green are the large branches. In the lower crown these can reach massive size. The largest and ugliest of the Leylands at Rukuhia is adjacent to my boundary, and four branches that extend 10 metres across the fence range from 28 cm to 43 cm in diameter. Clearly they need aggressive and regular pruning, preferably once a year. Fortunately this appears to have little effect on diameter growth.

At Pirongia I have adjacent woodlots of Leylands and Ovensii. At the same age the Ovensii are taller and thinner. When pruning they show marked differences –

A method I have used to reduce the pruning load in the following year is to shorten, or shear the lower branches at the base of the crown after pruning. This can be done quickly with a long-handled chain saw. Ian Barton has shown that to be effective, more than half of the branch must be removed, and the effect lasts for just one year, after which they resume normal growth. 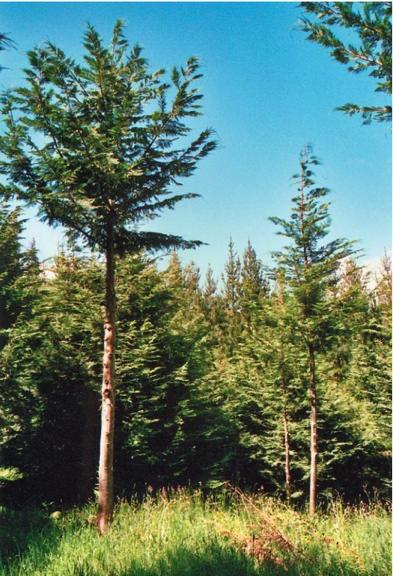 Sought after in the marketplace

We have reason to be confident that the pruned stem will be sought after in the marketplace. What can we expect of the unpruned top segment? Here I have some reservations.

When we looked at our woodlot at age 16 we found no visible differences between the crowns at the two different spacings. However in those trees at five metre spacing – 400 per hectare – the canopy had closed by 24 years, and the lower branches in the crowns had died. To date this has had no effect on diameter growth, but it may do so over the next 15 years. At seven metre spacing – 200 per hectare – the lower branches are alive, and I think they will remain so.

There is no doubt that a pruned log with a small defect core will be valuable, that an unpruned log with live knots will be usable, but an unpruned log with dead knots may be worthless. It is too late to try to salvage part of the crown at this stage by pruning off the dead branches – they are too big, close packed and hard to get at. It makes sense therefore to get maximum value from the pruned butt, taking it to six metres, or more if you enjoy self punishment.

If the lower branches remain alive in trees at seven metre spacing, will that provide a usable top log? I have doubts. My guess is that at wide spacing any timber value will still be mainly confined to the pruned stem. This contrasts with lusitanica, where the crowns are much taller, the branches smaller and viable, and with little taper in the stem.

Mixed planting has benefits and drawbacks

In Northland we inter-planted the Leylands with radiata pine. The reasons were to cover our options in the event of failure, to give some wind protection and to reduce branch size. This may have been helpful for a brief period, between years four and six at which time we felled the pines. The benefits of mixed planting were therefore limited, but the drawbacks were significant. As the Leylands have short crowns the pines overwhelmed them at year six and had to be felled. This resulted in some damage to the remaining trees, exposed the unprotected trees which were by now stress-shielded to wind damage over the next year, and left a pile of slash which made access for pruning very difficult over the next two years. A better option would have been to ring-bark the pines at year five, and fell them two years later.

From our experience I would not recommend mixed planting with Leylands. It can work with lusitanica, but even then it needs careful attention.

Suitable as a shelterbelt

Much of the usefulness of Leylands is that they will grow on adverse sites, tolerating exposure and dry conditions. This makes them suitable as a shelterbelt species. However when grown for pruned timber I think they need careful site selection.

In my shelterbelts, survival has been good across a range of conditions. However on sites where they were exposed to constant wind and drier soils they showed a lean, and at year 10 the diameter was reduced by 25% compared with trees in a more sheltered location.

Cypresses are notoriously promiscuous, and the offspring show much genetic variation, often bearing little resemblance to their parents. It is curious therefore and perhaps a reflection on funding for forest research, that in 2004 we are planting hybrids that appeared by chance in an English park back in the nineteenth century. There is a growing view, which I share, that the great potential for cypresses will lie in capturing their genetic diversity and capacity for hybridisation, and some promising work is currently under way.

I am not convinced that Leighton Green is the answer. The wood is good, and the growth rate acceptable, but the branches are a real problem. Any viable alternatives would need to have better branch architecture, and at least comparable growth rate, canker resistance and proven wood quality. A small number of Leyland hybrids have been trialled in New Zealand, and it seems that the jury is still out on their performance. I have no doubt that other and better ones will emerge from current research.