Gordon and Trish Levet are sheep farmers and they are good sheep farmers. Gordon, now in his mid eighties, has managed the family farm Kikitangeo near Wellsford since 1961. But he has not just managed, he has managed sustainably with thought for the future. Gordon is a forward thinker, someone always wanting to do things better and with consideration for the environment and soil conservation.

Gordon and Trish Levet are sheep farmers and they are good sheep farmers. Gordon, now in his mid eighties, has managed the family farm Kikitangeo near Wellsford since 1961. But he has not just managed, he has managed sustainably with thought for the future. Gordon is a forward thinker, someone always wanting to do things better and with consideration for the environment and soil conservation.

His first passion is sheep and breeding good Romneys. His efforts over more than three decades have been in breeding worm resistance using scientific methods, with success which has earned him an enviable reputation as a breeder.

Tree growing and diversification of income began before Gordon took over the farm. His father, grandfather and great grandfather before him ran a successful vineyard and had planted radiata pine and macrocarpa. Remnants of the original macrocarpa plantings survive today and these are superb trees. Gordon still mills and sells timber from these trees for additional farm income, and has continued the family tradition of planting trees, currently with 60 hectares of plantations.

Having been NZFFA members since its formation, Gordon started planting trees over 60 years ago and the mature plantings on the property show his vision for aesthetic beauty. My visit was timely for the display of colours from liquidamber, dawn redwood and other colourful autumn foliage trees.

He is very passionate about poplar. Poplar has been planted extensively around the farm, mainly to protect water courses and to lower water tables. Tomos are nowhere to be seen now and the poplar provides shade for his stock and harvested trees provide farm income. Although export logs are an easy opportunity for poplar, Gordon likes the timber because of its decorative appearance and toughness. He is considering investing in a portable sawmill to process more timber on the farm. The Levets grow their own kawa poplar and prefer planting rooted cuttings as these grow straighter and are more drought-resistant than poles.

There are quite a few radiata plantations on the farm, mostly pruned. The most recent is managed by Gordon and Trish’s grandson who has completed the second pruning lift on his trees.

Although the original macrocarpa was a great success and an inspiration for Gordon, more recent cypress plantings have not been so successful. Gordon has been yet another victim of the canker-susceptible seedlines supplied to nurseries for the last 30 years. He regrets buying macrocarpa seedlings and Leyland cypress as these have succumbed to canker and laments not planting seedlings grown from the original trees planted by his father.

Hindsight is a wonderful thing, but some trees remain from the original planting and have stood the test of time as a canker-resistant genetic resource for this farm’s future. It is a regret that the reputation of this timber species has been tarnished throughout New Zealand by supply of poor quality seed for so long before we finally woke up. Now with a reputation in tatters, and undeserved, only the enlightened remain to pick up the pieces.

In 1966 Gordon constructed a large dam, which is more of a lake, at a cost of £100. This is very popular with duck shooters but also supplies water for the farm. Adjacent to the dam is a plantation of Japanese cedar Cryptomeria japonica which he planted on steep exposed country 30 years ago and is now mature. This is an impressive stand of trees, pruned and well managed, representing the dedicated effort the Levets have put into this farm over many generations, a legacy of tree planting that carries sustainability and diversification into the future. 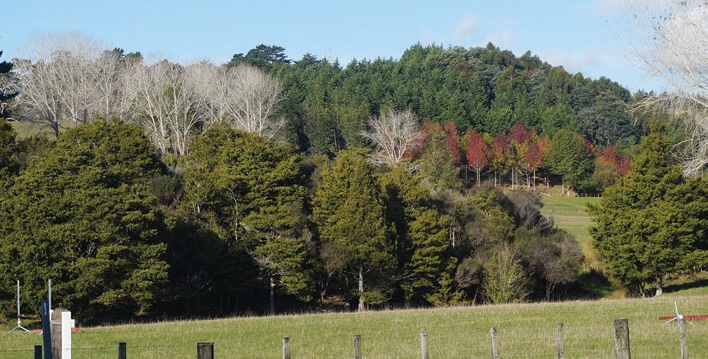 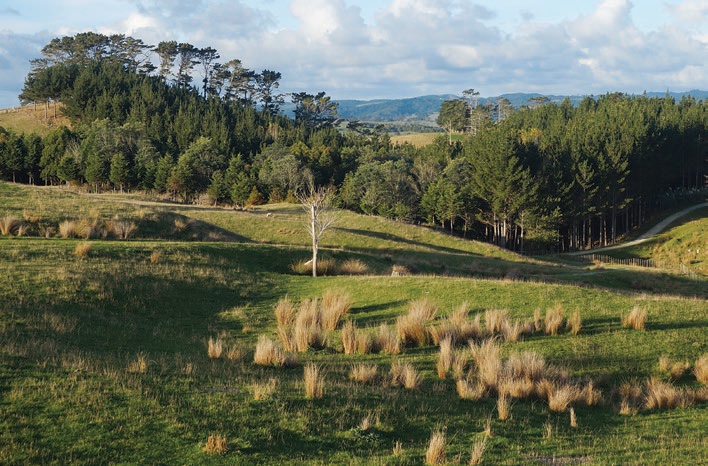