Scion scientists hope to answer these questions more precisely using data from trials established between 1978 and 1994 to examine the effects of genetics and final crop stocking on the growth, yield and wood quality.

The original commercial plantings of radiata pine in New Zealand were from bulk seed collected from California. Work on improving the growth and form of radiata pine began in the 1950s. Seeds were collected from vigorous trees with a good physical appearance or phenotype and seed orchards were established. The long standing breeding aim for radiata pine has been producing large, fast-grown and well-formed logs. This gave rise to the growth and form breed with the acronym GF. The initial work was slow. It took time for the progeny of improved seed to reach a size where improvements could be seen. Pollination was not controlled – the orchard trees could be pollinated by wild pollen blown on the wind and by poorly performing trees within the orchard. Genetic gains in tree volume of around 15 per cent were obtained and the first commercial seed was available in 1971.

By 1985, seed producers were selectively collecting from the better parents in seed orchards to increase genetic quality and produce seedlots for specific end uses. Forest owners and managers were provided more information about genetic potential when the Seed Certification Service was established in 1987. The genetic worth of seedlots in the growth and form breed was quantified through their GF rating, which was based on their diameter, growth and form − stem straightness and branching. Higher ratings promised greater gains. Where the original unimproved seed had a GF rating of between one and three, selecting for straight stems and more rapid growth increased GF ratings to 16.

Controlled pollination was introduced in the late 1980s. In 1997, the GF Plus scheme replaced the GF ratings and this scheme is administered by the Radiata Pine Breeding Company. Progeny from controlled pollination are rated under the GF Plus scheme for five traits − growth or diameter, straightness, branching habit, Dothistroma resistance and wood density. Trees with a GF Plus growth rating of 25 or more are becoming available commercially. 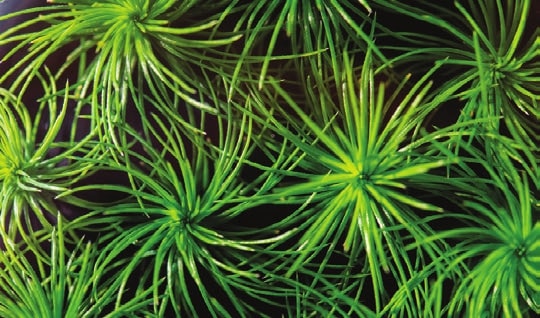 The aims of tree breeders have evolved to reflect the changing needs of forest growers and timber processors. Increased resistance to disease is one example. Finding trees with resistance to Dothistroma needle cast became a priority when this disease was first seen in the 1960s. Today, radiata pine germplasm lines have a Dothistroma rating, and planting high resistance seedlings in areas prone to Dothistroma reduces both the effects of the pathogen and the costs of controlling it. Similar work is going on at Scion today to identify trees with a natural resistance to Phytophthora pluvialis, the cause of red needle cast.

Wood properties such as density, stiffness and how much wood distorts and shrinks on drying have also become more important. These properties are under moderate to strong genetic control and can be selected for. There is now a GF Plus rating for wood density, while trees which have excessive spiral grain − the angle that the grain spirals around a tree, rather than running parallel to its trunk − are generally culled from breeding populations.

Other traits that are increasingly of interest include stiffness and reducing flaws such as external resin bleeding and internal checking. As the climate changes, improving resistance to drought to help trees cope with the expected warmer and dryer conditions could become another focus.

The environment in which a tree grows has a big influence on its growth, form and wood properties and can often trump genetics. The effect of temperature on wood properties is a good example. From north to south in New Zealand, the density of radiata pine decreases. While this might seem counter-intuitive at first due to the perception that slower growth is associated with denser wood, the main factor driving wood density and stiffness is the amount of late wood which is laid down in autumn. With the longer and warmer autumns found in the north and east, more late wood is formed in these regions.

Forest owners cannot alter the temperature, rainfall or the elevation of their sites, but they can make decisions on how to manage their forests. Factors they can control include stocking levels, and whether or not to prune. These forest management decisions and their effect on tree growth and wood quality have been the subject of intense research over the last 40 years.

Trials looking at stocking levels have shown that, across all sites, the greatest standing volume in cubic metres per hectare is achieved with a thinning to a final crop stocking of between 400 and 600 stems per hectare. This is somewhat higher than stocking levels in many current forests. With smaller price differentials between main log grades, there can be significant financial penalties from understocking a site because volume usually determines value. Stocking level is also related to wood density and stiffness, with higher values of these wood properties found in stands with higher stocking levels of 400 stems a hectare or more.

To prune or not to prune

Pruning affects growth and wood properties. To prune or not to prune is currently a question that many forest growers, both big and small, are asking. The decision about pruning depends on whether structural timber or appearance timber will be grown, which in turn is largely influenced by the prices for different log grades.

In the mid-1990s there was a large price differential for pruned logs, but this has generally diminished, although currently the differential is the highest it has been for a number of years. Without this substantial premium for pruned logs, pruned stands with low stocking densities have substantially lower volumes than unpruned stands and will produce lower financial returns.

Harvesting has started on an extensive network of silviculture-breeds trials containing seedlots within different levels of genetic improvement under different silvicultural regimes which span locations from Northland to Southland. This will continue over the next few years giving scientists and foresters a unique opportunity to examine the effects of site, silviculture and genetics on volume, value and wood properties at the end of the rotation.

Initial results from harvesting the first two trials in this series have shown that stocking is the major determinant of value, but the standing volume of wood produced by highly improved trees is generally greater than the volume produced by unimproved trees. In addition, the improved seedlots produce a higher proportion in volume of more valuable log grades due to improved stem straightness and branching.

Scion scientists working with the Radiata Pine Breeding Company have recently used site index based on height as well as the 300 index − a measure of volume productivity − to gauge the effects of genetics on productivity. This uses data from a network of genetic gain trials located across 46 sites. They found that planting highly improved GF Plus 25 trees increased site index by 5.6 per cent, the 300 index by 30 per cent, and stumpage value by 33 per cent, compared with plots planted with unimproved seedlots. The percentage gains in growth and volume seen were similar across all sites and regions.

The effects of genetic improvement on site productivity and wood density have been incorporated into the forest growth and yield simulation software Forecaster. This allows forest managers to make better decisions about which tree stocks to plant, appropriate silviculture regimes and even when to harvest to achieve the best outcomes for their site.

From research to results

A thorough understanding of what controls important wood properties is fundamental to manipulating wood quality using silviculture and genetics. Where the effect of genetic improvements on growth, yield and wood density have been quantified, these results have already been included in forestry modelling software such as Forecaster.

Forest owners and managers can estimate potential returns from different sites when silviculture and seedlot are varied, and have more control over the quality of the final wood. For example, selecting a seedlot with a high GF Plus rating for wood density grown on a colder site should lead to higher quality and better logs. Similarly, for a site with poor soils, better yields could be obtained by choosing a seedlot with a high GF Plus rating growth and ensuring that the site is fully occupied with trees in order to grow sufficient volume.

Testing wood from trees at the end of a rotation provides essential information for forest managers and researchers. Running a full suite of tests on trial trees with a known growth history provides a wealth of data that can show which intervention has worked and which has not, what might be improved in the future and how the dollar returns have been improved.

One response to the challenge of processing large numbers of samples quickly and efficiently is an automated system that scans wood samples. Scion has developed DiscBot, a robot that takes samples in the form of discs cut from the log ends of felled trees and puts them through a raft of tests. Information on wood composition is obtained using a near infrared camera that detects the different light absorbing qualities of lignin, cellulose and other components. Density is measured using X-rays, stiffness by the speed an ultrasound wave travels through the wood and spiral grain is detected by measuring the distortion of light transmitted through the wood.

The data from DiscBot will provide a more complete picture of how wood properties vary within a tree, how these are affected by genetics, silviculture and site, and which internal properties influence wood’s suitability for specific products and applications. The scientists working with DiscBot also want to use the information to better characterise the forest resource in the ground at present and ways to add value to it.

Choosing seedling with higher GF ratings adds cost. For owners of small and medium forests, deciding if the extra investment is worth it can be a bit like crystal ball gazing. Working with a knowledgeable forestry consultant, using Forecaster to model the potential returns for a specific site while varying silviculture and seedlot, should give a better understanding of the implications of choosing certain genetic characteristics over others.

As the trees are harvested which were planted in the mid-late 1980s, when genetic selections were first available, the answer to the question becomes clearer. Positive gains in volume and stem quality are apparent, especially for the more improved trees, and are able to be quantified.

How site, silviculture and seedlot interact is still complicated, but these inter-relationships are beginning to be better understood. Predictions made from models can now be tested against real data as trials to examine the relationships between site, silviculture and genetics on growth and yield reach maturity. What is certain is that the industry is making strides in understanding how to raise productivity at all sites and the value of forestry to forest owners, wood processors, end users and the country as a whole.

Funding for much of the research reported on here came from the Growing Confidence in Forestry’s Future research programme, which is jointly funded by the Ministry of Business, Innovation and Employment and the Forest Growers Levy Trust, with the support of the NZ Forest Owners Association and the NZ Farm Forestry Association. The research to quantify realised genetic gain for growth and wood density was supported by the Radiata Pine Breeding Company.

Contact John Moore for more information john.moore@scionresearch.com and see the latest results from the GCFF programme at www.gcff.nz

We would like to thank Maria Roman-Saavedra for the contribution of images and some of the results from her master’s research to the story Stop bugging me, which appeared in the May 2016 issue.