I would like to make an apology to all the farm foresters who visited our farm on the Pelorus field trip at the Blenheim conference in April. Due to the ‘diverse’ weather conditions on the day, which are not uncommon when living this close to Cook Strait, our planned presentations and discussions about the farm did not take place. This is our story.

The farm consists of two bays, Elie and Hopai which were originally two separate farms first settled around the late 1850s. Te Rauparaha’s raids of 1828 to 1830 had devastated the local Ngati kuia tribe leaving the land unoccupied and eventually available for government sale.

There had been a long list of owners by the time we bought the farm. Hopai in particular had a total of 12 different owners many of whom were absentees. As a result there had not been any significant input to the farm for many years − no plantings, shelterbelts, power yards or sheds.

Common to most areas in New Zealand, the early Marlborough Sounds settlers milled all the accessible native forest and then fenced and grazed the hills until the fertility ran out. When roads and power came in the late 1960s, gorse with other weeds and pests quickly followed. Fertiliser also became available about this time and was spread on the flats. However the high costs and requirements for the denuded hillsides spelled the end of farming on much of this hill country.

From scrub to farm to forest

My parents bought the property in 1979 and we took over in 1984, just before Rogernomics crippled the farming industry. Using government land encouragement loans we had been busy bringing back marginal steep hill country blocks, and then fighting the subsequent reversion problems of gorse, ferns and kanuka.

With the high fertiliser and chemical requirements, and then the high interest rates of the late 1980s, this became unsustainable and by the early 1990s forestry became an alternative solution. Even though we were initially not keen on radiata pine forests, we could see from the large numbers of wildings that they would thrive in this environment.

By 2000 the majority of the steep hill-country which we had tried unsuccessfully to farm was forested. Two-thirds of our forestry is radiata pine, which we have managed with appropriate pruning and thinning. However with local radiata harvesting returns at around 10 per cent of gross income to the grower, or about $7,000 a hectare, this is not going to be a major income earner. We have to hope that the other third of our plantings, where we opted for higher value hardwood trees, will make the farm viable for the next generation. 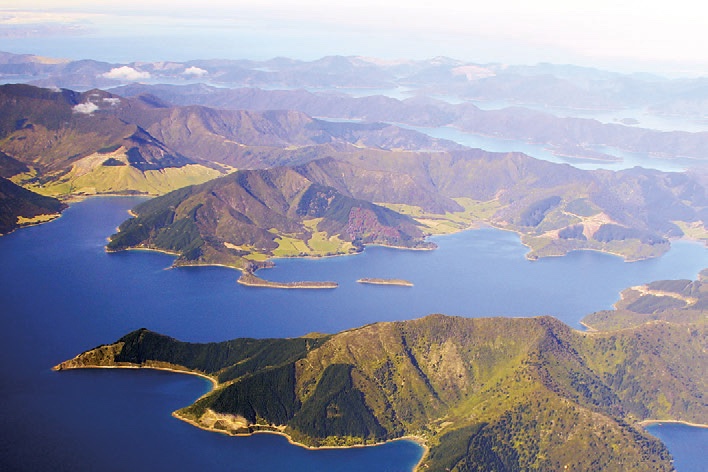 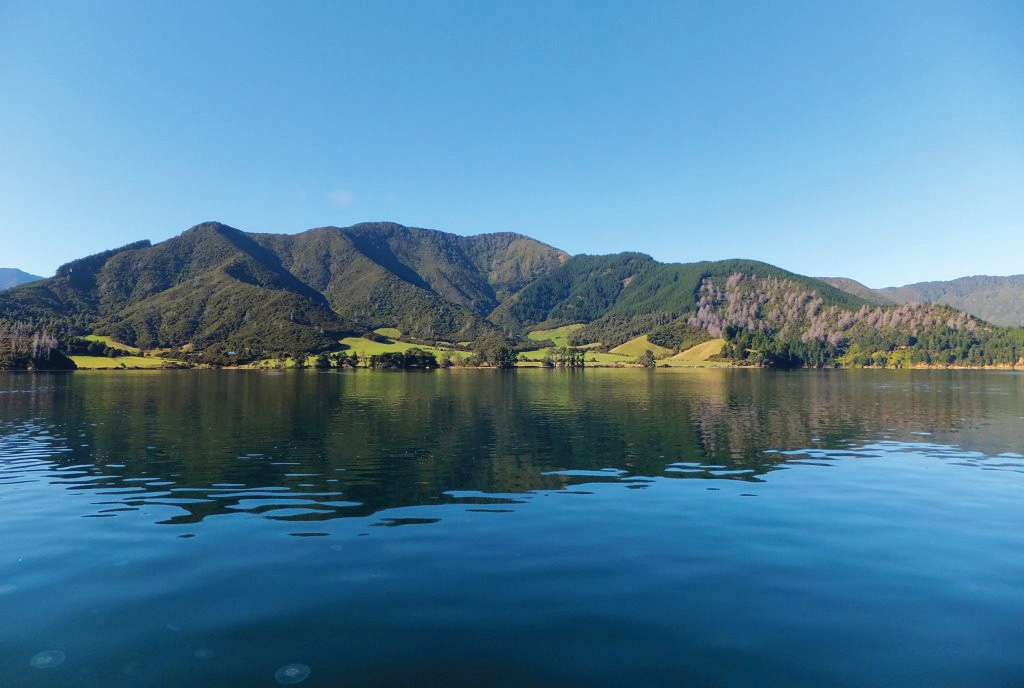 On the 160 hectares of farmed flats and easy hill we have 1,000 breeding ewes and 100 breeding cows. Production is good with an average gross income of $1,600 a hectare. Lambing and calving time is fairly busy as everything is expected to rear a baby, or two or three. Because of the high rainfall the ewes are shorn twice a year and produce a high yielding fleece.

Our Simmental cows do well and their calves sell at a weaning average of 280 kilograms. We also produce 250 bales of winter feed every year for the cows as well as crops for wintering and finishing lambs. Although production is good, costs are high due to our isolation from essential services. For example one unit load of stock is $1,500, and a tonne of lime is $82 before spreading.

Shelter on the flat paddocks has been a focus over recent years as the Marlborough Sounds are frequently swept with heavy rain and strong winds in the spring. Around four kilometres of shelterbelts have been established and all the creeks fenced and planted with a diverse mix of plants mostly propagated on the farm. Planting is mostly locally sourced natives, but also includes fruit trees and flowering shrubs for shade, shelter, bird and bee feed. This is now almost a full-time job – growing, planting, maintaining and carrying out the necessary weed and pest control.

One result of tree lucerne plantings in Hopai was the arrival of native pigeons after a long absence. Everywhere else round the farm the increase in bird numbers is very audible and visible.

Much of our time on the farm is spent on controlling problems. Wilding pines have become a big problem as they have invaded areas previously grazed. They are capable of readily establishing in any open ground from wind-borne seed carried from the pines around homesteads.

We started poisoning the wildings here about 10 years ago, our aim being to eliminate any pine outside a forest area, to help native regeneration and improve the aesthetics of our area. Many thousands have been dealt with already.

Plants we have to regularly deal with on the pasture land are gorse and broom, as well as blackberry in the shelterbelts and creeks. Climbing dock, old man’s beard, hawthorn, kikuyu and muehlenbeckia have become a problem with no grazing pressure. Although a native, muehlenbeckia is a noxious blanketing menace which tries to throttle any tree in its territory. Animal pests also keep us busy over the whole farm. These include pigs, goats, possums, rats and recently deer, requiring hunting and trapping.

In 2005 we entered into the Significant Natural Areas programme with the Marlborough District Council, which is a voluntary partnership to promote and protect areas of ecological significance. We have 620 hectares of regenerating native bush hillsides protected under this agreement. This has enabled us to apply for biodiversity funding for wilding pine control and protection fencing.

Similarly, we have several wetlands identified on our property which are being protected. We have had a good working relationship with the council staff and support the principles of these programmes as we are very proud of our special areas. By working to improve the ecological attributes in these areas with weed and pest control, and putting back in endemic native tree seedlings, we hope to help with their recovery.

All our forestry, and 350 hectares of the indigenous regenerating hillside are eligible for carbon credits. We carried out measurement plots on 29 sites in these areas in 2012 under the guidance of Nelson forestry consultant Roger May. This was a very big project, and we wait to see if there is going to be any benefit.

When we bought the farm the original homesteads had been subdivided, along with more than a dozen waterfront sections for holiday homes. We therefore lived in a small house on the property until our first child reached school age 20 years ago. Then we built a new house at the northern end of the farm within driving distance of the school bus.

Our three children have enjoyed growing up in this unique environment, and come home as much as they can. Our home, styled to look like an original homestead, is built overlooking Hopai Bay, Ouokaha Island and the peninsula. We used milled timber from the farm – macrocarpa, old man pine, matai and rimu. It is surrounded by a large garden fenced to the sea, with a lot of native and exotic plantings, a garden, orchard, shade houses, propagating house and a tropical hothouse – all of which allow us to be nearly self-sufficient.

We have worked hard over the last 30 years to establish a farm which is environmentally and economically sustainable, and also a beautiful place to live and work. It is a vision we hope the next generation will share.