The giant willow aphid, Tuberolachnus salignus was first reported in December 2013 from Auckland. By March 2014 this aphid could be found throughout the North Island and as far as Clyde in the South Island. This aphid has dispersed at a very rapid rate.

The giant willow aphid is large for an aphid with a body length between 5 and 5.8 mm. Willows are its only recognised host plant. Wingless individual aphids are mid-brown to dark brown with several rows of black sclerotic patches. The body is covered with numerous fine hairs, which give a greyish-golden sheen to the abdomen. There is a large dark brown tubercle in the centre of the back and the antennae are less than half the body length. Winged individuals have the forewing membrane unpigmented but the wing markings are dark brown. Waving a hand over an aphid colony prompts a collective lifting of the hind legs, and any physical disturbance of a colony results in rapid dispersal up and down the stem.

Adults give birth to miniature adults called nymphs. Each winged adult is reported to produce 34 nymphs on average, each surviving nymph capable of doing the same at maturity with maturation times ranging from 12 to 17 days depending on temperature.

The early season colonies appear in summer and are at the base of the willow trees but move up the stems with increasing numbers. During summer, colonies dispersing from other infestations start higher on the stem, some up to three-and-a-half metres from the ground. By late summer colonies can contain tens of thousands of individuals.

Colonies persist through the autumn and although they decline in late autumn, continue to feed on the stems after leaf fall and into late winter. Continuing growth and reproduction on leafless and dormant trees is unusual for aphids. Where they go from winter to early summer is not yet known.

This aphid reproduces parthenogenically all year round, which means they are all female and do not need to mate. No males are known. It has been reported in New Zealand on Salix alba, S. fragilis, S. viminalis, S. schwerinii, S. miyabeana, S. matsudana and their hybrids. It colonises tree willows and non-tree willows. 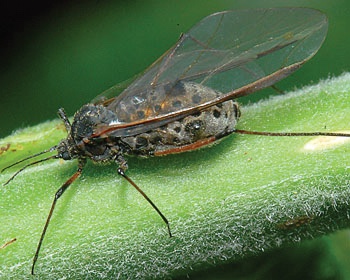 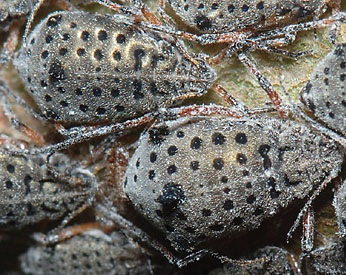 Effects on the host willows

The giant willow aphid has an adverse effect on the growth of the host trees and should be considered as a potential pest species in the context of willow as a production crop. The increase in tree water use in response to aphid colonisation may increase the effects of summer drought stress of the trees.

The honeydew attracts wasps, although bees are reported to be infrequent feeders. Honeydew is sugar from the tree which does not reach the roots, reducing the capacity of the tree to absorb water and nutrients. Deposition of sugar on to the ground has been shown to induce tree branching in short rotation coppice willow. Wasps are a probable indicator of aphid infestation as are sticky wet patches under willow trees.

Colony reduction by ladybirds and lacewings is low, possibly because they taste strongly of salicin and tannins. Some colonies overseas have been decimated by a pathogenic fungus which attacks the aphid internally, but the identity and ecology of the pathogen is not yet known. No parasitoid of the species has been recorded in Europe. In Japan the aphid is parasitised by a braconid wasp, a specific hyper-parasitoid which might indicate that this is where it is endemic.

We have no definite information on where, how or when the aphid arrived in New Zealand. Almost certainly it was an accidental arrival and probably from a relatively near neighbour such as Japan, Korea or China rather than a distant neighbour. It could have arrived in soil as it is suspected of over wintering underground, in which case arrival would probably be somewhere between October and December 2013 when it was discovered in Auckland.

Systemic insecticides which are friendly to bees provide the best chemical control approach. It may be difficult to effectively use contact insecticides from a boom.