Willows and poplars for drought feed

The drought last summer throughout most of New Zealand exposed the vulnerability of livestock farmers who depend on ryegrass-based pastures. Some had to use balage, silage and hay intended for winter feeding, while others depended on bales from the South Island or buying expensive meal. Yet many were growing willow trees on their farms which could have been used to feed their animals.

Over a million willows and poplars have been planted on farms during recent decades in the southern North Island alone. Since the 1950s, willows and poplars have been planted to prevent erosion on hill country and for shelterbelts. Initially, the Ministry of Works selected overseas forms which had resistance to diseases such as poplar rust and pests such as willow sawfly. Plant and Food Research still selects these trees at Aokautere, near Palmerston North, and regional councils then evaluate them to identify those most suited to their region.

Use as supplementary feed

There has been an increasing interest in feeding willow and poplar fodder to livestock during dry summers. In drier regions farmers have resorted to feeding willows almost every year, usually caused by desperation at seeing their livestock condition deteriorate as the drought worsened and pastures dried up.

Most dryland farmers de-stock in late spring when drought looks likely, but retain their capital stock for future years. However, in summers such as in 2013, farmers in regions not normally hit by drought were exposed and dairy farmers tried to continue milking. I saw some being on television, standing in browned-off ryegrass pastures, but with green willows in the background. I wondered why more farmers do not use these trees in dry summers. 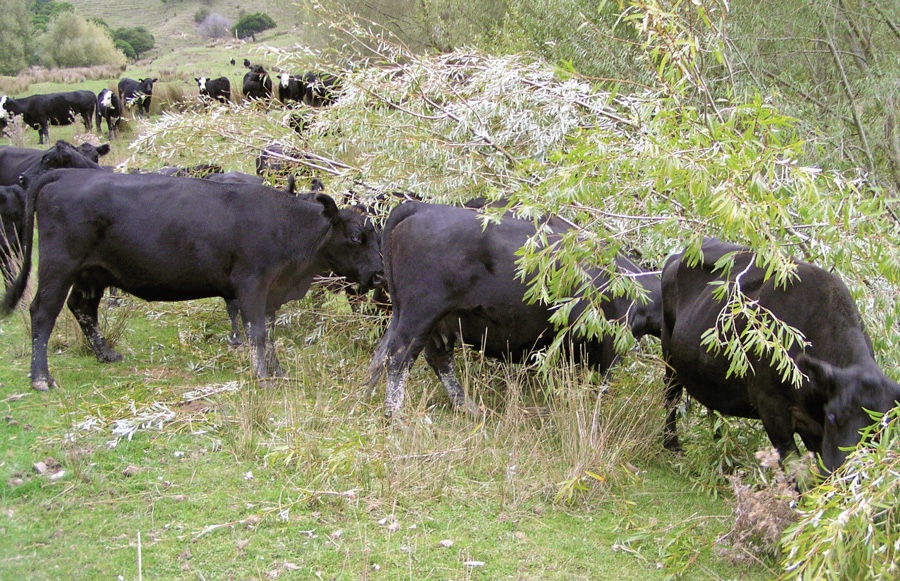 Some think that livestock just eat grass, and others lack the initiative to prune their trees, while more conventional feed supply seems easier to obtain. I still see farms bereft of any tree cover – the farmer must think they just get in the way. I can understand those growing crops wanting to keep birds at bay and farmers running large irrigators wanting no barriers for their rotating machines. However, trees should be grown on every livestock farm to provide shade and shelter and to enhance the land.

Willows and poplars are valuable for this purpose, but when they grow tall the branches become brittle and can break in storms, blocking farm tracks and falling on fences and buildings. Creating bushy lower-growing trees is common sense management, and these pollarded trees are ideal for supplying summer fodder. 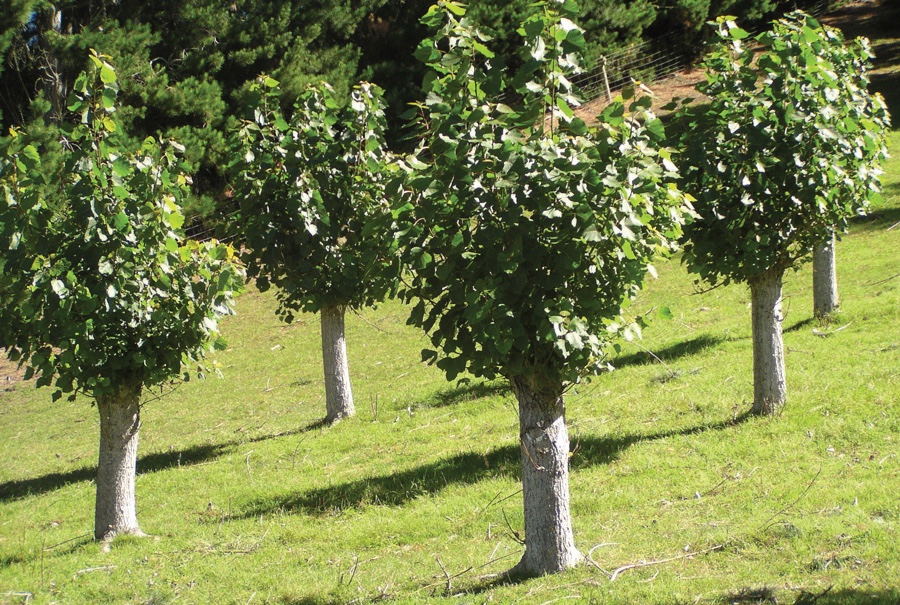 To do this a farmer should use a forestry ladder, designed for climbing into the lower part of a tree, and always tie it to the tree with a rope. One farmer I met had been stranded up a tree three times by cattle knocking the ladder away. Bright protective trousers, apron, mask and gloves are also essential to protect against kickback. Short training courses are usually available in most areas and these enable farmers to learn useful tips and procedures. 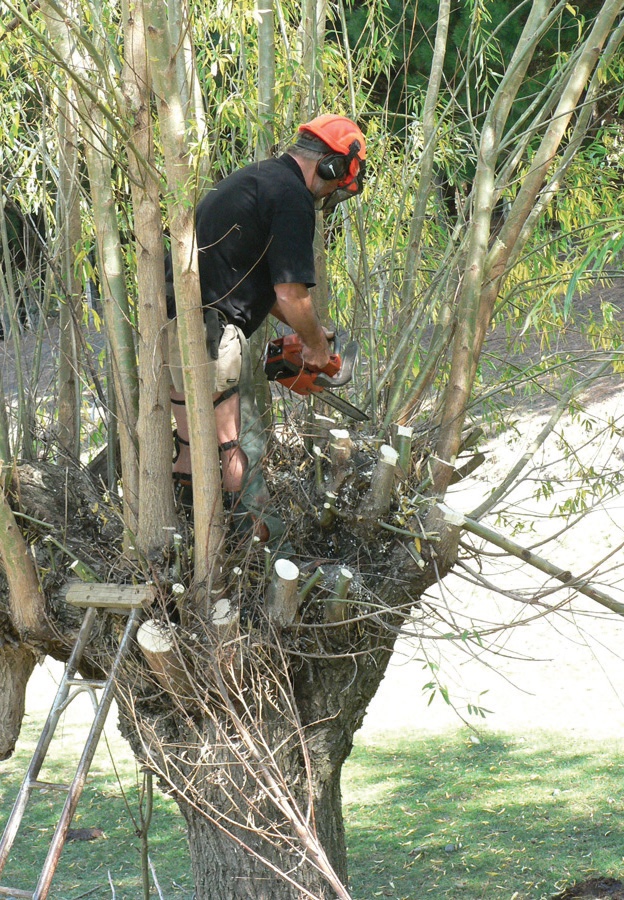 Backed and driven by interested farmers, some researchers from Massey University, AgResearch and Plant & Food Research, regional council soil conservators, some relevant farm consultants and I all joined forces to focus on using tree fodder and developing ground rules. I obtained information from farmers and heard interesting anecdotes that helped to develop guidelines.

Experiments in the Wairarapa compared feeding stock on drought pasture with stock fed supplementary willow, and the consultants looked at cost-benefit aspects. We held field days in the Wairarapa, Hawke’s Bay, Rangitikei, north of Gisborne and in North Otago. Finally, I produced booklets on using these trees on farms and guidelines for others keen to use them.

At one of the field days on Riverside, the Massey University research farm just north of Masterton, we saw a trial comparing sheep grazing drought-hit pasture and those also being fed willow prunings from the Akura Plant Nursery nearby. Ewes fed willow over seven weeks during mating had normal lambing and weaning percentages as though there had been no drought, whereas those grazing only the dried pasture dropped 30 per cent.

That afternoon the sheep were well away from those attending until willow cuttings were spread out near us. We watched the sheep ignore us, run in and devour the fresh willow, returning later to chew the bark.

We also saw several browse blocks growing on wet unimproved areas at Riverside from planted metre-long willow wands at metre spacings both ways. These were allowed to establish for a year, then browsed by sheep during dry summers, followed by mechanical trimming to keep them low growing.

Tree fodder is not new

Some farmers have been using willow fodder for over 20 years and find it well worthwhile. In northern Hawke’s Bay, Alec Olsen began pollarding willows in the early 1980s on his farm by cutting trees which were about five years old two metres above the ground. They redeveloped as bushy fine stems, and he was able to prune these using a light high-revving pruning chainsaw. 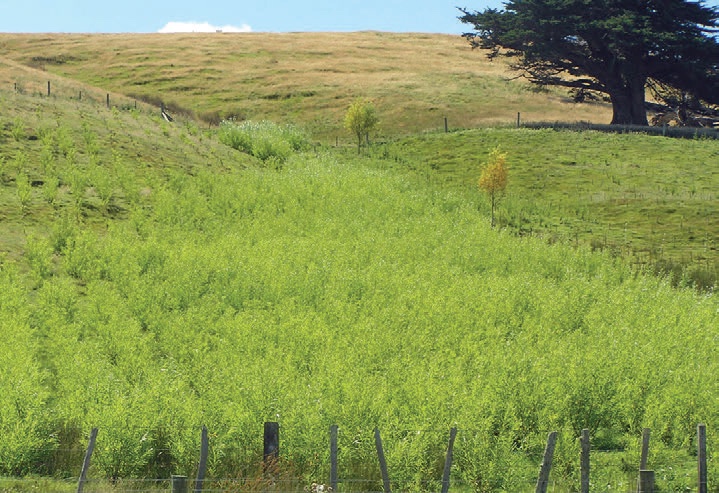 Thirty years later Alec is still pruning these trees most summers and their trunks are now almost a metre across. However, he emphasises the need for some training with an experienced forester to approach tree growing for any purpose on the farm. The late Jim Pottinger wondered why more farmers did not use tree fodder as he had been doing it for over 40 years.

One Wairarapa farmer I interviewed was desperate one summer when his pastures browned off, so he tried pruning a poplar tree one morning. He started his chainsaw and the sheep all vanished in fear, but he pruned the tree and left it. The next morning he went to the same area to prune another poplar, started his chainsaw, and the sheep all came running towards him. He slept much better after that.

A Hawke’s Bay contractor told the story of cutting down a poplar tree and using a chipper, collecting three tonnes in his trailer. He parked it overnight in his deer paddock, but the following morning the chips were all gone, and his deer were looking for more.

Peter Gawith farms near Longbush in South Wairarapa and has been feeding willow and poplar cuttings to his livestock since the 1970s. He led our tree fodder Sustainable Farming Fund team for seven years. He recommends tangoio willow as the most suitable selection for tree fodder. Peter also advises farmers to coppice them just above ground level in blocks for sheep browsing, or to pollard them just above cattle reach in blocks on unimproved wetland areas.

Peter told me that 2012 was the only year in the past five years he has not had to feed trees. He says feeding willow tree fodder is now standard practice on his property in a dry summer. Some of his willows have been cropped three times and he has also been planting blocks of willows in boggy rush-infested areas and pollarding them above cattle height. This keeps the stock away from watercourses and steep gullies and, more importantly, gives him a safer working environment.

Living in dryland North Otago near Palmerston, John Prebble is another enthusiast for feeding willow and poplar fodder during droughts. He established a 1.5 hectare block of flevo poplars following the 1988/89 drought. He only cuts the trees in a dry year when needed. Around 15 trees are pruned each day, and John uses electric fencing to ration the feed. He trims five-year-old trees by cutting through the trunk at shoulder height, enabling him to work more safely from ground level. His sheep graze the pastures around the trees without reaching any tree regrowth. 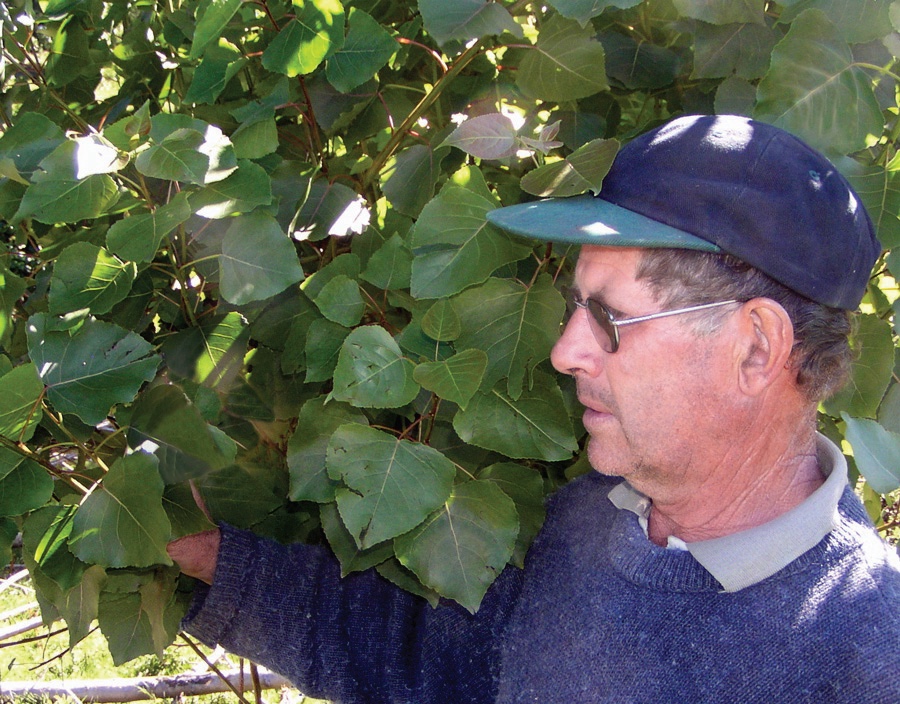 While visiting Australia in 1986 I met Frank Crofts who ran a sheep farm near Bathurst on the New South Wales Tablelands. After retiring as Professor of Agriculture from Sydney University, he had bought the farm because kurrajong trees were abundant on it. He has survived two five-year droughts by hand-pruning these trees daily from up a ladder. Farmers in many countries let their animals browse trees and shrubs. I am told that more animals live on this fodder in the world than graze grass-based pastures. According to the Bible, even Jacob fed his sheep on tree fodder and they thrived.

On the other side I have met farmers who strongly advise against tackling mature trees, which can be lethal and should not be cut by an inexperienced person. Willows can ‘barber- chair’, that is they suddenly break off when you are mid-way through cutting them. This leaves a vertical ‘chair-back’ and a falling, heavy branch which can easily knock the operator out of the tree. Employing experienced and qualified foresters to fell these makes sense.

How to feed willow fodder

Willows and poplars can be bought as poles from regional council nurseries and other rural plant nurseries suppliers for planting during late winter and early spring. Some poplar selections have resistance to rust disease which makes their foliage unpalatable to stock. Others have been selected as being unpalatable to possums, so are not so useful for fodder. Local regional council staff and tree suppliers can advise on the suitability of selections for drought feed in a particular district.

Pruning them every other summer is feasible once they are growing well. When they are about five years old, willow and poplar trees can be pollarded by cutting them off about two metres above ground. The re-growth is bushy and above stock reach and there are plenty of fine branches for pruning. It is much safer to prune these thinner branches at this height, and each tree can be thinned rather than topped.

These trees will continue to act as water pumps and their spreading root system helps to prevent erosion on unstable hill slopes. As they lose their leaves over winter a good pasture will develop under them, giving two feeds for the price of one.

Poplar trees shed their leaves when a drought sets in. In summer these leaves are usually more palatable than most available pasture at this time unless they are infected by rust disease. The livestock grazing under these trees tend to eat the leaves as they fall which are rich in trace elements. Farmers call the falling leaves pennies from heaven.

One of the reasons that poplar and willow foliage can provide better feed value than poor or dried-up pasture is because they contain valuable compounds called condensed tannins and phenolic glycosides, such as aspirin, according to research by Associate Professor Peter Kemp of Massey University. He found that five to 10 year-old tree gives up to 22 kilograms a tree of edible forage. Poplars and willows were similar in nutritive value, although the condensed tannin level was usually higher in willows. The bark also had good nutritive value.

Is it worth it?

Consultants analysed results from trials, and reported that while there is a cost to feeding tree fodder, any bought-in feed is probably much more costly. In addition, feeding the farm-grown tree fodder can be a very satisfying morale booster for a farmer in such desperate straits.

Livestock farmers enjoy breakfast, lunch and dinner – and so do their animals. These farmers would hate to eat just potatoes for every meal, yet expect their stock to graze just ryegrass pasture. To keep stock in good condition a farmer should grow ryegrass-based pastures as a major feed supply, but also have mixed pastures.

These would contain deeper-rooted grasses such as cocksfoot and tall fescue mixed with red and white clover, and also grown with grazing herbs chicory and plaintain to provide seasonal nutritious fodder. Fodder crops such as brassicas and lucerne are other options, and shelterbelts with plenty of willows and poplars over the property will supplement the farm’s feed factory.