Our farm forestry community is rather like our indigenous forest ecosystem, full of wonderful unique inhabitants with diverse niches and experiences. Like many ecosystems some of our inhabitants are subtle and shy, some are tall and solid and strong, and others are raucous, in your face and always up there in the sunshine getting the big picture. Many of us are a mixture of all of these things.

For most new members of the NZFFA they discover a treasure trove of people, ideas and knowledge. For the older members of our organisation they will remember the strong links to the forestry science community that were maintained by a group of scientists who worked for the Forest Research Institute at either Rotorua or Rangiora. They were a dedicated bunch who every now and then managed to get leave from and come and present their latest findings to NZFFA conferences and field days. One of these people was Ian Nicholas.

A lot of parts

My first impression when I met him some 16 years ago was − this little guy was part-scientist, part-farmer, part-historian with a dash of bantam rooster and Napoleon Bonaparte thrown in for good measure. He seemed to be always in the thick of things, on a bit of a crusade, and giving great presentations to information hungry audiences on topics that the corporate forest industry may have considered a little bit fringe. There were talks on blackwoods, eucalypts, paulownias, poplars and shelter, with effluent treatment and biomass plantations thrown in as well.

Ian started his career with Forest Research Institute as a technician in the late 1970s, fresh out of forestry school and newly married. His job in those days was to measure tree plots and collect information for the scientists at his new workplace. Part-way through his career he completed a masters thesis. Ian was offered the chance to join a group of scientists who were teasing out all the nuances of radiata pine growth and management. Instead, he chose a path that was of more interest to small forest growers such as ourselves. This meant that he spent a lot of time setting up trials for species such as acacia and eucalypts.

He was good at linking into organisations from outside the traditional forest science community for his work. His project with the land treatment collective to measure the performance of land-based treatment of waste water using trees as biological filters is a case in point. For those people who were lucky enough to travel in the car with Ian, there was a running commentary of the trials that he had been involved with as we passed by. Sometimes, when time allowed, there was a short trip back to the site for a couple of photos or to quickly put in a PSP... ‘It will only be about an hour and we do not have to be back in Rotorua until tea time,’ he would say. 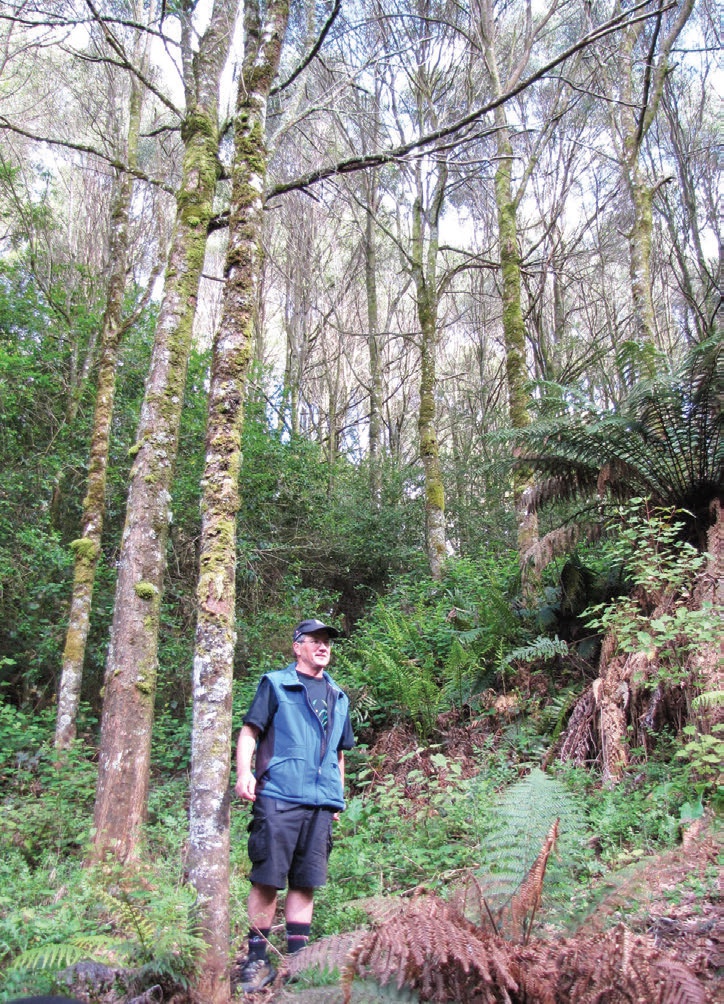 Science to the people

Ian was a people person at heart and that is why I suspect he gravitated to farm forestry and its membership. He was passionate about getting the science out to the people. I imagine that the formation of the blackwood action group, AMIGO, was in no small way influenced by his desire to get his research out to the people who needed it and not having it gathering dust on a shelf somewhere.

He was always encouraging, and so when a group of us who were passionate about eucalypts were bouncing around ideas on forming an action group he said ‘get on with it, just get it formed and we will worry about the details later.’ He was very supportive of farm foresters doing research that needed to be done and that was not going to be funded out of the normal science budget at the Forest Research Institute.

The eucalypt stringybark species trial is an example. We wanted to connect all our anecdotal dots with something uniform and formalised, and the Forest Research Institute needed some more dots on their maps to back up their own in-house research at the time. True to form, Ian reviewed the species lists and added a few of his own which were a bit fringe but needed to be linked to some other work that he had going.

This was typical Ian, lots of balls in the air and all linked together with invisible elastic so that the big picture could be pulled together one day. Last year when we were recording all the growth data from the eucalypt species blocks, I jokingly told him that these fringe species were going to be known as ‘Ian’s weeds’ as the damn things grew so well that, in many situations, they left our hallowed trial species in their dust. I think he must have known a thing or two just quietly.

A large legacy of information

Now to the present. Ian was returning home from Chile last October, having led a group of farm foresters and old colleagues on another one of those trips away that he always managed to slip in, when he suddenly became deaf. He was diagnosed with an aggressive brain tumour last November, and despite surgery and the best treatment available he died in late March little more than five months later.

It is hard to fathom how someone who was always on the go, had so much energy, and had so many projects left to do could be struck down so quickly at a time when he was possibly approaching the pinnacle of his career. Ian had set up his own consulting business after taking early retirement from Scion, and was in the process of joining all the dots on all those ‘balls in the air held together with the invisible elastic’ and throwing up a few more balls for good measure.

From a farm forester’s perspective Ian has left us with a large legacy of information which was collected over his career and then assembled into a readable form for rank and file foresters to use and understand. This includes the electronic handbook series for blackwoods, eucalypts, cypress and redwoods, his guidance in the eucalypt species trials, and setting up his latest project, the Trees on Farms workshops. It is these, along with his own professional archive of information, which are available to us as Ian’s legacy.

I think that one of the interesting ironies of Ian’s life is that his father, a farmer from out west of Piopio in the King country, spent his early twenties clinging on to life over Europe’s war-torn skies flying in an aircraft built almost entirely of plywood, manufactured from western hemlock, a fringe forest species considered at the time to be second rate and of little use. In his lifetime, Ian spent a lot of his own research career making fringe species acceptable and usable for farmers and foresters, and proving to the forest establishment that there was potentially more than one cab on the rank for tree species.

It is fair to say that in our forestry community one of our forest giants has fallen. He was not the tallest tree in the forest, but his branches stretched far and wid. In common with all forests, when one of the forest giants falls there is a large space left behind. This one is larger than most.