On Friday 13 April four busloads of attendees of the conference visited Verterburn Station, where they were hosted by Robert, Jill and Andrew Reid. Located about 25 km west of Outram in mid-Otago, Verterburn ranges in altitude from 400 to 525 metres above sea level with an evenly distributed rainfall of 900 mm and with regular heavy winter snowfalls.

The total area of Verterburn is 1,390 hectares, mainly sheep and beef breeding and finishing, currently carrying about 7,500 stock units. The effective farming area is 1,360 hectares. This is expected to decrease slightly with further planting of Douglas fir in the next two years.

The property’s southern boundaries include five kilometres of Lake Mahinerangi water frontage. The soils on the property are free draining, which is an advantage during winter. However soil fertility in the unimproved tussock land is low.

Robert and Jill Reid purchased Verterburn from Robert’s father in 1979. At that time it was largely an undeveloped tussock block with approximately 80 hectares in pasture, limited fencing and no buildings. It was carrying approximately 800 ewes, 200 hoggets and 100 cows. Now, after 30 years of farm development the livestock over winter is expected to consist of 3,800 ewes, 1,300 hoggets and 170 rams. Cattle numbers will be 150 cows, 375 heifers and nine bulls.

In farm management, stock welfare and snow damage to trees are major considerations. Snow storms from the south-west can create large dumps of snow on gully edges and in the gullies. Pine trees have been shown to be very vulnerable in this environment and are no longer being planted on Verterburn. 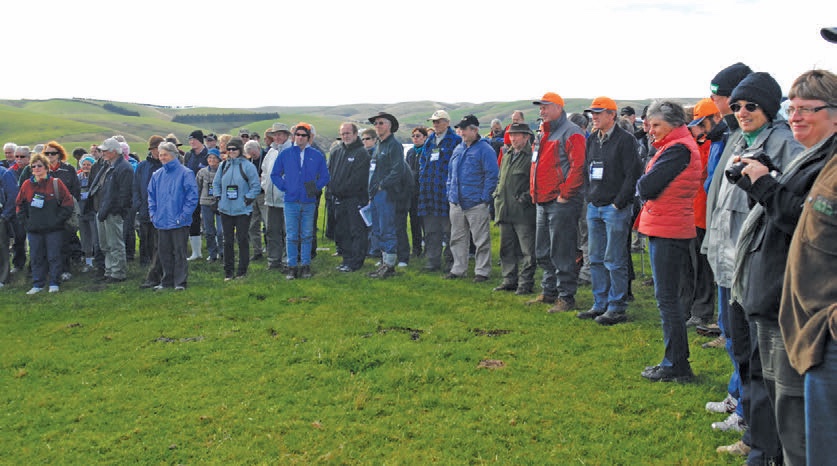 The focus is now on planting Douglas fir. Gullies are fenced off and the many wetlands and bogs on the property are not planted. In practice this means that some waterways are no longer available for livestock so dams and ponds have been constructed to ensure a regular supply of water for the stock.

A total of 60 hectares of forest blocks are planted. These are mainly Douglas fir, with just half a hectare in macrocarpa and a small block of mature pines. Shelterbelts have been established on strategic arable paddocks and to link with the Douglas fir woodlots in the gullies.

For the 2012 planting season it is expected that 40 hectares of Douglas fir will be planted at 1,400 trees a hectare, with these plantings being undertaken under the Afforestation Grants Scheme. In 2013 it is planned for another 13 hectares to be planted in Douglas fir. This will bring the total forest estate up to 113 hectares or eight per cent of the farm’s area. Consideration was also being given to including the main forest blocks within the ETS programme.

Shelterbelt establishment continues on an annual basis. Many species have been tried with varying success. Those tried included Leyland cypress, macrocarpa, eucalypts, oak and larch. Redwoods in a single row are showing promise on the arable exposed areas. In discussion, Robert Reid indicated that his main reason for planting trees was for stock shelter, not for their timber value.

In the farm development programme, now in the hands of son Andrew, there has been a conscious effort to ensure that there was little effect on water quality. A total of 40 dams have been established with crossings provided to discourage stock from walking in the creeks. Fertiliser is applied in February to ensure maximum uptake from the autumn rains and to minimise damage to the ground by the trucks. To reduce run-off on the Lake Mahinerangi boundary, large undeveloped areas are left by the waterway when ploughing the paddocks.

The Reid’s farm is one of the South Island farms in the Agriculture Research Group on Sustainability programme. The farm has been involved for seven years in studies on soil fertility, earthworm status and water quality, especially where bogs, wetlands and tussocks exist. Studies and projects on the farm have also been undertaken on bird-life, environmental indicators and monitoring.

Mark Dean, Southern Regional Planner for Ernslaw One, led a thoughtful and lively discussion on Douglas fir. The data for the stand we were viewing included –

Using the Douglas fir calculator and a clearfell age of 50 years, Mark illustrated effects on stocking levels, volume and stumpage. He discussed how best to control branch size, taper and economic return when the market changes. He concluded with the need for Douglas fir growers to retain flexibility to respond to changing signals, such as carbon prices and cash flow needs throughout the rotation.

Henrik Moller and being heroes

During the lunch break we enjoyed the distant view and surroundings in front of the homestead. Professor Henrik Moller, from the Centre for Sustainability: Agriculture, Food, Energy, Environment at the University of Otago gave an excellent and thoughtful address on the sustainability programme and what it is required to achieve.

He specifically told everyone that farm foresters are ‘my heroes’. He elaborated by saying that if farmers could get more trees back in the right places in the landscape, then they could give the country an enormous gift in the long run. One priority for the country’s production landscapes was to get more woody vegetation out there. We need to find more people like Henrik Moller.