The heavy snow fall in Canterbury in June this year, along with the heavy snow of August 2011 causing damage to some forests in the Wellington and Upper Hutt area, raises questions as to the relevance of snow storms in New Zealand forest management. The types of questions asked include –

Generally physical damage to forest caused by snow has been categorised into three types – avalanche damage, damage related to snow creep, and snow break with some stem deformation. The first two categories are generally restricted to forests growing on steep slopes at high altitude and are not usually of relevance to farm foresters. It is the category of snow damage referred to as snow break and stem deformation which is of significance.

During most snow storms, damage of this nature is usually minimal with only occasional twigs and branches broken. However, when accumulation of snow in the canopy is heavy, estimated at 250 tonnes a hectare on one occasion, damage is considerably more extensive.Young saplings and poles can be completely flattened and large trees uprooted, badly tilted or bent. Main stem breakage can be quite common even on trees up to 30 cm diameter, crown damage may be frequent, and even the largest trees can be stripped of branches. 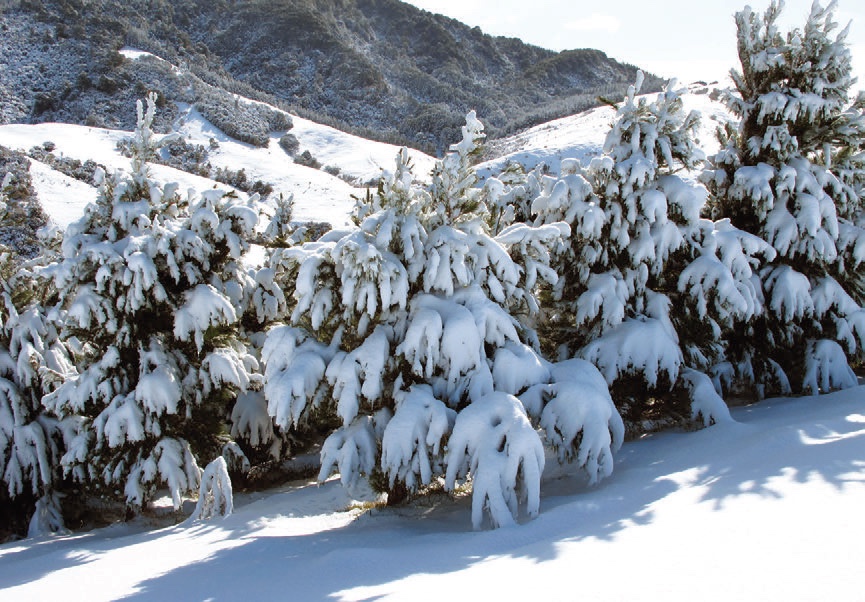 Heavy snowfalls sufficient to cause significant damage to trees are not a new phenomenon for some parts of New Zealand. However, such falls tend not to occur throughout the country but are local and usually they are episodic. That is, there is usually an irregular and often considerable time interval between successive heavy falls in any one area.

People also tend to have short memories and there is often the belief that the event that they witness is unusual and of much greater magnitude than anything that has happened before. This lack of recall for such events relates partly to the short history of reliable meteorological records in New Zealand and the reliance of word of mouth accounts. Such accounts tend to become less reliable with the passage of time.

Probably the earliest description as a major snow storm in New Zealand was of the 1867 storm which affected Canterbury and parts of Otago. This storm is described by Lady Barker in the book Early Station Life in New Zealand, published in 1887. Considerable stock losses resulted from this storm which deposited up to two metres of snow in places. It was described in the book as beyond anything that European pioneers had experienced in New Zealand before, and it was considered that such an event was unprecedented. The comment was made that ‘There has never been such a storm before, for the Maoris, who are strong in weather conditions... said they have no legend of anything like it ever having happened’.

It is unlikely that the storm was unprecedented, as in Canterbury other snows of similar magnitude have occurred, usually at intervals of between 20 to 30 years. Since 1867, dumps of snow between one and two metres in depth have been recorded on a number of occasions, for example in 1918, 1945, 1973, 1992 and now 2012.

There are no records of the earlier reported snow storms causing damage to trees or forest. The records relate mainly to stock losses and inconveniences affecting travel or survival. One of the first records of damage by snow to trees and forest was by Norm Elder in 1959. He recorded massive snow break in the canopy of beech forest in the Kaweka range. Extensive snow breaks in beech forest in the Tararua range was recorded by Druce in 1966, and since then there have been a number of other records of damage as well, with the most relevant being in 1969 and 1974. Almost invariably these records relate to damage to native forest, mostly beech forest.

Influence of the site

The most significant damage is usually where there is a combination of heavy snowfall and wet adhesive snowflakes, along with lack of protection from wind. Such conditions are most likely to be at relatively low altitudes, and most often there a decrease in snow damage with increase in altitude.

In addition, damage to trees is generally most severe on lower slopes and terraces rather than on the upper slopes where increases in air movement are more likely to reduce the amount of snow accumulation in tree crowns. We had a good example of this with Douglas fir on our property at Woodside Forest. Douglas fir, which is generally considered to be a suitable species for growing in snow prone areas, suffered considerable damage during a snowfall in 1992. Stems up to 15 cm in diameter were uprooted, bent and broken, whereas similar aged trees on exposed sites higher up the slopes suffered only minimal damage.

Other factors such as soil moisture can also have an effect on the extent and type of damage. With deep soils which are already wet at the time the snow falls, uprooting of trees is the most likely form of damage. Where the soils are dry, or where the roots of trees are well anchored, stem breakage is more common.

Our property is located at an altitude of around 500 metres in the Canterbury foothills in what is generally considered to be a snow prone area. Since purchasing the property we have experienced two major snow storms, in 1973 and 1992. During both storms around a metre of snow accumulated on the ground, and in both cases trees suffered major damage.

As well as these two storms there have been a number of falls of lesser magnitude which have caused some tree damage. By observing the effects of these various storms we have been able to make a number of tentative deductions. Overall, other than small branch breakage, damage is minimal until snow depths exceed 10 cm. However, once the depth of snow exceeds 20 cm, the amount of damage increases considerably. Saplings and poles become permanently bent or uprooted, and snapping of large branches is quite audible.

We have also observed that most trees species on our property, even those which have evolved in northern hemisphere snow prone areas, can sustain considerable damage when grown here. Previously we believed that deciduous European species were least likely to be vulnerable to snow damage but this has proved not to be the case.

The photograph shows European larch exhibiting badly bent and broken stems following one of our snow storms, and we have noticed similar damage to European deciduous hardwoods. Heavy snow storms can occur outside the dormant growth period for these species in New Zealand, and at low altitudes here the snow is usually heavier and wetter than equivalent snow storms in Europe. These are undoubtedly factors which make these species more vulnerable when grown in New Zealand.

Another misconception we had was that species with high wood densities would be able to withstand heavier snow loads than species with soft low density woods. This proved to be not necessarily so. The redwoods and native cedars with low wood densities have shown relatively minimal damage which is probably related to tree form. Both groups have strongly tapered trunks which presumably give some resistance to toppling and stem deformation. Both groups also have narrow crowns with branches which tend to be deflexed and are more likely to shed heavy snow loads. In comparison, many eucalypt species and robinia with high wood densities have wide spreading crowns and are more vulnerable to damage. In addition, many high density woods tend to be brittle, with branches which break easily under heavy snow loads.

Even within a related group of trees such as the cypresses, susceptibility to snow damage can vary considerably. Mexican cypress has shown such extreme stem deformation with even moderate snow falls that we no longer plant it. On the other hand, the Arizona cypress has shown little damage at all and there are indications that the two clones of Leyland cypress we are now planting, ovensii and fernsdown, will withstand even heavy snows.

Our two major timber tree species at Woodside are radiata pine and black beech. Whereas our radiata has all been planted since 1973, the black beech was already present, mostly regrowth following removal of grazing stock subsequent to the depression of the 1930s.

Although these two species are very different, one being a softwood and one a hardwood, the influence of heavy snow in both is fairly similar. In both, similar principles apply relating to appropriate silvicultural practices to reduce snow damage.

In both species the damage is most pronounced at the sapling and pole stage. The type of damage at this stage mainly consists of main stem deformation and breakage, and the toppling of young trees. If the stands are densely stocked, there is often a domino effect with whole groups of trees being flattened under the weight of snow.

However, even though the initial damage in both species is similar, there are pronounced differences between them when considering stem recovery. If stands of young beech are not too dense, badly bent over stems which are not split often eventually recover. They may become perfectly upright again, although this may take a year or more. Stems of radiata pine on the other hand invariably remain deformed and effectively worthless.

As stands of both species age, the type of damage sustained by snow tends to change, but for both it is strongly influenced by stand density. Unthinned dense stands suffer most from stem bending, breakage and uprooting, and damage of this nature may persist into the pole stage and even occur on stems exceeding 30 cm in diameter. However, well managed stands, thinned to the level that a small branch size is attained, may suffer very little damage at all.

The level of thinning is critical. Trees of both species which have been allowed to develop under wide spacing regimes are particularly vulnerable to snow damage. Wide spacing allows for the development of large side branches and crowns which tend to accumulate heavy snow loads. This results in severe large branch breakage and loss of tree value. Therefore, in snow prone areas, silvicultural practices and regimes, particularly relating to thinning intensity, can have a large effect on the degree of snow damage sustained and stand stability.

John Wardle is an authority on sustainably managed beech and radiata pine forests in the South Island.