On the Tuesday afternoon of the conference, the sun shone and the convoy of buses negotiated a narrow field gate and ambled across a couple of grass paddocks to bring us to the starting point of our visit to Rewanui. Rewanui is a 334-hectare property, owned by the Montfort Trimble Foundation, a local charitable foundation dedicated to growing trees for the benefit of local people. The farm lies about 23 km east of Masterton on the road to Castlepoint.

The Montfort Trimble Foundation bought Rewanui in 2004, using profits made from harvesting in Trimble Forest, another forest it owns. The land is typical eastern Wairarapa sheep and beef country, with productive flats close to the road, and rolling to steep hill country behind. The farm is summer dry, while heavy rain in winter can cause severe slips and slumping on the hill grazing land.

Rewanui’s unique feature when it was taken over by the Montfort Trimble Foundation was its remnant native bush, which comes right down to the road. Large mature trees stand out above the dense, regenerating understory. The bush is recognised by the Department of Conservation as one of the best remaining examples of lowland native forest in the district.

Many interesting things are happening at Rewanui, with the overall aim of encouraging farmers to think beyond their traditional farming practices, and incorporate trees to add resilience to their farming systems. The Montfort Trimble Foundation is generating information about planting and managing trees, and encouraging wildlife, on this typical east country land. 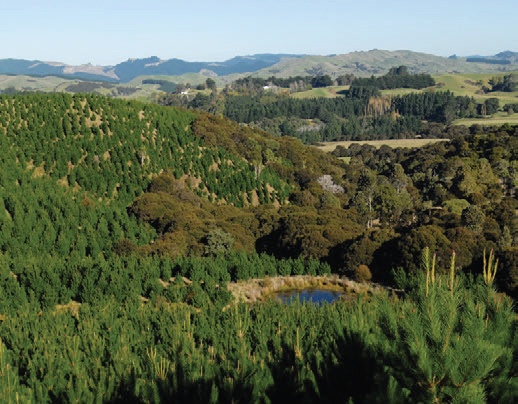 The focus of the conference visit was the array of trials which has been established to demonstrate alternative species to radiata pine. The trials were planted in 2006 and 2007, and after four or five growing seasons, there is plenty to see and discuss, and some interesting information is starting to come out of the trials.

Exotic species in the trials are coastal redwood, Japanese cedar, lusitanica, Ovens cypress, Douglas fir, messmate Eucalyptus obliqua, Japanese larch and western red cedar. The plots are next to each other and easy to access, so it is easy to compare different species, and in some cases, different clones or varieties of the same species. Each plot is clearly labelled, with a plot map, and the latest monitoring results on display. Every tree has individual identification in the form of a marker cane and aluminum tag, and is measured once a year. 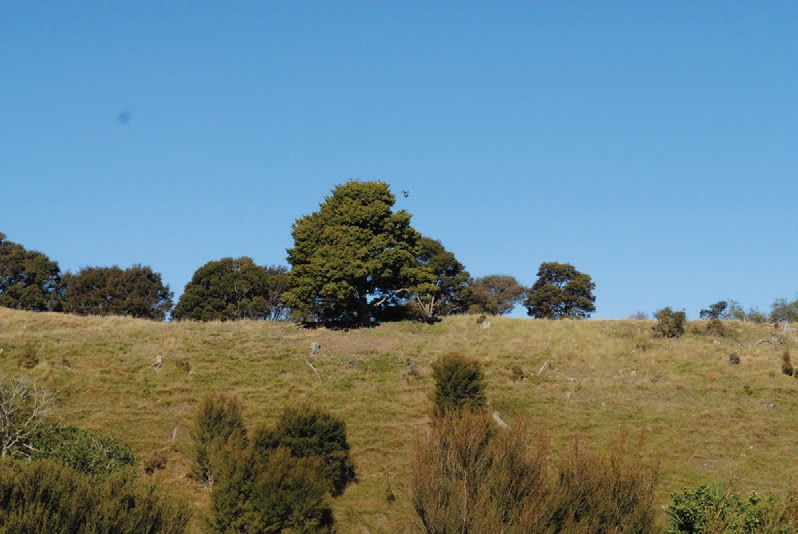 The plot data is recorded on a software system designed specifically for Rewanui by Ian Campbell, chair of the Montfort Trimble Foundation. In Ian’s former life he developed various software packages for farmers. The system he has designed for Rewanui provides an easy-to-interpret pictorial record of each plot, with tree survival and growth information, management history and other details. 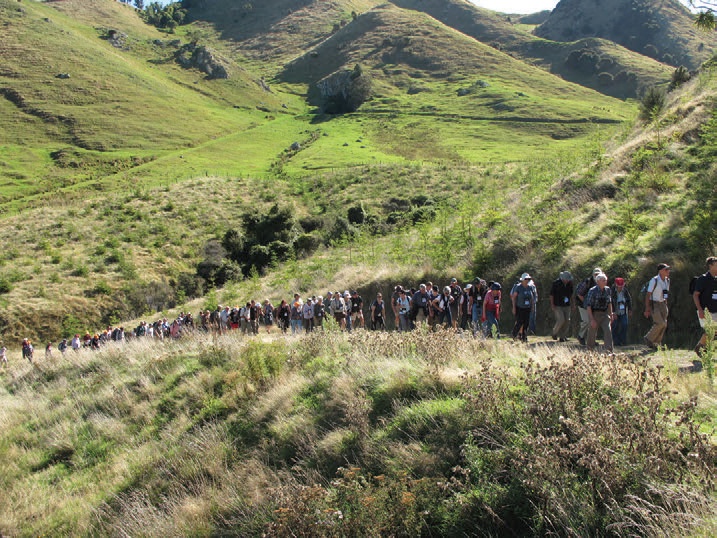 The redwood plots were very interesting. There are four plots of different clones sourced from the NZ Redwood Company, and one plot of seedlings. There is already quite a difference in terms of growth rate and form between the best and worst clones, while all the clonal material is outgrowing the seedling stock.

Apart from the redwoods, the other star performer so far amongst the exotic trial species is Ovens cypress with two plots of different clones, one outperforming the other quite markedly. So far so good, and with no toppling to date, which must be a risk at these growth rates. Sad to say, the obvious loser amongst the exotic species here is Japanese larch. This is a favourite species in lowland Scottish forests as well as other parts of northern Europe and Japan, but really struggling here.

Much of what we saw in the exotic species trial plots will be nothing new to experienced farm foresters, many of whom will have ‘been there, done that’ with some or all of these species. But the beauty of Rewanui is that it is open to the public − the information is all there, it provides a really good introduction to exotic species choice for on-farm planting. Data from monitoring is also available on a website. Any landowner with limited knowledge of trees who visits these plots will see immediately how important it is to do their homework into choice of planting stock, rather than just taking whatever the nursery down the road is offering at a discount.

We walked on to the native species trials – some 14 species, namely black beech, black maire, kahikatea, kauri, kowhai, matai, miro, puriri, red beech, rewarewa, rimu, silver beech, tawa and totara. The plots of the native species are much more widely dispersed than the exotic species, but part of the purpose here is to compare survival and growth in different microhabitats. Some plots are in open grassland, some are in young regenerating scrub and others are under the canopy of older regenerating kanuka and other species.There are at least two contrasting plots of each species, and every tree is measured annually. Pictorial data is on display at all plots so people can get an idea of performance of the trees since they were established.

There are some marked differences within species between plots in different microhabitats, and between species overall. The most consistent performers so far are totara, matai, and black beech. Strugglers are some of the tawa and kauri, especially in open grassland sites. Again there was much to see and discuss, and a valuable introduction to the site-specific nature of native species.

A further project at Rewanui in the past three years has been a major Sustainable Farming Fund project to monitor biodiversity − birds, invertebrates, reptiles, native vegetation and soil − and look at the effects of pest control on native wildlife. This project, managed by Stuart Orme, forest manager at Rewanui, is drawing to a close, but has yielded a swag of useful practical and academic information about pest monitoring and control, wildlife monitoring, and the response of wildlife populations to pest control.

This winter, the NZ Dryland Forest Initiative will establish a ground-durable eucalypt breeding site at Rewanui. It will become another resource of considerable interest and value for local farm foresters and landowners.

Other local community groups benefit from Rewanui. It is used for sporting events such as orienteering and long-distance races, and local schools have been developing a wetland area. There is plenty of information for the public, and a welcoming entrance and car park to encourage anyone who wants to enjoy one of the many marked walks around native bush and the wider property.

Rewanui encapsulated the theme of the conference – land, trees and community. The visit provided us with a snapshot of what is a very ambitious series of long-term projects for the benefit of many people. The Montfort Trimble Foundation has a vision and this vision is being turned into reality, primarily thanks Ian Campbell and the forest manager Stuart Orme. The real challenge will be to sustain the work, including long-term monitoring of the trials, well into the future. If anyone can ensure this does happen, the team at Rewanui can.