On our way to the Homebush ground durable eucalypt trial we passed the earthworks of Masterton District Council’s land based sewerage system. This trial was set up on Stuart and Adrienne Forbes’ land in response to an application for a resource consent to border strip irrigate treated effluent on to land.

Stuart and some local ratepayers who called themselves ‘The Pooh Pond Group’ felt this would become unsustainable due to the repeated flooding of the soils. Knowing of Paul Millen’s research into ground durable timbers to replace treated pine posts in vineyards, they felt that a managed eucalypt coppice system producing ground durable posts whilst being irrigated with waste water would provide multiple benefits. They were able to persuade Sustainable Wairarapa Inc. in partnership with Wairarapa farm foresters, the Montfort Trimble Trust and Masterton District Council to fund the establishment of a two hectare trial of ground durable eucalypt species.

The trial consists of four provenances of Eucalyptus bosistoana namely Central coast, Cann River, Narooma, Nowa Nowa, two of E. quadrangulata Clouds Creek, Mt Skanzi, and one of E. cladocalyx. There are five of the 100 plant replicates of each provenance totalling 3,500 trees planted randomly throughout the two hectare trial block. The control 900 E. nitens are planted in a grid pattern and will identify any differences in tress due to site quality. Before planting, Stuart Forbes cleared, ploughed and levelled the site.

The trees were planted in late 2008 at spacings of one metre with three metres between rows. It was a hot, dry summer and the ground was dry and dusty but the block was irrigated so that the first year survival rate was 99 per cent. Frosts have killed the E. cladocalyx and the two year survival rate varies between 80 per cent and 93 per for the remaining species.

At just over two years, the tallest are nine metres high. Because of the close spacing they are growing tall and skinny. The E. quadrangulata are growing well but what the timber is like at the end of the trial is what counts. It is planned to take a roundwood crop in 10 to 12 years. Areas will be looked at for heart wood development and how suitable this is for post material and whether the sapwood can be given a benign treatment that would be acceptable to organic growers.

Annual measurements of plantings have been done and the main criteria are survival, growth rate, form, heartwood development, coppicing ability and frost tolerance. When discussion opened, some wondered whether this trial was the way to go in looking for ground durable timber. Points raised by attendees were −

At the end of the afternoon the reward offered was an opportunity to plant some native trees by the edges of the water on ground that had recently been sprayed to give the young trees a chance. There was a rush to grab a spade and a few seedlings and the planting began. It seemed to be no time at all before all the planting was carried out under the watchful eyes of those who were unlucky enough to have to stand by without a spade. 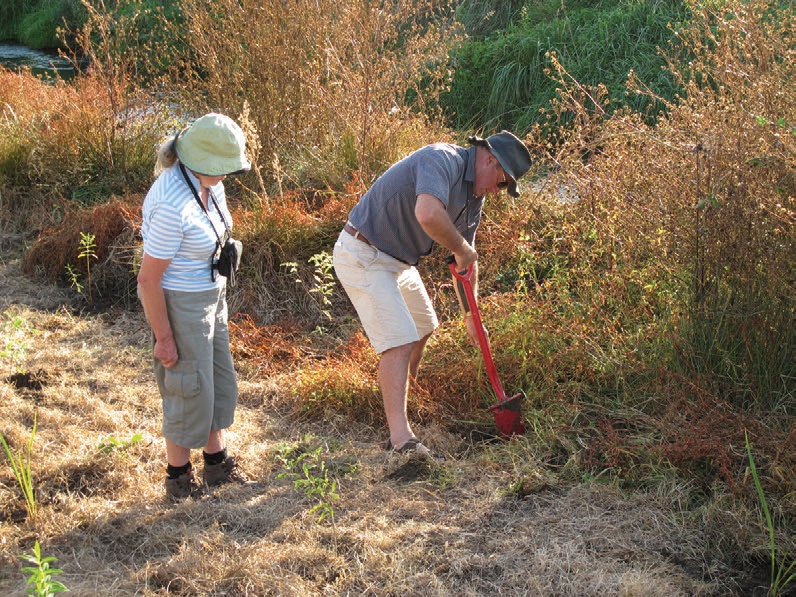