Coast redwood has been identified as a species with considerable potential for plantation forestry in New Zealand. An interim growth model has been developed which demonstrates the growth, yield and carbon sequestration potential on a range of sites. In addition, the coppicing ability of redwood has the additional benefit of erosion control on steep slopes.

Justifying investment decisions in redwood is not only dependent on reliable yield projections, but also on knowledge of wood quality and timber grade recovery. The main timber uses foreseen are those for which US redwood has a good reputation – exterior and interior joinery and weatherboards. The few studies completed on the wood properties and performance of New Zealand grown redwood indicate a large variation in timber grade recoveries and basic wood properties according to planting stock, siting, silviculture and rotation age.

There is an obvious requirement for predictive models of the effect of silviculture on timber grade recovery, to provide for management decisions. The establishment of a database on grade recoveries, timber properties and wood quality by a sawing study could be regarded as the front end of a complete data acquisition system. This could also be expanded in a consistent manner as more studies are carried out.

An application to carry out a sawing and wood quality study on pruned coast redwood from Mangatu forest was made to the FIDA market development initiative by Future Forest Research Ltd on behalf of the applicant group of over 10 companies, along with the NZFFA Sequoia Action Group. Interpine and Scion are working together as the key providers for the project.

Compartment 11 in Managatu forest was identified as possibly the only managed stand of redwood of a harvestable age in New Zealand of sufficient size to support such a study. The stand had been established at a very high stocking rate and had received two thinnings. Pruning appeared to have been relatively on time and therefore the final crop trees were assumed to be reasonably representative of the crop anticipated from current management practices. 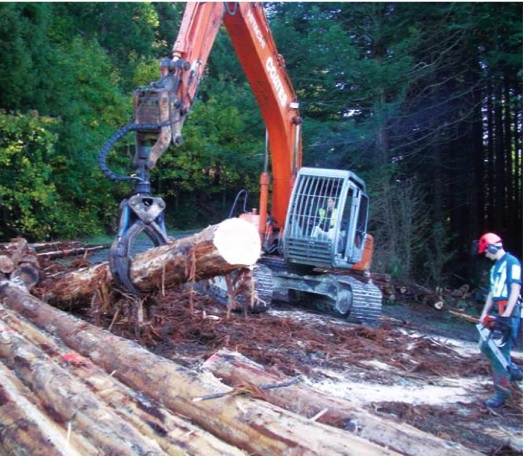 The successful application to FIDA and the provision of a sample from the stand by Ernslaw One has provided a unique opportunity to retrieve data on likely grade recovery from managed redwood stands.

The coppice of many of these thinned stumps still persist, awaiting their chance for access to the canopy when sufficient light becomes available. Current stand inventory indicates a stocking of 512 stems per hectare with a basal area of 107.6 square metres, an average diameter at breast height of 58.5 cm, a mean height of 32.8 metres and an average total stem volume of 2.5 cubic metres.

Mark Dean of Ernlsaw One, Hamish Marshall from Interpine and Paul Silcock from Scion headed to compartment 11 of Mangatu Forest in mid-April to select the trees for the study. A total of 15 trees were selected across the diameter range – from 36 to 81cm diameter at breast height.

The selection aimed to cover a sample of live green branches to the pruned height, small dead branches and large dead branches. Breast height increment core were collected from each stem for analysis of outer wood density distribution and earlywood to latewood density variation.

Two weeks later, 13 of the trees were felled, disks taken and skidded with an excavator. The lack of breakage in the upper stem resulted in more top logs being recovered than planned, reducing the sample size as there was a limit of only one truck load of logs. Over and under bark diameter measurements, taken at 1.4 metre and three metre intervals up the stem, will be used for validation of current volume, taper and bark thickness equations.  The 50 mm discs taken from the butt of each log recovered will be analysed to document –

The selective harvesting of the sample was carried out by Daniel Herries from Interpine. Damage to the remaining crop trees was minimal, apart from one case where the damaged tree was felled and included in the sample.  Damage to the surface roots of the crop trees by the excavator during extraction was a concern, potentially minimised in the future by using lower impact, wheeled machinery.

The installation of a permanent sample plot will record the growth response to the partial harvest and ensure any health issues arising from any damage to stems/surface roots on the residual crop will be monitored. Bark removal was tackled as soon as possible due to anecdotal evidence indicating it being a problem in winter if left for even a night.  The back of the excavator shovel was used to bruise the bark off, taking significant time and needing a lot of patience from the operator.

Surprisingly the thicker bark on lower stems came off the easiest, whilst the thinner bark on upper logs was held on by branch stubs and proved more difficult to remove without damaging the outerwood. After a bit of shovel work by the Interpine crew it was concluded that a static de-limber would prove to speed the process up. Trees were bucked to pruned butts and five metre logs giving a total of 49 logs which were transported to Rotorua for milling.

In the yard the three-dimensional log profiles for each log were measured using a manual equivalent to twin axis scanning. Additional measurements were taken on each log for –

The logs were then sawn according to the prescribed sawing pattern.  In general the pruned logs were sawn to 24 mm boards until the first defects were determined. After this the knotty centres of those logs were cut to construction sizes 45 mm or thicker.  For the unpruned log the sapwood was removed by cutting 24 mm boards after which 45 mm boards were cut.  The widest boards possible were cut from the heartwood.  The logs were cut out at 59% conversion, giving 14 cubic metres of timber. These were then transported to Scion where the following timber grading and board measurements were carried out – 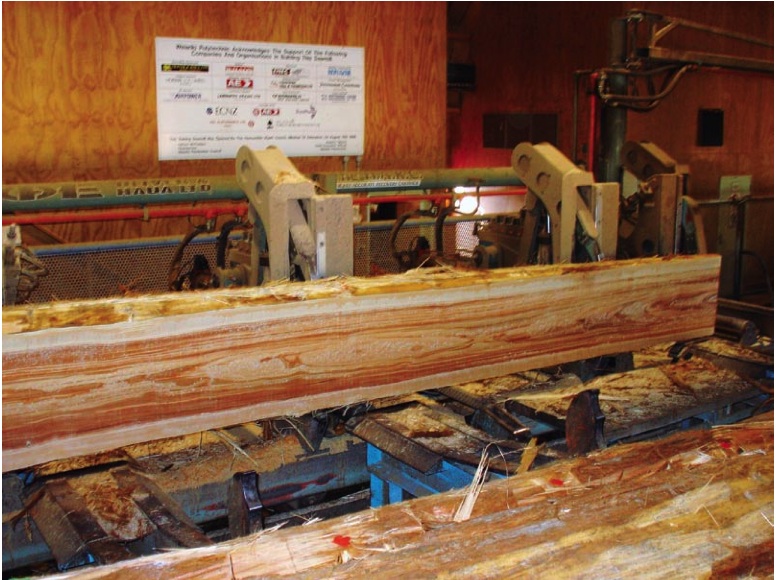 At time of writing this stage has just been completed. The timber will be air-dried for two months before final kiln drying and sorting for sale to the Californian market.  At this stage, 20 sample stakes will be taken from the lumber of each butt log to be installed in a graveyard durability trial. Additional samples have been taken from the discs and stored for future work with cellar block and durability testing when suitable funding becomes available. It is hoped solid relationships between the three durability tests could lead to improved methods with rapid turnaround time for the assessment of durability.

Areas of insect damage found in some of the upper logs, where dead branches have provided access to the heartwood, have been identified as the New Zealand drywood termite, Kalotermes brouni. There is also evidence of the native huhu beetle.  Associated with these areas of beetle damage, rot has been found spreading from the dead branch stubs throughout the heartwood.

Samples of this rot are currently being analysed to identify the various types of fungi at work. These findings have implications for future silviculture and reflect the high initial stocking of the stand and delayed first thinning. They emphasise the need to maintain a deep green crown through timely thinning and the possibility of second log pruning.

After the data has been processed the results are expected to include a definition of all relevant sawmill variables, the mill conversion standard and summaries of measured variables, grade and value recovered per log. The newly created database on measured log variables, conversion and lumber grade recoveries per log will be described in the report and published.