In tune with their landscape : South Island Husqvarna Farm Forester of the Year

Chris and Julia Dawkins, were presented with the award at this year’s annual conference in Christchurch. They are very worthy recipients having been actively involved for a considerable time in the NZFFA, their community, and the wider agricultural scene. They farm a very attractive, well planted, 415 hectare farm in the Waihopai Valley west of Blenheim. It is Chris’s family home farm which he and Julia purchased in 1978. 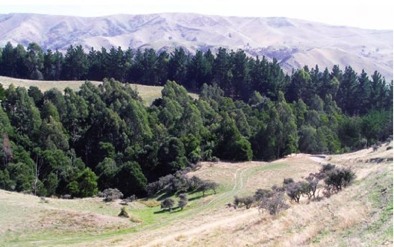 They are a rare breed, still farming sheep and growing trees in an area where grapes are increasingly taking over the landscape. The Dawkins are very much a couple in tune with their landscape while enjoying growing trees.

They joined the Marlborough farm forestry branch in 1978 with Chris serving as President, as well as secretary-treasurer, and he has been newsletter editor for more than the past 10 years. Chris has written articles for the local newspapers and is also a member of the New Zealand sheep council. Julia is a school teacher and takes an active part in the farm when she can.

The property is called the pyramid so named because of the very prominent conical shaped hill in the middle of the farm, and is made up of stony river flats and heavy clay downs. The rainfall on average is 785 mm, but summer drought is an problem.

The Dawkins run a corriedale breeding flock, as well as bull beef, with some leased out to dairy farmers as sire bulls. They have 62 hectares of well managed woodlots and 10 km of shelter belts.

Chris’s exploits at growing trees covers the whole gambit of farm forestry practices. He has always been a keen advocate for planting the highest quality material he could get. Many of the radiata stands have been from material he has grown in the home garden from cuttings. He has then planted these, and carried out most of the silviculture work himself.

Chris experimented with group plantings with three or four in a group and then removing some. This had varying success. With fast growth on highly fertile sites wind blow has been a problem. Many trees have been straightened and tied back over the years.

Shelterbelts have been planted over the years to slow the strong northwest wind. Radiata has performed well and a number of eucalypt species have also been used. One of these belts incorporates an old Forest Service spacing trial set up by Patrick Milne.

Along the small but picturesque Avon River, they have applied a covenant to a three kilometre stretch of the river which forms the north-west boundary of the property. This contains eight hectares of regenerating native bush. The river is in a deep ravine and as such was a hazard and nuisance to the farming operation, before being set aside and let the vegetation revert back to what the area once was.

Dudley Franklin has dubbed this area the canker capital of New Zealand. Much to the Dawkins’ disappointment canker has decimated several woodlots and shelterbelts of macrocarpa as well as Leighton green Leyland cypress. At present a stand of nine-year-old ferndown cultivar of Leyland’s appear to be untouched by canker.

Around every corner on the property there is woodlot of a different species. There are two very attractive groupings of cork oak. A further patch of oaks planted near the creek were planted from acorns that the children had gathered in the Blenheim gardens. To Chris’s surprise the acorns established into trees with very few blank patches. Another species doing reasonably well is black walnut in a 13-year-old stand, again planted near the creek and on a terrace above.

Poplars have been planted around the farm for fodder, shade, amenity, and erosion control. A honey locust stand was established from seed pods collected at the 1989 Gisborne conference. These have established and are growing well. Although pod production is variable, Chris only discovered later that this species has male and female trees.

Like all farm foresters the Dawkins have had their failures. Two mixed stands of Eucalyptus obliqua and Acacia melanoxylon have produced variable form but provide a picturesque backdrop to parts of the farm.

In 2007 the Dawkins had the pleasure of harvesting a five hectare woodlot of radiata planted by Chris and his father in1968. This area yielded 3000 tonnes of logs with 65 per cent going into premium grades and the pruned butts for high quality veneers.

The area consisted of a low producing, gorse prone, steep face and terrace near the river. The gravelly soil produced slow growth but very good tree form. This was a pleasing result especially from land that would not have produced much in livestock return over that time. It was an excellent example of the farm forestry model in action in Marlborough. 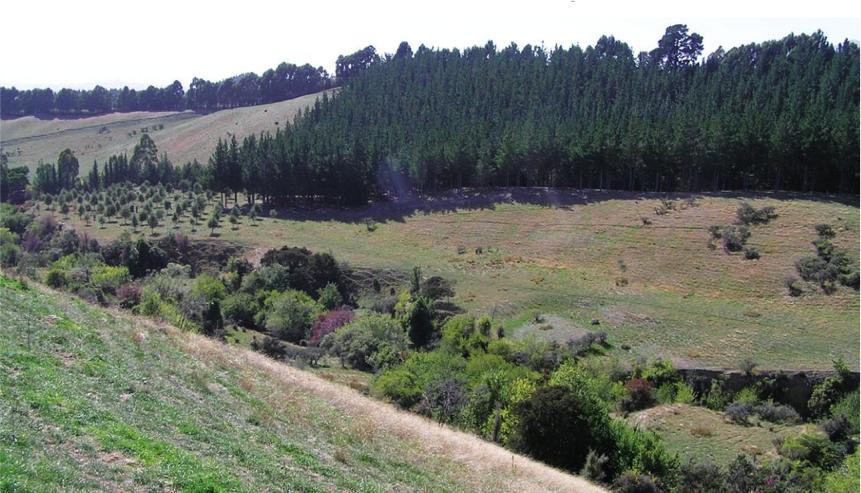