Plantings of blackwood have been made in Westland since the mid 1960s. Initially they were undertaken as trial, enrichment or amenity plantings, much of which were carried out by FRI. Dudley Franklin was a leading light in this area. Blackwood was also grown in the Forest Service nursery at Totara Flat in small numbers for amenity purposes, and because some forestry people liked planting all sorts of different species in all sorts of places just to see how they performed.

History of blackwood in Westland

Commercial scale planting of blackwood was started by the Forest Service in 1981. This was the result of a political promise made to the people of South Westland. In exchange for transferring Waikukupa and South Okarito State Forests into Westland National Park, it was promised that a special purpose species estate of up to 10,000 hectares would be developed in the region. The primary species chosen was blackwood. At the time it was considered that blackwood was the most suitable species for the area and would be an appropriate substitute for rimu.

Many of the sites that would be suitable for blackwood are no longer available because under the Forest Accord these areas are now classified as regenerating indigenous forest and will not be converted to exotic plantation. 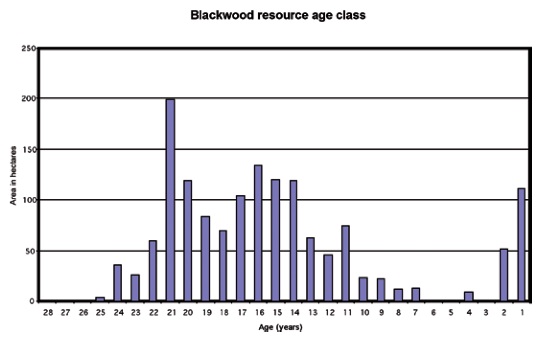 Timberlands West Coast  has about 1500 hectares of blackwood, ranging in age from one to 28 years. Best results have been obtained where fertility is moderate to good, drainage is not severely impeded and good side shade is retained between the rows after site preparation.

Planting was originally carried out in line cut and line bulldozed indigenous cutover as well as on some fully cleared and  V-ploughed sites. Today, line cutting as a means of land preparation has been discontinued, partly because it is too costly at over $1200 a hectare, and partly because of manpower constraints.

All preparation is now done by line bulldozing to clear lanes for V-ploughing. Blackwood is only planted in the areas where there is a reasonable amount of side shade still remaining between the lanes, cypress is planted in the bulk of the areas.

Blackwood is a hard species for a radiata psyche to come to terms with. It has little apical dominance and will form a large branched crown at the first opportunity on as short a stem as possible. The hardwood regrowth on cutover sites in Westland does not grow fast enough to force blackwood up and form a good sawlog naturally unless the regrowth is already six to eight metres high at planting. As a consequence form pruning is needed on most sites. On relatively open sites, form pruning is imperative if any sort of a decent sawlog is to be produced.

Many of the early plantings of blackwood in Westland have suffered as a consequence of not being form pruned or only having an initial form prune. Unlike radiata or cypress there is no fallback option of leaving blackwood unpruned. If you form and stem prune blackwood on suitable sites you will get a good sawlog but if not most of what you grow will be firewood.

Disillusionment with the performance of the species started to set in about 1993, and the decision was made to switch the special purpose species programme to cypress.  Blackwood retained a minor role of only up to 10 hectares a year of new planting on suitable sites.

The reasons for the disillusionment were the very poor form as a consequence of the damage being caused by the leafminer caterpillar Acrocercops alysidota, and the open nature of the sites on which blackwood was being planted.

However, enthusiasm for blackwood has been rekindled after the arrival of two species of parasitic wasp that very quickly controlled the leaf miner caterpillar. This enthusiasm was further fanned by the results of a small sawing trial carried out.

From a roundwood volume of 2.83 cubic metres, a sawn volume of 1.41 cubic metres was produced. Grade recovery was excellent with 64% being dressing grade, 31% select appearance and 5% standard.

The foreigner in the planting bag

In 2003 Timberlands West Coast moved office and two new tables were needed. The decision was made to make them out of locally grown blackwood if suitable logs could be found. According to longtime forestry manager Mike Craw, a bundle of Eucalyptus delegatensis arrived from Totara Flat nursery to be planted at the junction of Westbrook Road and Camerons Road.  Amongst this bundle of eucalypts was a foreigner.

This foreigner bounced around in a planting bag until everything else was planted and the planters deciding that as it was a tree they might as well plant it. After 32 years of benign neglect this tree produced a 10-metre sawlog with a diameter at breast height of 80 centimetres. Several 26-year-old trees grown on a very hard site were also felled, and together they provided the sawn material for two large tables. The large tree was easy to saw and very stable, whereas the trees grown on the hard site were more difficult. In the words of the sawmiller ‘like trying to cut iron bars’. The logs were cut into 50 mm stock with a conversion of about 58%. After drying, the timber was made into two tables by a local cabinetmaker Eric Palmer of Westland Wood Turning. One of the interesting things that we discovered in this exercise was that there are very few defects in the timber. Most defects can in fact be classified as features.

What markets for blackwood?

It will be six years before a continuous supply of material will become available to the market. However small lots may become available earlier and this material should give Timberlands West Coast the opportunity to develop a small niche market ahead of the main supply.

My view is that blackwood will have three separate markets –

What have we learnt from our experiences with blackwood so far? To be choosey about where blackwood is planted. Broadscale plantings are not the way to go. To prune it. There will be plenty of feature wood above the pruned stem. To recognise that what we, as tree grower, consider to be defects are not always considered as such by the end-user.

Do we want to continue with blackwood? Very definitely.