If you live anywhere near Reporoa there is a family there you need to know. Ben Lee, wife Silvia, along with Hamish, Harriet, Sam and Georgia live and play on a 187-hectare dairy farm, milking 300 cows.

They also have lots of trees.
If you want to know some of the details –

At 540 metres above sea level, plenty of cold southerlies coming off Ruapehu and dry westerly winds in summer, shelter is essential. And they now have plenty of shelter.

Ben’s father Allan and mother Dorothy took over what used to be a Lands and Survey farm in 1963. The total area then was 156 hectares with only a few wilding pines growing on some of the 12 paddocks. The erosion prone gullies were planted first, mainly with western white pine, Pinus monticola, Douglas fir, redwood, poplar and willow.

Shelterbelts running north-south are predominantly eucalyptus under-planted with Himalayan cedar and oaks making a triple combination. The east-west shelter belts single rowed alternative high pruned pine and poplar allowing plenty of light on shaded side. I have only glossed over these shelter plantings. Time did not allow us to study these in detail but the variety of tree species is numerous and grid pattern impressive.

Our first stop was lunch in a 2.8 hectare agroforestry block planted in 1990. These trees at 74 stems per hectare and pruned by Ben with the help of a contractor at final pruning to eight metres, looked like tall umbrellas outside a cafe. Returns from the pruned log will be good but the rest of the tree is mainly pulp.

An assessment has shown a mean diameter at breast height of 46.6 cm and a mean top height of 20 metres.

Assuming the paddock had 11 livestock units per hectare before planting, the trees and grazing have returned $54.5 per livestock unit. 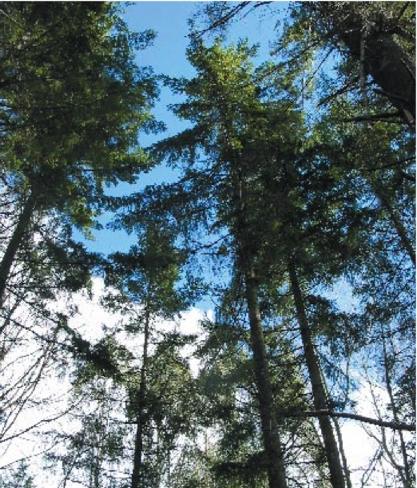 Understorey grazing yields are estimated to be 31% of that achieved without trees. The value of all the logs estimated to be produced at 30 years, based on the average log prices over the past three years, will be $25,000 per hectare.

Ben concluded it was better to have stocking higher and forget trying to graze as well. But it is really good that someone has tried hard with agroforestry.

Next we walked to a shallow gully planted in 1964 with Japanese cedar, Douglas fir, western white pine and sitka spruce. Thinnings from Douglas fir and white pine have been used for cattle yard posts and timber. After cartage and treatment it all works out about half normal cost.

Leith Knowles gave a talk here on the Douglas fir. His calculations show a poor growth here mainly because of the seed source. If Californian seed had been used it may have doubled production. A sample plot was set up in 2005 in an area of mainly Douglas fir which gave a stocking rate of 300 stems per hectare and a mean top height of 29 metres.

The 1990s were a busy time for the Lee family because sheep and deer were replaced with dairy cows, and in 1996 the purchase of 31 hectares of neighbouring land for forest plantings. A total of 11,000 trees have ben planted on this southwest slope. Pines have been pruned to 6.7 metres and stocked at 367 stems per hectare at the north and south sides of this face. A sample plot has shown that if the stand grows to 30 years, 780 cubic metres a hectare should be harvested.