Forest establishment is a critical phase of the forestry cycle, and success at this stage sets the scene for the whole of the rotation. The survival and growth of nursery seedlings in plantations is greatly improved by the presence of mycorrhizal fungi both in the nursery stage and when planting out.

Mycorrhizae are fungal species that live in symbiosis with tree roots and play an important role in supplying soil nutrients to trees as they grow. The term mycorrhiza stems from the Greek terms mykes and rhiza, literally meaning fungus-root. These organisms form a linkage between plant roots and the soil by transferring inorganic nutrients to the plant in exchange for carbon. In this two-way movement of nutrients , up to 20% of plant assimilated carbon, can be transferred to the fungus.

The benefits for the plant are increased growth and yield, and improved fitness. Such is the inherent value of the partnership that 82% of land plants are mycorrhizal, and nutrient deficiencies will result if the fungal partner is not present. 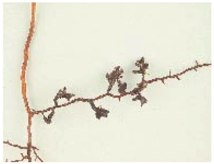 There are seven types of mycorrhiza – ectomycorrhiza being the common type for radiata pine. Ectomycorrhizal fungi, which can be seen with the naked eye, protect the trees against disease by imposing a physical barrier against pathogens. They can also produce protective antibiotics and promote beneficial bacteria, which may be directly responsible for guarding against root pathogens.

Those who aim for good seedling quality do well to consider the role of mycorrhizae. Lack of mycorrhizal fungi on root systems is a leading cause of poor plant establishment and growth in the forest. When purchasing tree stocks of radiata pine and Douglas fir, look for the white and brown fungal growths on the roots. They indicate a healthy population of beneficial ectomycorrhiza.

Good forest tree nursery practice and compatible inoculation programmes can ensure that seedling roots are colonised by mycorrhizal fungi, resulting in improved growth after planting. It is not only important to have mycorrhizal fungi present in the nursery and plantation. The selection of the appropriate species is a key point in every inoculation programme. Sensible manipulation and conditioning in the nursery are important factors influencing the survival rate of a tree.

A common practice in New Zealand nurseries is to inoculate with soil or duff inoculum, sporocarps or spores. Established nurseries often do not inoculate at all, relying on natural soil populations, and inoculum material is usually collected from these sites. When considering controlled inoculations, the choice of fungus should be based on its position within mycorrhizal succession, its ability to stimulate the growth of the host and by the persistence of the association.

Each component of the tripartite system of host/mycorrhizal fungus/other soil microbes is subject to environmental influences. The soil environment influences symbiosis, and mycorrhizal health is affected by pH and soil fertility. Too much fertilisation is known to reduce the abundance and presence of mycorrhiza. As trees grow and mature, it is believed that the associated mycorrhizal populations change. A study is underway by Ensis scientists to understand the nature of mycorrhizal succession and to identify indicator species at the investigated stages.

Over the past year, samples were collected from nursery sites, and plots established within stands of trees aged from one year to the end of rotation. Once this study is complete, information on beneficial mycorrhizal species may enable inoculations that will enhance tree growth.

Katrin Walbert is a PhD student from Germany, currently working at Ensis Forest Biosecurity and Protection in Rotorua. The mycorrhizae research at Ensis is being conducted using FRST funding, and part of the funding is being used to support Katrin’s PhD project with Lincoln University.