Crown lightening to reduce the risk of tree topple

Juvenile instability or ‘toppling’, is the leaning of young trees (2 to 3 years old) due to failure of root anchorage. It is particularly likely to occur on heavy soils, especially after heavy rain. Trees affected by topple are often not uprooted, but continue to grow, resulting in sweep and stem sinuosity as the tree struggles back to the vertical.

Toppling has serious economic implications for forest and woodlot growers throughout New Zealand. It results in more stems having butt sweep and increased quantities of compression wood, so reducing potential volume recovery of valuable clearwood. Loss of trees due to topple also reduces selection ratios at time of thinning, reducing the possibility of achieving an acceptable final crop stocking. A further cost is the increased susceptibility of older trees to windthrow due to poor root architecture.

Crown lightening, reducing a tree’s ‘sail area’ by shortening the branches of rising 2 year old trees, is one method of possibly reducing the incidence of toppling. While the application of crown lightening is becoming increasinglym common, the name used to describe the technique, and the method of application are extremely varied.

Ian Barton in the November 1995 New Zealand Tree Grower documented results of a trial in which three levels of crown lightening were applied to Cupressus spp. This trial found that sail pruning had no effect on height increment. Toppling was identified only in the C.lusitanica control and ‘even prune’ trees. An ‘even prune’ involved removing every third branch starting from the top.

Jeff Tombleson, and James Turner of Forest Research have installed a number of trials in 2 year old radiata pine seedlings evaluating a crown lightening technique which aims to remove approximately one third of the crown area, by shortening of all branches to form a cylinder.

Geoff and Gill Brann have applied crown lightening to two year old radiata pine seedlings growing on fertile farm sites which experience exceptional growth rates. Their crown lightening operation involves tip pruning all branches to remove at least 50% of foliage, and cost 15 to 20 cents/tree. They began ‘sail pruning’ 15 to 20 years ago. One problem they have experienced has been the increased number of epicormic shoots which add an extra cost at first pruning.

City Forests Ltd in Dunedin, have been applying crown lightening on 2 to 3 year old radiata pine seedlings grown on ex-farm sites. The combined form pruning and crown lightening operation involves removal of multiple leaders, and shortening branches where possible to 30 to 50cm. This treatment costs approx. 20 cents/tree. The crown lightening component of the treatment which was used on 300ha over the last 2 years was considered of limited value given the cost of treatment and the levels of topple experienced in treated stands.

The Tree People Ltd have been using a crown lightening technique termed ‘windproofing’ for several years. Their treatment involves shortening the branches in whorls above half the tree height in two year old trees. Each branch is shortened to half the mean length of the branches in the whorl. Any branches in the lower half of the tree that extend into the top half of the tree are cut at half height. The treatment aims to reduce the sail area at the point of greatest leverage on the tree during the critical period of susceptibility through the following winter. Shortening, rather than removing branches, allows them to continue to grow and also shade the stem to minimise epicormic growth.

Results indicated that this treatment helped reduce the incidence of topple, but the effect on growth and form was unknown.

To test this, a trial was established 30km west of Whangarei on a fertile farm site. The soil is a clay loam and is in good quality pasture of rye grass, brown top and paspalum with some scattered patches of blackberry. GF17 bare-rooted seedlings were established in August 1994 at 800 stems/ha using a 2-cut planting method ensuring the roots were not distorted at the time of planting. Trees were release sprayed with Galant and Gardoprim in September 1994.

Crown lightening was carried out over part of the area on 20 June when the trees were rising two years old. Two days later an easterly storm with winds gusting up to 95km/hr resulted in considerable toppling within the trial area, providing an opportunity to evaluate the effectiveness of the crown lightening treatment.

Percentage incidence and degree of topple 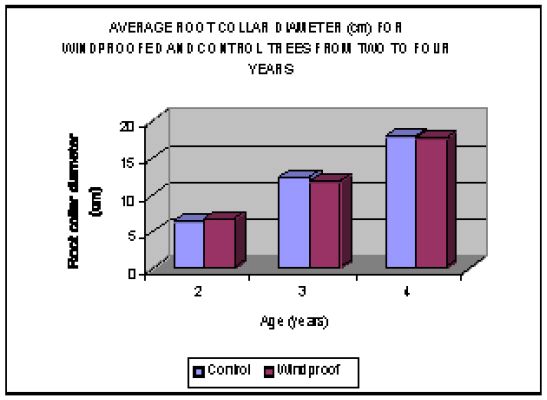 Topple and lean. There is a significant difference in incidence between the control and wind-proofed treatments. None of the wind-proofed trees toppled, but 50% of the untreated trees had an average lean of 30º.

Straightness. Trees that toppled continued to grow, but their stems curved as they struggled back to the vertical, giving them the appearance of hockey sticks. Topple in the untreated trees resulted in significantly poor stem straightness: a deviation of 9.5mm/m compared with 2.4mm/m in the treated trees.

Sweep. Two years after treatment none of the treated trees had sweep of more than 10mm/m, but 20% of the untreated trees did.

Toppling is a random event, dependant on the likelihood of a given site being subject to a wind storm and the perceived toppleproneness of a site. Although crown lightening is a useful method of reducing the incidence of topple, its adoption by growers will depend upon the level of risk they are willing to accept.

Radiata pine seedlings are most prone to topple during their second or third winter. Crown lightening needs to be applied in the autumn prior to this critical period. The relatively low cost (10 to 20 cents/tree) in comparison to the potentially high cost of toppling, suggests that crown lightening can be a cost-effective operation for forest owners who want to reduce the incidence of topple and subsequent stem sinuosity and sweep on topple-prone sites.

This article by Peter Davies-Colley of The Tree People Ltd, and James Turner of Forest Research, appeared with photographs and tables in the November 1999 issue of the New Zealand Tree Grower.