While a number of eucalypts are adapted to growing in cool climates, the best timbers are generally produced by species favouring warm sites such as can be found in northern New Zealand and on north-facing slopes in the northern half of the South Island. Most are somewhat sensitive to frost, particularly as seedlings, but note that frost susceptibility depends on their physiological state – semi-dormant seedlings conditioned to drought or starved of nitrogen are much hardier than actively growing seedlings.

This group produce a light brown timber that is easy to saw and season, and which is hard, strong, stable, and ground durable. Although best suited to free draining, lower fertility soils, they will tolerate winter-wet clays e.g. in Northland. Growth rates vary with species and provenance, but are generally slower than the faster growing ash eucalypts. Few suffer from serious insect problems, and four species are currently recommended:

E. pilularis (blackbutt) comes from the coastal forests of NSW where it grows to huge size. Seedlings do not tolerate frosting but trees will stand moderate exposure to salt winds. Form is quite variable and rather poor in some provenances, but to date the Waipoua seedlot seems to have performed best in New Zealand.

E. muelleriana (yellow stringybark) is a medium to large tree from southeast NSW and eastern Victoria. Probably the best milling eucalypt of all. Generally a vigorous tree of variable form prone to double leaders. Rather frost tender but there has been limited provenance selection to date.

E. globoidea (white stringybark) is a smaller tree, commonly regarded as a slower growing species for harder sites, but provenances vary considerably. Seedlots tracing back to Glenbervie (Northland) are preferred.

E. laevopinea (silvertop stringybark) is a tall forest tree from the cooler northern tablelands of NSW. Not common in NZ, but tolerates colder sites. A good milling species of good form and vigour.

This group produces hard, strong, durable timbers attractively coloured pink or red. While the timber is easy to dry, the species often suffer extreme growth stresses making them difficult to saw. Logs greater than 70cm diameter are preferred. The major problem with this group is the succession of insect pests that have arrived in recent years, and until these are under biological control, the species cannot really be recommended.

E. botryoides (Southern Mahogany) occurs both as a poor-form coastal species and as a tall forest species, so provenance is very important. It is tolerant of salt winds and wet sites (not swamps) but tends to be heavily branched and suffer crown breakage on windy sites.

E. saligna (Sydney blue gum) is a tall tree from the eastern strip of NSW and southern Queensland. Generally of good form, it requires reasonably fertile soils, but does not tolerate salt winds and can suffer crown breakage on exposed sites. Neil Barr used to emphasise the desirability of provenances with interlocked wavy grain. These are more stable, but opinions on relative merits vary.

E. grandis (Flooded gum) is similar to E. saligna and often confused with it in Northland.

E. robusta (Swamp mahogany) is a smaller, poorer form tree, rare in NZ, but it has the merit of growing in swamps.

Amongst the myriad of other possible timber species, two are notable:

E. maculata (Spotted gum, also known as Corymbia maculata) is a good milling species for warmer sites on a range of moderate to good soil types. Suffers from some insect problems.

E. microcorys (Tallow wood) is a slower growing species for warmer frost-free sites on a variety of soils.

Has grown well on coastal sands as far south as the Manawatu. An attractive tree with few insect or disease problems. Extremely durable timber, regarded as the best hardwood of eastern Australia.

Natural durability in the ground

Only mature heartwood is durable, and even then, durability is variable between and even within trees. Note that the most durable timbers are very heavy, and difficult to staple when dry.

All these species are best established in the spring (Sept-Oct.) using Rootrainer® seedlings 20-30cm tall. A high-nitrogen fertiliser, applied either as a slow release tablet or as loose fertiliser in a slit 15-20cm from the seedling assists in rapid establishment. Eucalypts are sensitive to many chemicals used for releasing, but Gallant, Gardoprim and Versatil have all been used successfully. Avoid spraying the foliage as much as possible.

Planting alternate rows with a radiata pine nurse is cheaper than planting pure eucalypts and works well at total stockings of 1000 to 1200sph. Faster growing eucalypts (most species on favoured sites) should be planted a year behind the pines, but severely prune and then remove the pines before they dominate the eucalypts.

Most eucalypts will shed their smaller branches naturally, but annual pruning from age 2 to 3 is recommended. Start by removing double leaders and any branches over 4cm diameter, and prune in the driest part of the year (mid-late summer).

Thinning is critical and should be done progressively as crowns touch until the trees are 12 to 15m high and pruned to 6m. Thinning can then be to a final crop stocking of no more than 100 to 200sph depending on species and site.

A simplified structured regime is as follows:

On good sites, trees may get to 70cm dbh and be millable by age 30, but it is probably better to grow them on to 40 years and to bigger diameters. 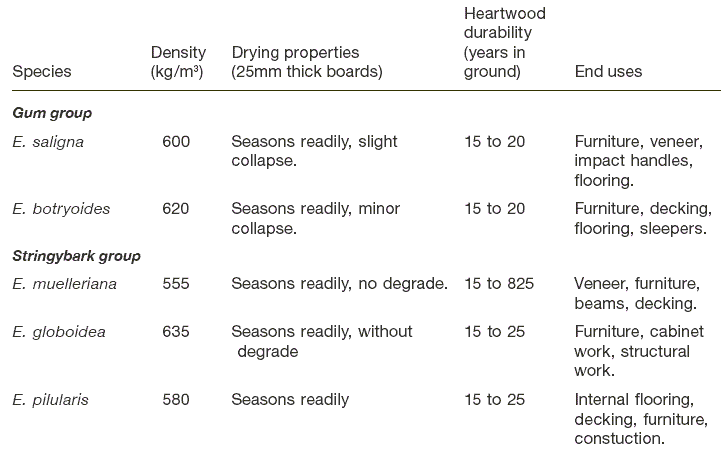 Every locality is different, and there is no substitute for local experience, so make use of the knowledge of your local farm forestry members. For more detailed information, see Neil Barr’s book Growing eucalypts for milling, available from NZFFA.