Don Tantrum planted and mapped several cypress trials on a range of sites on his farm near Taihape from 1990 to 2000, beavering promising material from around New Zealand and planted this in his arboretum for later assessment. The intention was to make selections that improve the germplasm available to growers.

Many thanks to the Neil Barr Farm Forestry Foundation for funding this study, and to Don Tantrum for facilitating this research and for his assistance with maps and other information.

This report summarises a 2020 assessment of Don's trials. This was undertaken in March 2020 by myself and Angus Gordon and made possible with funding from the Neil Barr Farm Forestry Foundation.

The most striking feature of Dons collection is the irrefutable visual evidence of the promise that cypress holds for growers. This evidence exhibits as growth, form and health, but what is also clear is that it's all about genetics. Don's collection realises that promise and now its time to hand this over to the next generation of growers.

Trees were assessed and both seeds and cuttings were collected from the most promising selections.

Outcomes from this research also include:

Cypress has been grown and harvested in New Zealand on farms for well over 100 years. Unfortunately, because disease-susceptible seedlines and clones have been planted extensively and for the last three decades, the catastrophic failure of these has left the reputation of the species in tatters. Most growers have become reluctant to plant macrocarpa again after experiencing complete crop failure, in contrast to those few who had good results from planting their own seedlines from good local trees. Canker-susceptible seedlines such as Strathallen and Longwoods along with clones such as Kukupa and the Leylands continue to plague growers only because nurseries unwittingly propagate them and haven't been offered alternatives.

Clonal selection offers an opportunity for rapid deployment of improved cutting-grown cultivars. This is nothing new. However, the breakthrough for cypress breeding has been simply accepting that cypress cultivars should only be evaluated once they mature, at around twenty years old. Only at this age can selections be made based on low levels of fluting, mature branch architecture, resilience to stem breakages and toppling, along with wood stiffness, heartwood colour and heartwood content.

The Cypress Development Group have responded with a strategy of searching for superior seedling-grown mature trees and cloning these. Some of these will grow well from cuttings regardless of "maturation", the death knell for clonal propagation of other species such as radiata pine and larch. The Leyland cypress clones are an example where these have been propagated for over 100 years without maturation retarding growth rates, suggesting that unlike radiata pine, cypress does not suffer from physiological aging. That is, juvenility is not a prequisite for a good cypress clone.

What we're also beginning to observe is that a good cypress tree must not only have resilience to environmental challenges such as wind and disease, but also have a fine-branched architecture with narrow-conical form. The other critical selection criterion is wood quality. Wood properties such as durability, stiffness, wood colour and heartwood content can all be tested for in mature trees.

What we found in Don's trials was that some clones and seedlines had consistently higher heartwood content regardless of site. Heartwood content narrows our initial selections, along with which clones propagate well. Then other wood properties can be tested for once these pass.

We took cutting material from twenty-nine macrocarpa and lusitanica selections, which Patrick Milne of Southern Cypresses is propagating. From there, stool beds will be set up to overcome plagiotrophy and to provide material to nurseries. It will, however, take a few years to ramp up production of our best selections for deployment at scale. We have started with Don Tantrum's trials because these are well documented, carefully selected from around New Zealand and are at a good age for evaluating.

This report records our evaluations of Don's trees for form, growth rates, heartwood content and health. The results are presented below. The focus was on four blocks (A, B, C and D). It is hoped we can come back at a later date and measure more of Don's trial blocks. 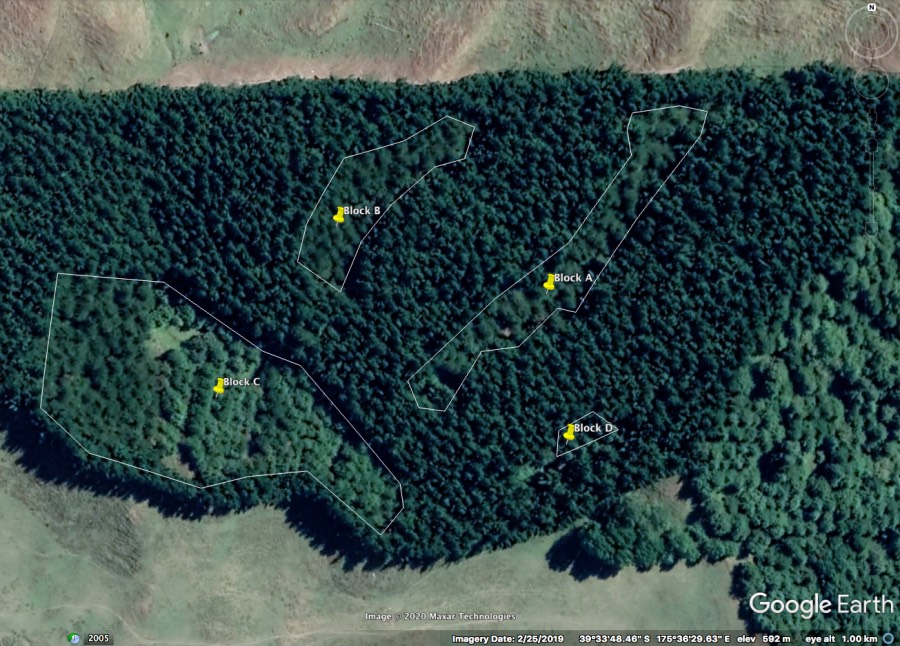 Heartwood content was measured from stumps where trees were thinned a number of years ago, not from the standing tree. The heartwood percentage was quantified as heartwood diameter / total diameter.

Block C included row plots of both seedling varieties and clones. Unfortunately Don did not always specify whether the plot was seedling or clonal, complicating the assessment (with clonal field trials genotype is a constant instead of a variable). Only promising cultivars were measured:

*Heartwood content averaged across thinned stumps of the cultivar

The best tree in each row was climbed and cutting material taken. Seed was also collected if available.

Brief descriptions of cultivars in Block C not measured:

**one tree (selection) measured.
*Heartwood content averaged across thinned stumps of the cultivar

Brief descriptions of cultivars in Block A not measured:

*Heartwood content averaged across thinned stumps of the cultivar

Brief descriptions of cultivars in Block D not measured:

Barr hybrid #2 was planted here, two rows. These were extremely well formed trees that had grown consistently well and appeared to be high quality selections suitable for deployment. However, we measured seven stumps for heartwood and not one of these had any heartwood. This is an important result, clearly demonstrating that heartwood development is associated with individual clone. High heartwood content should be a measured selection criterion.

The results from this trial clearly demonstrate that good cultivars produce valuable crop trees. The scores for Don's selections are consistently much higher than those from the FRI trials planted at the same time, as reported previously by Satchell (2017). Selections have been made, cuttings have been taken and these will be grown for wider deployment. This is the first stage of a nationwide survey and genetic material collection being undertaken by the Cypress Development Group. Please contact the secretary for more information.

CDG members can access the records for cuttings taken from these trees here. 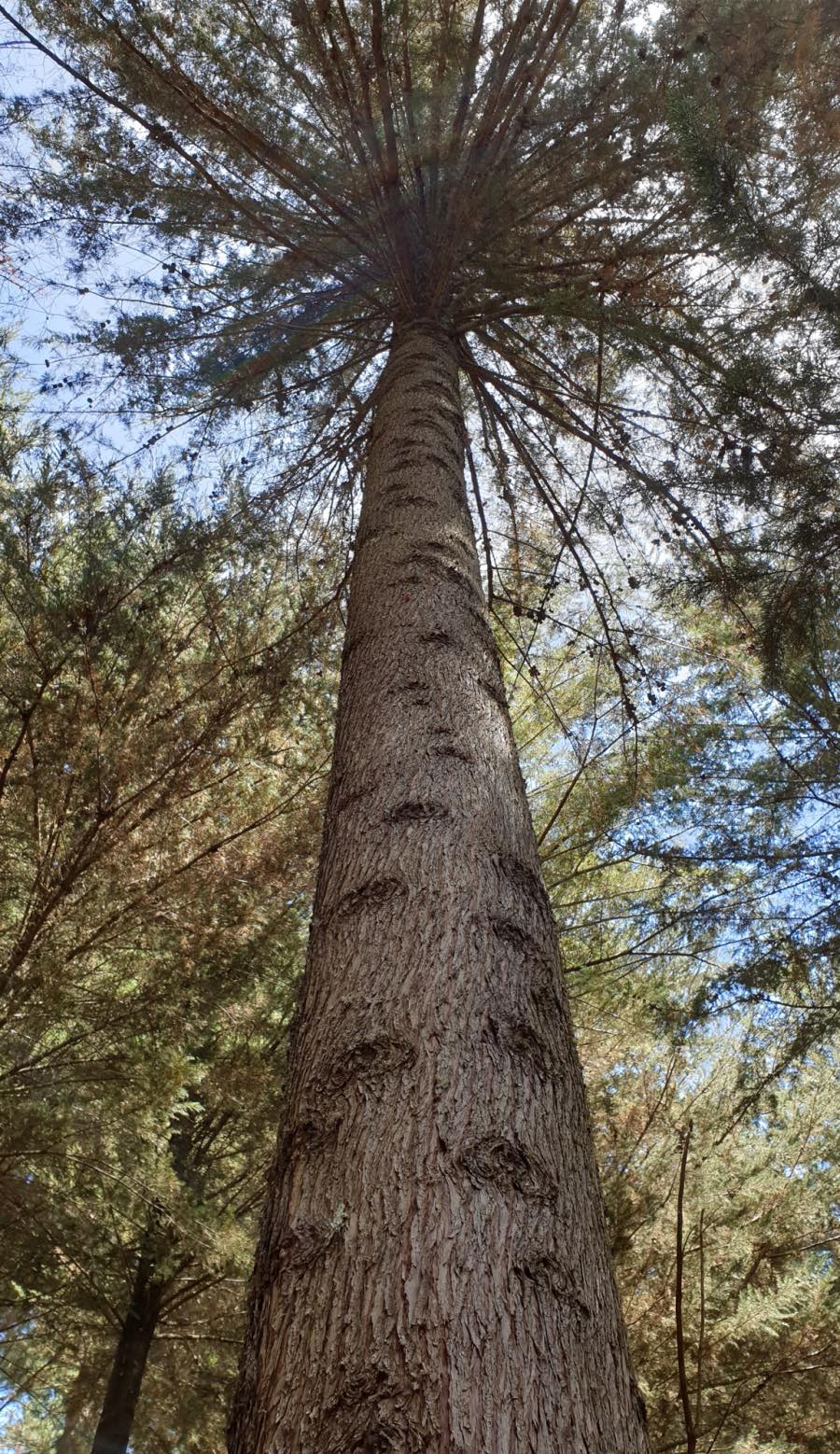 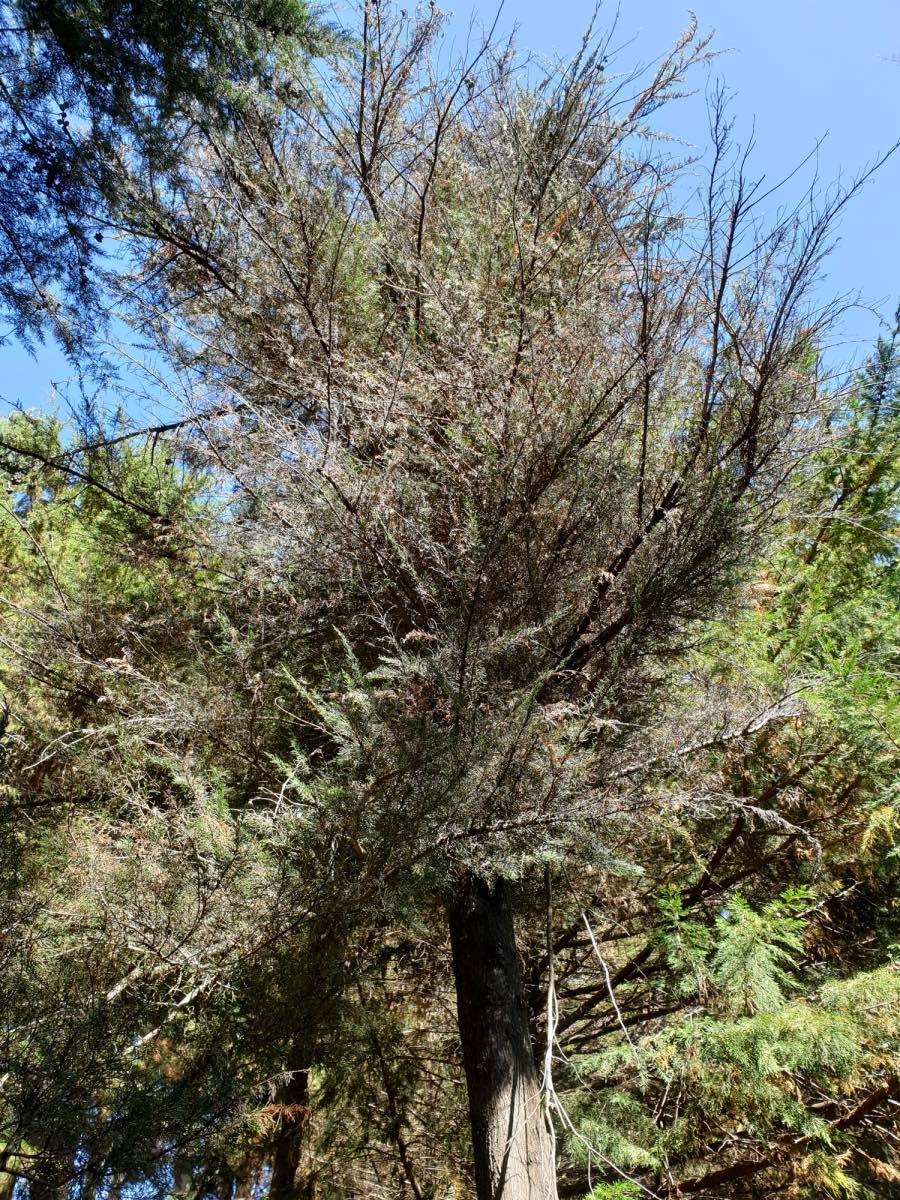 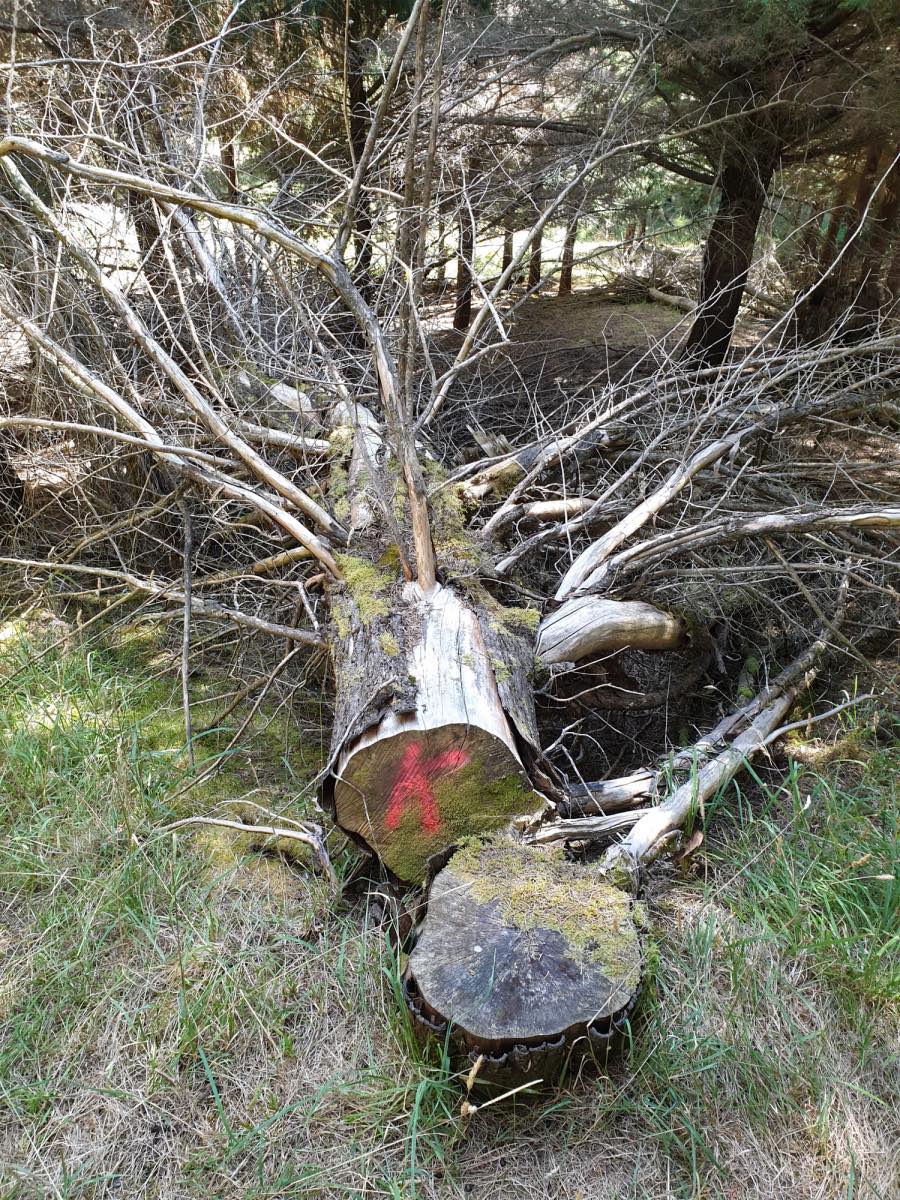 Kukupa where it should be.

Sound cypress heartwood contrasting with the rotten sapwood surrounding it. 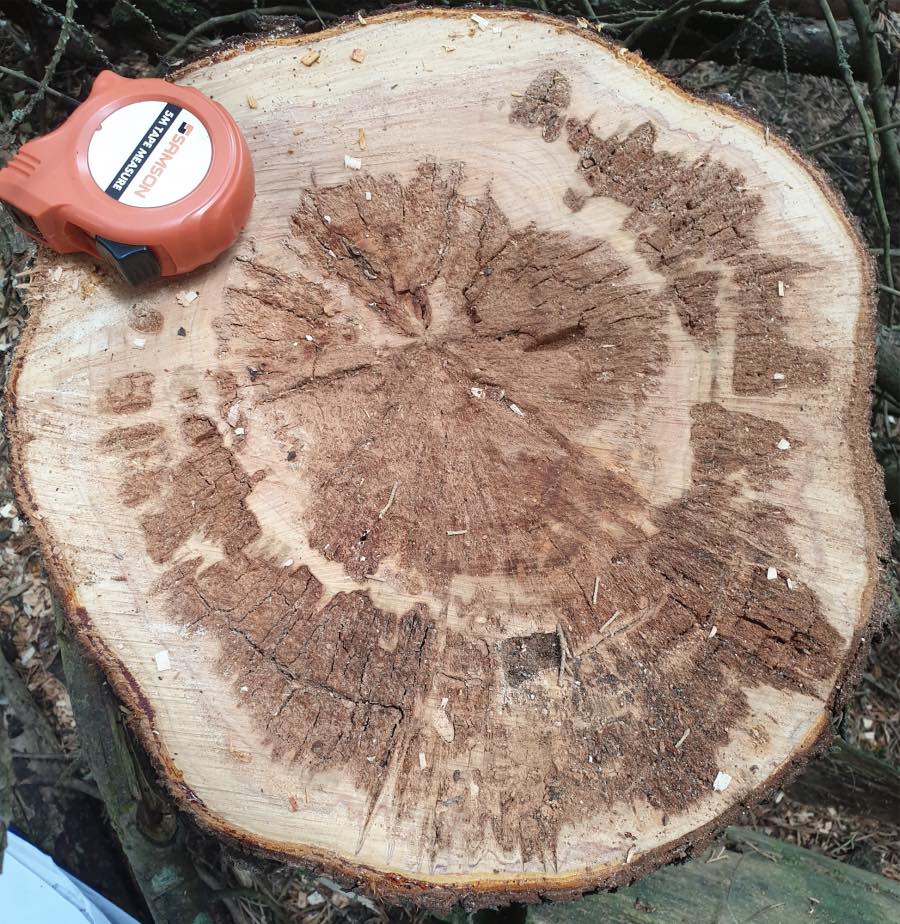